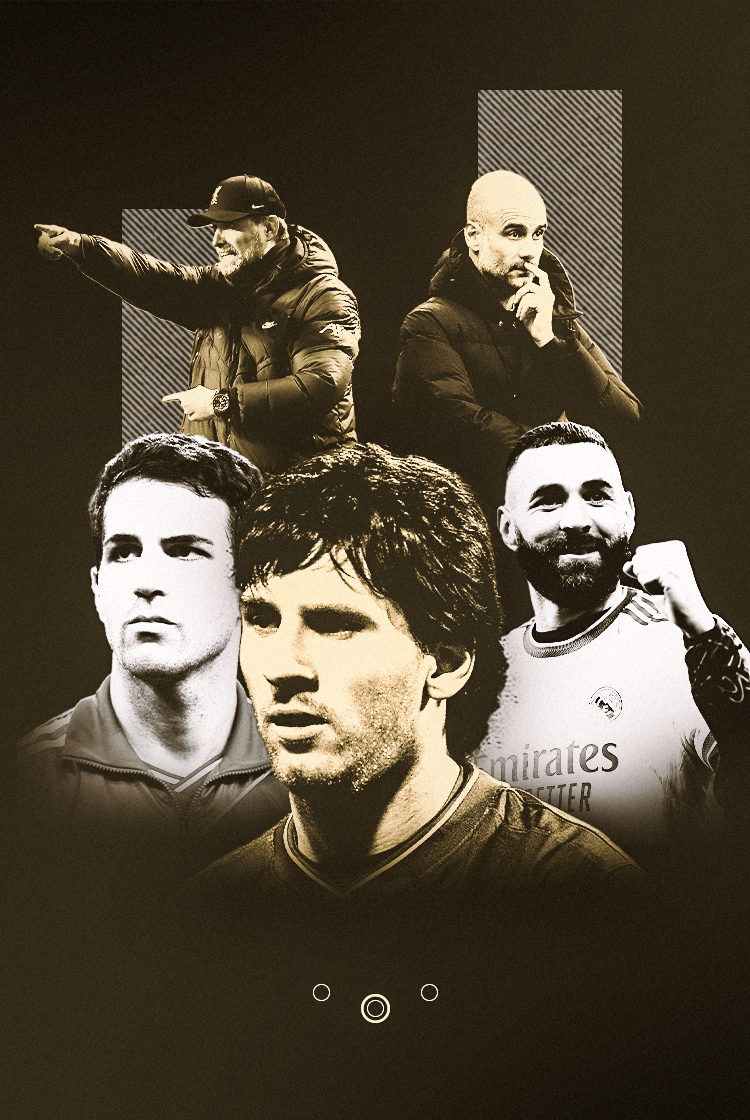 What is a false nine?
A false nine is a centre-forward who repeatedly moves towards the ball in deeper positions from a high starting position, often dropping to receive centrally. The main intention is to get on the ball away from the opposition centre-backs – and, in doing so, to draw players out of position and disrupt the defence.

Where does the term false nine originate from?
It is thought that the false nine was first used by Corinthians in the late 1890s. Then, centre-forward GO Smith preferred to supply the wingers with through balls and create for others. This was a shift from staying as high as possible, as was customary for the striker.

Further examples include at 1920s River Plate, whose centre-forward acted as what at the time was described as a “conductor” in a five-man front line. In the 1930s, Matthias Sindelar was used as a dropping centre-forward in the Austrian national side. Later, Nándor Hidegkuti and Péter Palotás were used in the same way for the renowned Hungary team of the 1950s.

'False nine' is a term that has only been used in more modern times, however. The idea is that the striker might have a number nine on their back but move into 'false' positions – that is, areas in which you would not usually find a number nine.

The first example of the false nine in a modern-day formation is Johan Cruyff using Michael Laudrup in the role at Barcelona – in a team that included Pep Guardiola, who later used Lionel Messi in the role (below).

What are the in-possession responsibilities of a false nine?
One of the most important responsibilities for a false nine is timing movements away from the centre-backs to receive between the lines, both during sustained periods of possession and as a link to the forwards during counter-attacks. This movement into deeper positions can give the opposition’s centre-backs a dilemma as to whether to follow the forward into midfield or leave them and stay in their slot. If the false nine gets their timing right, they can cause havoc.

A top-level false nine needs exceptional awareness and the ability to scan regularly. In this way, they know where to take their first touch to avoid any incoming pressure, especially from behind. This then helps them move into space to link with teammates.

It is also important for a false nine to be versatile, and possess on-the-ball skills such as quick turning, dribbling and playing through balls. That said, finishing – often under significant defensive pressure from a variety of angles – is still an important part of the role. Given a false nine will often have to catch play up again after coming deep to link, they also have to be adept at making quick, late runs into the penalty area before finishing first time.

What are the out-of-possession responsibilities of a false nine?
A false nine only really differs from an orthodox centre-forward when their team is in possession. Out of possession, they often perform the duties of a regular striker.

Their main defensive responsibility often comes via counter-pressing, adding another number in central-midfield areas to help force play out wide or create a numerical overload to win the ball back.

When defending for prolonged spells, the false nine often takes up a position as the highest central player. This means screening passes into the pivots or aggressively pressing the centre-backs.

Who are the best false nines?

Lionel Messi
Lionel Messi was famously used as a false nine under Guardiola, predominantly due to his ability to receive between the lines, turn and penetrate with his immense dribbling. Messi is exceptional at receiving on the half-turn; if he created himself even half a yard of space by dropping, he could then drive directly at the centre-backs. Alternatively, if he was followed by one of the centre-backs, he was able to dribble away from pressure and look for the wingers – often inside forwards playing on their ‘wrong’ flank – via through balls. These wingers started incredibly wide, before running into the space vacated by the pressing centre-back.

Cesc Fàbregas
Cesc Fàbregas was also used as a false nine with Barcelona under Tata Martino, and also in the Spain team that won Euro 2012 under Vicente del Bosque (above). Fàbregas was predominantly used there for his ability to receive under pressure and find a pass. Given how comfortable he was in central midfield, he also helped create significant overloads in the centre of the pitch. This gave his team more control during their build-up, as the opposition midfielders often dropped to cover Fàbregas’ positioning and block passes into him. From here, the likes of Sergio Busquets, Xavi and Andrés Iniesta – for both club and country – faced less pressure when they received and could dominate the ball through the middle third of the pitch.

Karim Benzema
Karim Benzema has demonstrated the attributes of a false nine at times throughout his career at Real Madrid, but particularly so under Zinedine Zidane. His dropping movements have also seen him move into wider positions, both when facing a deeper block and through incisive counter-attacks. His movements and ability to hold on to the ball and link play meant Real could find direct runs in behind from the likes of Cristiano Ronaldo (below) and, on occasion, Gareth Bale too.

Who else is an example of a false nine?
• Harry Kane under José Mourinho for Tottenham (below) and under Gareth Southgate for England
• Roberto Firmino for Liverpool under Jürgen Klopp
• Francesco Totti for Roma under Luciano Spalletti
• Carlos Tevez for Manchester United under Sir Alex Ferguson
• Michael Laudrup under Johan Cruyff at Barcelona
•  Johan Cruyff under Rinus Michels at Ajax
• Raheem Sterling, Ferran Torres, Bernardo Silva, Kevin De Bruyne and Ilkay Gündogan have all played the role for Manchester City under Guardiola.

What are the benefits of playing with a false nine?
The dropping centre-forward helps create gaps in the opposition’s back line. If the opposing centre-back presses, gaps appear for others – usually a wide forward or attacking midfielder – to make a penetrative run into. If the full-back narrows as the centre-back presses, space then appears to attack around the narrowed back line. If no defender presses, the centre-forward can receive and turn freely between the lines. If a central midfielder drops to screen the false nine, a central midfield teammate can then progress into the space they have left and pick a pass from there.

Also, having a false nine means there is no immediate central threat in behind the opposition’s back line, so there is little pressure on them to drop. This can also mean there is less threat from crosses into the middle.

If the opponents set up with three centre-backs, they can often manage the central spaces effectively against a false nine, even if one of the defenders follows them into midfield.