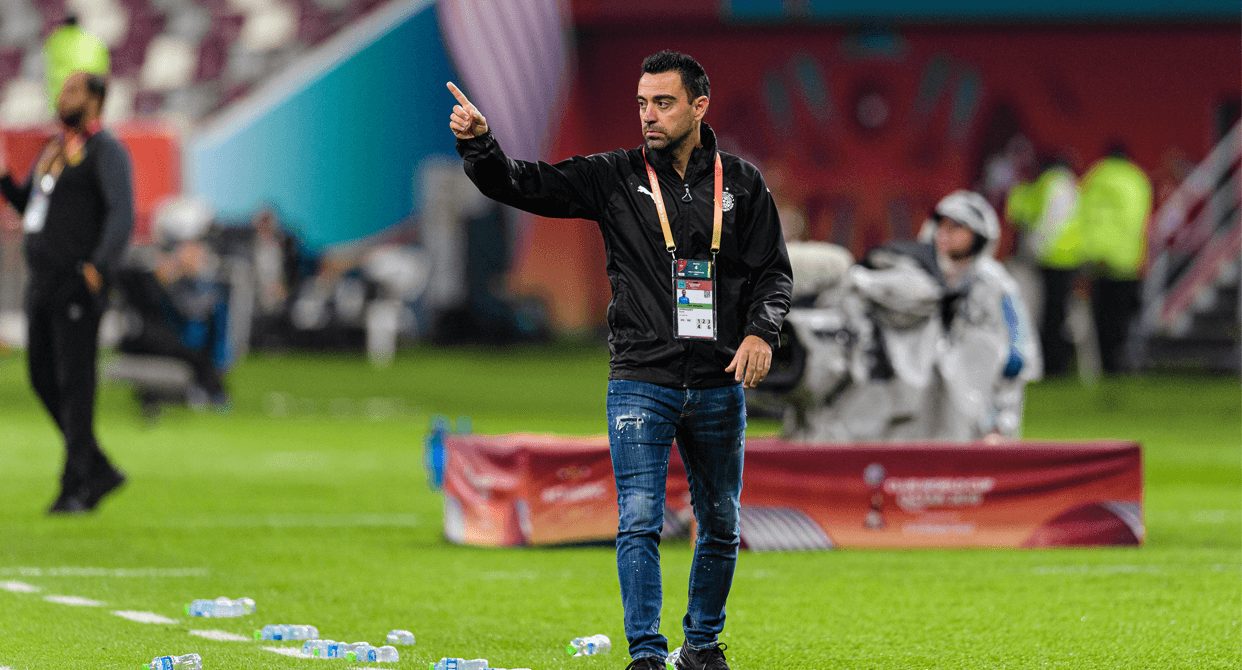 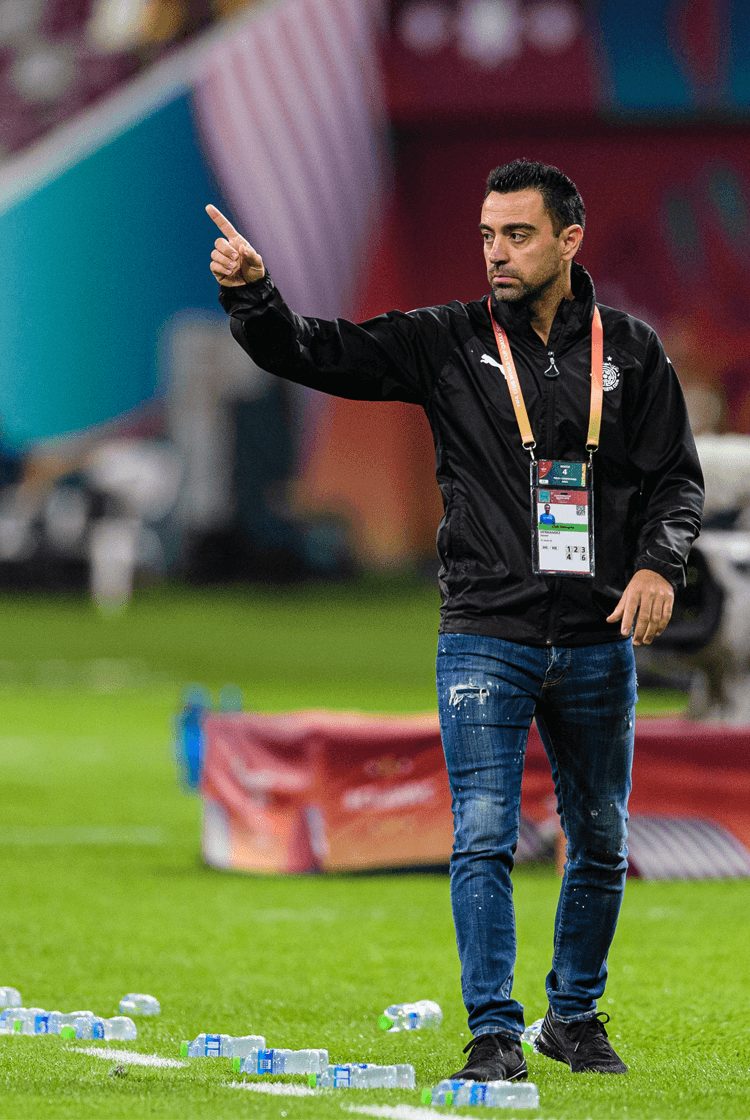 Profile
If Pep Guardiola was considered the long-term successor to the late, great Johan Cruyff at Barcelona, there are those who hope that Xavi Hernández will prove his. The retired midfielder, who while in Spain won not only numerous Spanish Ligas, Copas del Rey and Champions Leagues, but the World Cup and two European Championships, was reported to have rejected an offer to succeed Ernesto Valverde before Quique Setién's appointment, believing the time not to be right.

That Xavi was also close to the late Luis Aragonés, and worked under Louis van Gaal and in successful teams led by Frank Riijkard and Vicente del Bosque, before those particularly successful years with Guardiola, can perhaps be detected in his start to management. He prioritises communicating with his players in a one-on-one environment, ultimately in his pursuit of managing their personalities and their training sessions; his players' emotional intelligence is also as much a consideration as their technical ability, tactical awareness, and physical conditioning. “Pep has made us all better," Xavi said of Guardiola, who was also a predecessor in Barça's midfield. "He teaches you the reasons for everything; he communicates a lot. He has been the most influential person in world football in recent years.”

Playing style
Xavi's faith in attacking football is underpinned by the belief that the longer a team has possession, the closer to victory it will remain, but he also respects other approaches and has demonstrated an understanding that, during matches, his team needs to be able to adapt. Despite starting his coaching career attempting to implement a 3-4-3 structure, Al-Sadd have so far largely been organised into a 4-3-3 or 4-2-3-1, and adopted a 4-1-4-1 while they have defended in a mid-block, throughout 2019/20 averaging over 63 per cent possession in the Qatar Stars League.

If their opponents favour pressing with two strikers, Xavi’s team will remain in a 4-3-3; if they press with a front three, they will adopt a 4-2-3-1 to create the double pivot that means that they consistently offer an additional number behind that press and maintain an overload. During the first phases of their attempts to build possession, their two central defenders regularly adopt wide positions to encourage their full-backs to advance beyond those at the base of midfield and to increase the distance their opposing forwards need to cover. Even though a 4-3-3 became their nominal formation, those movements resembled the 3-4-3 Xavi first favoured, and the structure Barça also long used when playing out from defence.

To that end, Gabi and Woo-Young Jung became their focal points in central midfield, and were often targeted by their goalkeeper if a passing lane to their full-backs didn't exist. Gabi, Xavi’s compatriot, was particularly influential, not least when receiving possession with increased time and space. The responsibility for Al Sadd’s attacking and defensive balance was largely his. He was often the first player their defenders attempted to play possession to, and he dictated their collective tempo by executing numerous short passes to control, and often to calm, periods of play – or attempted more direct, penetrative passes through midfield to their attackers.

Santi Cazorla replaced Gabi upon the latter's retirement, since when Jung has been given an increased responsibility for influencing their tempo from the base of midfield. Cazorla's fluid, attacking movements contribute to their attempts to build through the centre of the pitch and, also similarly to the Barça in which Xavi excelled, their width is provided by their two wide forwards (below). Passes are played to between their opposing full-backs and closest central defenders, the closest wide forward makes a diagonal run to receive in behind – often when their striker is withdrawing into a deeper position – and the furthest one moves to operate as a second striker.

Cazorla’s influence in the attacking half means him regularly playing in one of Al-Sadd's front three upon receiving possession in a pocket of space through the inside channels. Jung and Guilherme, the central midfielders behind him, then move to provide cover and maintain their sense of balance – in preparation for their attack being negated – and support from behind Cazorla, who occasionally moves into an advanced central position as a number 10.

Xavi also instructs his full-backs to operate on different lines to their wide forwards – most commonly infield, to offer a further link between Cazorla and his front three. In the attacking half Akram Afif is similarly influential (below), owing to the individual quality that contributes to him beating opposing defenders and his creative and goalscoring threat. Switches of play between those full-backs are also used to stretch and test opponents and, should their attempts to advance possession via shorter passes continue to be resisted, possession is played directly to their striker, most commonly Baghdad Bounedjah, who in turn links with their wide forwards and those advancing from central midfield.

Pressing and defending
As did Barça, Al-Sadd attack and defend as a team; their positional approach demands that they quickly reorganise after losses of possession and attempt to recover the ball as soon as possible. A significant component of Barça’s philosophy when Xavi was one of their three central midfielders was their aggressive pressing and counterpressing to force misplaced passes and errors instead of direct duels, and attempts to create traps and force possession towards specific opponents or areas of the pitch with the intention of intercepting.

Xavi’s team also record far more interceptions than tackles. Their three central midfielders both individually and collectively advance to press on the front foot – particularly to cover the inside channels between their wide forwards and striker. A high press is applied if they are close to their opponents' goal, and others further back prepare to form the second line of that press if the first – one that works to direct pressure and adopt positions between opponents to discourage passes between central defenders or full-backs building play – is progressed beyond.

It is most commonly the responsibility of their wide forwards to press their opposing full-backs, and their striker to cover one central defender while pressing the other. Those wide forwards also commit to a more aggressive press by following their run towards the ball – particularly if possession is played backwards – and are often supported by the full-back behind them, creating a temporary back three that may even defend man for man against a front three.

An alternative approach involves an attacking central midfielder advancing to towards a central defender (above) when a bad pass, poor touch or individual error occurs during the first phases of an opponent's attempts to build possession. The two covering central midfielders position themselves between opponents to give them options about the target of their pressure, depending on the next pass played.

Xavi's team records a similar number of regains in the midfield third as it does in the defensive third, partly because of the influence of the high defensive line that advances to limit spaces between the lines and to support a high press. Should the opponent succeed in advancing beyond the first line of that, those further back aggressively engage, largely to delay further progress, and by extension giving the attacking players a second chance to pressure from behind those carrying the ball.

It is when opponents move both beyond the first phase of their build-up play and advance beyond the halfway line that their 4-3-3 becomes a 4-1-4-1 defensive block (above) intended to limit passing lanes and the progress those opponents have been making. When possession is regained, they are equally prepared to launch an attack, through their spatial awareness and the positions they adopt.