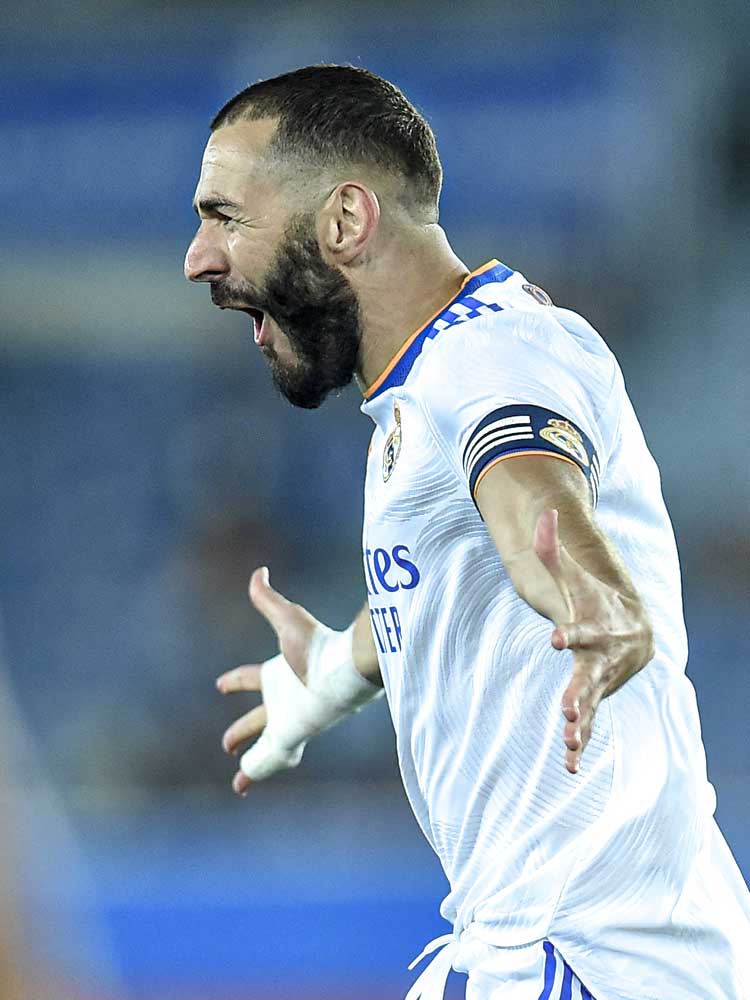 Profile
Since joining Real Madrid in the summer of 2009 for an eventual fee of £35.2m, Karim Benzema has arguably proved the shrewdest signing of a transformative transfer window in which Cristiano Ronaldo, Kaká, Xabi Alonso and Raul Albiol were among those who also arrived at Real Madrid. Ronaldo, who moved for a world-record £80m, became Real's most influential player in the nine years that followed until he left for Juventus, but since his departure it is the experienced Benzema, 21 when he first moved to the Spanish capital, who has been the most consistent figure in an attack that would suffer far more in his absence than it has in that Ronaldo.

"Football is not just about who gets the goals, look at Benzema," said Zinedine Zidane, who managed his fellow Frenchman across two successful spells at the Santiago Bernabéu. "He has a lot of quality and offers more than just goals. He's a team player."

Tactical analysis
Benzema is a striker who possesses a wide variety of finish and therefore scores goals of a similarly wide variety. His technique when he strikes the ball means him generating significant power without sacrificing accuracy, and doing so while superbly retaining his balance, enhancing that accuracy.

He mostly favours shooting with the inside of his foot (below) and targeting the corners of the goal, but there are also occasions when he drives his foot through the ball and it moves with such speed that goalkeepers struggle to react in time to save. That he requires minimal backlift also means him continuing to shoot with power, even when being deprived of space.

His positioning is a further, significant strength. Benzema rarely allows opposing central defenders to mark him and get tight to him, because he is constantly on the move. He shapes his body very well in response to the position of the ball in an attempt to face as much of the goal as possible, and in doing so can shoot early in attacks, often with his first – or, if the relevant pass needs to be controlled or taken away from pressure, second –  touch

Though not necessarily an obvious target for aerial balls, his ability to position himself away from potential aerial duels, and to reposition himself as the ball moves, means Benzema can also effectively attack crosses under reduced pressure. His final movements when attacking the ball are relatively simple – he holds his run to remain onside, then moves forward and relies on his leap and sense of timing to meet the relevant cross (below). It, regardless, is his ability to reposition himself as the ball moves between teammates that most impresses. When opponents are focusing on where and how possession is being worked into the penalty area, Benzema drifts away from his marker and into a new space to attack; he excels at moving to between two opponents already marking a teammate, remaining free, and then providing the finishing touch.

He is similarly successful at repositioning himself when he makes runs in behind. Waiting until opposing central defenders have moved from their defensive line or are starting to mark a teammate, he powerfully accelerates, often undetected, into space.

If not the player seeking to finish attacks, Benzema is also outstanding at linking play. Through withdrawing into central territory (below) or drifting wider – mostly towards the left – he can create goalscoring chances for both himself and others. His decision-making, and judgement over when to play early and off few touches or whether to retain possession and wait for those around him to make runs, is essential to that. Perhaps unusually for strikers who impress when linking play, he also then bursts forwards to contribute to his team's attack by offering support or even seeking to score.

Role at Real Madrid
Benzema has long led Real's attack in the 4-3-3 or 4-2-3-1 they have long mostly favoured. His movements towards the left provide a significant contribution to Real's attacking build-up; senior left-backs Ferland Mendy, Marcelo and David Alaba all seek to regularly overlap forwards around the particularly direct Vinícius Júnior who, where possible, seeks to penetrate in behind. Benzema contributes by offering passing combinations while drifting away from their opposing defenders (below) and providing the link into those in wide territory making penetrative forward runs.

Complementing his combinations and eye for a pass, Benzema also provides crosses from narrow positions and poses a direct threat at goal. Receiving across his body and on to his stronger right foot, he repositions himself to receive away from opponents, and occasionally even capitalises on doing so by shooting at goal from distance, potentially while moving away from the penalty area.

If Real have been organised into a 4-2-3-1, they offer attacking links on both sides of the pitch – their two defensive midfielders provide passes from deeper territory and cover from behind their advancing full-backs. Their number 10 drifts towards the right, into similar territory Benzema occupies towards the left, and, similarly to Benzema, combines with their right-sided forward and full-back.

Should Eden Hazard instead start towards the left, there exists a different link into Benzema. Instead of running in behind and providing direct movements, Hazard drifts across the pitch, often into the spaces Benzema vacates. He has also occasionally advanced beyond him and into a striker's position, and when he does so the Frenchman combines from close and plays passes while under pressure as his team attempt to play numerous short passes instead of the vertical, penetrative ones otherwise often seen.

Their more common 4-3-3 places an increased emphasis on Benzema to withdraw into central territory and to link play. With their two attacking central midfielders already occupying the inside channels – Toni Kroos, if selected, typically moves particularly deep – Benzema provides the link for the narrow runs being made from midfield.

The limited pace of Luka Modric and Casemiro means that neither regularly runs around Benzema, so either Federico Valverde offers a forward run through the centre, or Real's wide forwards move infield earlier. Benzema regardless continues to drift towards the left, from where Kroos often even withdraws sufficiently far to become their solitary defensive midfielder and, in turn, penetrative, off-the-ball movements and  runs in behind are made from the right in anticipation of linking with Benzema's fluid movements.