Profile
Having proved himself one of the Premier League’s best players of the past decade, Eden Hazard made the move to Spanish giants Real Madrid in the summer of 2019. Year upon year at Chelsea, under six different managers, teams were built to get the most from him – but he had a slow start in Spain, as he adapted to playing in not only a new system, but one in which he was no longer the main figure. Two separate bone breaks – one in his foot and another in his leg shortly after returning to action – appeared as though they might derail his entire first season at Real.

After 2019/20 was disrupted by the coronavirus pandemic, Hazard, back from his two serious injuries, was given a third chance to end his debut campaign on a positive note. More fitness concerns surfaced at the start of his second season, but he played something far closer to the crucial role he was signed for in the run-in to 2019/20 as Real won La Liga for only the second time since 2012. “We have to be calm with Eden,” said Real’s manager Zinedine Zidane. “He’s been off the pitch for a long time and you have to go easy on him. He’s had a few problems, but he will be fine again soon.”

Tactical analysis
Hazard is one of those wonderful footballers about whom everyone knows everything there is to know – and yet he constantly springs surprises. His dribbling is his greatest strength, but opponents struggle terribly to stop him without committing fouls. The challenge for his team, and indeed his manager, is how to get him into positions where he can isolate defenders and make use of that incredible dribbling ability.

He isn’t a winger who tries to get to the byline and put crosses into the penalty area – in fact, he is far less effective when he takes that route on to his weaker left foot. Instead, he prefers to come infield and find feet, fizzing a pass to the centre-forward before darting to receive a return pass or making a run in behind. He is a crisp passer who rarely misses his target, often because he has created enough space to make a pass following a quick move away from his marker.

The combination of Hazard’s low centre of gravity, the fact he takes so many small touches when running with the ball, his lightning-quick reactions and his powerful, explosive bursts from a standing start make him one of the planet’s best dribblers.

He is a master of manipulating his opponent’s body position in one-on-one situations. He draws a player towards him before using the defender’s momentum against him by changing direction quickly. Doing so makes him almost as dangerous when he has his back to goal as he is when facing his opponent. He is exceptional at shifting his opponent’s body weight on to one foot, leaning in that direction to further deceive the defender and exploding in the opposite direction. It is a minor detail, but one that sets Hazard apart from many of Europe’s other top dribblers. 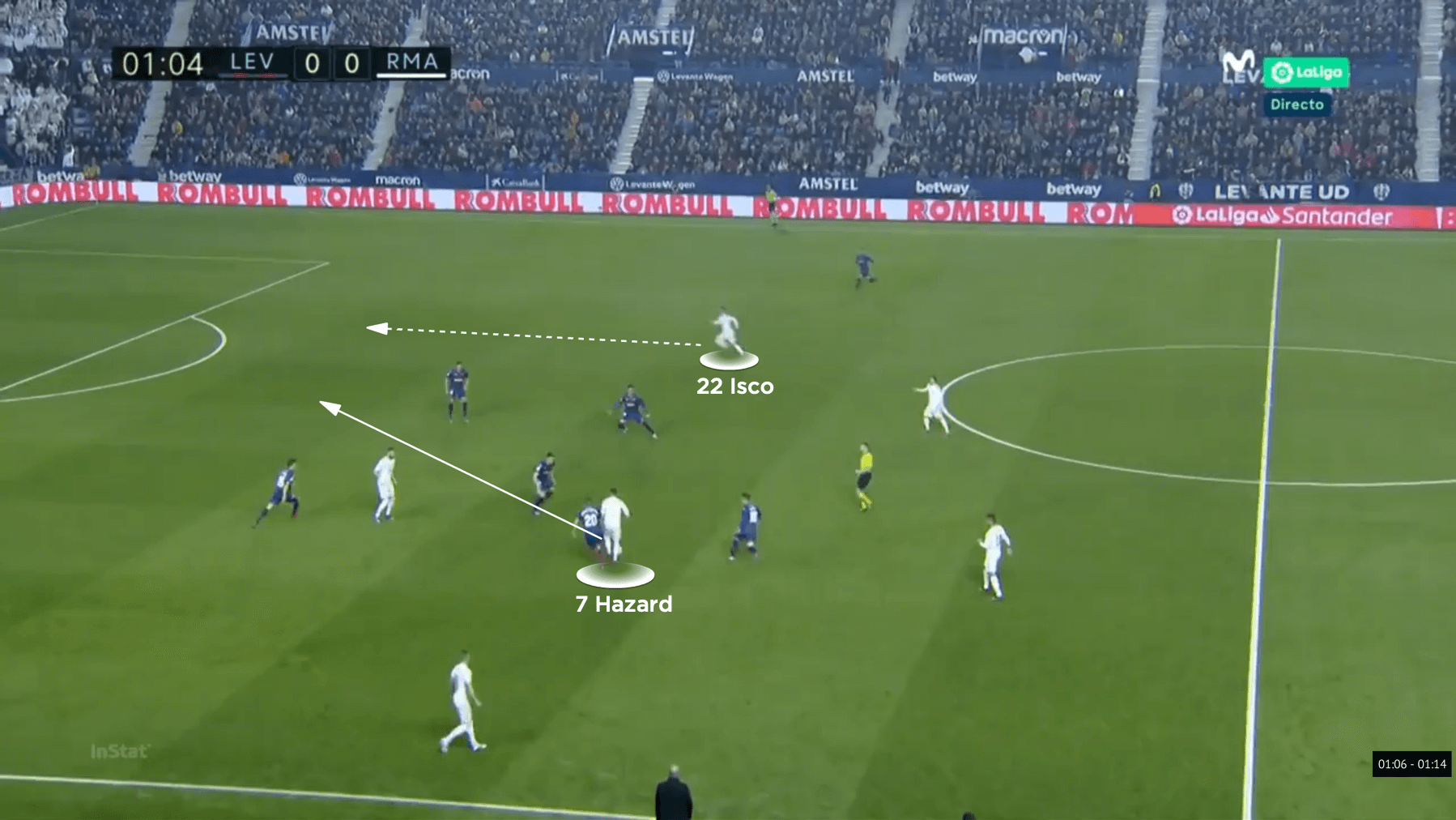 He is almost impossible to read or predict. Defenders who get close enough to try and make a tackle invariably lose their grip on him and rarely manage to stop him legally. For years he was the most fouled player in the Premier League – and he is now winning more free-kicks than ever before. In his first season in La Liga, Hazard was  fouled 3.1 times per appearance – a higher rate than in any of his seven seasons at Chelsea and the third most of all players in La Liga. He is as difficult as ever to halt.

One aspect of Hazard’s game that does not garner as much praise as it should is his passing. He is a selfless attacker who creates far more chances than he attempts himself, and he often shows exceptional vision and ability to first spot and then execute a pass – as he did, for example, to put Isco through on goal in the early stages of Real’s defeat by Levante in February (above).

As he tends to dribble with the outside of his foot and take lots of touches, he then needs very little backlift when executing a pass. Not only that, when he dribbles, he is constantly looking up to assess his surroundings. Given he will likely beat a defender if they try to tackle him, opponents usually stand off him – but Hazard has the passing ability and vision to cause problems in other ways. That is not a skill that many particularly associate with the Belgian, but it is a significant part of what makes him such a dangerous attacker. 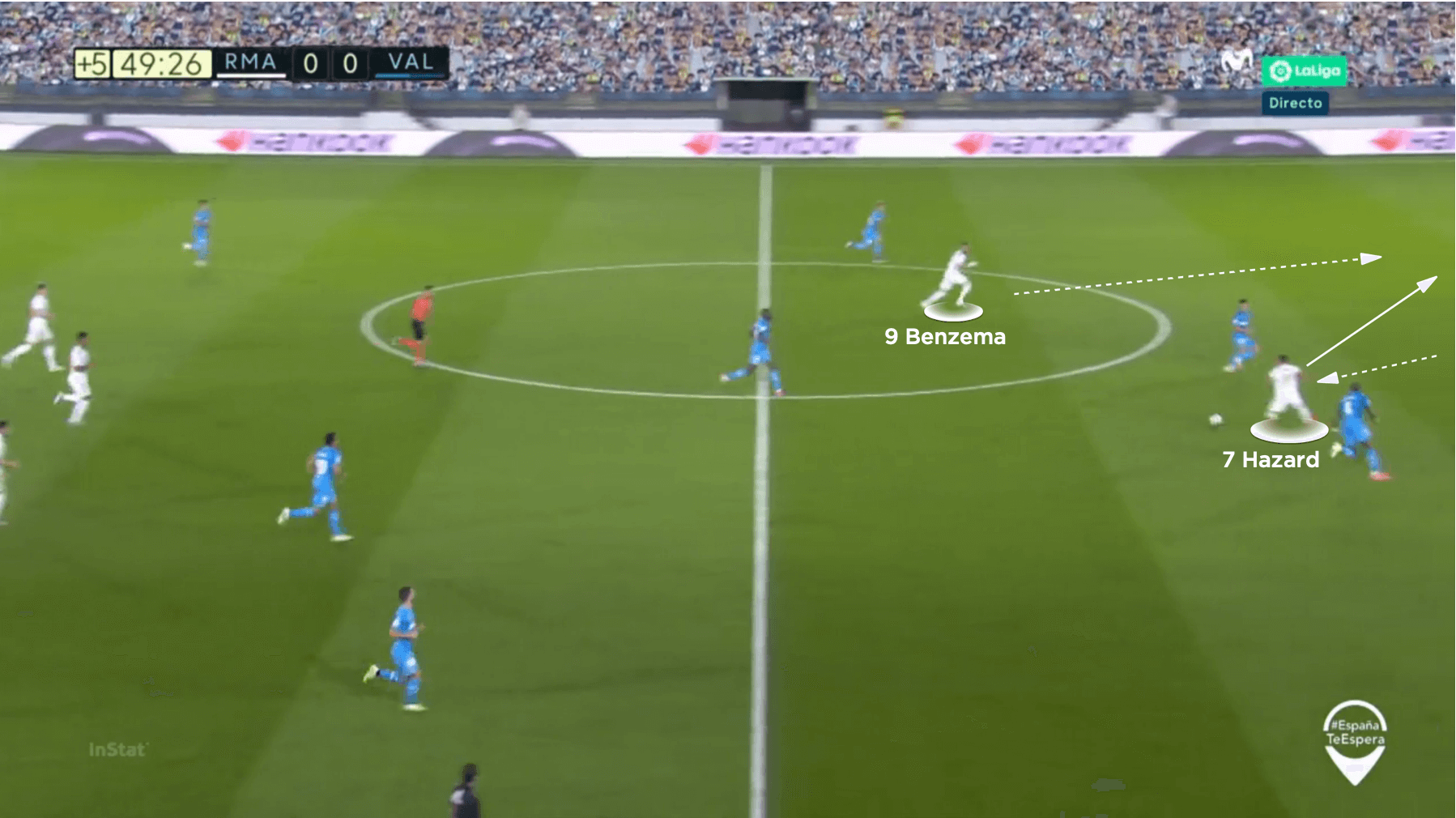 Role for Real Madrid
As was the case at Chelsea, Hazard has usually started on the left at Real, but he has often been given more of a free role – so much so that he has even started in the number 10 position and essentially played as a second striker behind Karim Benzema (above).

He has developed a good understanding with Benzema, for whom he has proved the perfect foil. At 32 years of age, and in his 11th season at Real, Benzema ended 2019/20 with the second-highest league goals tally of any season in his career, scoring 21 times.

Zidane’s is often characterised – rather unfairly – as a counter-attacking team when there is actually far more to Real’s game. They are very comfortable in possession and often build up play slowly. In Raphaël Varane and Sergio Ramos, they have brilliant ball-playing centre-backs, and Toni Kroos and Luka Modric are two of Europe’s best passers in midfield. They have improved markedly under Zidane when it comes to breaking through low-block defences. 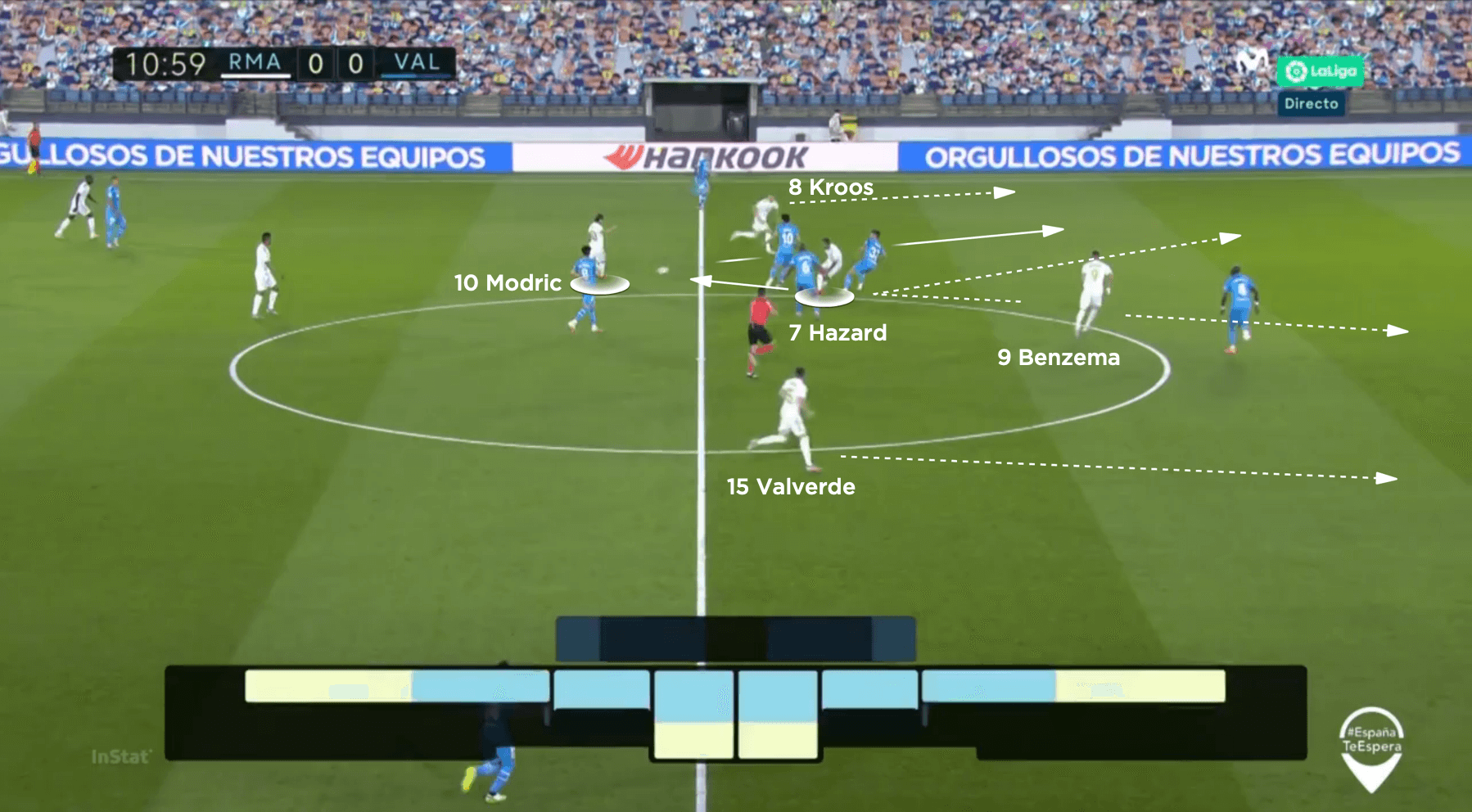 They regardless remain lethal on the break, and Hazard’s ability during transitions will have been a significant reason Real decided to bring him to the Bernabéu.

With his sharp movement at the point of a regain of possession, Hazard does a great job of pulling opponents out of position when they are already at their most disorganised. As the player who provides Benzema with his closest support, he will often make those movements away from goal to set a pass to a forward-facing teammate who can then feed midfield runners who burst beyond Hazard (above). The Belgian is so quick himself that he then turns and sprints to catch up play and adds another number to their attack. He can, all on his own, turn defence into attack in the blink of an eye.

Hazard showed at the end of an injury-blighted first season in Spain how important a role he can play for Real, and with a consistent run of games he can get back to his best. There are positive signs that he can make his move there a success. 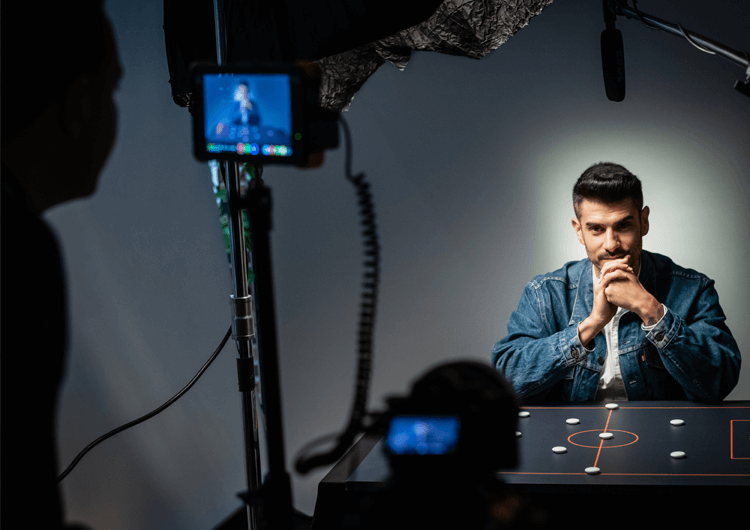 Álvaro Benito’s influence at Real Madrid won him the admiration of Raul. In his second Masterclass, he explores the principles he employed with their academy 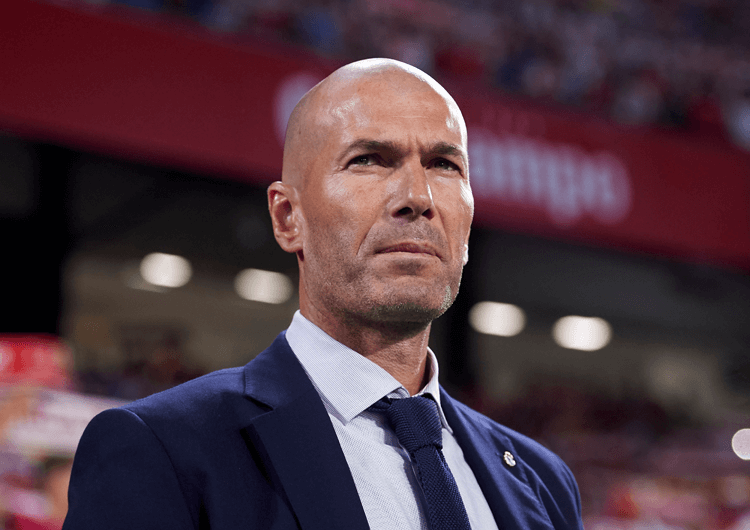 Zinedine Zidane has rejuvenated Real Madrid since his return to La Liga. Our professional coaches assess the methods that inspire their success 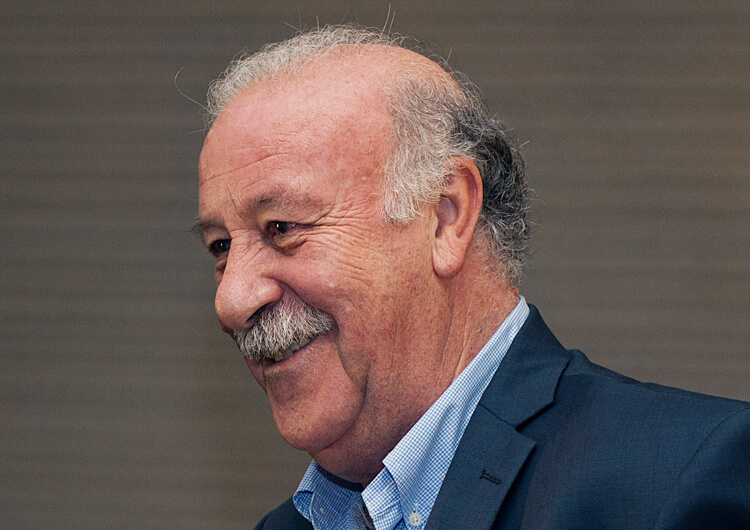 We had serious issues