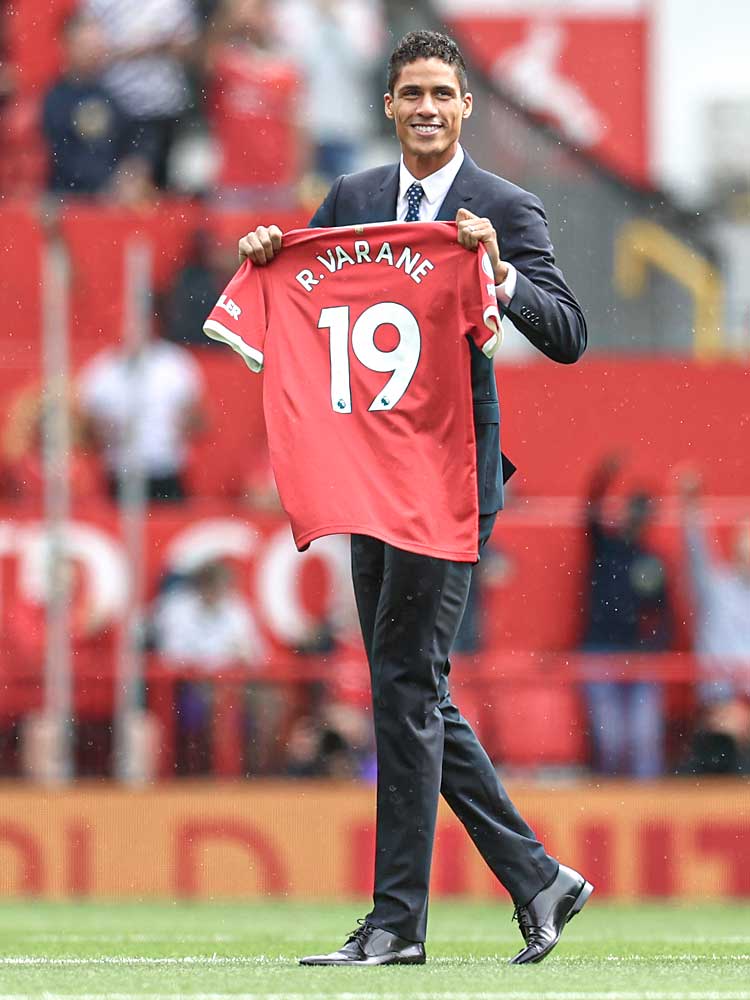 Profile
Manchester United broke the world record transfer fee paid for a defender when in 2019 they invested £80m to sign Harry Maguire from Leicester, but it is perhaps not since 2002, when they paid a then-world record £30m for Rio Ferdinand, that they signed as proven a defender as Raphaël Varane. At a cost of a potential £42m when, aged 28, he moved from Real Madrid in August 2021, the France international also represents, by the standards of the modern era, admirable value.

"I'm absolutely delighted that we have managed to secure one of the best defenders in the world over the last 10 years," said United's manager Ole Gunnar Solskjaer. "Raphaël is a proven winner who we have tracked over a long period of time and we know just how much of a dedicated professional he is."

Tactical analysis
Varane is a right-footed central defender who offers a particularly versatile approach to his ability to defend. He is as convincing when tightly following opponents who move to receive to feet in midfield – and then using his physicality to keep them there by defending from behind them, taking them off balance and contributing to errors they make on the ball – as he is when opponents instead drift wide.

It is perhaps only a habit of occasionally mistiming challenges when those same opponents turn infield to take their first touch (below) that has stopped him truly fulfilling his undoubted potential. When they keep their back to Varane, he is consistent at defending against them in both directions.

That same consistency applies to when he is required to defend in the air, where he regularly wins the first contact. He, similarly, impresses when following attackers who move to flick play on by staying tight to them without committing fouls – a time when defenders often risk conceding free-kicks through being clumsy, overeager, struggling to slow down, or mistiming their jump. Varane is good at each, in the same way he can command his defensive line as the first defender and effectively moves out of position to challenge in the air elsewhere.

If he is instead operating as the secondary defender and therefore covering a teammate, his acceleration makes him capable of matching most opponents. He can move to cover from behind the full-back alongside him (below) and then follow his opponent along the touchline as effectively as he can cover behind his central defensive partner, and then either secure possession or clear. If covering to his left, it is the safer option he favours.

The decisions he takes when he offers that cover are regardless determined by the nature of forward pass played by the relevant opponent – if a ball is played in behind from range, Varane seeks to, as quickly as possible, get his body between the runner and ball, and then to secure possession, most commonly by playing it to the goalkeeper behind him. That anticipation is central to the level with which he performs, and also applies to when he is covering runs in behind having moved early by correctly predicting the pass, instead of watching and needing to react.

Complementing that ability to defend, Varane is an accurate ball player. With both feet he can deliver long-range passes (below) – he is particularly comfortable when doing so from the right inside channel – and of switching play. His favoured technique involves him stabbing the ball from underneath to deliver back spin without sacrificing the necessary height, but he can also drive through the ball and therefore ensure a flatter delivery over a longer distance, albeit potentially at the expense of some accuracy, as also applies when he is targeting a teammate on the move instead of one who is relatively static.

Role at Real Madrid
During 2020/21, Varane was paired with several different central defenders, usually as the right-sided central defender, though towards the end of the season he also played on the left. Sergio Ramos, Éder Militão and Nacho were selected alongside him, and he adapted well to playing with those different partners. While an all-action defender who regularly posts impressive numbers for defensive actions, he defended in a disciplined manner, and rarely conceded fouls.

When paired with Ramos, Varane played with a covering defensive style, because of Ramos' aggression in the first contact and desire to regularly push up to attack aerial balls. He also provided the secondary cover when Real defended against counter-attacks by adapting and repositioning to cover from behind Ramos.

Varane adopted a similar approach when paired with Militão and when the Brazilian contested aerial duels, but Militão is much faster than Ramos, so when balls were played over the top the Brazilian was often the one who tracked back. When paired with Nacho, however, Varane often pushed out to attack aerial balls (above), owing to Nacho's relative ineffectiveness at competing for first balls and comfort when defending in a set back line.

Real also used different players at right-back – Dani Carvajal, Álvaro Odriozola and the more attacking Lucas Vázquez all vied for selection under Zinedine Zidane. Varane was often required to move across and to attack aerial balls that targeted their area of the pitch, and therefore often started closer to his full-back in preparation for any attacking play in that direction.

With Real’s full-backs also advancing to attack, Varane, similarly, frequently covered those same wide areas himself, protecting inside and in behind their right-back. Against counter-attacking play that looked to capitalise on the high positions of Real’s full-backs, Varane often showed his anticipation by moving across early enough to negate potential danger. Him doing so proved even more effective whenever Casemiro or Toni Kroos withdrew into their defensive line as they built possession, because their movements encouraged Varane further towards the right, from where he was perfectly positioned to cover behind their right-back and either delay attacks to allow teammates to recover into position or to aggressively defend when his opponent was more positive.

The defensive presence Casemiro provided in central midfield also proved key against sustained possession, especially when covering between the lines in a mid-block – often in a 4-1-4-1 (above). The opposition’s forwards often moved away from Casemiro, so Varane then became responsible for moving out to contest balls into the right inside channel.