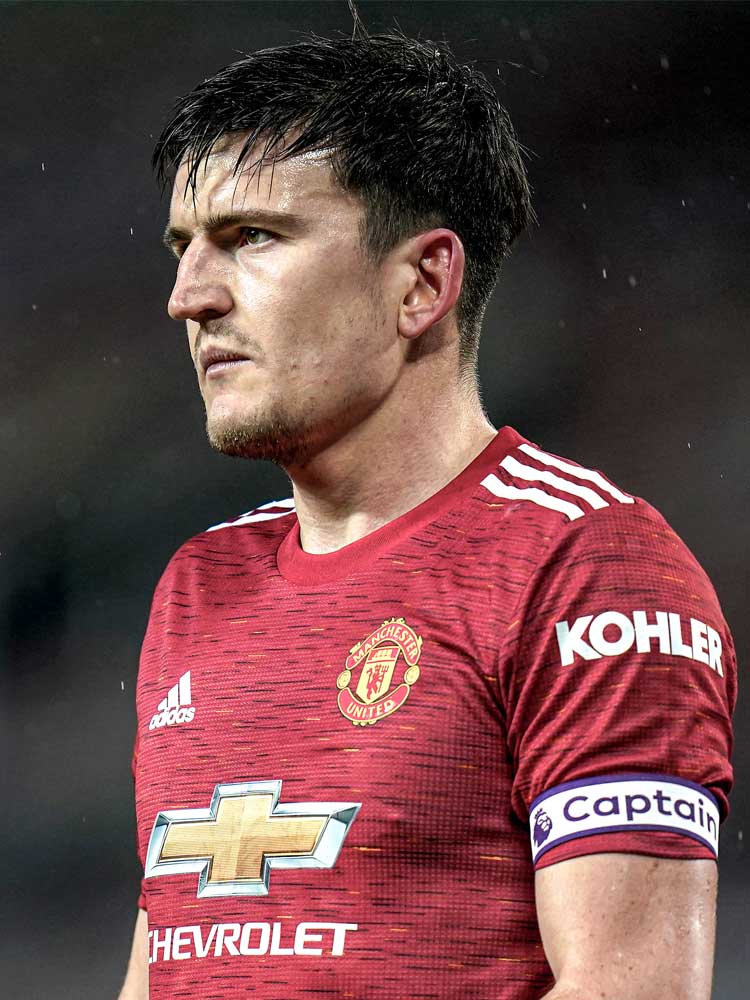 Profile
Harry Maguire once represented an unlikely potential solution to what had been Manchester United’s vulnerable defence. A club that had previously recruited some of Europe’s leading defenders – Rio Ferdinand and Nemanja Vidic formed one of the Premier League’s finest ever central defensive partnerships – instead targeted an individual who first established himself in League One.

It was at Sheffield United where Maguire started playing regular first-team football, and it was former Manchester United captain Steve Bruce who was responsible for first taking him into the Premier League in 2014, when he spent £1.5m signing the then 21-year-old from Hull. Relegation back to the Championship was followed by an immediate promotion and a further relegation, but in that time Maguire sufficiently impressed Leicester, who paid £17m to make him the focal point of their defence.

Maguire’s subsequent rise might have surprised some observers, but it has been built on an ability to respond to every challenge he has faced; he adapted to Hull, then to Leicester, and then most significantly with England as they reached the semi finals of the 2018 World Cup. That United coach Mike Phelan worked with him at Hull will have contributed to his move to Old Trafford, but he has already made so promising a start there that he has since been appointed captain.

Tactical analysis
The 6ft 4ins Maguire is capable of being an immensely dominant central defender, largely owing to the strong frame and powerful movements that make him so impressive in the air. If that makes him a particular strength against direct opponents, it also makes him an asset at both attacking and defending set-pieces. He provides excellent protection for goalkeepers potentially struggling with imposing strikers – particularly under deliveries close to goal.

During open play he increasingly remains on his feet to defend, instead of going to ground with the consistency he first showed as a professional. When blocking attempts on goal, that upright stance creates a larger barrier, though he is still tempted to slide in on those running in behind. Preferring to defend on the front foot, Maguire has the pace to match most runners stride for stride and to then make the crucial block, or edge them away from goal, without breaking his running pattern.

He instinctively often advances towards the ball or relevant opponent to nullify any potential attacking threats as quickly as possible; his timing is a strength, and complements that desire to be proactive, but if he doesn't succeed and then leaves a space behind him, high-quality opponents will take advantage of that space. Physical strikers, similarly, can benefit from those instincts through rolling past Maguire or linking with teammates to combine beyond him.

When he is defending against deliveries from wide areas (below), he positions his hips and upper body towards the ball and feels his opponent with his arm instead of attempting to see that opponent, encouraging him to prioritise the relevant delivery. That preference only becomes a weakness if the ball is whipped low and between Maguire and the goal and if his opponent succeeds in moving across and in front of him.

Maguire is more comfortable blocking attempts towards his right side than with his left, where he can similarly still be vulnerable if an opponent cuts across him – something that becomes magnified by an attacker disguising a shot or turn and moving explosively. His decision-making and timing when sliding across to cover his central-defensive partner is a further strength, owing to his ability to sense the extent of the danger and to understand when he can leave his direct opponent. Increasingly influential alongside a defender who has been drawn out of position or a loosely organised full-back, he is also improving during moments of defensive transition.

Much of his reputation is rightly built on his confidence in carrying possession into midfield (below). At a club with United's expectations, it is often inevitable that the majority of even their defenders' actions come while in possession. Maguire favours simplicity with the ball, most commonly playing sideways or backwards passes to another defender or his goalkeeper, an aerial ball to a wide player, a diagonal pass to his left-back, or dribbling forwards. He rarely plays straight aerial balls – diagonal passes behind opposing defenders, encouraging those in front of him to receive possession while facing the opposition's goal, are his preference.

He is less consistent when attempting to recycle possession; his distances vary and, if he is positioned too close to an opposing attacker, the pressure that that represents can contribute to him rushing his next action. There are regardless times when inviting that pressure – to create space for himself or a teammate – is deliberate. He also otherwise shows admirable composure while in possession.

His confidence can contribute to him getting caught on the ball – that he isn't particularly light on his feet can mean him struggling to move them with sufficient speed, even if he uses his body well to protect it. Those drives forward also usually come on his right, limiting his angles of approach and potentially making him vulnerable if pressed on to his left foot or if passing options on his right are blocked, but, with time and space, he is far more effective. He continues to relish spaces to drive into, and by extension forcing opponents to adopt a more compact shape before playing one of his favoured passes.

Role at Manchester United
A lack of stability and therefore clean sheets throughout 2018/19 meant it became a priority for United to strengthen their defence, which they attempted to do by recruiting Aaron Wan-Bissaka and Maguire. A natural fit for a central-defensive role in both of Ole Gunnar Solskjaer’s back-four and back five systems, he has demonstrated with England that he is also comfortable in a three. In a four he has been their left-sided central defender; in a five he has been the most central of the three.

His aerial presence (above) has already strengthened that defence, especially against wider build-ups. Not only does he frustrate aggressive strikers, counter-attacks can be started by his clearances; if he improves that further by guiding those clearances to teammates instead of simply with height and distance, he will become even more valuable. Those aerial abilities also make him influential at set-pieces. If attacking one, he remains away from crowded areas to instead run and build momentum before approaching the ball, and via a run in a central area or between the penalty spot and back post.

When defending corners Maguire's role is zonal. He positions himself centrally, on the edge of the six yard box (above), and doesn't take an opponent because his priority is to attack the ball. He also regularly succeeeds in making the first contact with the ball, but, on occasions when an attacker loses his defender and makes a run of front of Maguire before reaching the ball ahead of him, United have been at risk of conceding.

If one of three central defenders in United's back five, Maguire’s central position often opens up more spaces outside for the pass into the relevant full-back or wing-back than when they are playing with a back four. When United are without possession he plays similarly whether in a back five or four; when following an opposing attacker in a back five, however, he has more cover.