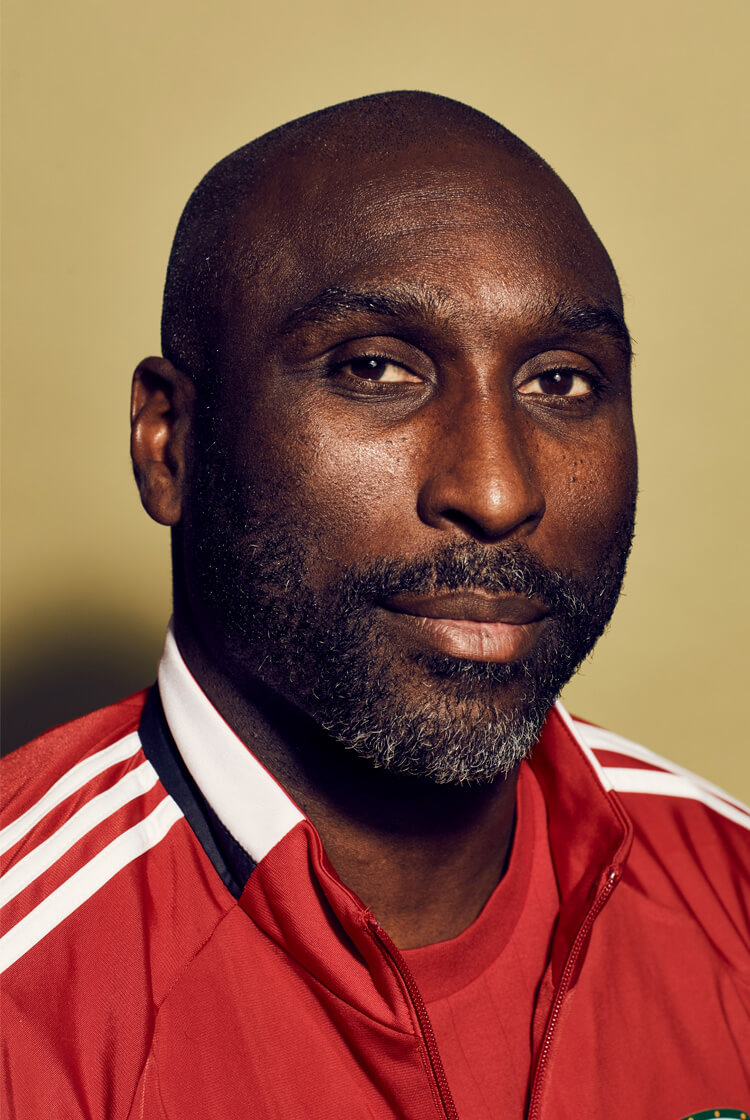 Wherever you go, you can find a gem who is fighting the system and just needs someone to help get them out.

Growing up in east London, I was one of those people. I saw plenty of others like me as well. I’m just one of the lucky ones who managed to get out.

That doesn’t mean I don’t have problems. There are positives and negatives in every walk of life – you just have to find a way around the negatives to get to where you want to be.

You need a strong mentality, because you’ll get knockbacks. You might need a bit of luck too, but if it’s worth fighting for you have to go for it.

I learned all that very quickly – even before I got into football.

When I did start playing, football became my outlet. I was kind of shy as a kid, but the game helped to bring a lot out of me.

So I learned to approach the game in a different way. It wasn’t so much about strength, but stealth and determination.

Although street football gave me that good grounding, getting away from London when I was 14 worked really well for me. I was part-schooled at the FA’s School of Excellence at Lilleshall, where the desire and hunger that I naturally had could be nourished.

Lilleshall was a haven for excellence. Cricket, hockey, gymnastics, table tennis – they all sent their best young athletes to train there.

It was the first time I’d really spent time in the country. I remember being surrounded by an abundance of lovely gardens and instantly feeling that those things connected with me.

Some kids went there, and within a month they were homesick and wanted to leave. I never felt that. By the age of 14, I was serious about my sport – and it felt like everything about that place married with my psyche.

It was four years later that I made my senior debut for Tottenham, when Terry Venables brought me on for the last 20 minutes against Chelsea at White Hart Lane. It’s difficult as a youngster – you’re anxious and excited but, coming off the bench, you haven’t got the pace of the game.

I managed to score, though, so it was almost the perfect debut – apart from the fact we lost 2-1. I remember coming off afterwards with my chest all blocked up, full of whatever it gets filled with, and my throat so dry I had to drink a ton of water. All that after just 20 minutes!

It’s a beautiful time in a young player’s journey. But, for me, it wasn’t quite the start I was hoping for. After that game, I wasn’t seen again for the rest of the season.

It was Ossie Ardiles and Steve Perryman who really gave me an opportunity at Spurs, after they saw me play for England in the 1993 Under-18 European Championships. We won the tournament and I was looking forward to a few weeks’ holiday when my phone rang.

They wanted me in the following week.

Previously, I’d had managers who’d seen talent in me but didn’t want to take the risk on a young kid. This time, it was “in you go” straight away. They coached me and nurtured me. Really believed in me.

A few years later, I got my first taste of being a leader. I was still young – 21 or 22 – when Gerry Francis, who was the Spurs manager by then, called me into his office to ask if I wanted to be captain.

As I walked out, I was thinking: I’m going to have to order guys around who are 10 years older than me. Guys I was probably taking the captaincy away from. But I looked at myself and said, well, I’m playing all the time and I understand I’m not the club captain. Just the captain for the field.

"In Arsene Wenger, Arsenal had a manager with a philosophy I was looking for"

The team had good faith in me. I guess they saw my ability and how I conducted myself, and knew how serious I was about the game.

A few years later I was made club captain, but even then I was mostly a captain playing-wise. I wasn’t the kind of captain who organised parties or wanted to be at the centre of everything away from the pitch.

I wanted to get to the centre by the shortest distance possible. I don’t want to go left. I don’t want to go right. I want to get straight to the middle. And the only thing I could control in my sphere was being captain on the pitch. Being determined. Encouraging others to follow my lead. And that was the kind of captain I became – very vocal and very strong in the games.

It was an honour for me to captain Tottenham, but I knew I wanted more. I wanted to win.

Arsenal was a team with fantastic players, a settled system and, in Arsene Wenger, they had a manager with a philosophy I was looking for. The way he thinks and looks at the game isn’t for everybody, but for me it was easy to connect with. It was easy for me to play his style of football.

That way of thinking was already within me. That’s why we excelled as a team – because we were all on the same wavelength.

Arsene’s approach with the back four was to focus on the block as a unit – he’d put in a system, but individually it was up to you. He wasn’t relying on you to be quite the finished product, but to be almost there.

It’s a bit different now, but in those days you had to kind of figure things out. I think the best players do that, to an extent.

If they play a season or two as a youngster, they work it out very quickly and understand what deficiencies are in their game. They’re on the fast track.

Others take a bit longer and need more guidance to make it to the top.

"If you can see things in players, that makes you a better manager. It also makes them a better player"

I wanted my own career to go on as long as possible, but eventually you start to realise that the miles on the clock are too high. The aches and pains are there when you wake up in the morning. The old injuries just won’t go away. The routine of getting ready for games and travelling takes its toll.

You ask yourself, is this just a phase? Will I feel alright again in two or three months’ time?

At the age of 37, I still enjoyed the challenge. When some youngster is trying to chase you down and you’ve still got it, it’s nice to think: “Imagine when I was 25. You would not be in my league.”

When I did retire, I wanted to get back into England. I had my B Licence and was keen to get involved on the coaching side. But at that time there were only one or two positions up for grabs. England wasn’t set up for ex-players to come in then – not like it is now.

It took me another three and a half years to get my Pro Licence with the Welsh FA. Five years of work, altogether.

For what? Because I’m a competitor. And I want to compete again, just in a different way.

I’ve got the qualifications, but you need more than that. Along with the knowledge, you also need to know how to communicate. How to inspire. You need to understand the intricacies of human behaviour. Understand moods and how to bring people together.

Someone might come in to training with a bad attitude or upset over something that has happened at home. You need the tools to know how to help that person. If you can see things in players, that makes you a better manager. It also makes them a better player.

Competition for jobs as a manager is fierce, I know that. So how do you get that first opportunity? I’ve asked myself that a lot.

One thing I know for sure is that I want to be in that environment – win, lose or draw. I want to build a new career. I want to compete again.

Yes, I’ve had knockbacks. But if it’s worth fighting for, you have to go for it. I’ve always known that.