Daniel James has excelled in the Premier League since his transfer to Manchester United, from Swansea, during the summer of 2019. That he was only 21 when he moved to Old Trafford for the relatively modest sum of £15m meant that he was widely expected to be a player for future seasons — that as was seen when United’s manager Ole Gunnar Solskjaer was an influential player under Sir Alex Ferguson, he would be given time to settle before being tested at the highest level.

He has instead not needed it. James scored on his Premier League debut, the 4-0 opening-day victory over Chelsea, before adding two further goals in his following three appearances. The Wales international had, after just four appearances for United, come to within one goal of his tally for the entirety of 2018/19, spent with Swansea in the Championship. He has become a regular feature of an exciting, dynamic attack, carrying much of its threat, and stretching opposing defences with his pace.

Tactical analysis
James is an extremely agile and explosive footballer, and one of the fastest in the Premier League. He is more of a runner with the ball than a dribbler, but his play in tighter areas is becoming more consistent, and he will further improve when he continues to encounter better opponents.

When receiving possession James will look to let it run across his body (below), and remain ready to explode forwards with his first touch. If this can create space to advance the ball into if an opposing defender commits, he risks being less effective if his opponent withdraws. 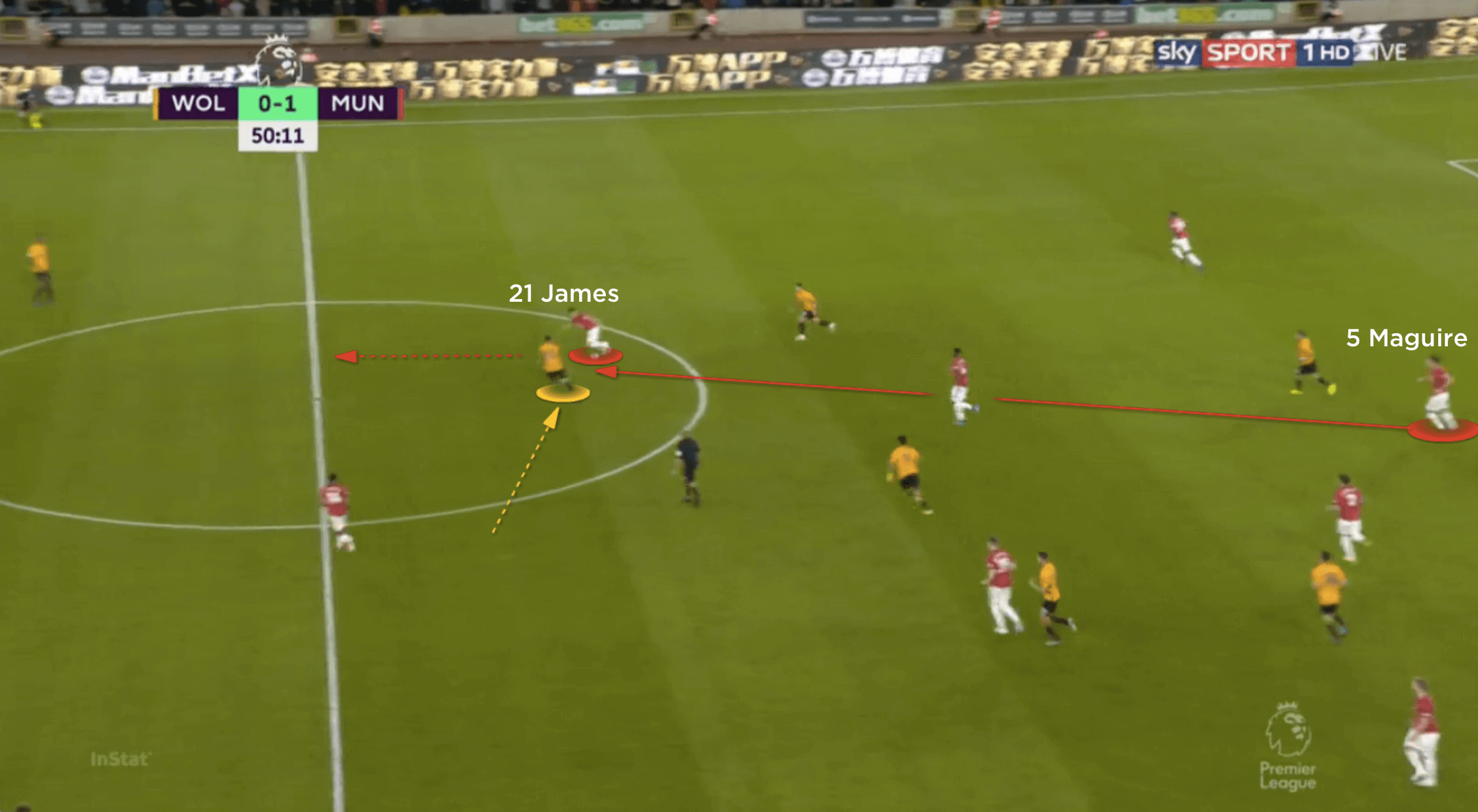 Although he’s not yet a proven goalscorer, James has shown that he poses a significant threat when cutting in from the left, and on to his stronger right foot. His subtle changes of speed and direction when cutting inside make him extremely difficult to stop – he needs only to create half a yard of space to shoot, and he is extremely effective at doing so.

James’ changes of pace are also very useful when pursuing space to deliver a cross into the penalty area, but those deliveries need to improve. When crossing from the left his ability to shift the ball from his right foot to his left creates a brief crossing window towards runners in behind; against more congested blocks, when lower crosses for delayed runners can exploit the smallest of gaps in an organised defence, doing so can be particularly valuable. When crossing from the right, his acceleration again creates opportunities to cross. 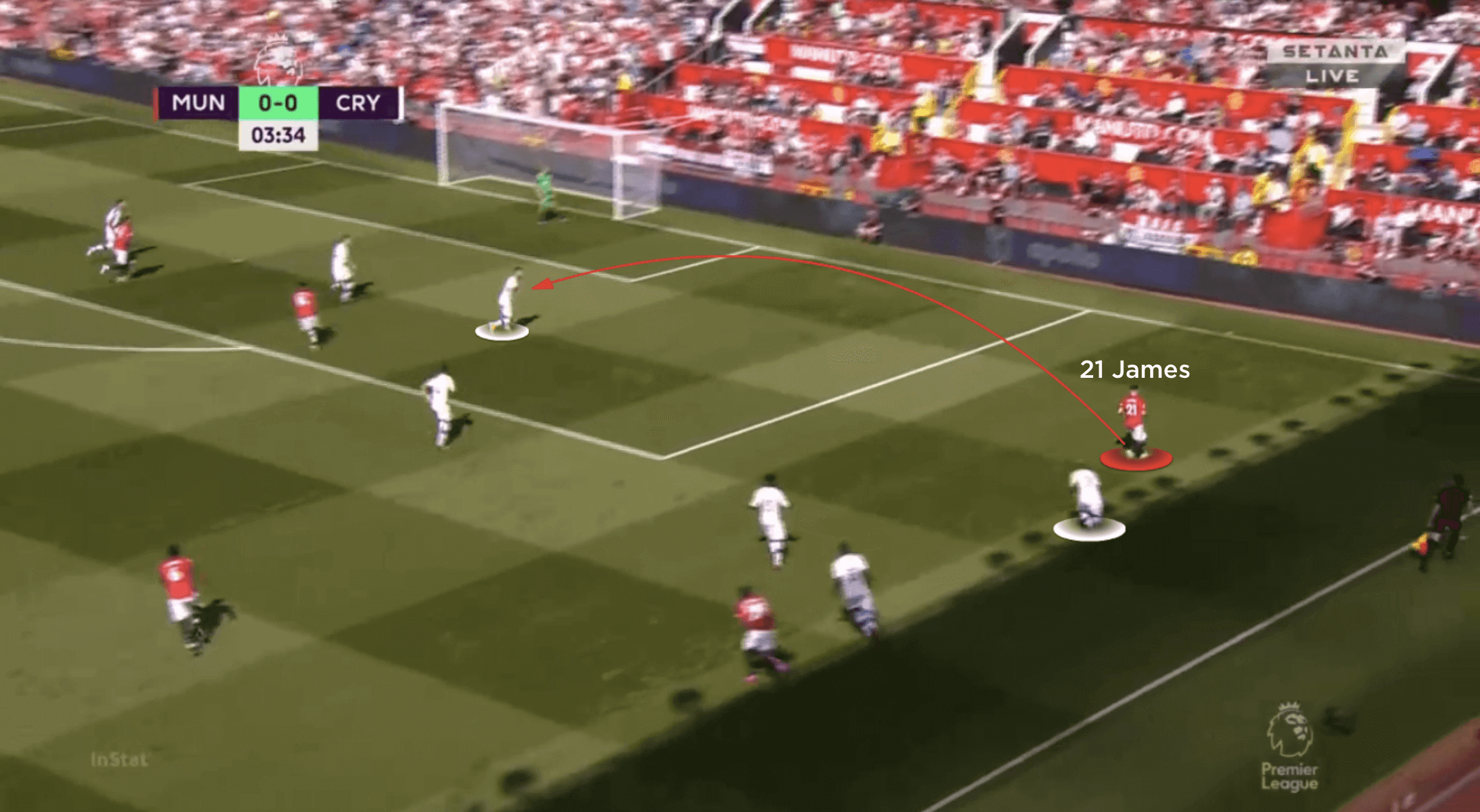 It is far from uncommon to see the first central defender clear his crosses (above), though this likely owes not to his crossing technique, but rather how difficult it is to quickly decelerate from one of his intense sprints, as has previously been seen with, among others, Aaron Lennon. Both players reach sprinting pace so quickly that they can then struggle to regain control when shaping to cross.

Role at Manchester United
James’ time at United has so far resembled that at Swansea. At both clubs he started on the right before settling on the left. It was an injury to Anthony Martial that led to James making that move at United, and Marcus Rashford adopting a central role in Solskjaer’s 4-2-3-1 formation. Rashford’s injury then contributed to James advancing into a front two alongside Martial; he has perhaps been United’s most effective attacking threat so far this season, and has given Solskjaer options. 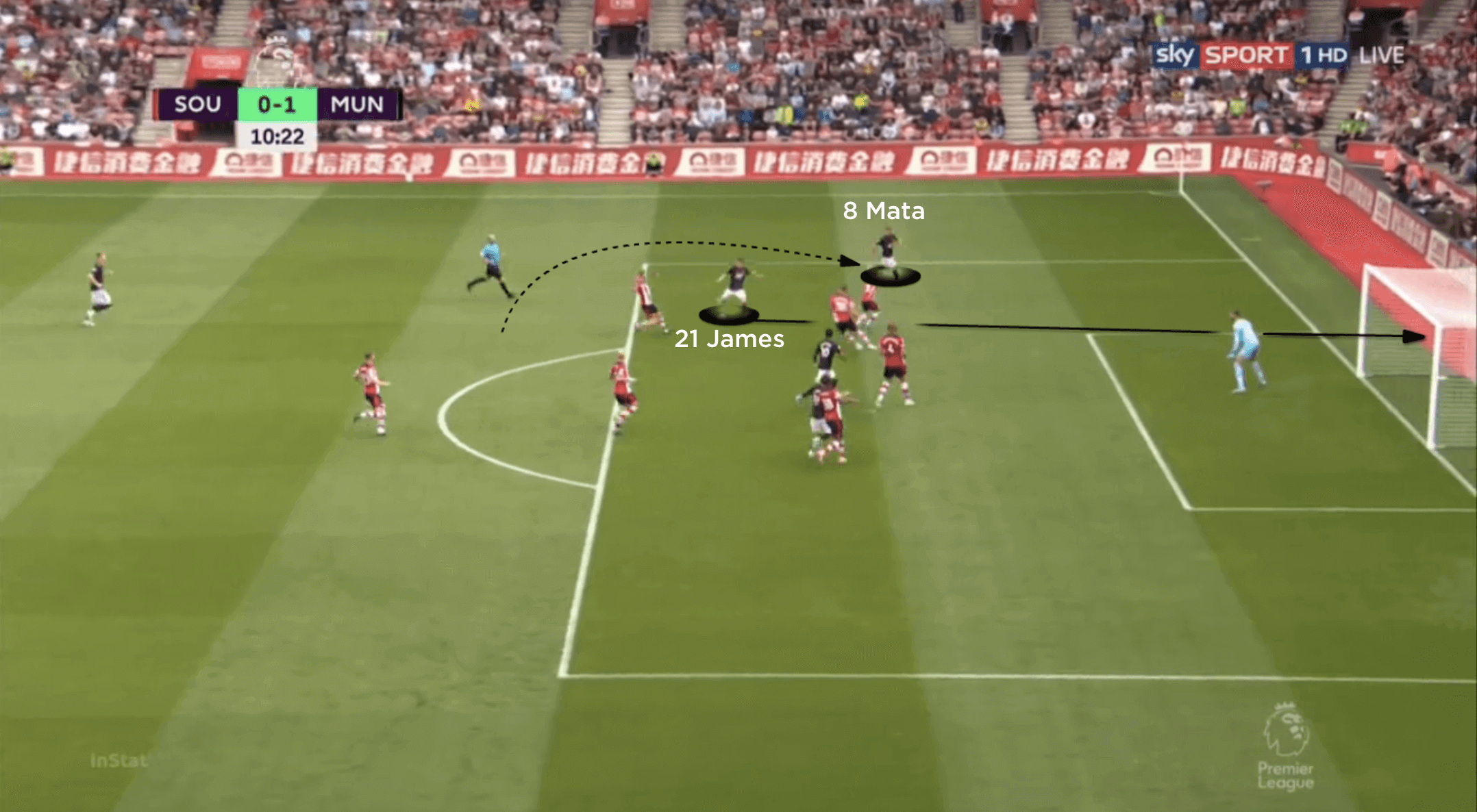 He is hugely effective when an overlapping team-mate tests the opposing full-back. James’ goals against Southampton and Crystal Palace followed an overlapping run from Luke Shaw, whose regular bursts from deeper territory invited James to find space.

The Welshman is also a reasonable finisher (above), and has already demonstrated that he can power shots across goal, delicately curve efforts around opponents, and produce unorthodox, yet accurate, shots. The problem for United is that James – like Rashford and Martial – carries an increased goal threat from the left, instead of the right; Solskjaer will need to determine which of that front three’s potential should be sacrificed by them starting from the right. 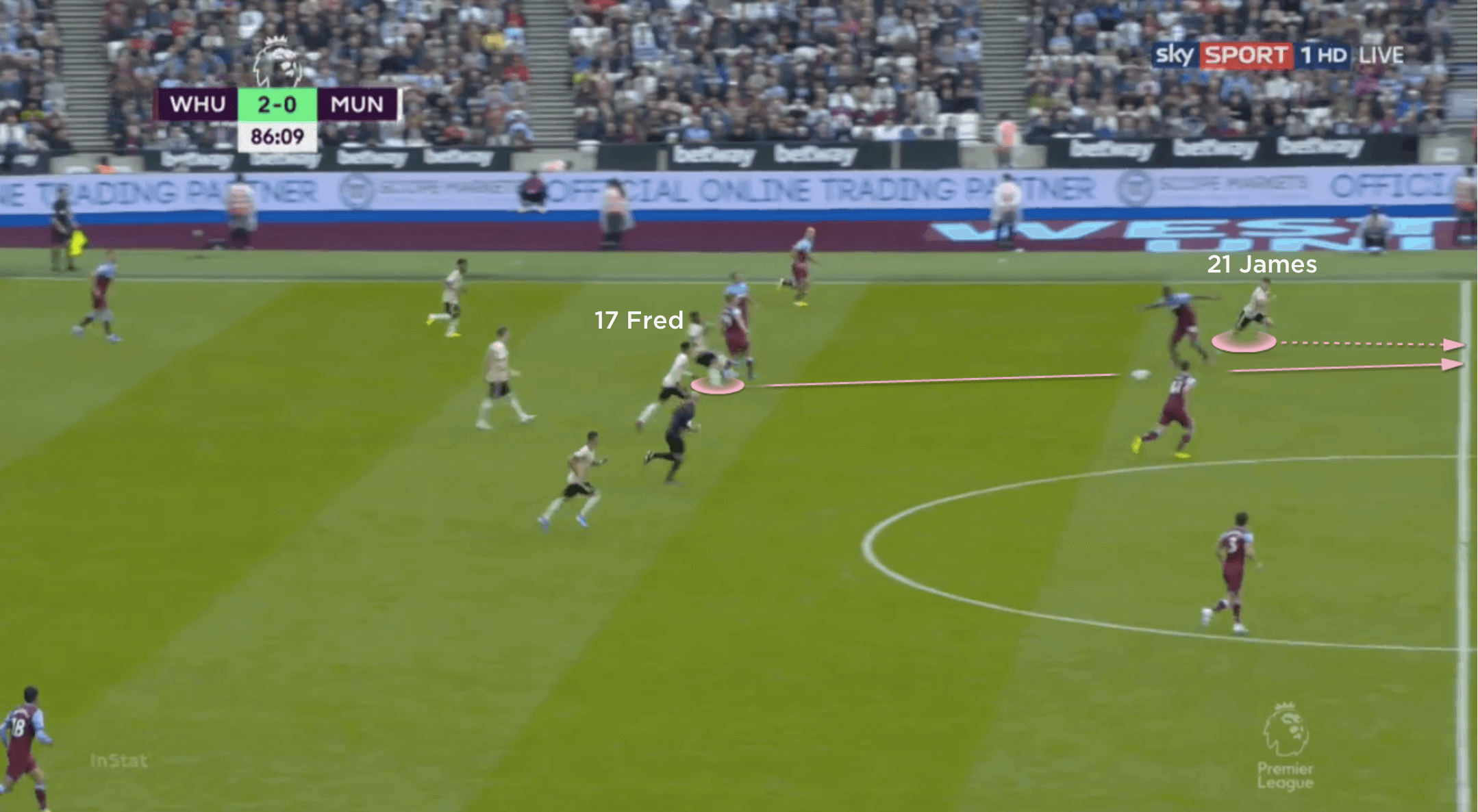 Of the three, James offers the most effective transitional threat, with his movement. He is far more explosive and direct than Martial, and prefers to receive the ball on the move, encouraging United to penetrate opponents quickly. James also instinctively looks to burst in between opposing defences and midfield.

Although Rashford performs similarly from a wide position, he is less effective when running through wider areas. His movements are more suited to a more advanced role, where he can attack the areas to either side of the opposing central defenders and advance to towards goal. That James is more effective out wide (above) also explains why he has perhaps been less effective when used alongside Martial in a front two. 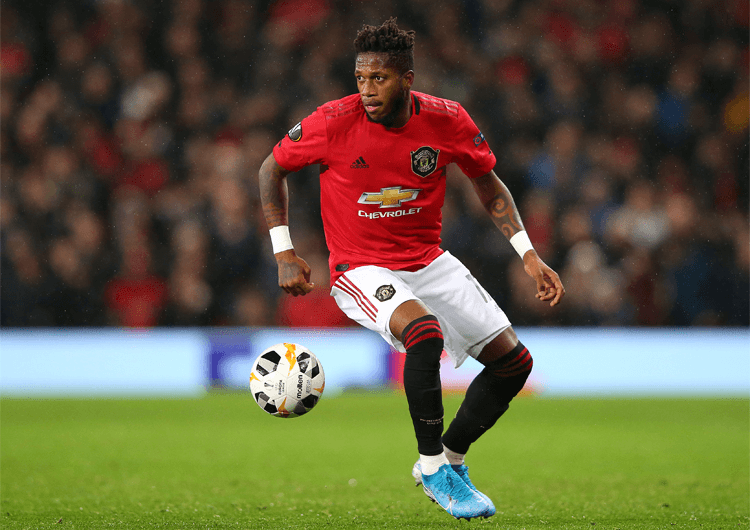 Ole Gunnar Solskjaer's midfield options have been undermined by injuries to Scott McTominay and Paul Pogba, but in their absence could Manchester United's £52m Brazilian Fred prove the solution? 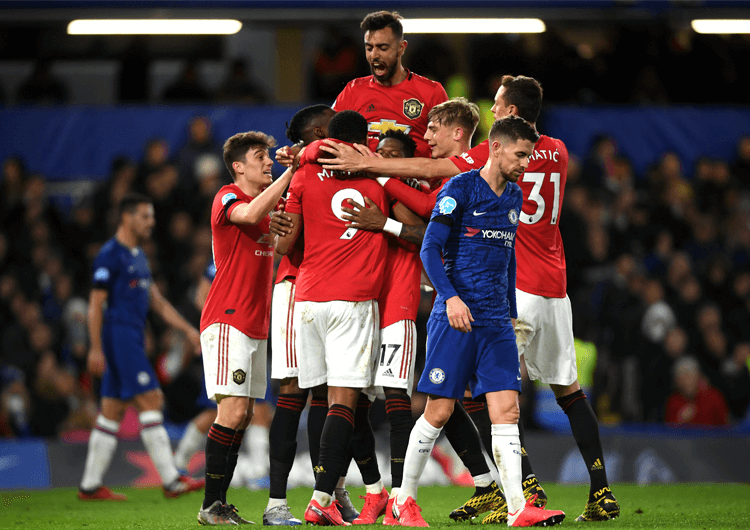 Manchester United secured a first league double over Chelsea in more than 30 years after an improbable victory at Stamford Bridge, to join Tottenham in the pursuit of fourth place. Our professional coaches assess how Ole Gunnar Solskjaer’s and Frank Lampard’s teams performed 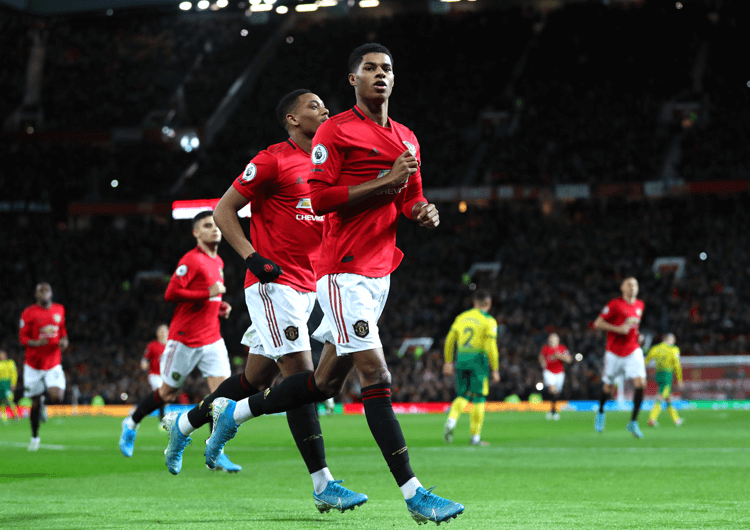 Marcus Rashford is producing his finest form, at a time when an injury to Tottenham's Harry Kane threatens England's ambitions. Our coaches assess whether Manchester United should play him wide, or as their leading striker