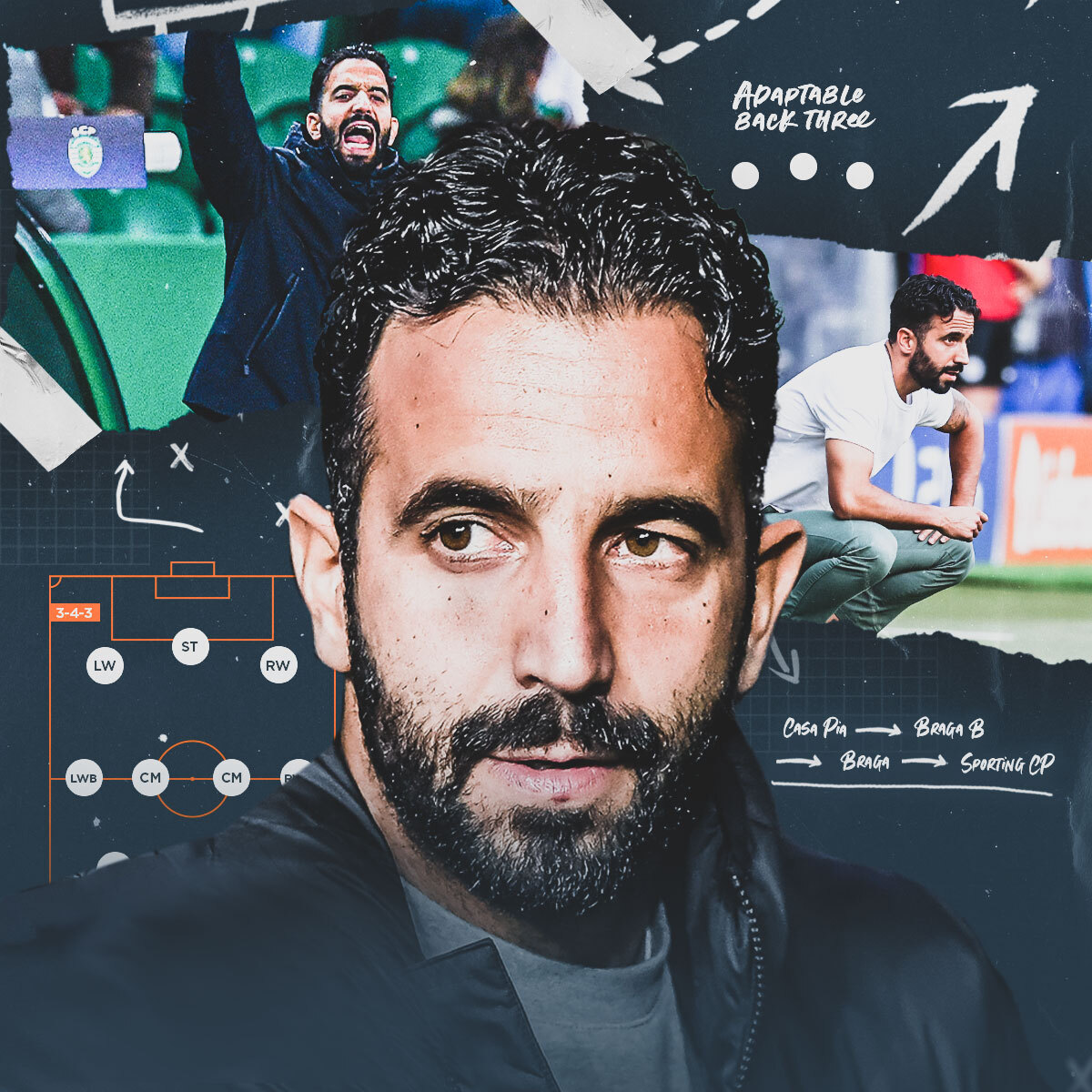 In only a few years in management, Rúben Amorim has become one of the most highly rated and sought-after young coaches in football. Having started out at Casa Pia in the Portuguese third tier as recently as 2018, Amorim got his first opportunity at a big club when Braga appointed him as reserve-team manager. Just three months later, after Ricardo Sá Pinto was sacked, Amorim took over at Braga. In doing so, he became manager of a club team competing in a major European league at the age of just 34.

Amorim impressed so much in his 13 games in charge – of which he won 10 – that Sporting Lisbon came calling, and in March 2020 they paid a significant fee to buy Amorim out of his Braga contract. Then, remarkably, in his first full season at the club, Amorim guided Sporting to a domestic double, including their first league title in 19 years. Sporting suffered only one league defeat all season, that loss coming in game 33 out of 34 – and after the title was already wrapped up.

Amorim's eye-catching and effective brand of football has quickly brought results, and has led to plenty of links to Europe's biggest teams. He is unlikely to think his work at Sporting is done just yet, but he will also be well aware of the teams he has been linked with, and may well have ambitions to one day manage in the Premier League. Here, we take a close look at the kind of football he likes his teams to play.

Amorim has tended to favour a back-three structure with Sporting and, throughout his time in charge, his side has played a possession-based game. During their deep build-up play, Amorim wants his three centre-backs to break the first line through the centre of the pitch as often as possible.

With the double pivot dropping deep, centre-backs Sebastián Coates, Gonçalo Inácio, and the converted left-back Matheus Reis look to play forward passes into the feet of the double pivot. They then look to turn and find the attackers between the lines. If they can’t turn, the midfielders instead bounce the ball wide to the wing-backs.

Amorim will also adjust his side’s shape, with the middle centre-back – usually Coates – slightly higher (below). This means the two pivots widen and move closer to the wing-backs. This can also open up more passing lines for direct and incisive forward passes from the wider of the centre-backs – now briefly in a pair – into attackers higher up the pitch. These passes will often bypass the closest options, and instead find an attacker dropping through the inside channels.

The higher of the three centre-backs is then operating between the two pivots, and in doing so can create a numerical overload in central areas to help beat an opposition high press. This means the players in Amorim’s back line can remain focused on breaking lines into central teammates, and means they only use the wing-backs during deeper build-up when absolutely necessary.

Whenever the wide centre-backs cannot play directly into the double pivot, a reverse of the previous pattern is used: the wing-back bounces the ball back inside to find the pivot players in a forward-facing position.

Higher up the pitch, Amorim likes his teams to attack with a fluid front three who rotate to find space between the lines. For the most part, the wing-backs hold the width, with the two wide forwards then moving inside, whether the team is in or out of possession. Sporting’s wide attackers over the past few seasons – players such as Marcus Edwards, Pedro Gonçalves, Francisco Trincão, Pablo Sarabia and Bruno Tabata – have all provided a consistent goal threat by working inside and beyond the single centre-forward, looking to dominate spaces in the inside channels.

Amorim has used Paulinho, a more traditional centre-forward, in the middle of the three. But he has gradually turned to a more fluid front line, with players who can attack from wide positions as well as rotate into a central position. This has allowed for further rotations to get players between the lines, and important overloads in the inside channels.

Nuno Santos has been converted from an attacking role and used as a left wing-back, which has added an extra attacking presence in the final third from the wide left. This is similar to how Graham Potter sometimes played wingers as wing-backs with Brighton, leaving a dangerous attacking player available to receive a switch of play. At Sporting, this had led to overloads in the right inside channel, with Santos, who is comfortable attacking 1v1, free on the left. Following a switch of play, the players who had previously overloaded the right inside channel make runs to attack the box for Santos to deliver crosses or cut-backs.

Out of possession, Amorim’s Sporting is one of the most intense teams in Portugal. When pressing high up the pitch, the front three narrow to prioritise protecting the central spaces. Just like when his team is in possession, Amorim’s first thought is to occupy central areas.

Once committed to a press, the attackers aim to force play outwards, with the wide attackers curving their press from in to out. The double pivot moves across with the ball, often staggering their positioning, with the closest ready to jump forward underneath the centre-forward. The positioning of the higher member of the double pivot between opponents allows them to defend just in front of the closest wing-back and make a decision as to who to press depending on where the opposition play their next pass (below). The wing-backs will aggressively press if the opposition break past the first line and find an opponent out wide.

The second pivot player will cover the central lanes, ready to drop in between the centre-backs – especially if one of the wider centre-backs gets pulled across the pitch when the wing-back jumps forward to press. The far-side wing-back will narrow, adding further protection ahead of the centre-backs in the central spaces. This also encourages the double pivot to be more aggressive with their staggered positioning and in their decisions to move out and press the ball.

When the opposition establishes possession and it isn’t possible for Amorim’s team to press high, they will usually drop into a 5-2-3 shape, although a 5-4-1 is used on occasion. His side still prioritises protecting the centre of the pitch, with their 5-2-3 block naturally forcing play wide. Here, Amorim’s team deploys a key pressing trap.

As the front line forces the ball wide, the wing-back jumps out of the back line of five. The far-side wing-back stays in a back line of four to protect the far post (below). The double pivot aggressively moves across the pitch to keep play locked on one side. It’s less likely they will stagger their positioning in the second line in these situations, with their focus now on preventing the opposition from playing back inside. The wing-back stops the pass down the touchline, and the closest centre-back stays ready to track any wide runner. The rest of the back line is positioned to compete for any aerial duels or switch of play.

The front line still works to press the ball – especially the two wide forwards – with the closest forward pressing the ball from behind to lock play wide. The centre-forward holds their position to try and prevent passes penetrating through the middle of the block, and the forward on the far side will adapt their position depending on the opposition’s strengths. If they good at switching play, the far-side wide player will recover back into the second line. If Amorim thinks it is worth taking more of a risk, though, this player will remain high, ready to transition quickly or press high if an opponent plays a trigger pass.

Amorim’s proactive football has led to plenty of positive talk about his future. It will be interesting to see just how high up into the footballing elite he goes.