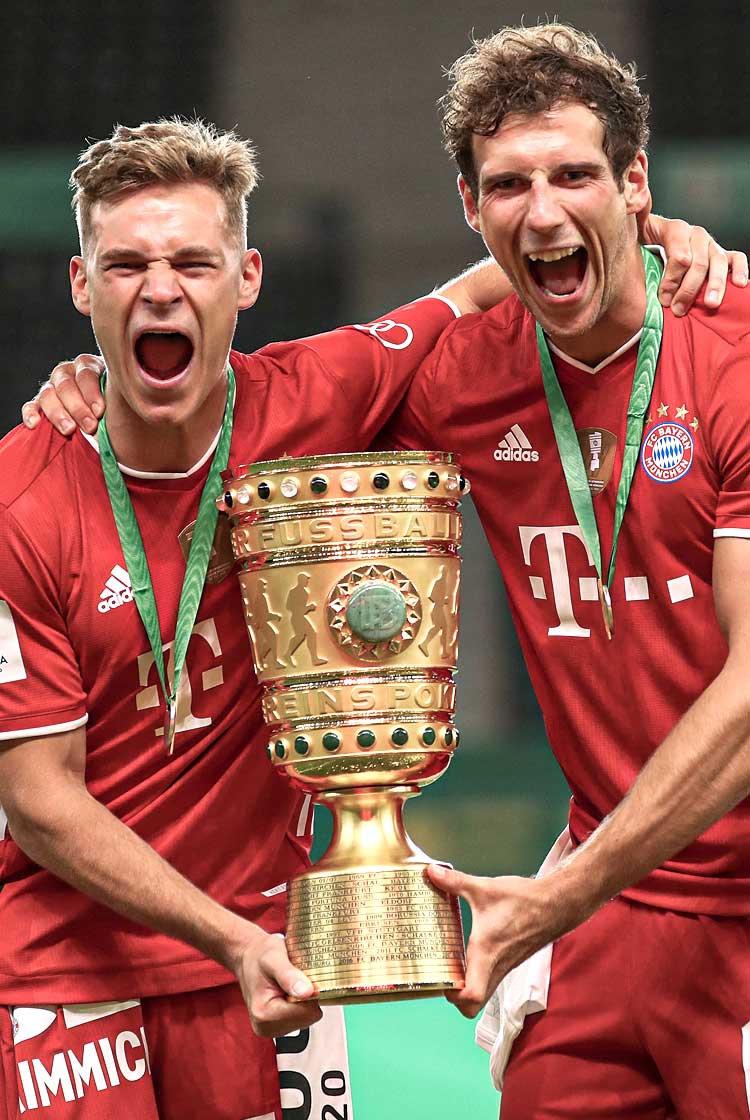 What is a double pivot?
A double pivot is a withdrawn central-midfield or defensive-midfield pairing. They are positioned in front of the central defenders, inside the full-backs or wing-backs, and behind the attacking midfielders. The duo is most commonly used in a 4-2-3-1 formation, operating behind a single number 10.

A double pivot can also be used in a 4-4-2 shape, especially when the wide midfielders move into narrow positions when the team attacks. Alternatively, a double pivot can be used ahead of a back three in a 3-4-3 structure.

A single pivot operates alone in the spaces between the defensive and attacking units. A double pivot, as the name suggests, adds a second player in that zone.

Where does the double pivot originate?
Two central players in front of the defence has long been common in football. The W-M formation introduced by Herbert Chapman in the 1920s featured two half-backs positioned ahead of three full-backs. Operating behind the two inside forwards, the half-back pair covered similar areas to that of the modern-day double pivot. However, the role of the double pivot has developed significantly over time.

In the 1980s, Brazil played in a 4-2-2-2 formation, with Falcão and Cerezo in front of the defence and behind Zico and Socrates. This evolved, as time went on, into something resembling the modern 4-2-3-1. One of the centre-forwards dropped back, and the attacking midfielders moved wider to form a three behind a lone striker.

At the 1986 World Cup, teams started to use just one holding midfielder to free another player further forward. Then, after France’s successes with a single pivot at the 1998 World Cup and Euro 2000, teams in Europe increasingly used one player to cover the central space outside the penalty area – often referred to in coaching as ‘Zone 14’. A second player was eventually added – particularly in Spanish football – as opponents realised they could drag the single pivot away from the centre of the pitch with movements out towards the flank, leaving the defence exposed. Juanma Lillo, Pep Guardiola’s assistant at Manchester City from 2020, was one early advocate for the permanent 4-2-3-1 shape that featured a second pivot. He wanted his teams to press high more effectively, with the ‘doble pivot’ supporting the press while adding security behind its first line.

What are the in-possession responsibilities of a double pivot?
The players in a double pivot must possess awareness and understanding of spaces and pressure, especially in central areas. Each needs to be constantly aware of the position of their midfield partner. They must never offer on the same lines or occupy the same spaces.

These two players operate mostly underneath the attacking unit, so one has licence to support attacks with late forward runs. These can be made through well-timed, off-the-ball runs to penetrate into the penalty area, overlapping movements around wide players who have moved inside, or by driving forward with the ball. Often, these runs come during transitions.

The double pivot must provide protection for the centre-backs, so they need to communicate well and be disciplined and organised enough to help maintain a defensive block. Knowing when to leave their slot to press, or move out as cover for a wide player, is also key.

The double pivot's responsibilities also include supporting a high press and delaying counter-attacks. Locking the ball on one side of the pitch and curving runs to press outwards are also important jobs.

What are the best modern examples of the double pivot?

Bayern Munich under Julian Nagelsmann
Under Julian Nagelsmann, Bayern Munich often employ a double pivot featuring Joshua Kimmich and Leon Goretzka. They provide balance to the team in attack, but also good protection and defensive presence out of possession. Kimmich has experience at full-back, meaning he can defend effectively in one-on-one situations. He is also comfortable dropping into the back line, to push one of the full-backs forward, as Bayern build. Goretzka is more attack-minded, especially in his movements. Once number 10 Thomas Müller has moved forward to support the striker or moved out wide, central spaces open up for Goretzka to attack, providing support inside Bayern’s two wingers (above, top).

Chelsea under Thomas Tuchel
Chelsea have used a double pivot in front of a back three under Tuchel. This is most often in a 3-4-2-1 formation, with two number 10s behind a lone forward. Two of Jorginho, Mateo Kovacic and N’Golo Kanté tend to form the pair at the base of midfield, while the wing-backs provide the team’s attacking width. Jorginho’s ability to dominate the build-up with short passes helps connect the defence with Chelsea’s two attacking midfielders. Kovacic and Kanté complement the Italian by offering penetrative passes for centre-forward Romelu Lukaku to secure (above). They are also adept at dribbling their way out of trouble.

David Moyes’ West Ham
Tomas Soucek and Declan Rice combine to create a formidable pairing at the base of West Ham’s midfield under Moyes. They provide fantastic protection for the back four, with both exceptional in individual duels. They also press superbly, and work back to cover behind their centre-backs effectively. In possession, Rice provides powerful forward runs and can penetrate by carrying the ball over significant distances (above). Soucek offers well-timed forward runs to receive on the move, and adds presence when crosses are put into the penalty area.

AC Milan under Stefano Pioli
Milan tend to set up with a double pivot comprising two of Sandro Tonali, Franck Kessié or Ismaël Bennacer. One drops into the back line during build-up, creating a three-man first line with the centre-backs. The remaining player in the double pivot then temporarily builds as a single pivot, looking to connect passes into the two centre-forwards. This helps push both full-backs forward, with the wider centre-backs covering the area the full-backs vacate. Milan sometimes attack with one full-back overlapping and one underlapping. They can do so, with the security of the double pivot and two centre-backs behind the ball (below).

Which other teams have used a double pivot successfully?

– Liverpool in 2008/09 under Rafa Benítez: Xabi Alonso and Javier Mascherano.
– Chelsea in 2014/15 under José Mourinho: Cesc Fàbregas and Nemanja Matic.
– France at the 2018 World Cup under Didier Deschamps: N’Golo Kanté and Paul Pogba.
– England at Euro 2020 under Gareth Southgate: Kalvin Phillips and Declan Rice (below).

What are the benefits of playing with a double pivot?
The double pivot provides more defensive protection ahead of defence than a single pivot, with a strong presence in central midfield. The two players can screen forward passes, and compete for loose or second balls following direct passes from the opposition.

A double pivot also offers an additional passing option to create overloads either in central or wide areas. Two players evidently offer a greater variety of movements than a single pivot.

The presence of two central midfielders beneath the ball allows both full-backs to push forward simultaneously. Two players can then share responsibility for breaking up or delaying opposition counter-attacks. They can also cover both sides of the pitch, as and when the full-backs attack at the same time.

In attack, the double pivot offers an extra forward run from deep in central areas, with defensive cover still provided by the more reserved of the pair. Such runs can lead to high-quality chances when the opposition fail to track them. When they are tracked, they can act as decoy movements to drag opposition players out of position and free up teammates.

What are the disadvantages to playing with a double pivot?
Using a double pivot can crowd central spaces for a more creative, deep-lying midfielder who might be more effective as a single pivot. Equally, if both players move into similar positions, they can end up doing the job of one player.

A double pivot also takes a player out of the attacking units. This often leads to more complicated movements and rotations to restore numbers in attack, usually through the full-backs pushing forward. This can take time to master and requires tactically intelligent players who understand when and how to change position during an attack.

The double pivot can also reduce the numbers who join counter-attacks, placing more pressure on the attackers following a regain. If the opposition have not committed many players forward in the first place, then it may be a waste of a player to have a double pivot in place.