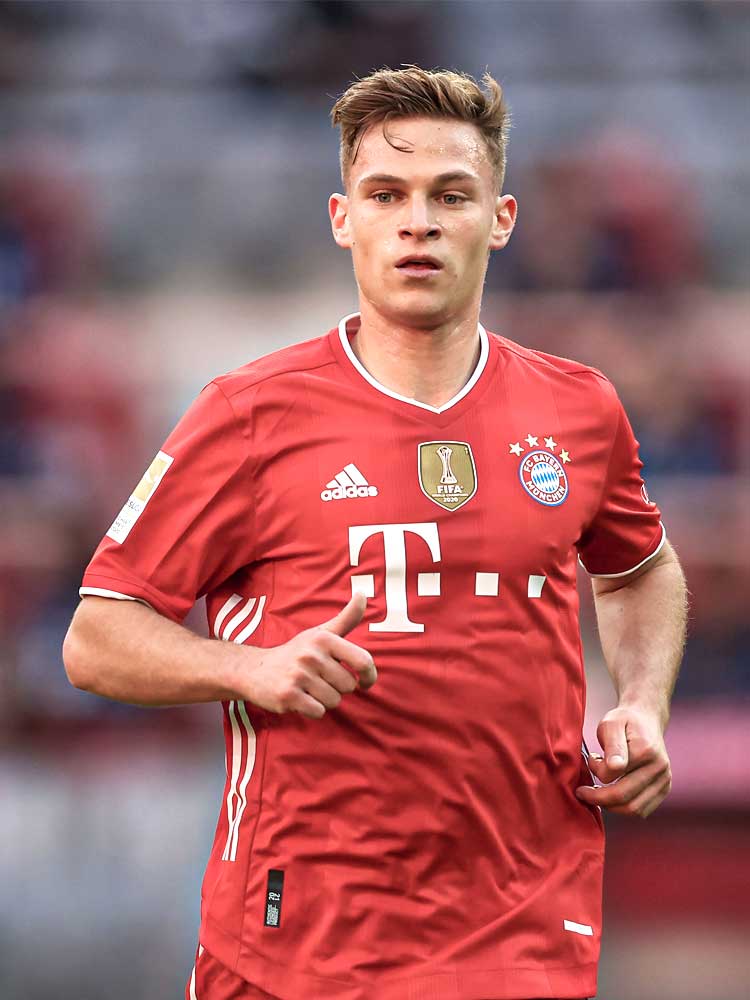 Profile
It is perhaps the presence of Joshua Kimmich, more than any other, that meant that losing a central midfielder of the calibre of Thiago Alcântara to Liverpool has done so little to threaten Bayern Munich's long-term dominance of the Bundesliga. Reinvented from the full-back he had become to the classiest of midfielders with the same remarkable success as once witnessed with Philipp Lahm, he is Bayern's most important player.

Though it was with RB Leipzig that he first established himself as so promising a talent, Kimmich's consistency, composure and mindset also perfectly captures the relentless drive for more that continues to inspire Bayern's success. "Joshua Kimmich is an absolute professional, a mentality monster,” said Hansi Flick, Bayern's manager when they won the Champions League in 2020.  "He’s always in the game; he never gives up. He’s one who always pushes but of course has enormous quality on the ball.”

Tactical analysis
Kimmich's passing range, particularly to those on the move, is of the very highest quality. Whether playing longer-range passes to those making forward runs, short while under pressure, breaking lines, or switching play, his execution consistently excels. Before playing those passes he also scans and checks his shoulders to build a picture of what is around him and to ensure that he continues to take the right decisions.

If he is instead carrying possession forwards – he often does so through larger spaces – his habits are similar, and largely because of the extent to which he has played full-back, from where he travelled along the touchline and scanned in one direction to establish when to release the ball with an element of creativity, or even to provide an assist. His crossing, if in a wide position, is therefore a similar strength. He is capable of delivering balls from deeper positions and of overlapping and then playing in behind defences, and when attempting either he takes few touches; if doing so from a central position he instead relishes his increased time and space, takes more touches to create the angle he seeks, and varies the nature of his deliveries.

He demonstrates that same intelligence when required to defend, and more specifically when judging when to directly challenge an opponent, when to jockey and delay them, and when to withdraw and retreat. If he is not the biggest he duels with aggression – particularly on the ground – and is tenacious enough that if he is beaten he works to recover a position that means he can again challenge and prevent further progress. His willingess to do is particularly valuable during moments of transition; if defending in a set block he recognises suitable triggers and when to press, and remains braced to capitalise on poor touches or a poor body shape and to react with that same aggression to either intercept possession or to make a tackle.

Kimmich's biggest strength, regardless, is the fact that he can use his many qualities in so many different areas of the pitch (above). Only an individual with his technical qualities and intelligence would prove capable of performing so many position-specific tasks with the quality and efficiency he shows. That intelligence contributes to him adapting his game at the highest level as often as it ensures he can use his passing and line-breaking abilities (below) from a wide area as a cultured full-back or from central midfield.

Role at Bayern Munich
Kimmich joined Bayern aged 20 in July 2015 when Pep Guardiola remained manager, and was used as both a defensive midfielder and in central defence. It was under the Spaniard's successors, Carlo Ancelotti and then Jupp Heynckes, that he consistently featured at right-back. Niko Kovac, and then Flick, largely again favoured deploying him in central midfield in what was consistently their 4-2-3-1.

The potent Leroy Sané, Kingsley Coman and Serge Gnabry have since benefitted from his ball-playing abilities from their double pivot. Each are comfortable attacking around their opposing full-backs or drifting infield and relish moments of transition, and Kimmich's passes regularly find them in a variety of positions towards both the left and right. Even if Bayern are enjoying a lengthier spell of possession and encountering a resilient defensive block, Kimmich is capable of targeting their runs by playing over that block.

In Thiago's absence, and often partnered at the base of midfield by Leon Goretzka, he has become their most talented passer of the ball. That Goretzka is often instructed to provide forward runs to support Robert Lewandowski, Bayern's lone striker, means Kimmich often features as their single pivot (above) from a deeper position, from where he represents their central link between defence and attack. Goretzka's runs also often provide him with a further target, or instead free up an attacking teammate. The educated movements and positions demonstrated by Thomas Müller and Corentin Tolisso similarly create additional passing lanes.

Through having to adopt that deeper position, Kimmich's ability to access Bayern's wide forwards can become compromised, so his ability to instead feed their advancing full-backs and their overlapping runs – Alphonso Davies particularly – becomes increasingly influential. His positioning also means that he attempts fewer crosses from wide areas, unless Bayern have been awarded a suitable set-piece.

His defensive contributions (above), particularly after Bayern have lost possession and he provides protection at the point of transition, have proven similarly valuable. His position means he is capable of covering attempts to advance from either of Bayern's wide forwards or full-backs, and to contribute if they are defending with a compact block, whether via a higher press or mid-block. Kimmich wins possession in the centre of the pitch as often as he does from the right, and when he does so when contributing towards the right, Benjamin Pavard is invited to attack from right-back, and Gnabry or Coman to drift infield to attack close to Lewandowski, giving their rotations significantly more potential.

Through being able to cover both full-backs and wide forwards, even if him doing so towards the right is more common, Kimmich essentially epitomises what is required to excel in a double pivot at the very highest level – particularly in a team featuring a number 10. His presence is largely why Bayern's full-backs advance at the same time. There is perhaps no other player capable of providing so much quality to so many areas of the pitch.