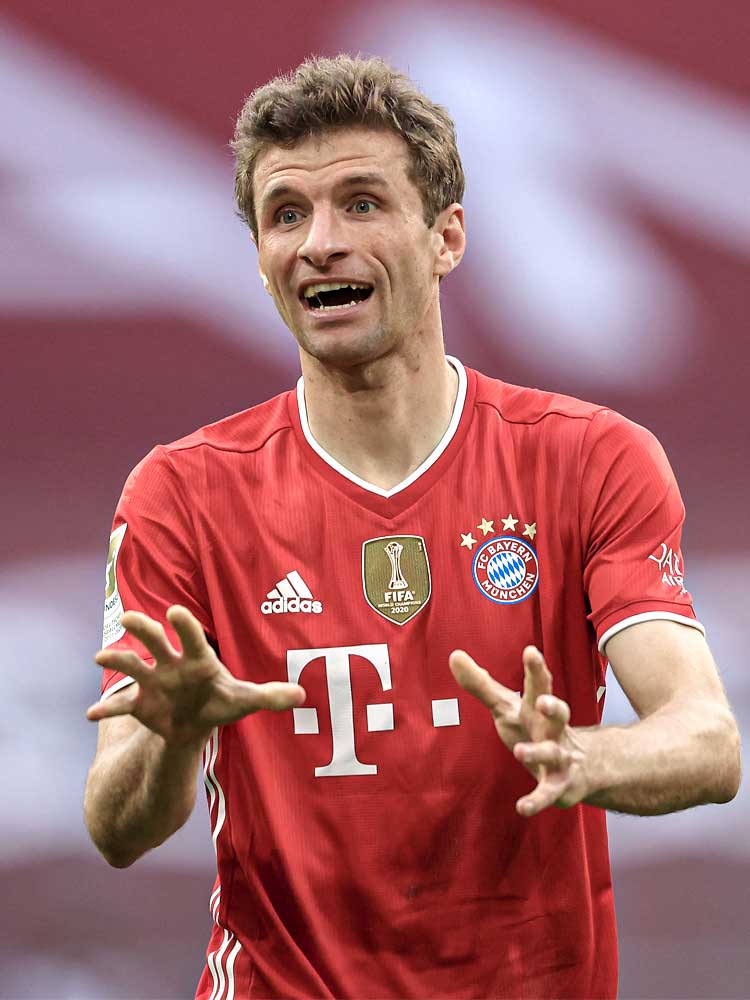 Profile
Given his accomplishments, Thomas Müller is underrated. Level with David Alaba in the all-time standings for Bundesliga titles; fourth in the list of Bayern Munich’s all-time top goalscorers; one of only 11 players with 100-plus caps for Germany and both World Cup golden and silver boots, Müller has somehow only twice been named in the top 10 in the list for the yearly Ballon d’Or.

There had been times it looked like his skills might have been fading. At 30 years of age, he fell out of favour in the early part of 2019/20 under Bayern’s then-manager Niko Kovac. Having not made an appearance for Germany in well over a year, Müller appeared to be on his way towards a typically understated exit from European football’s main stage. Since Hansi Flick's appointment as Kovac's successor, however, he has returned to his best, playing a crucial role in Bayern's successes since then, and to the extent he has even been recalled by Germany.

Tactical analysis
Müller is a unique footballer. He is also one of very few modern-day players to have done their job so effectively that a new role is born from their game.

A self-professed raumdeuter – or space interpreter – Müller is constantly on the prowl for spaces in the opposition’s shape that he can exploit. He can play – nominally at least – in any position in attack or midfield, but he will rarely be found in the areas expected from someone playing in the role he is selected. He is the number 10 who floats to the wing or drifts beyond the forwards; he is the wide forward who moves between the lines; he is the centre-forward who selflessly withdraws to create space for a midfield runner.

He is the perfect complement to his teammates, and often quite literally the best teammate in Europe – his 21 assists were more than any other player in the Bundesliga in 2019/20, even though he had become peripheral under Kovac. By way of comparison, Manchester City’s Kevin De Bruyne, first in 2019/20's Premier League, recorded 20 assists having played 539 more minutes.

Müller is always on the move, and his tendency to drift into new and unexpected positions means opposing defenders have to be alert and in constant communication to monitor him. The moment his marker loses sight of him is the moment he strikes, by making a quick, penetrative burst into the penalty area. He scans the pitch and his surroundings regularly, aiming to stay one step ahead of his opponents and, crucially, aware of where his teammates are. His awareness is one of his greatest strengths, and is what marks him out as one of the best attackers in the world.

Müller is particularly dangerous at offensive transitions. Usually stationed on the front line of Bayern’s press, he is responsible for putting pressure on a central defender or a defensive midfielder, and the combination of his intensity and intelligence leads to numerous turnovers. Equally capable of winning possession back in the final third and anticipating a teammate doing so, Müller pounces on opportunities to launch an attack when it is won close to goal. As soon as possession is overturned in the final third, he springs into action, and he is particularly adept at playing instinctive killer passes immediately after winning the ball back. Doing just that has led to a number of those assists (above).

He is also a master of arriving late to support an attack, ghosting into dangerous positions in the area – often on the shoulder of a defender, or by simply anticipating a loose ball quicker than his nearest opponent. He has fast reactions and shows a ruthless, predatory instinct near goal; many of his goals and assists come as a result of him anticipating a chance before a defender has the chance to clear or to move ahead of him.

Role for Bayern
Flick was central to the huge upturn in Müller’s form. In 12 appearances in 2019/20 under Kovac, Müller created five goals and scored just once; in the first 22 matches after Flick's appointment, Müller recorded eight goals and 13 assists. Though Müller’s position remains largely meaningless because he moves more or less where he likes, under Flick he has often been named as the right-sided attacking midfielder in a 4-2-3-1. The three in that formation interchange positions regularly and freely, and Müller will often be found careering along the left wing, but he does much of his best work in a right-central position (above). He is not a dribbler and never has been, and instead prefers a swift one-two with a teammate, infield, to advance beyond his direct marker and into a position to threaten goal.

From those positions he is a threat with his crossing, which has improved markedly, perhaps since the departures of Arjen Robben and Franck Ribéry – five of his first 17 assists in the Bundesliga in 2019/20 came from crosses. That total was already his highest from crosses in any single season in his career. It is no coincidence that Müller creates so many goals for Robert Lewandowski, who is brilliant in the air. Müller to Lewandowski was the best assist-to-goalscorer combination in the Bundesliga in 2019/20.

They have developed a great understanding and rotate positions regularly. When Müller plays as Bayern’s number 10, Lewandowski varies his movements more, and drops deeper both to look for the ball and to create space for Müller to move into to provide a direct threat on goal (above). Their vertical interchanges are an effective tactic for testing opposing defences, and given Bayern's opponents often sit deep against them, their movements are particularly useful.

Bundesliga games behind closed doors have shown how vocal Müller is in directing teammates about where to move and how to build play. They have not only given a further insight into how intelligent a player Müller is, but also revealed his potential suitability to coaching once his playing days end.