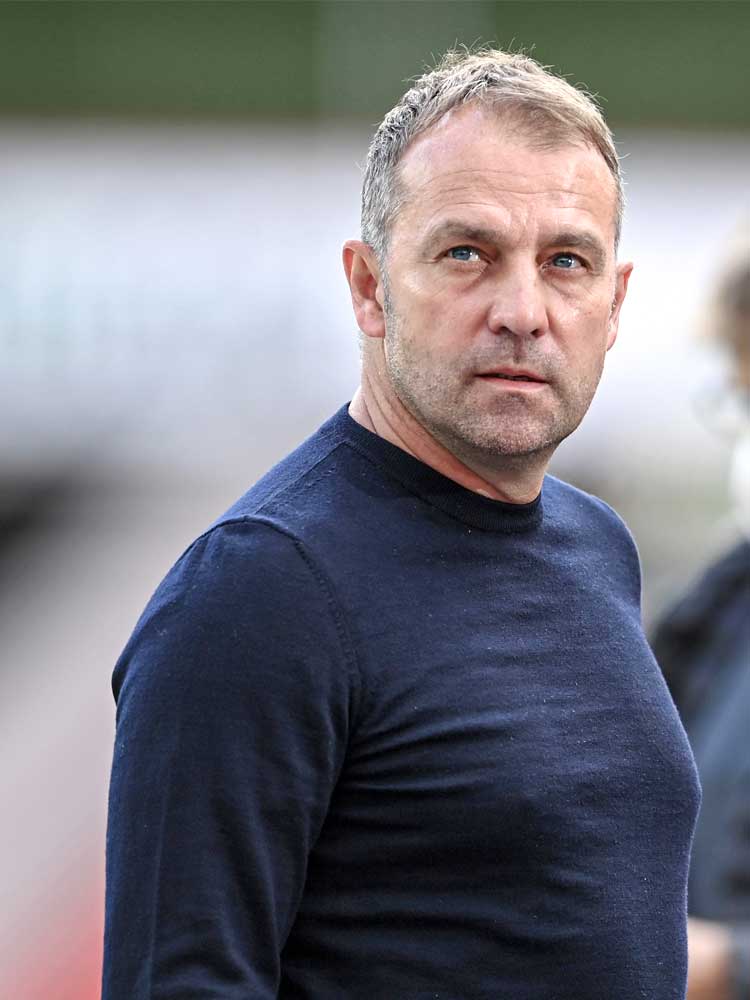 Profile
Hans-Dieter Flick had been Bayern Munich's interim manager for little over four months when he agreed a contract to remain in his position on a permanent basis. Appointed Niko Kovac's assistant towards the start of 2019/20, he succeeded the Croatian on a temporary basis in November before so convincingly overseeing 18 victories from his 21 matches in charge that Bayern had little need to make another of the high-profile managerial appointments they had become accustomed to.

Flick spent five years playing in midfield for Bayern during the 1980s when, alongside Lothar Matthäus and others, he made 137 appearances in the process of winning four Bundesliga titles and the German Cup. He was also Joachim Löw's assistant with the Germany national team from 2006 to 2014, and was therefore particularly familiar with some of Bayern's most recognisable players – those he most notably galvanised before leading them to the Bundesliga title and the Champions League. That he will succeed Löw after Euro 2020, at the age of 56, therefore seems the most natural of career progressions. "I am hugely excited, because I see the class of players, and especially young players, which we have in Germany," he said.

Playing style
Flick inherited a squad that under Kovac had most regularly used 4-3-3 and 4-2-3-1 formations, and he has since remained committed to a consistent 4-2-3-1 that offers an asymmetrical attacking shape and often involves seven players advancing to attack in front of ball-playing defenders. Injuries contributed to David Alaba being used in central defence and Alphonso Davies deputising at left-back, but when he starts on the left and Benjamin Pavard is on the right they have two particularly attacking full-backs. Flick has even experimented with using Joshua Kimmich in defence alongside Pavard, Alaba and Davies – essentially four players who are perhaps most comfortable at full-back.

In front of his defence he has most commonly favoured Kimmich and Leon Goretzka at the base of their midfield, largely because of Kimmich's willingness to withdraw into defence to create overloads when attempting to build play, in turn inviting Pavard and Davies to advance from full-back. When he does so, Goretzka operates as a single pivot, and seeks to link play with their four most attacking players. His ability to receive and then progress possession, even under pressure, ultimately increases Bayern's dominance of the attacking third of the pitch.

The 3-1-4-2 they form (below) through Pavard and Davies moving into midfield, and Thomas Müller joining Robert Lewandowski up front, increases their presence in the final third. The ability of Jérôme Boateng and Alaba to play accurate, long-range passes is perhaps unrivalled by any other central defence, and is complemented by several runners covering the width of the pitch.

Serge Gnabry has increasingly been used as their left-sided forward. He has a fine understanding with the overlapping Davies and, though like the right-sided Kingsley Coman he is also right-footed, he offers greater end product and more of a willingness to shoot, which makes him suited cutting infield from the left on to that right foot.

Lewandowski has long been a superb, goalscoring striker, and his ability to occupy or beat opposing central defenders has been enhanced under Flick by his willingness to withdraw into the left inside channel – particularly since Davies' switch to left-back. When the Canadian advances, Lewandowski often either combines with runners in central territory or spins and attacks into the penalty area, often having drawn a central defender out of position with a previous movement.

Davies is also showing a willingness to make runs inside when Gnabry remains wide, making Lewandowski even more influential (below). By withdrawing to receive the ball, the striker invites teammates to play passes towards Gnabry, Coman or Leroy Sané and in behind opposing defences.

That attacking potential is enhanced by the influential Müller. As Kovac attempted to accommodate Philippe Coutinho, Müller struggled to find a place in their XI, but after Flick's appointment he consistently featured as their number 10. From that position, he supports Lewandowski in central territory.

He also intelligently drifts towards the right to create an attacking triangle with a wide forward and full-back (below). Pavard is most commonly that right-back, but unlike Davies, he is more inclined to play possession than carry it, so Müller’s movements invite the wide forward to drift infield or beyond the opposing defensive line. Coman's willingness to carry the ball also makes him a suitable selection on the right when Pavard is their right-back. The presence of Müller and Pavard, in addition to Gnabry's desire to cut infield from the left, mean that Flick's team offers significantly more deliveries into the penalty area from the right than it does from the left; Lewandowski thrives on those deliveries by attacking, often through making runs across the defender following him.

Defending and pressing
The effectiveness of Bayern's press under Flick owes much to its second wave (below). From their 4-2-3-1 block, their front three struggle to cover the width of the pitch and to prevent their opponents from progressing beyond them. They therefore rely on their full-backs and their double pivot keeping possession in the inside channels or wider spaces, before trying to prevent their opponents from switching play. When they do so, from further forwards that front three moves towards the ball from behind it, further reducing their opponents' options and leading to the many regains they make in the midfield third.

Flick also prefers Bayern's defensive shape to feature a high defensive line that encourages their double pivot and full-backs to adopt positions where they can press the ball as it approaches the midfield third, and to screen and block against switches of play. Their defensive efforts also involve energetic and assertive attempts to win possession led by those four players, before the second wave of their press is applied.

Boateng and Alaba are far from imposing in the air so opponents often target their strikers with direct balls. They regularly succeed with the first phase of their attack, but the cover offered from Bayern's double pivot – Kimmich and Goretzka show great defensive awareness – often negates the second.

Six players often quickly surround the ball – doing so from their attacking shape is relatively seamless – meaning they regularly remain in advanced positions from which they can launch a counter. During those defensive transitions, the athleticism of Pavard and Davies also represents a significant strength; balls played over the top of Bayern's defence are regularly negated by the pace they can offer when recovering into the defensive third, if not by their goalkeeper Manuel Neuer, who sweeps up effectively.