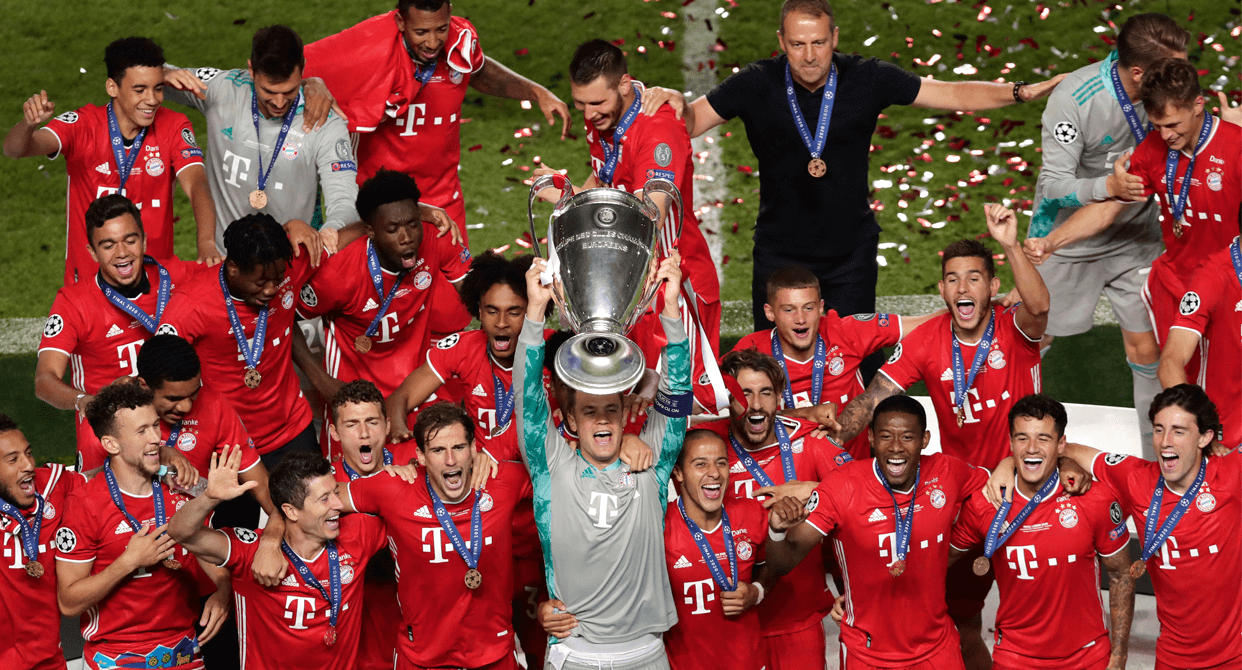 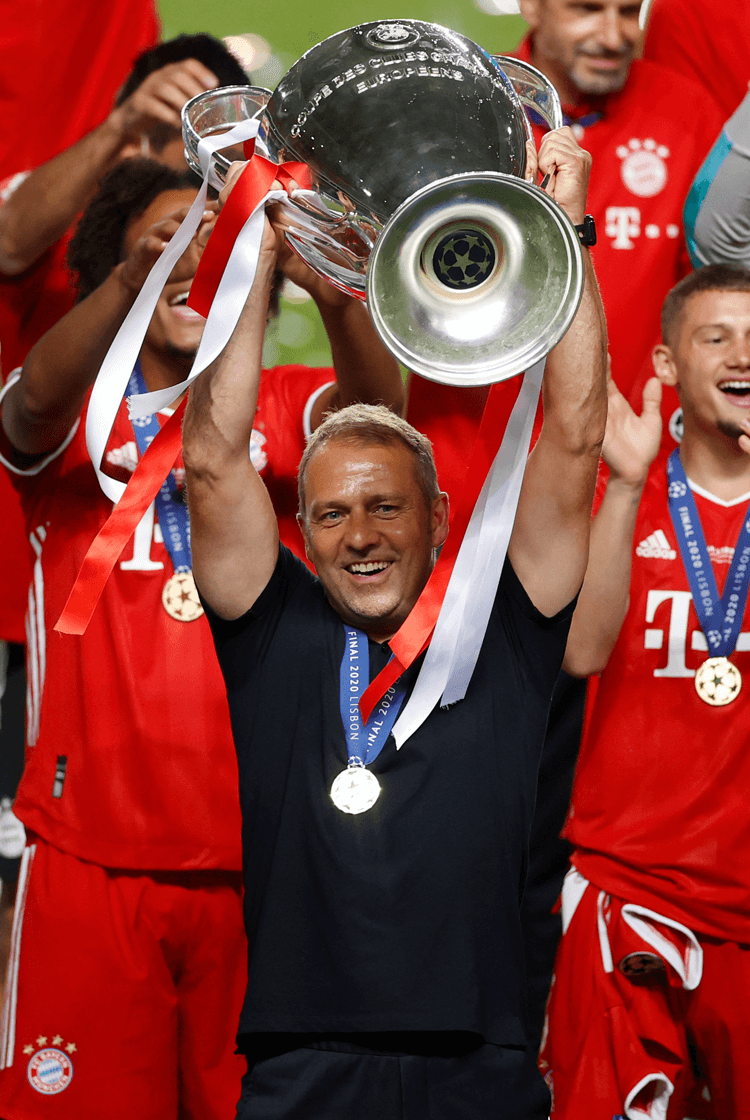 Bayern Munich won their sixth Champions League title by defeating maiden finalists Paris Saint-Germain in Lisbon. Former PSG forward Kingsley Coman headed the game's only goal in the 59th minute, particularly punishing Kylian Mbappé, who should have given PSG the lead on the stroke of half-time. Mbappé also appealed for a penalty during the second half, following a challenge by Joshua Kimmich, but those appeals were dismissed. Coman's goal happened to be Bayern's 500th in the competition; only Real Madrid, with 13, and seven-time winners AC Milan have won more than their six Champions League trophies. Their clean sheet also represented the first time in 35 matches in a major European competition that PSG haven't scored. "When I saw the headlines in November, all I read was that nobody is afraid of Bayern any more," said manager Hansi Flick, who succeeded Niko Kovac in November, initially on an interim basis. "We deserved to win, because of the second half. You could already see in training at our winter camp in January that something big was growing. The team just has this overwhelming will to win." 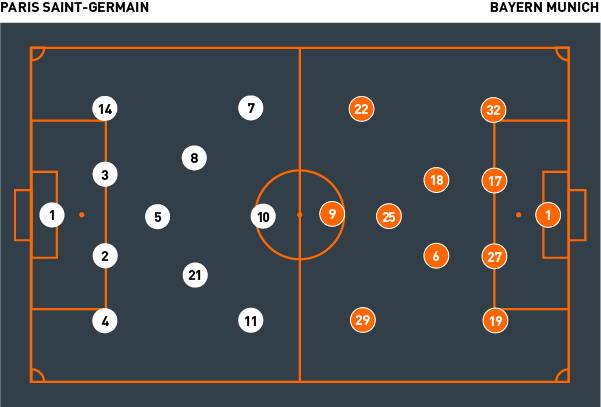 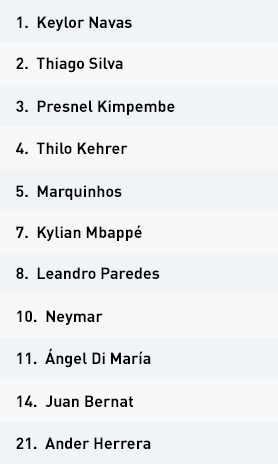 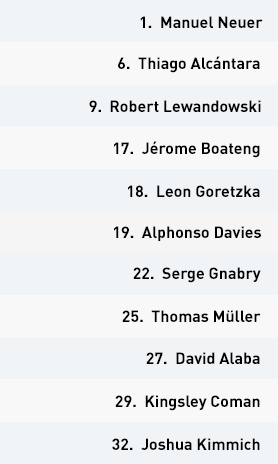 They struggled for possession against opponents who defended with intensity. They first attempted to take advantage of Bayern's high defensive line, and to use, in behind, the pace of Neymar and Mbappé – to the extent that there were occasions when their midfielders didn't lift their heads to look, because they were prioritising executing passes as quickly as possible. With Mbappé making penetrative runs, Neymar sought to unbalance Bayern's defence with his guile, and potentially an additional penetrative run – some promising early goalscoring chances were created from them doing so.

Given their focus was their speed and that they therefore sought to play forwards as early as possible, if possession was established they found it difficult to structure attacks – not least because of the speed with which Bayern would close them down. In those phases they were more reliant on their players' desire to dribble, which often led to possession being conceded, or them winning fouls. Marquinhos was also used in a deeper position, and Ander Herrera advanced into the right half-space while Neymar withdrew into the left; alongside Leandro Paredes they created a central four-on-three. If that became a four-on-two on the occasions Thomas Müller advanced to alongside Robert Lewandowski, PSG still struggled to progress possession because of the intensity of Bayern's press, which contributed to them playing wayward passes or turnovers being made further forwards.


Their finest goalscoring chances came during transitions, when they were instead denied by Manuel Neuer's goalkeeping or poor finishing. There were also occasions when either a poor run or a lack of detail on the decisive pass undermined them. In their semi-final victory over RB Leipzig the same occasionally applied.

The second-half introduction of Marco Verratti was intended to give them greater control and a more forward-thinking midfielder, but he lacked match sharpness and was therefore regularly caught in possession. Against that, Bayern were impressively organised; each player recognised their trigger to go and press. The relentlessness of that press also meant that each time one of PSG's players received possession he did so under immediate pressure. Even if that high press was evaded, Bayern regrouped, and pressed again following the next trigger.

Bayern Munich were organised by their manager Hansi Flick into a 4-2-3-1 formation, and on this occasion Kingsley Coman replaced Ivan Perisic towards the left of that three. They encountered opponents who defended with a 4-3-3.

The Bundesliga champions dominated possession and sought to overcome the high press and mid-block they were being confronted with; the former particularly applied when they were building from Manuel Neuer who, if necessary, was pressed by Neymar, alongside Kylian Mbappé also attempting to press Bayern's central defenders. It was Bayern's full-backs who were most regularly free, owing largely to the reluctance of PSG's to stray from their defensive line, given the risk posed by Bayern's attacking players.

They therefore regularly played to those full-backs, and benefitted from the inconsistent attempts of PSG's forwards to keep them in their cover shadow. Depending on the relevant full-back's positioning, a different midfielder would move to press him; Neymar was often required to withdraw into midfield to take the free opponent that that created; if it was Marquinhos who applied the press, Thomas Müller was instead picked up by Leandro Paredes or Ander Herrera. Bayern consequently increasingly prioritised committing their opponents to wide areas before switching possession to the opposite wing.


If possession had been established in central defence before they did so, PSG withdrew into a mid-block that featured an organised and compact midfield Bayern favoured advancing outside of. Their front four – through, for example, Robert Lewandowski moving on Herrera's blindside from a central position into a half-space while Coman made a diagonal run infield to discourage opponents from following Lewandowski, who therefore received possession – provided options via second-line passes around that midfield.

Bayern complemented those movements with attacking runs from their full-backs that added a further dimension to their attack, and to occupy the relevant wide midfielder – discouraging him from pressing into a wide area so that they could play diagonal passes wide and make diagonal, penetrative runs behind the full-back who had advanced to press in midfield. The progress they made in those wide areas led to them playing crosses into the penalty area, which they often committed at least five players to; those numbers contributed to the game's only goal when, with Thilo Kehrer outnumbered at the back post and the defenders around him poorly positioned, Coman converted Joshua Kimmich's cross.

On another occasion Bayern would have been frustrated with how few high-quality goalscoring chances they created. PSG defended well against those crosses, and their central midfielders worked to deny the two-on-ones Bayern seek, from which they relish playing cut-backs.