Profile
Neymar’s departure for Paris Saint-Germain has perhaps never looked more costly for Barcelona, even given the world record £200m fee they received. Luis Suárez’s decline and the inability, so far, of Antoine Griezmann, Ousmane Dembélé and Philippe Coutinho to convincingly replace him have left Lionel Messi particularly frustrated, and may have even made an overhaul of their squad necessary.

Where Messi, Suárez and Neymar once represented the world’s most lethal attack, Neymar, Kylian Mbappé and either Ángel Di María or Mauro Icardi may have suceeded them, particularly with the Brazilian relishing his prime. “Neymar is one of the best in the world and I’d love him to come back,” Messi said. “He is a very happy person who is always smiling and enjoys himself on and off the pitch. He gave all the players a lift.”

Tactical analysis
Neymar is a particularly versatile attacker who excels when attacking from both the left inside channel and central lane. If he favours starting as a left-sided wide forward, he regularly drifts inside to receive possession to feet. His explosiveness and nimble changes of direction make him difficult to track before he receives the ball, ensuring that he often does so far from his marker, and often far from his starting position; when he does he adds further variety with his ability to pause and again move within his first touches.

That he can do so contributes to him making regular dribbles and covering significant distances with the ball. Complemented by his changes of direction and ability to play to either foot, opponents struggle to anticipate his movements – even if his preference is to cut inside on to his right foot, he is similarly capable with his left – and therefore to defend against him.

There also exists a willingness to withdraw into midfield to help his teammates to advance beyond an opposing midfield line, and to adopt an inside forward’s position beyond that midfield. When in those more central positions he instead attempts to direct play, instead of providing a threat on goal. His impressive balance and control means he can successfully dribble (below) from those positions – perhaps more effectively than any rival – drawing defenders out of position, or play early, accurate forward passes to those further forwards, particularly towards the right inside channel.

If instead in the final third, Neymar is also among the finest finishers in the world, and relishes attacking from towards the left of the penalty area. When attacks are building from the right he has the sense of timing to correctly judge his runs towards the back post; if already in possession he can shoot through crowded penalty areas as effectively as he can when one-on-one, or from the penalty spot. Perhaps the only way in which he undermines his potential is when opponents respond to him by surrounding him with defenders and he still attempts to pause before moving – doing so can concede possession to the numbers around him. 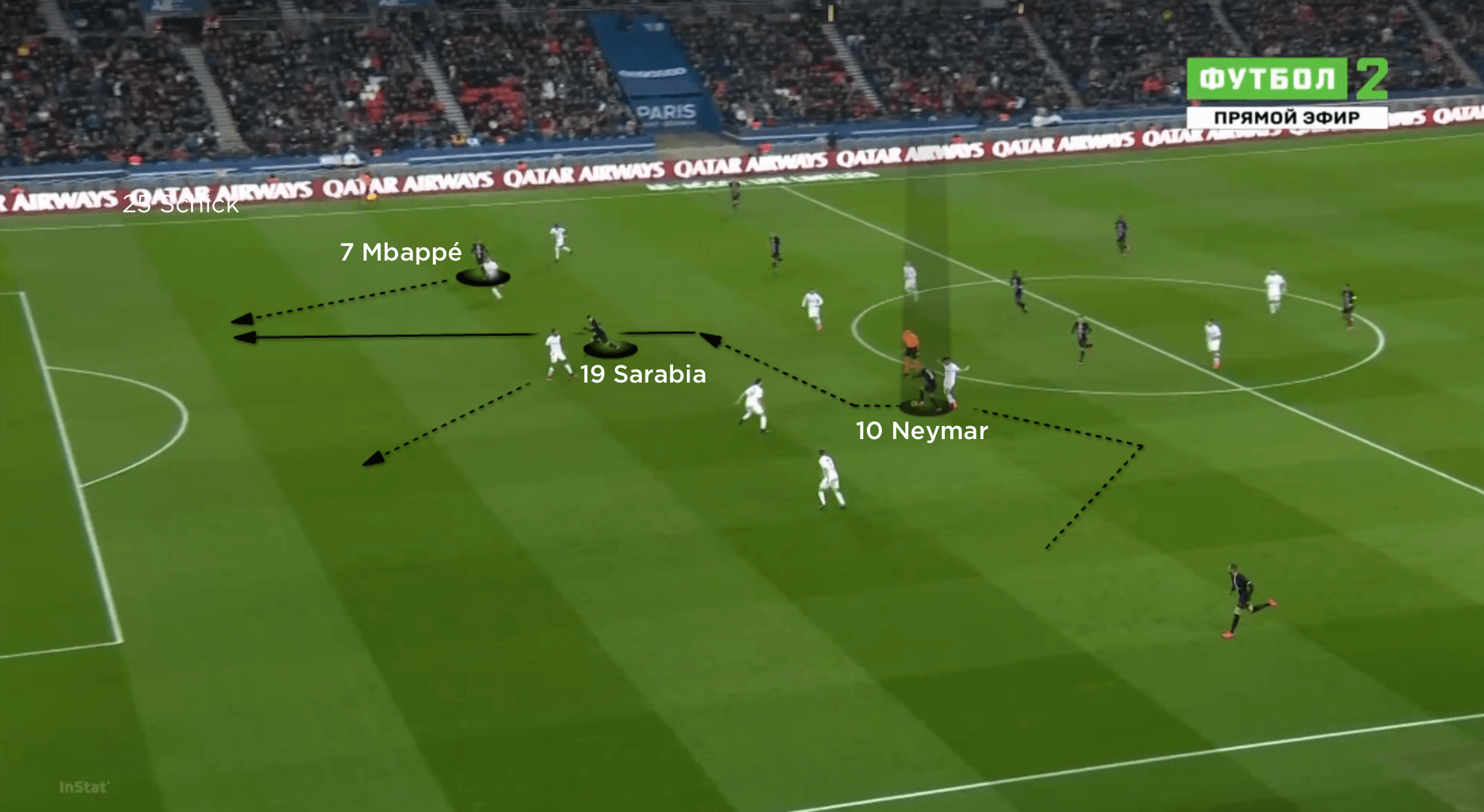 Role at Paris Saint-Germain
Similarly to in Spain, during his time in Paris, Neymar has most consistently been given a role towards the left of PSG’s attack. His first manager there, Unai Emery, mostly favoured a 4-3-3 formation; Emery’s successor Thomas Tuchel has experimented with further shapes beyond that 4-3-3, most consistently a 4-4-2 that becomes a 4-2-2-2.

The width in those systems is provided by their advancing full-backs, meaning Neymar and Di María – who most commonly starts towards the right – combine with the two central midfielders behind them to form a midfield box. Behind the front two of Mbappé and Icardi, making penetrative movements around their opposing central defenders, Neymar provides a vital link by sliding balls beyond those defenders or carrying possession forwards before releasing it via a pass forwards or across goal. 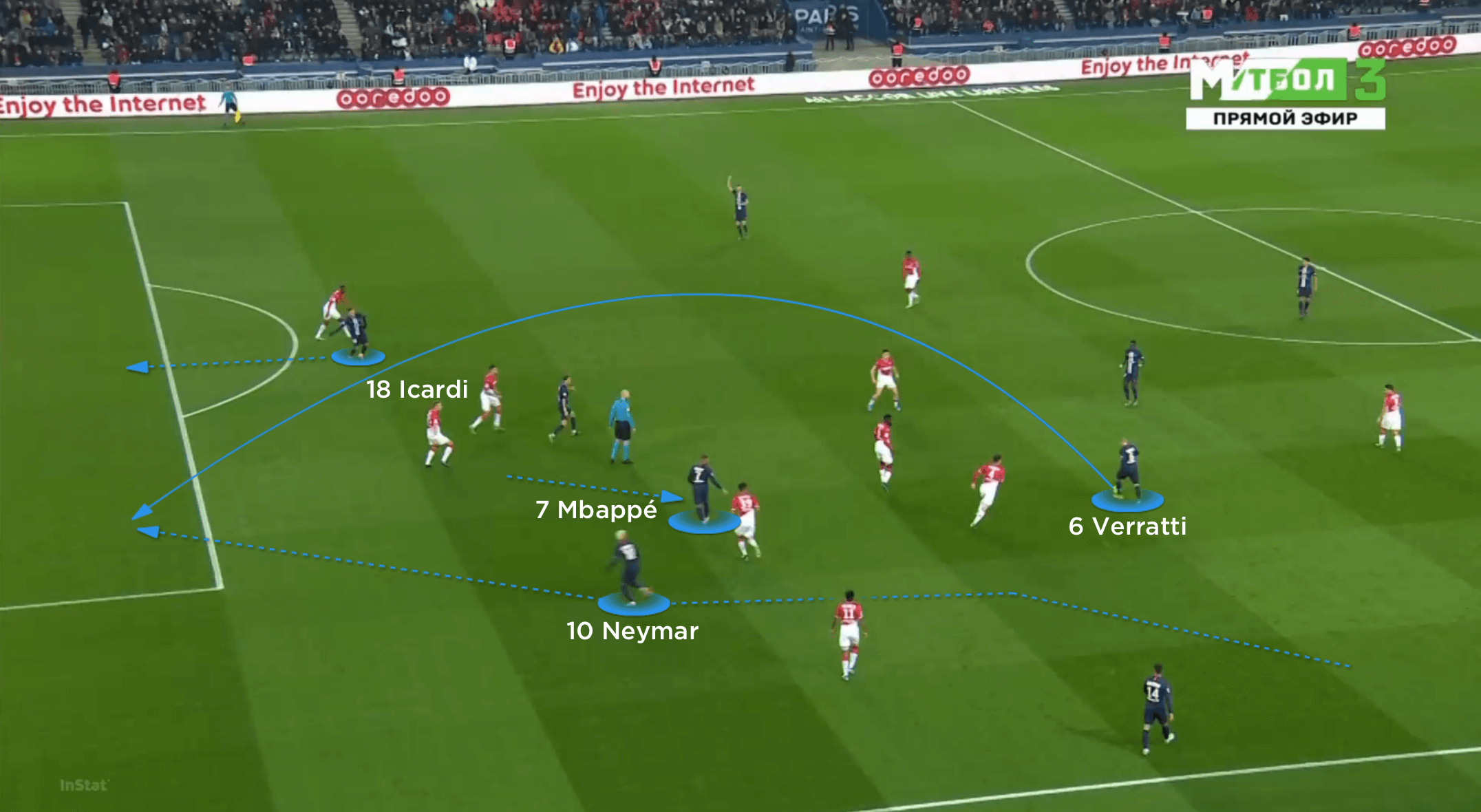 If they are instead attacking with a front three – or Tuchel has organised them to play with a back three – Neymar drifts from his position on the left to operate almost as a number 10, behind the two strikers and the right-sided wide forward moving into a higher and wider position. With a back three, Neymar’s central position is more permanent, and PSG’s width is provided by their wing-backs, making him the most important link between their midfield and attack, and a creative player instead of one to provide the finishing touch.

He and his teammates attack with the freedom so often provided by the double pivot operating behind them, at the base of midfield, to cover both their attacks and the attacking contributions of the full-backs outside of them. After regains Neymar is often their target during transitions, or with the passing range required to advance beyond the crowded defensive blocks PSG’s opponents regularly favour.

The intelligence of his movement and that demonstrated by his teammates regardless means he continues to provide a goalscoring threat. When they withdraw into a deeper position, Neymar offers penetrative runs (above) behind defenders and into the spaces between his two most advanced teammates. It is Icardi who more commonly attempts to link, but he is as capable of remaining further forward as Mbappé is of moving into a deeper position, giving PSG an impressively flexible and clinical front three. 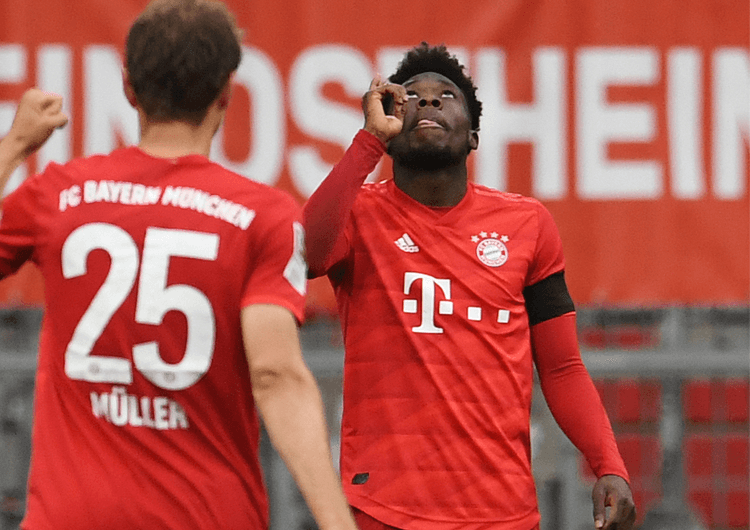 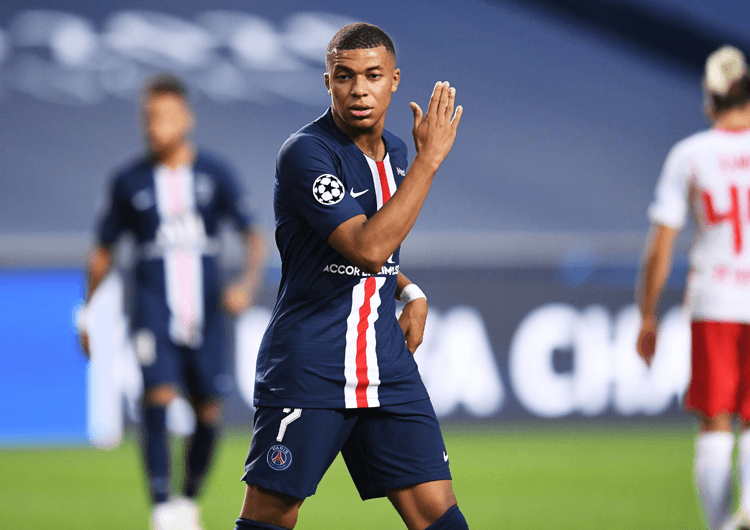 Liverpool and Real Madrid are being linked with Paris Saint-Germain's Kylian Mbappé. We assess what makes the France striker so accomplished