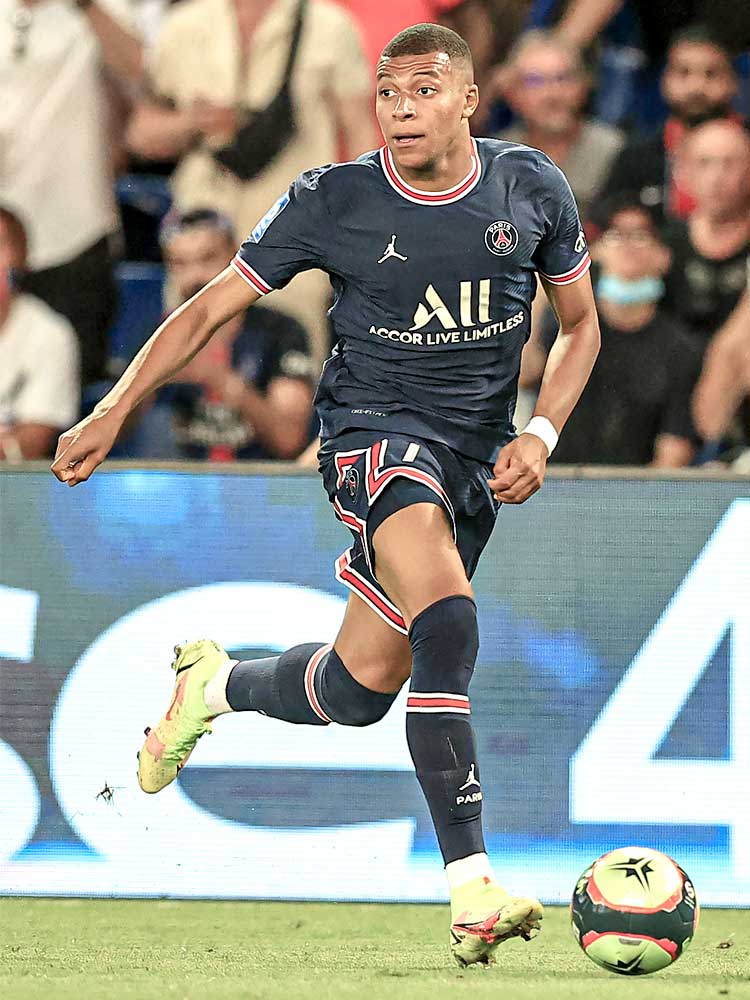 Profile
Kylian Mbappé is firmly established as one of the best players in the world, and he has already won more trophies than most players do in an entire career. During 2015/16 he became Monaco's youngest ever player and soon after their youngest ever goalscorer, and he then led his team to the Ligue 1 title in 2016/17. A €180m transfer to Paris Saint-Germain in August 2017 followed when Mbappé was still only 18 years of age, and he won three more league titles in his first three years there, as well as a World Cup with France. Few players ever reach those heights. Mbappé isn’t a superstar in the making – he is already right at the very top of the game.

PSG's manager Mauricio Pochettino believes Mbappé will, in time, also become an all-time great. “He has the potential,” Pochettino said. “He lacks nothing but time. We cannot speed up the process. I think he's already among the best in the world. It will take time for him to flesh out his CV; to get the recognition he deserves.”

Tactical analysis
The most obvious and striking aspect of Mbappé’s game is his blistering pace and lethal finishing – a combination that will remain, no matter how football evolves, of huge value. Those raw aspects were the reason he broke through at Monaco aged just 16, breaking Thierry Henry’s record as the youngest player in their history in the process.

The comparisons with Henry don’t end there. In his first full season, Mbappé scored many of his goals following a turnover and a straight ball behind the opposition's back line for him to run on to. Though he played largely as a centre-forward, his inclination – much like Henry's – was to pull to the left, cut infield and finish across the goalkeeper with his right foot (below). Like Henry, even when defenders know what is coming, it is hard to prevent him getting in on goal.

Though that has never been the extent of his talents, it does give an indication of the type of player he is. He likes to hang on the shoulder of the last defender and pose a constant threat over getting in behind – perhaps inevitably, throughout his career he has ranked among the players who were caught offside the most times in each Ligue 1 season. Defenders are terrified of stepping up too high, because there are few players capable of catching him.

He is an incredibly composed finisher, and one with considerable variety when he is one-on-one with a goalkeeper. If he is under pressure from a chasing defender, Mbappé lengthens his stride before attempting his finish, giving himself more time to assess the goalkeeper’s position. If he has more time he will shorten his stride so that his shot is taken more quickly and is therefore harder for the goalkeeper to read. He also has the skill to feint a shot and dribble around the goalkeeper in a similar manner to that of the great Brazilian striker Ronaldo.

Mbappé is also such an adept dribbler that it is almost as risky to drop off and allow him space to receive to feet and turn. There are few players more frightening in a one-on-one situation. If he has space to run into, a simple push-and-run will likely beat his opponent, and when he has less space he can change direction quickly and escape. In Ligue 1 in 2020/21, only two players made more successful dribbles per game than Mbappé – Rennes’ Jéremy Doku and Bordeaux’s Hatem Ben Arfa, who between them scored 23 goals fewer than Mbappé did alone. He is so much more than just a finisher or dribbler – it is the combination of his skills that makes him such a formidable forward.

Role at Paris Saint-Germain
Mbappé tends to play as the furthest player forward in a 4-2-3-1 or 4-3-3 under Pochettino. However, both he and Neymar, who usually plays as a number 10 or on the left side of their attack, are given lots of freedom and dovetail constantly in an attempt to pull the opposition’s defenders out of shape. Though Mbappé will happily move to the wing, he will generally stay high up the pitch to push the opposition’s defenders back and create space for Neymar, Lionel Messi, and other attacking midfielders such as Ángel Di María and Pablo Sarabia to operate in. In the absence of Neymar, Mbappé has also played on the left with a more traditional centre-forward such as Mauro Icardi through the middle.

Mbappé is not only lightning quick across the ground, he also shows greater speed of thought than most defenders, spotting opportunities to run in behind before his opponents, and exploiting the space he creates for himself to devastating effect. If there is space for a midfielder to receive and turn between the lines, Mbappé sets off early on a run beyond the opposition’s defence (above). His teammates will know what he is doing and will often look to play a pass into the space in behind after only the quickest glance to see where he is headed.

As teams have become wiser to his most apparent threat, and his pace alone has become ever so slightly easier to predict, Mbappé has also added guile to his repertoire. Sharp bursts and changes of direction increasingly play a crucial part in what makes him so lethal in the penalty area. He has built a brilliant understanding with PSG's main creators, Neymar and Di María, and knows precisely when to make his move when they are on the ball.

Mbappé often curves his run around the back – and out of the line of sight – of a defender to lose his marker (above). His pace and the intelligence of his movement, combined with his composure in front of goal, makes him a truly world-class forward.

When his team is without the ball Mbappé presses willingly. He proved he is capable of pressing with intensity under Thomas Tuchel and the arrival of Pochettino has meant a continuation of PSG’s attempts to win the ball back high up the pitch. Mbappé chases the ball down and puts opponents under pressure when he has little chance of winning it but can influence his opponent’s clearance (above), which can lead to a teammate recovering possession. His acceleration is particularly helpful when doing so, because a sudden burst of pace towards the ball can have a big impact in helping his team create chances through their pressing.

Mbappé’s rise so far has been truly remarkable, and the most worrying thing for defenders across France and Europe is just how much better he may yet become.