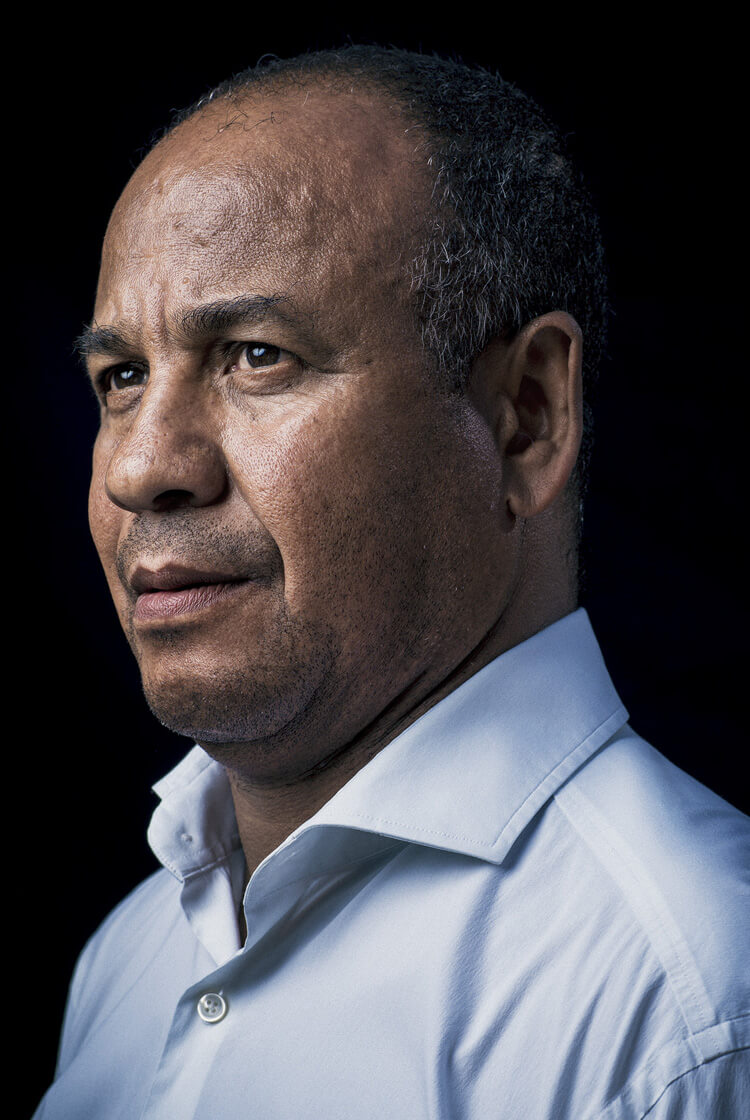 There was no plan.

Nothing in my career had told me to move overseas.

As a player, I had received a lot of offers.

Barcelona tried to sign me in 1982. After that, Tottenham. In 1984, Juventus, where Michel Platini was already playing.

But my president at Bordeaux, where I played for eight years (below), didn't want to sell me. Back then, we were disciplined. When the president said no, it meant no.

As a coach, I turned down Barcelona again. Valencia, too. I didn't feel ready to go to Spain.

So England? Not at all. I didn't plan that.

Really, it was coincidence.

The former director of adidas came to see me in Marseille. He was with Bill Muddyman, then the vice-president of Fulham, and I ended up going to see a match or two.

The first time I walked into Craven Cottage, I told myself: "This is not a big stadium!"

I was used to seeing bigger stadiums, but I found it very pleasant. The atmosphere was nice, and it was a project that appealed to me.

The project was to build something. I prefer to build – or, in some cases, rebuild – something than to take on a team that is already at a high level. Fulham hadn't been in the top division in England for many years. This was ideal.

We had to rebuild everything, from the training to the methodology. But the chairman, Mohamed al Fayed, gave us the means. Every time we asked for something, the answer was yes. It was all for the progression of the club.

"I still see Arsene now. Every year I try to spend a few days in his company. It's always a pleasure"

I wasn't the first French manager in England. Arsene Wenger and Gerard Houllier were already there, respectively at Arsenal and Liverpool, and I had a good relationship with both.

When I arrived in London to sign my contract, Arsene called me and we went for dinner. There was no sense of competition, no pressure. On the contrary, he welcomed me, and we talked a lot about the managerial code in England. In each country, it is different.

I still speak with Arsene now. Every year I try to meet up with him, spend a few days in his company. It's always a pleasure. We don't set the whole footballing world to rights, but we talk about things all the same.

At every club I coached, we were the first team to start pre-season. I always liked to be first, to come back earlier and take things slowly. Step by step, to avoid injuries. Sometimes, if you come back later, you can overload players in training, and they get hurt.

For me, the first week was for tests – medical checks, blood tests, radiographies – and to take a look at how the players had taken care of themselves during the holidays. Kind of a refresher course.

When we started at Fulham, the players were carrying a few too many kilos. I brought in a dietician to create more balanced dishes, but we changed everything. After that, no alcohol. No beer after the match. No. See you later.

I wanted everyone on an equal footing. If I saw in the morning that some players were bleary-eyed, they went to see the doctor and had a little test.

This approach gave us an enormous advantage. Physically, the players blossomed.

An example: when I arrived, Rufus Brevett was injured, trained alone, limped all the time. Soon, he was transformed. He had three magnificent years.

"When you don't have the ball, you are not strong. You are obliged to fight to get it back. So we don't lose the ball. We keep it"

That first season, promotion wasn't an aim. It was an obligation. We had to go straight up to the Premier League.

The first player I wanted was John Collins.

On the pitch, John (below, right) was hyper-intelligent. In his positioning, in his movement.

Off the pitch, he was something different. I had signed him when I was coach at Monaco, and in three months he was speaking French fluently. That's crazy. He was always studying, always listening to the other players. He was close to them immediately, and in six months it was like he had been at Monaco forever. Of all the footballers I have known, either as player or coach, he is the one who adapted quickest.

Elsewhere, I had taken risks. I didn't want to keep the centre forward Geoff Horsfield, so I had signed Louis Saha, who arrived from Metz. He wasn't playing there, so people didn't really understand – but I knew that little Louis had quality, and working to improve young players was my thing. Others, like Luis Boa Morte and Steed Malbranque, would follow.

We changed the tactics, too.

Every time, with the goalkeeper, it was a long ball, playing for the second balls. Not for me. I wanted to pass the ball out from the back.

"When we have the ball, we're very strong," I told the players. "When you don't have the ball, you are not strong. You're obliged to fight to get it back. So we don't lose the ball. We keep it."

"If you put any old oil in a Ferrari, it will stop. If you put pure petrol in, it will keep going"

In one of our early games, our defender Andy Melville risks a pass. From it, we concede a goal. He told me a while back, when I last saw him, that he came into the dressing room expecting me to yell at him. On the contrary.

I tapped him on the shoulder: "Keep playing like that. It is no big deal. I want you to continue."

We wanted to prolong careers, too. Melville was one, Barry Hayles another. Barry (below, with Saha) was capable of playing, but when I arrived he was a bit round. He didn't want to fight, track back, tackle. After six months, he felt liberated. He was a good player. He could easily have played in the French league.

As long as an older player is professional, he can keep his career going easily. I saw that when I signed Edwin van der Sar. Edwin was already 30 when he arrived at Fulham, but look at the career he had after that point.

That is why you must be professional, look after yourself. I always have this phrase: your body is your business. Footballers are like Ferraris. If you put any old oil in a Ferrari, it will stop. If you put pure petrol in, it will keep going.

My first season at Fulham started with a run of 11 league matches, 11 league wins.

For me, it was all about the league. But it was good for the players to see they could play at a higher level, and that came in the cup competitions.

In the League Cup, we were knocked out by Liverpool. In the FA Cup, it was Manchester United. But we were not far off. Sir Alex Ferguson came to congratulate me after the game, because we had tested them. We played well.

They were defeats, but at the same time they were victories for us, the coaches. We could say to the players: "See, you are capable of competing with these teams. We can achieve more things, better things."

That allowed me to raise the bar in training. To take things up a level. To demand more.

"In England, there is a spirit of helping the manager to succeed. That was a fantastic experience for me. You don't find it in France"

At the end of the year, we were promoted to the Premier League. In my second season, we reached the semi finals of the FA Cup. We played in the Intertoto Cup, and qualified for Europe for the first time in the club's history.

If I was to choose one memory from my time at Fulham, though, it would be a game at Blackburn towards the end of my first season. We played half the match with 10 men, but Sean Davis scored a 90th-minute winner – it was the moment when promotion was all but assured.

It was the first and only time that I jumped off the bench to hug my players. The only time in my whole career.

That night, the players asked me: "Can we have a beer tonight?"

We had a match three days later, at Huddersfield. I said no. Maybe I should have said yes. I do regret that a little. Maybe they drank in their rooms and I just didn't know about it.

I spent three seasons at Fulham, and it was a blast.

I speak about the fellowship I felt with the fans, the public, at the clubs I coached in France. Lyon. Monaco. But it was the same at Fulham. A real communion.

What I remember most, though, is the professionalism of the people at the club. It was a magical thing. In France, you have to ask 10 times if you want to get something done. Even 20 times. In England, you ask anyone – it doesn't matter who – and they are at your disposal right away.

There was a spirit of helping the manager, helping him to succeed. That was a fantastic experience for me.