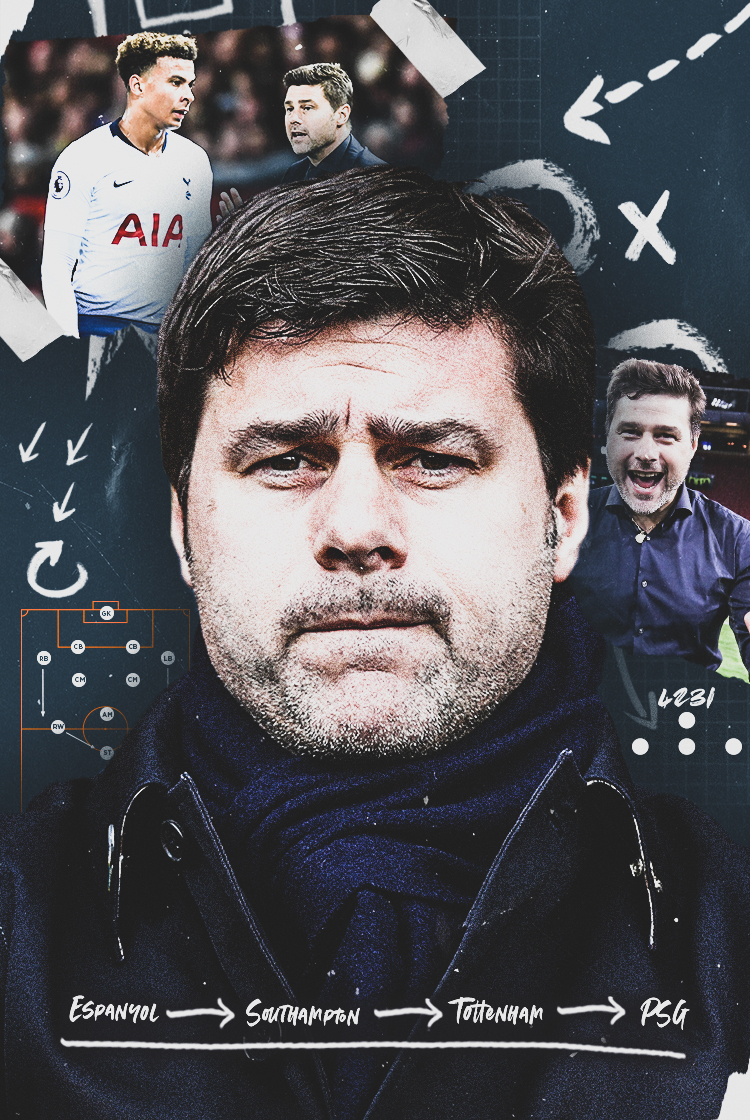 Having built his reputation on impressive work at Espanyol and Southampton, Mauricio Pochettino went on to make a name for himself on the global stage at Tottenham. There, he turned a side that had previously punched at around its financial weight into Premier League title contenders and Champions League finalists. Although silverware eluded him, the job Pochettino did at Spurs made him one of the game's most highly-rated managers.

A move to big-spending Paris Saint-Germain followed, but Champions League glory – which the owners crave desperately – was beyond him. Winning Ligue 1 – the first league title of Pochettino's managerial career – will only have fuelled his desire to win more trophies, but it remains to be seen whether he is best suited to managing a team of stars like PSG, or whether he would be best off targeting another Tottenham-like rebuild project.

Here, we take a deep dive into how Pochettino's previous teams played, his favoured in-possession and out-of-possession approaches, and what might have gone wrong at PSG.

Pochettino’s first three sides – Espanyol, Southampton and Spurs – were all recognised as attack-minded teams under his lead. Through a combination of quick offensive transitions and positional play (below), his teams almost always played on the front foot. These teams tended to play in a 4-2-3-1 or a 4-3-3 while attacking, and defended in a 4-4-2 or a 4-1-4-1.

Pochettino insists his teams build possession from the back. From the first pass, he wants to create numerical advantages to work the ball forwards and reach the attacking half in an organised set-up. The centre-backs drop either side of the goalkeeper, while the defensive midfielders take up positions to form triangles around members of the opposition's front line (below). These local overloads are used to create passing lines out from the back.

His teams' attacks are heavily influenced by the full-backs. At Southampton, Luke Shaw and Nathaniel Clyne were key; at Spurs, it was Danny Rose, Kyle Walker, Kieran Trippier and Ben Davies. While at Southampton, Pochettino only ever used back-four systems, at Tottenham he also used those players as wing-backs in front of a back three. The width his full-backs or wing-backs provided helped his teams bypass opponents applying a high press, with the goalkeeper able to play direct balls out to them. In attack, they helped create overloads in dangerous positions and stretched the opposition's defence, which then encouraged penetrations inside the opposing full-backs. With the full-backs so advanced out wide, supporting forwards were encouraged to get closer to the lone striker.

Harry Kane developed into one of the best strikers in the world under Pochettino, and he became increasingly versatile over the course of his time under the Argentinian. His improved passing, and willingness to withdraw into deeper positions and link play, invited quick players to run beyond him. This ensured Spurs continued to offer a transitional threat despite the fact that they dominated possession more as time under Pochettino went on. Rickie Lambert did a similar job at Southampton, where he was supported by Adam Lallana and Jay Rodriguez.

Spurs and Southampton both tried to maintain an asymmetrical attacking shape, though their rotations were similar on both left and right. For Spurs, Son Heung-min drifted infield  to combine in central areas with the number 10 (below) or run beyond the opposition. In doing this, he was sometimes a secondary number 10, and sometimes a striker threatening the opposition goal. The wide player on the other flank – often Dele Alli or Christian Eriksen – also came infield to create central overloads and leave space out wide for the full-backs to attack into.

In Paris, Pochettino continued to use a 4-2-3-1 or 4-3-3, though he also experimented with a 4-4-2. PSG also implemented his recognised attacking patterns, with their width provided by overlapping full-backs, and Kylian Mbappé and Neymar attacking infield. If Neymar played on the left, he moved almost permanently into the inside left channel to receive to feet.

If Mbappé played there, he played more like Son, providing lateral runs infield to receive to feet, and instinctive, striker-like movements in behind (below). Skilled central midfielders such as Marco Verratti would often look for Mbappé's direct runs following attacking transitions – particularly after a regain in the attacking half.

When PSG came up against organised defensive blocks – a common occurrence in Ligue 1 – Mbappé had to vary his movements cleverly. Subtle double movements were used to lose his marker to receive between the lines or in behind opponents. These were intricately co-ordinated with the brilliant passing of the PSG midfielders.

The challenge in Pochettino's final season came in finding a system that could fit Mbappé, Neymar and summer 2021 arrival Lionel Messi. In domestic games, all three could play along with Ángel Di María in a 4-2-3-1 formation. Di María would play on the right, with Messi in behind Mbappé, and Neymar on the left. When PSG came up against stronger opposition, though, Di María dropped out, and they set up in a 4-3-3, with Messi on the right, Mbappé on the left and Neymar through the middle. None of the three stuck to their positions, though. They rotated consistently, with Messi and Neymar tending to come looking for the ball and Mbappé a constant threat in behind (below).

This star-studded front three proved difficult to manage, however. Although there were signs of Pochettino in their narrow shape and overlapping full-backs providing the team's width, problems arose when the team lost possession. The front three were not able to press with the kind of intensity Pochettino demands, which led to an interesting change to his out-of-possession approach.

Establishing numerical superiority is also a priority when Pochettino's teams defend. His early teams were recognisable for their intense pressing high up the pitch and eye-catching goals scored after a regain in the final third. Their possession-based positional play led to extended periods camped in the opposition's half. This meant that, after losing the ball, they had lots of attackers close to the ball to quickly counter-press in an attempt to win it back. They also took a front-foot approach to restarts, pressing the opposition centre-backs at goal-kicks, for example (below).

It is for this reason that Pochettino likes to field attackers who are capable of lots of short, intense bursts. Any players he inherits who can't deliver this intensity off the ball are quickly excluded from his long-term plans.

For all of his positive experiments with a back three, he continues to favour the structural stability that comes with a back four becoming narrow when the team first begins to press. Should either full-back in the back four be required to advance, a defensive midfielder withdraws into defence to maintain the back four. Pochettino requires versatility and lots of hard work from his players.

There have been plenty of occasions throughout Pochettino's managerial career, however, when he has decided against using a high press. As the years have passed, intense pressing has become a less important element to his teams' play. That adaptability has led to some of Pochettino's most famous victories, particularly at Tottenham.

He has shown an ability to set his team up in a compact, organised shape in a mid-block, in which the priority is blocking off passing lanes through the centre of the pitch and forcing play wide (above). This was the basis for much of Tottenham's run under Pochettino to the Champions League final in 2018/19.

Pochettino's PSG side showed similar variety in how they defended, though in domestic competition the high press was often the favoured approach (below). In 2020/21, the front three pressed aggressively, supported by the defensive midfielders, who he asked to defend on the front foot. The full-backs were encouraged to step out and engage their direct opponents, while the central defenders held an aggressive high line.

Following Messi's arrival, however, it was difficult for Pochettino to stick with his preferred high press. It became more common for his team to engage their opponents when play reached midfield.

Play often bypassed the front three easily – sometimes there was a press, but the presence of a late-career Messi often made any press ineffective. Instead, the trigger to press was a pass into central midfield to a player facing his own goal. At that point, PSG's energetic and athletic central midfielders jumped out to pressure the ball (below – in this example, Neymar presses from behind the ball after filling in for the advanced Ángel Di María). When there was an opportunity to win the ball and they did press, PSG still looked very much like a Pochettino team in their intensity. They did, however, struggle against better sides that enjoyed playing out from the back under little pressure.

Against stronger opponents, PSG looked far more comfortable in a mid-block (below), and Pochettino selected combative and enthusiastic midfielders behind his first-choice front three. The front three stayed narrow and screened passes into central midfield, while the wider members of the midfield three remained ready to move out and press the opposition's wide midfielders.

Despite being set up to defend, Pochettino was always thinking about what happened if his team won the ball. Mbappé stayed highest of the front three, braced to spring forward and attack the space behind the opposition if the ball was won.

Despite being roundly thought of as a coach who asks his teams to press with intensity, Pochettino has displayed an impressive adaptability over the course of his career. That said, there are consistent themes to his teams. It is likely that those will remain wherever he ends up next.

Ultimately, the Ligue 1 title will not be enough to keep Pochettino in a job at PSG, and despite doing such a remarkable job at Tottenham, there are still plenty who believe he still has much to prove at the highest level. Having proved he can get his teams to play attacking, eye-catching football, success and trophies might well be necessary for Pochettino to silence any critics.