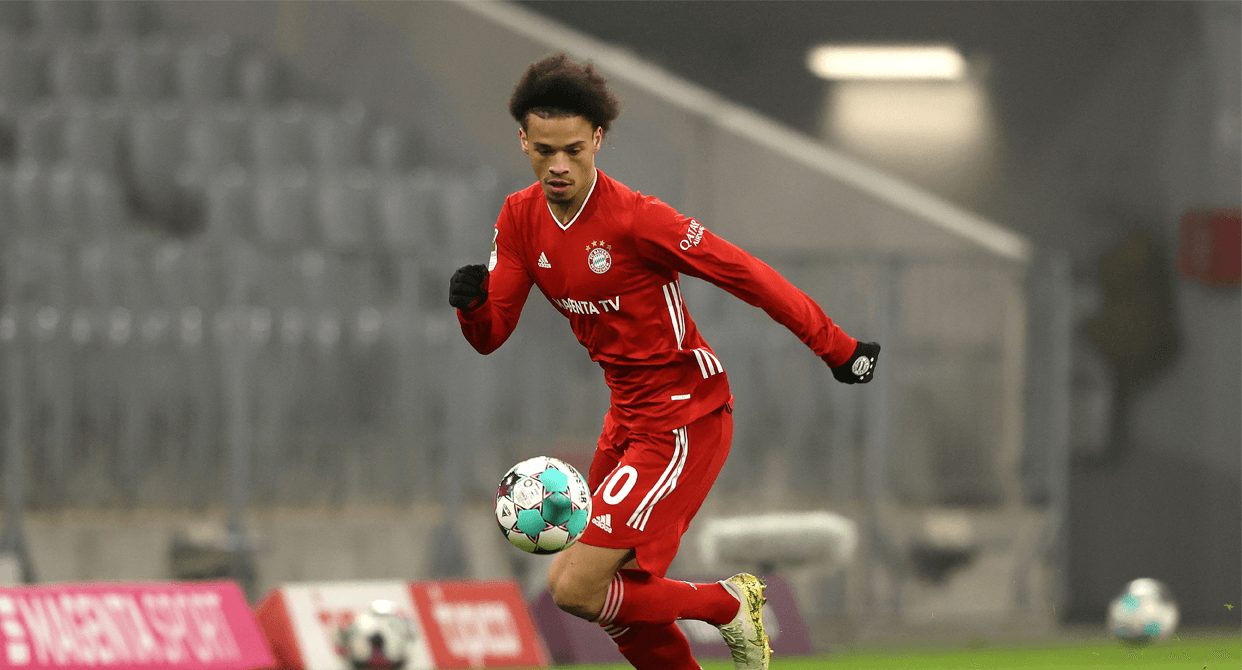 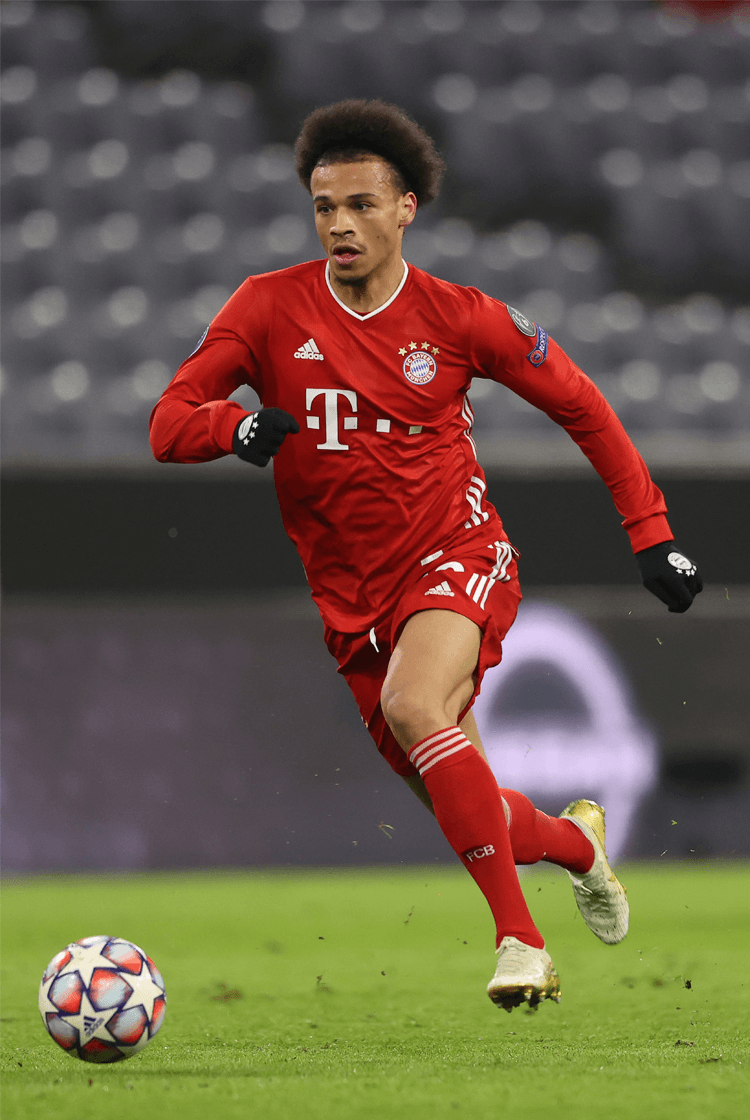 Profile
Bayern Munich were widely considered the finest team in the world when they parted with £44.7m – a fee that could yet reach £54.8m – to recruit Leroy Sané from Manchester City, who only two years earlier were held in a similar regard. Aged 24 when he moved from Manchester in July 2020, the Germany international was considered capable of not only making an immediate impact in Munich, but of becoming one of the key figures in the team that will eventually replace that long led by Thomas Müller and more.

“Leroy has outstanding qualities — he is an artist," said Bayern's manager Hansi Flick. None other than Pep Guardiola, among Flick's predecessors at Bayern, also once made him a significant figure in his team at City. Sané himself said of his four years under the Spaniard: "In positional play, in the general perception of the entire game, in tactical behaviour both offensively and defensively, Guardiola downright reprogrammed me."

Tactical analysis
The left-footed Sané is the most explosive of wide forwards, and one most effective when attacking from a wide starting position. His ability to beat opponents with his pace is his greatest strength – he can compete with the very best over even lengthy distances – and is complemented by a similarly impressive ability to accelerate, and to explosively move or dribble through limited spaces. That he remains so balanced while doing so means him nimbly avoiding tackles and duels, and therefore being capable of driving past opponents instead of requiring a trick or turn. Defenders regularly attempt to slide across him when no longer able to match his speed, but he is similarly adept at skipping over their challenges and then recovering his balance.

When attacking from towards the right side of the pitch, Sané favours making diagonal runs in behind his opposing full-back and then shooting across goal or playing cut-backs to a forward-moving teammate. If he is instead confronted by a deeper defensive block and short of the space he relishes, he will adjust by pulling wider, drawing his opposing full-back towards him, attempting to receive to feet and then driving across that full-back and into the inside channel before crossing towards the far post.

A similar approach is used when he receives possession within a mid-block, but the lofted delivery over the furthest central defender is instead replaced by a through ball to those making runs from wide on the left. An alternative approach involves him shooting after moving infield (below) from a wider starting position against a deep-set defence; he takes further touches to when he is instead looking to cross, and then aims towards the far corner.

If attacking from the left, Sané most commonly does so around the outside of his opponent before sending a low cross to in front of goal for those making forward runs. From the left those crosses are largely driven; from the right they are more likely to be chipped. If shooting at goal from the left, he is most effective when moving in behind instead of dribbling across opponents, as he does from the right.

Defenders have learned to force the ball on to his weaker right foot when he is attempting to move in behind through the right inside channel, in the knowledge that his accuracy is reduced when he is using it to work the ball back across goal, but he has adapted by disguising shots with his right by again cutting back on to his left.

When required to defend he can effectively press, and can complement doing so with his speed. He rarely directly makes regains, but the pressure he provides contributes to a wider pressing effort, often by forcing possession towards the touchline with an out-to-in press that leads to a teammate instead recovering the ball. That he can cover ground so quickly also means him regularly being the first to loose balls.

Role at Bayern Munich
Throughout 2020/21, Sané has been used almost exclusively by Flick towards the right of Bayern’s 4-2-3-1. During build-up play on the left, he seeks to drift infield to support Robert Lewandowski and Müller – Bayern’s two central threats as their number nine and 10. When play has developed towards the left, Sané provides the cut-back option for crosses – Lewandowski and Müller attack aerial balls and compete with opposing central defenders – or moves in behind in the pursuit of low deliveries. Kingsley Coman delivers the most crosses at Bayern, and the frequency of his deliveries means Sané spends a considerable amount of time making supporting runs in front of the opponent's defence, ready to attack cut-backs or half-clearances.

Serge Gnabry, an alternative to Coman, poses a reduced crossing threat from the left, and often moves permanently into the left inside channel to provide closer support to Lewandowski; from behind him Alphonso Davies overlaps to provide their width on the left. With Gnabry closer to Lewandowski, Müller focuses his movements towards the right, therefore supporting inside Sané. Bayern consequently attack with two pairs in an extremely offensive front line (above) that is supported by the double pivot at the base of midfield and around the outside by two adventurous full-backs.

During Bayern’s right-sided attacks, Sané is supported from full-back by Benjamin Pavard, but because Sané frequently holds his wide starting position on the outside shoulder of his opposing full-back, Pavard’s overlapping runs are often delayed. He commonly waits until Sané has received the ball and started to move infield before making his run outside of him. Most of Sané’s crosses (above) are therefore delivered after taking several touches, inviting at least one defensive midfielder to join Müller and Lewandowski in the penalty area. Both Leon Goretzka and Corentin Tolisso have demonstrated a willingness to make late forward runs; Joshua Kimmich remains deeper and supports from behind the ball as, temporarily, a single pivot.

Sané’s crosses are mostly played from a more withdrawn position in the inside right channel; Pavard offers an overlapping run into a deeper and wider position, and Sané either uses that run to create space for himself or to slip Pavard in. When Sané drives around the outside, Pavard moves into a narrower position of support and is positioned to provide a link to those in central midfield and assist in switching play towards the left. Gnabry, Douglas Costa, Coman and Sané all enhance Bayern’s superbly efficient attacking transitions, because the speed of each often results in instant access in behind or into the spaces between the lines. Should Bayern regain the ball in the middle third, Müller, or occasionally Lewandowski, will withdraw away from the opposition's central defenders and link to Bayern’s wider runners, who offer a constant penetrative threat on the break.