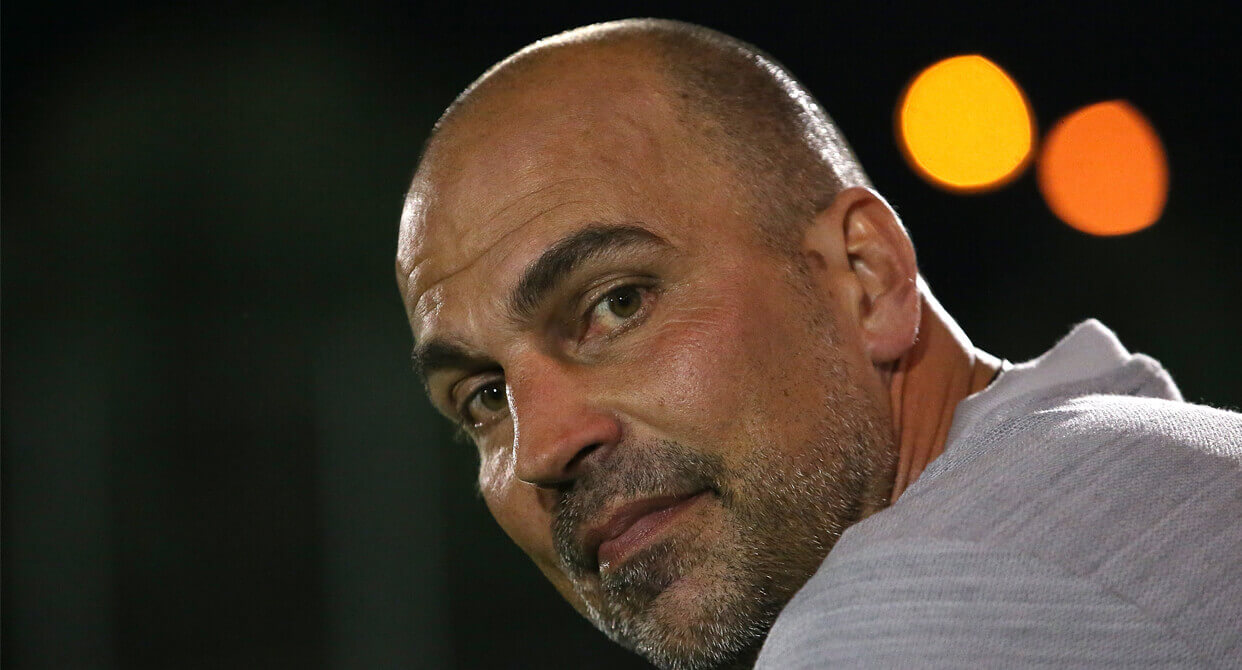 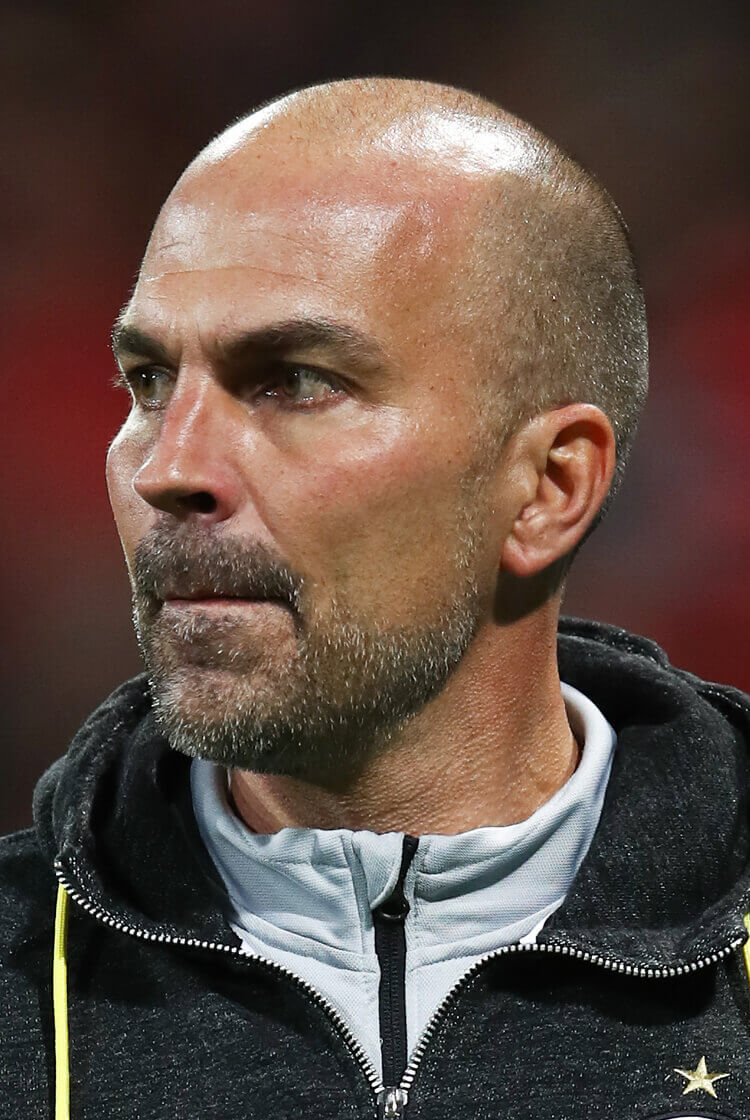 Even now, I go mad if I see the pictures from that game.

The Champions League final, 1999. Bayern Munich versus Manchester United. A game that I will never get out of my head.

Every time I think about it, I ask myself: “My god, Markus, what did you do?” It’s not just about the defeat.

Of course, that is really hard to accept, because I think we were the better team in this game. If we score the second goal, then I think the game is finished. But the post was always there, or the crossbar. Or Peter Schmeichel.

To be totally honest, though, when the whistle went I was happy it was over.

It was always my biggest dream to win the Champions League. I would give my European Championship back for that. For me, it’s the biggest title you can win.

But, in the final, I put so much pressure on myself that I couldn’t enjoy it. All I could think about was not making a mistake.

I couldn’t run any more. Not because the game was physical but because, mentally, I was just so tired. In English, I think you would say I was fucked.

It was only in the weeks and months afterwards that I realised what I had done. "Markus, you dickhead, what did you do? Not many players have the chance to play in a final. You did, and you couldn’t enjoy it." It’s really sad.

"A coach who does everything perfectly – this is not possible"

Playing at a club like Bayern Munich teaches you a mindset. You have to win. It started in the youth. At first, I couldn’t understand it. You’re 10 or 11 years old; you finish second and the youth co-ordinator is telling you that it’s not good enough.

You think: "What is going on here?"

In youth tournaments, everybody was always booing us and celebrating if another team beat us. That's when you learn the mentality. "Okay, everyone is against us. So we have to show we are better than them."

It’s a process. One that I started at 10 years old.

At Bayern, I was learning all the time. In the beginning, when I went back there after two years in Hamburg it was hard for me because I wasn’t playing. I wasn’t sure if I had made the right move going back.

But Giovanni Trapattoni was the coach at the time, and he spent many hours working with me on my technique. Just him and me. I improved a lot, and after five or six games he threw me in. After that, I was playing regularly.

From every coach along the way, you learn something different. Otto Rehhagel had the best team meetings. He told all the stories, and we were always laughing. Later in my career, I recognised what he wanted to do – he wanted to take your nerves away before games.

"On the radio, I heard that: ‘Babbel is going to Real Madrid’"

There was always something good to take from each coach. Of course, there were a couple of things that were not so good, but show me a coach who does everything perfectly. This is not possible.

I had one coach who always shouted at the young guys. If you’re shouting at the 18, 19, 20-year-olds, then the club has a bigger problem than you expect. If you shout at anyone, it has to be the big players, because you expect top performances from them. They are the ones who make the difference.

If they’re not performing, you can’t shout at the 18-year-old guy. He is not the problem.

Growing up in Munich, we used to see highlights of one Premier League game a week, but that was enough for me to become fascinated with English football. Tottenham Hotspur, Liverpool, Manchester United – I can’t tell you why, but it was always special for me.

At that time Italian football was maybe bigger, but I wasn’t interested in it. The same for Spain or France. I said all the time: “If I go away from Germany, the only country where I will go is England. Because I like the football. I like the supporters, the stadiums, the atmosphere. If I have the chance, then I go there.”

Then, of course, I had the luck with Liverpool. A special team.

The funny thing was, I was on the way to the airport to meet with Gerard Houllier and talk to him when on the radio I heard the news: “Big transfer from Bayern Munich: Markus Babbel is going to Real Madrid.”

"Steven Gerrard had very good technique and talent, but in the beginning his management of power wasn’t the best"

Apparently I’m going to Real Madrid. But in one hour I will be on the plane to Liverpool.

In Liverpool, I had a good chat with Houllier (below). He explained what he wanted me to do and where I’d be playing. I had a good feeling about it.

I went to a game and sat thinking: “I have to do it. This is exactly what I want.”

Liverpool is a big name, even in Germany, and everything was there. The atmosphere. How they were talking to me. I won’t lie. The money was top, too.

The biggest problem in English football at that time was they were not 100 per cent professional. On the pitch, they gave everything. Outside the pitch, they loved a drink.

But Houllier changed this. He took all the players out who loved to drink, and brought in many young players along with experienced guys like me, Didi Hamann, Jari Litmanen and Sami Hyypiä. It was a good mix.

In the beginning, the foreigners were a little bit outside of the English guys. I understand it – it was their club. Some of them came from Liverpool, so for them it was something special. To them, we were some foreigners who came in and got good money, but they didn’t know how much we’d help the team.

With time, they saw that I was performing – not just coming in and taking the money. That, every game, I tried to bring 100 per cent. In the end, I had their respect.

"If you want to enjoy life to the full and also want to be a professional footballer, this is not the best combination"

One player who you could always see had a big talent was Steven Gerrard. For his age he had very good technique, but in the beginning his management of power wasn’t the best. In every single second, he gave 100 per cent.

So after 50, 60 minutes, he was very tired, or picked up injuries. He was always full speed or nothing. He had to learn to slow down; to choose his moments. It comes with experience, but he learned quickly.

My second season at Liverpool started strangely. I played in the European Super Cup against Bayern Munich in Monaco, and after the game I felt really tired. I looked at myself in the mirror and saw I was white like a wall.

I knew the doctor from Bayern Munich was very good, so I went to see him: “Ja, you look shit.”

I went to Germany for some tests, and that’s when it started. I had the Epstein-Barr virus. A few months later, things got worse. The virus led to Guillain-Barré syndrome. This is something that affects the nervous system and can attack muscles all over your body.

Nobody could tell me how long it would take to get better. If you have a broken leg, you know it’s six months, plus or minus one or two.

But the problem with this is that it changes. I was a different person to the next one – he was lying there for two years. I was only sitting in a wheelchair for five weeks.

It was a very tough period, though. In this moment, you’d give everything away – all your money, all your success – just to come back healthy.

"As a single man, England is a paradise city. If you go out, it’s very easy to do stupid things. I had to leave the country"

The experience changed a bit inside me. After this, I wasn’t the same person as before. I saw how quickly life can change, so I started to enjoy life. If you want to enjoy life and also want to be a professional footballer, this is not the best combination.

I was going out a lot. Drinking a lot. Smoking a lot. I wasn’t professional. Also, in this time I got divorced from my first wife, so had many private problems as well.

If you want to come back at the highest level, you need discipline. But, for one or two years, I couldn’t show this because I was living. I was really living.

It was a problem for Liverpool. They saw me, a top professional who had played 60 games from 63 games, going out drinking and smoking. For them, too, it was very difficult. It took probably two and a half years for me to get back to being a bit more normal, but for me it was clear – if I want to come back to 100 per cent professional, then I have to leave the country.

Because, as a single man, England is a paradise city. If you go out, it’s very easy to do stupid things.

I went to VfB Stuttgart. Three years later, we won the Bundesliga, which was unbelievable – like winning the Premier League with Leicester. But I was never back to 100 per cent as a player, because I never ever got the feeling fully back in my toes. Even now, I only feel 90 per cent. The funny thing was, even with that, I had a better technique than some players in my team.

That was the right time for me to retire, and begin my career as a coach. It’s something I knew I wanted to do even from a young age. I remember telling my mum, when I was around 14 years old, that after I finished playing football, I wanted to be a coach.

Why? Because I want to see, is it too difficult or not? Always, my coaches would say: “If you were a manager, you would see how hard it is.”

As a player, I am on the pitch, so I can do something about the result. As a coach, you can only bring the best team on the pitch. You can prepare them for the game and give them everything they need to know about the other team. After that, you are on the outside. You have to cross your fingers that everything is working.

As a player, you’re only thinking for yourself. As a coach, you have to think about so many things. About the team; about the team around the team; so many different things.

After my first season as a coach at Stuttgart, I remember I was even more tired than I had been as a player. Maybe in this case, my coaches were right. It is hard.

But the mentality I learnt from the age of 10 is still strong. It’s a process. One that never ends.