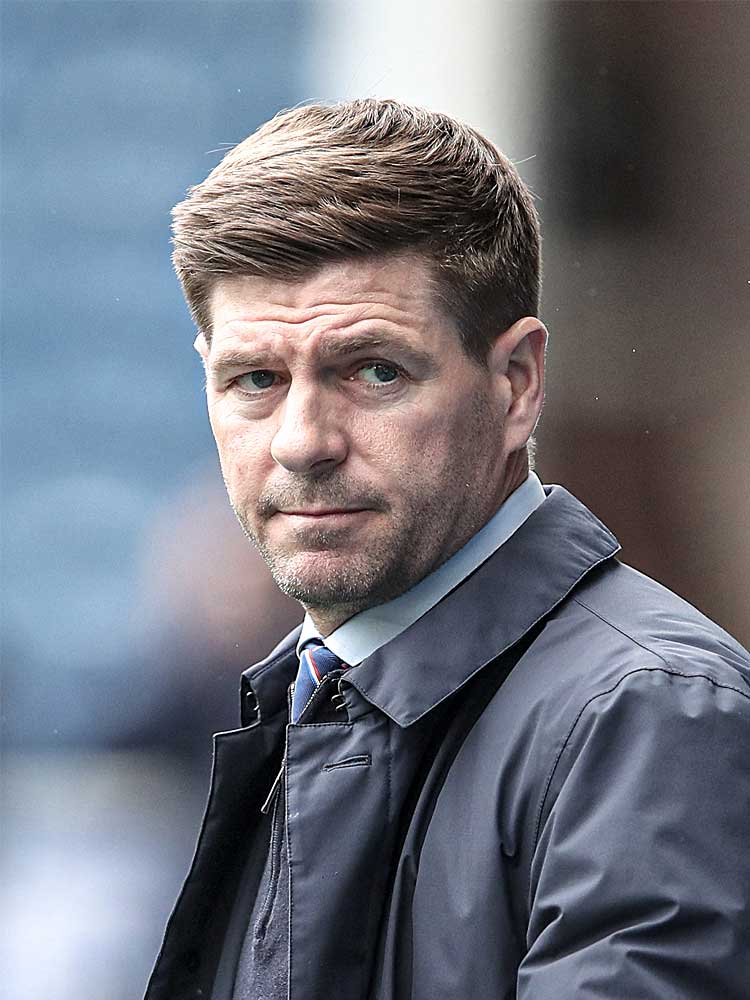 Profile
Steven Gerrard accepted a particularly high-pressured position for his first as a manager when in 2018 he agreed terms with Rangers to succeed the sacked Pedro Caixinha on a permanent basis. Such is the regard with which he is rightly held at Liverpool, he had already been considered a potential successor to Jürgen Klopp, whenever the time comes for the German to leave Anfield.

It was under Gérard Houllier that Gerrard made his senior debut, and in Houllier, Rafa Benítez, Roy Hodgson, Kenny Dalglish and Brendan Rodgers he worked with several highly-respected managers at Liverpool while being selected for England by Kevin Keegan, Sven-Göran Eriksson, Steve McClaren, Fabio Capello and Hodgson. He also became captain for club and country, leading England at two World Cups and a European Championship, but will be as aware as any that success as a player – even one as proven as Gerrard – is no guarantee of success as a manager.

Rangers had for so long trailed Celtic as Scottish football's leading power that he could not have been expected to help Rangers usurp their rivals in his first season in charge, but he did lead them to second place – their best finish since 2012. More recently, Rangers broke a Scottish record that had stood since 1906 by keeping seven clean sheets from their first seven league games of 2020/21 in the process of winning the title and finishing the league season without defeat. "I started explaining about the tactics I’d use at Liverpool," Benítez once said of his former captain. "It was my first conversation with Steven and it was all about tactics. Stevie was keen. It was at the beginning for us, when he didn’t need to do it."

Playing style
Throughout his time in management Gerrard has alternated between using a 4-3-3 or a 4-2-3-1 – a single or double pivot at the base of midfield – and consistently demanded an attacking, possession-based style of football. His wide forwards are those who are technically gifted and capable of carrying possession forwards, and are encouraged to attack through the inside channels to invite the full-backs behind them to overlap.

As his approach has evolved and the players at his disposal change, he has increasingly used an additional striker – most commonly Kemar Roofe – instead of one of a typical wide forward so that his team can attack with the additional presence that that figure provides. If increased space is created in the wide areas of the pitch for their full-backs to advance into, their attacking central midfielders attack between that full-back and wide forward, and often into the spaces in behind created by those wide players' movements.

By selecting those with an eye for goal as his wide forwards – those inclined to move infield at an earlier point in an attack – Gerrard has also reduced the risk of those central midfielders' route forward being blocked. Rangers are particularly effective in applying those movements towards the right (below), where James Tavernier attacks from full-back and delivers accurate final balls.

On the occasions a double pivot is being employed, Rangers' central midfielders play with greater caution, and instead of making those forward runs prioritise offering cover behind their full-backs, who instead simultaneously advance. If possession is being progressed towards the left (below), Tavernier regularly attacks into the penalty area at the far post.

Their left-sided forwards regularly operate from deeper territory, despite similarly combining and creating through the inside channel, and support the central spaces around the increased attacking runs from those in central midfield. The right-footed Ryan Kent is therefore regularly favoured there; it is when only one central midfielder attacks there that Kent moves into a more advanced position. Committing numbers forward and attacking around opposing defensive blocks ultimately represent two consistent and prominent features of the nature of attack Gerrard demands; to that end, Rangers also regularly deliver crosses into the penalty area.

If possession is being built from their defensive third, either starting with their goalkeeper or a reset pass from midfield, their two central defenders become influential. They either seek to play into the central midfielders in front of them or to build around their opponents and into the full-backs advancing outside of them. Conor Goldson, their senior right-sided central defender, favours playing direct passes beyond midfield, and to a degree because the rotations that unfold towards the right draw an additional opponent, inviting switches to towards the left.

Defending and pressing
Rangers have recorded an increasing number of regains in their attacking half since the conclusion of 2018/19. Those regains are most commonly made in wide areas after possession has been forced away from the central lanes, via a curved press. They also apply a similar approach to pressing high up the pitch as they do when using a mid-block. Their wingers prioritise the full-back opposite them while Rangers' starting striker – Alfredo Morelos more than any other – takes both opposing central defenders. With their full-backs taking their opposing wingers, Rangers' defensive line offers both cover behind a higher press and a numerical overload against front threes; even if encountering opponents organised to attack with a front four, Rangers' deepest-lying midfielder withdraws into a deeper position to maintain that overload.

If spaces between their full-backs and wide forwards initially exist, and are accessed by opponents, their attacking central midfielders move to cover those areas by sliding across from their central starting position, contributing to locking the ball wide – at which point secondary pressure is applied from the relevant full-back and wide forward and midfielder. Their full-backs are as prolific in making those regains, often having retreated from an attacking position, as those offering cover from a deeper position to delay attacks before engaging.

Similarly, that pressure applied from both ahead of and behind the ball carrier and that wider pressing trap  is also often applied during moments of transition, when possession is again forced or kept wide and pressed from in front, behind, and the relevant side, limiting the opposition's options when they are attempting to break. Doing so not only contributes to the extent to which Gerrard's team dominates both possession and territory, but encourages their most advanced players to remain in attacking positions by freeing them of the need to retreat into defence. Their preferred attacking structures exist for lengthier periods.

When required to defend from a deeper position, they are capable of being equally impressive. Should possession be lost in their defensive half or teams progress through their higher block, those further back withdraw into deeper, narrower territory no more than the width of the penalty area (above). The compact central midfield that exists in front of a similarly compact defensive line makes them particularly resilient, and often limits opponents to shooting from range.