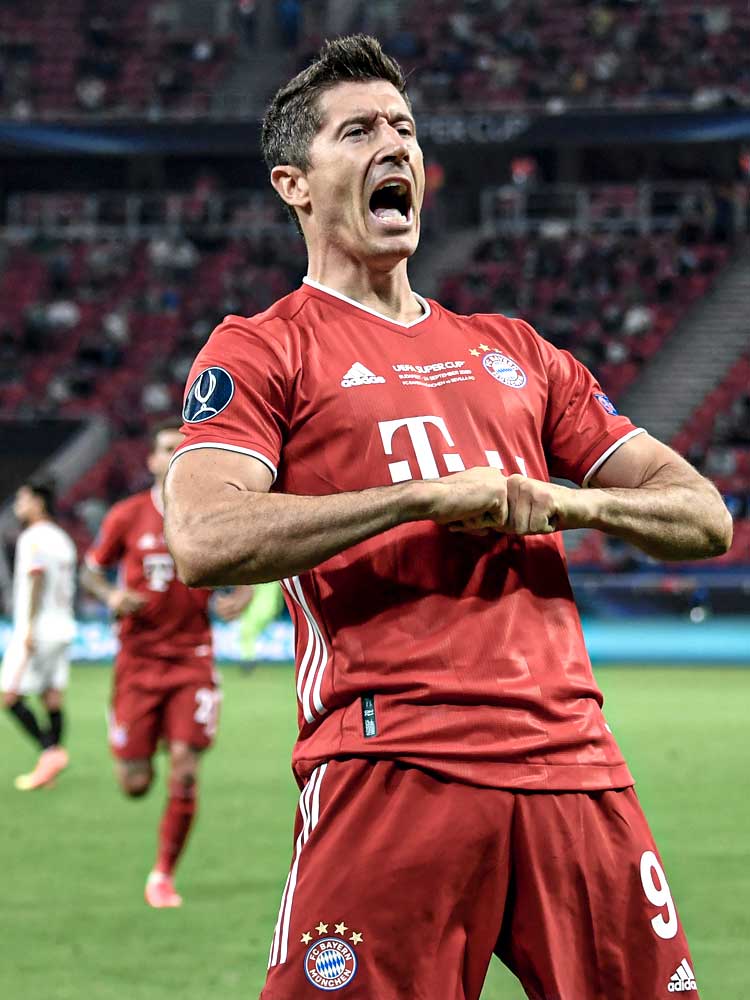 Profile
By beating the usual winners of football’s individual awards, Lionel Messi and Cristiano Ronaldo, to the 2020 edition of The Best FIFA Men’s Player, Robert Lewandowski was given recognition for a truly outstanding year. The winner, in December 2020, by a clear margin in a vote of media representatives and national team coaches and captains, Lewandowski was rewarded, aged 32, for his record of 47 goals in 44 games for club and country, making him the top goalscorer across the calendar year for any European top-flight club. In an era dominated by Messi and Ronaldo, the award represents deserved acclaim for Lewandowski, who has been the leading scorer for his team – first Borussia Dortmund and then Bayern Munich – in every season between 2011 and 2021.

Bayern's then-head coach Hansi Flick is under no illusions about the striker’s value. “Lewy is, on one side, very important on the pitch,” Flick said. “But also, he is in the inner circle of the squad. He is a very important player whose point of view truly counts.”

Tactical analysis
Lewandowski is the perfect all-round striker. The volume of goals he scores is what sets him apart as truly elite, but it is by no means his only strength. He is creative, selfless (below), hard-working, and as happy coming deep for the ball as he is running in behind and shooting at goal. The fact he has been so effective under so many different coaches with such different playing styles – from Jürgen Klopp’s gegenpressing at Dortmund to Pep Guardiola’s relentless possession – speaks volumes about the breadth of his talents.

He is, nonetheless, primarily a goalscorer, and he scores so many as much through the quantity of chances – thanks to his movement and understanding with his teammates – as the quality of his finishing. Season on season, he consistently ranks among the players to take the most shots in Europe and, according to fbref.com’s expected goals (xG) data, he scores roughly the number of goals the chances he has should produce. That is, he forges lots of good-quality chances and scores lots of goals rather than scoring lots of goals from half-chances. That is not to say he isn’t capable of scoring difficult chances, too, however.

The challenge for opponents facing Lewandowski is that he is adept just about wherever he goes, so defenders often follow him out of position into deeper territory to stop him finding space to shoot or create further from goal. He is brilliant at finding space, even against the deep-set defences that Bayern typically encounter. He times his movement in the area well, preferring to take a step away from his direct opponent at a moment when the defender’s eyes are drawn towards the ball – often when it first travels wide – creating enough of a gap between him and his opponent for him to attack the ball when it comes into the penalty area and to catch his defender off-guard. He adapts well once the ball is delivered, and adjusts his body to ensure he can shoot, though doing so leads to some unorthodox attempts on goal.

He is hugely effective in the air, having scored a remarkable number of goals with his head. He is adept at making a run between defenders to reach the end of a cross for a free header (below) but has even more success in holding off opponents and then outjumping them with his significant leap. He also reacts well to rebounds – both from his own shots and those of teammates – taking advantage of any defensive hesitation to follow the ball in and convert from close range. Lewandowski is willing to drop to receive in deep positions and hold play up for others to join an attack. Given that ability, his intelligent movement, and the fact he scores goals of all types, it is difficult to find any real weaknesses.

Role for Bayern Munich
It might seem incongruous that a player with his frame, strength and aerial ability would also be a strong dribbler, able to carry the ball forwards at pace and an effective presser, but Lewandowski is capable of each. He led the line for one of the best counter-attacking and pressing teams in recent memory under Klopp at Dortmund – where he won the Bundesliga title in 2010/11 and 2011/12 – and he also leads Bayern’s press with energy and determination.

Under Flick, Bayern were bold with their press, often pushing up with such an aggressive high line that every one of their outfielders was inside the attacking half. Their aim was to make the space in which their opponents could attempt to play out as small as possible – sometimes as little as just a third of the pitch. As their centre-forward, Lewandowski tried to force play towards one side of the pitch and to prevent any switches of play by cutting off passing lanes between the centre-backs (below). He also had enough acceleration to pounce as soon as he saw a poor touch or a moment’s hesitation in an opponent, to try and win the ball back.

There was less focus on possession under Flick than there was under Guardiola, and offensive transitions and counter-attacks were even more important. Once the ball was regained – often through their attacking players forcing their opponents to play long – those same attackers burst into action with direct sprints towards goal.

Bayern possess devastating pace on the wings in Kingsley Coman, Leroy Sané, Serge Gnabry and Douglas Costa, and it was usually those players, rather than Lewandowski, who immediately looked to run in behind. Lewandowski instead favoured withdrawing towards the ball to help with build-up play and create space for others (below). He then tried to join the second wave of attack by making a run into the penalty area and trying to reach the end of a cross.

Given Bayern’s dominance of the Bundesliga, they and Lewandowski regularly encounter low-block defences that have the primary aim of shutting them out, so lightning-quick transitions when there are gaps to exploit are key to their success. Lewandowski has also built an effective partnership with Thomas Müller, who played in the number 10 position in Flick’s preferred 4-2-3-1. They make co-ordinated movements in contrasting directions to create gaps that their deeper midfielders such as Joshua Kimmich and Leon Goretzka can make penetrative passes through. With Lewandowski starting higher and dropping deeper as part of that rotation, he then made a later arrival into the area, making him more difficult for opposing defenders to track.

In spite of the breadth of talent in Bayern’s attack, their most reliable route to goal remains through their talisman’s scarcely believable ability to find space in a packed penalty area. That skill, as well as his understanding with his teammates, means the flow of Lewandowski’s goals, even as he moves comfortably into his 30s, is as reliable as ever.