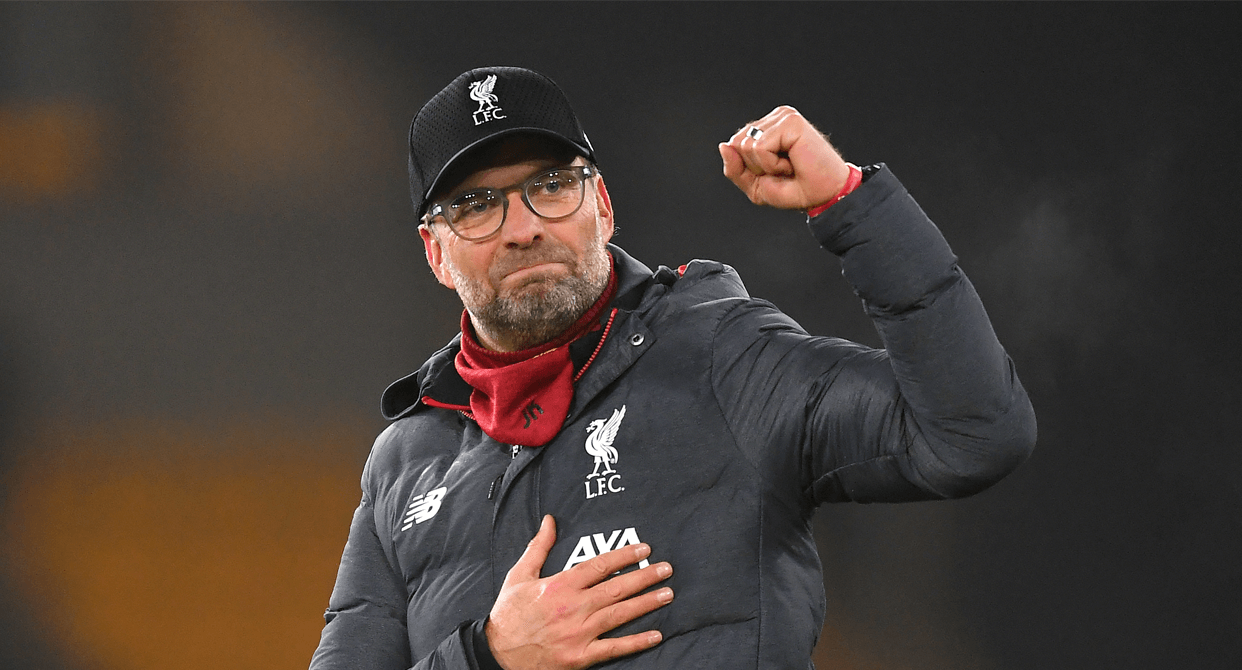 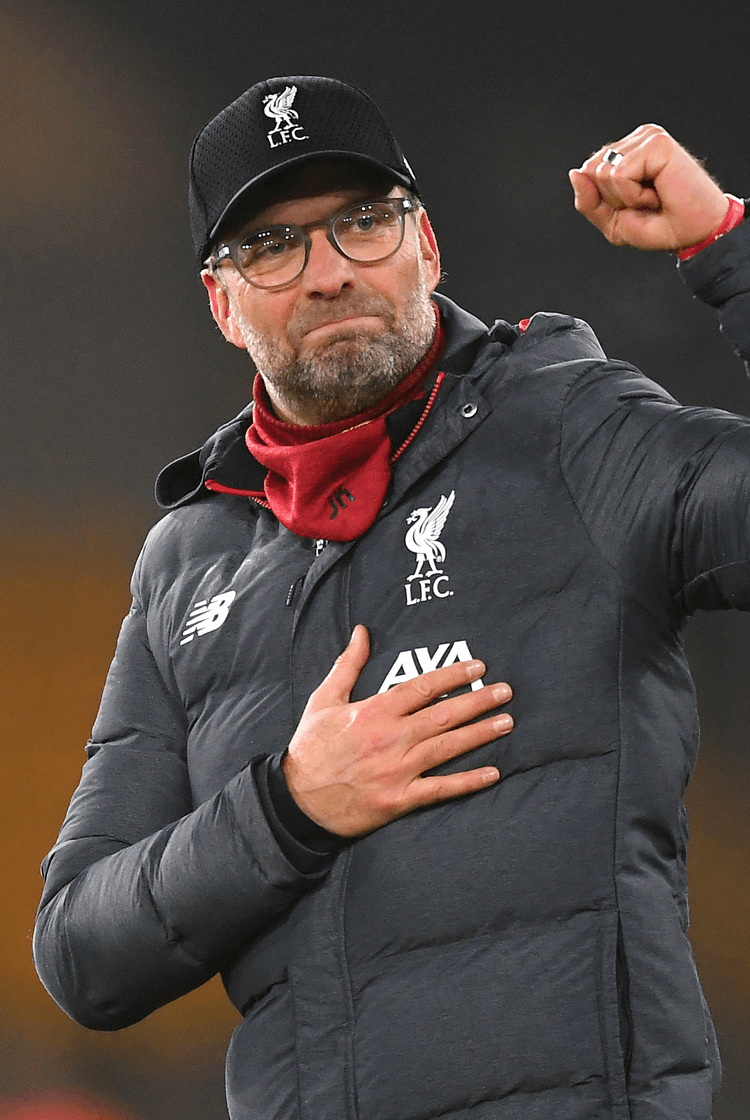 Profile
Jürgen Klopp is not only the last manager to deny Bayern Munich the Bundesliga title. He is also now the first manager to lead Liverpool to the Premier League – and he has done so by dethroning a Manchester City team widely considered one of the competition's greatest ever. Since succeeding Brendan Rodgers in 2015, Klopp has transformed the club, leading Liverpool to successive Champions League finals – they won the second – and, more significantly, to that long elusive league title.

His recruitment of Mo Salah, Andy Robertson, Virgil van Dijk and Alisson has been as influential as it has been impressive, and he has also nurtured the talent of Trent Alexander-Arnold and Joe Gomez, and reinvented Roberto Firmino and Jordan Henderson. "When Jürgen Klopp was appointed, I said that we should all strap ourselves in because it was going to be a rollercoaster ride," said Kenny Dalglish, the last manager to take Liverpool to the title. "Well, it certainly has been. He has revitalised this brilliant football club and has been a breath of fresh air. It’s the winning that counts."

Playing style
When Klopp first arrived at Anfield, Liverpool most consistently used a 4-2-3-1, built on a double pivot at the base of their midfield. They applied their manager’s favoured counter-press – their front four regularly led that counter-press, which was applied with increased aggression after losses of possession – and they therefore posed their greatest threat during transitions.

What has since been seen is a gradual evolution that transformed Liverpool not only into a team capable of winning the Champions League, but since then one certain to win its first ever Premier League title. The most significant change has surrounded the variety of their possessional play from their 4-3-3 since the start of 2018/19; they remain extraordinarily effecting during transitions, but they have become increasingly able to dominate possession.

The use of Robertson and Alexander-Arnold as advanced full-backs contributed to Sadio Mané and Salah operating in more central territory, where they combined with their similarly influential false nine, Firmino. In a similar vein to Lionel Messi at Barcelona, the Brazilian relished withdrawing into an unusually deep position (below) to create overloads within midfield and link play. Robertson and Alexander-Arnold attacked and are covered by the central midfielders, who also worked to support the central defenders during the first phases of their attempts to build possession.

Their sixth European Cup followed but the English league title continued to elude them, so Klopp demanded his team evolve once again. They have since built in an asymmetrical manner that involves the overlapping Robertson advancing further forwards than Alexander-Arnold, to encourage Robertson’s ability to play possession on the move, and Alexander-Arnold’s to cross from a deeper position and to deliver those crosses with such variety.

Mané has therefore moved permanently towards the left inside channel, and Salah rotates between a wider starting position intended to give him the freedom to cut inside on to his left foot and to shoot towards the far post, and a central attacker’s position when Firmino drops off. A further change can be seen in central midfield. The individual selected on the right of that three – most commonly Jordan Henderson – has increased freedom to advance to either overlap beyond Salah (below) or to support Firmino. The player on the left continues to prioritise covering Robertson, and forming a double pivot alongside the starting defensive midfielder – usually Fabinho – behind those pressing.

For all of his vision and flexibility, and the fact that so much of his reputation is built on his charisma and the gegenpress that has long been synonymous with his brand of football, the hallmark of Klopp's management is perhaps his ability to balance teams brimming with attacking qualities, as he has at both Borussia Dortmund and Liverpool. Every position is filled by a player capable of contributing in the final third.

Their goalkeeper Alisson’s accurate distribution is as likely to trigger a threatening counter-attack as it is to form the first penetrative part of their build-ups. Van Dijk offers a significant aerial threat at attacking set-pieces; fellow central defender Joe Gomez is capable of taking long, accurate throw-ins; in Robertson and Alexander-Arnold, Liverpool have perhaps the best pair of attacking full-backs in the world.

If operating as the single pivot in front of their defence, Fabinho or Henderson have the vision and ball-playing ability to play through Liverpool’s opponents to those offering runs further forwards. The two wider central midfielders consistently play with both energy and speed, and make runs that create spaces for those around them.

Defending and pressing
The German’s counter-press has always represented an attacking tool intended to enhance his teams’ potency, instead of merely strengthening their defence or grasp of possession. Dortmund were defensively sound when forming a lower block that invited opponents forward and, from deeper territory than is often seen with Liverpool, they relished countering into the spaces that doing so created.

That counter-press was focused on regaining possession in advanced positions, as an opponent had started to expand out of its defensive shape, and therefore at a time when that opponent had become more vulnerable and new spaces existed. While prioritising boxing the ball-carrier in (above), Klopp’s teams offer a different pressing dynamic that involves swarming and intimidating through the numbers and energy they engage with, and which can often overwhelm attempts to support the ball-carrier.

More common approaches involve focusing on interceptions and setting calculated traps, or pressing with aggression and a desire to directly duel with an individual, but Klopp’s tactics have largely remained consistent, even if at Liverpool he has introduced an additional attacking element around that counter-press. They have become particularly successful at securing regains after a direct forward pass has been followed by the opposition winning the first contact, something that has proved influential against opponents remaining in a low block, and those who excel when building possession under pressure.

As a defensive strategy Klopp has also encouraged a higher press (above) – beyond their counter-pressing approach – that relies on them maintaining pressure against opponents favouring shorter build-up play. For all that his squad features players capable of applying a stable lower block, their high press has become more common, and more successful.

Liverpool’s wide attackers press inside towards their opposing central defenders and, if needed, goalkeeper; their central attacker withdraws to prioritise the opposing defensive midfielder to deny combinations around those wide attackers. Behind them, those in central midfield support and then man-mark, and their full-backs remain ready to advance to those opposite them. As was also seen at Dortmund, they ultimately often succeed in restricting their opponents’ possession to the wide areas.

In the same way their recruitment has increased their attacking potential, it has also given them an impressively strong defence. Those in midfield offer the same energy in the defensive half as they do when attacking; Alisson is convincing when required to come out of his goal; Van Dijk is so authoritative when competing for aerial duels that he has become indispensable in central defence.