Profile
Jadon Sancho’s emergence as a forward of potentially the highest calibre has essentially vindicated the significant and unorthodox gamble he took with his career when, at 17, he left Manchester City and Pep Guardiola to join Borussia Dortmund in the Bundesliga. In the years since, he has become a regular England international and is consistently excelling in Dortmund’s pursuit of the German title and in the Champions League.

“There was a stat around Champions League appearances for nationalities and how it’s correlated to success at senior international level,” said Gareth Southgate, England’s head coach, when Sancho was first called up. “So to have a player starting in the Champions League is important to us. His decision to move tells you something about his character. He has tremendous belief in himself.” By securing his first two international goals in the victory over Kosovo, Sancho became the first player born since the turn of the century to score for England. He also became the youngest to score more than once for them in one match since Wayne Rooney against Croatia in June 2004.

Tactical analysis
Sancho is a particularly talented dribbler; he is capable of exploding away from a standing start and swiftly reaching top speed. That he uses small, regular touches when doing so also encourages changes of direction (below), or for him to completely stop and then adapt in the event of a potential underload or amid pressure from multiple angles. When advancing he uses simple, effective drops of his shoulders to put opponents off balance and, from there, his fine control and balance takes advantage of that – particularly in one-on-one situations.

That desire to take multiple touches, even when sprinting, can sometimes undermine his progress; if an opposing defender can match him for pace, those touches can inhibit his ability to beat them. Few are capable of remaining with him over greater distances, but if carrying possession inside at an angle those touches not only help a defender follow him, but also invite them to steal possession or stall his progress. 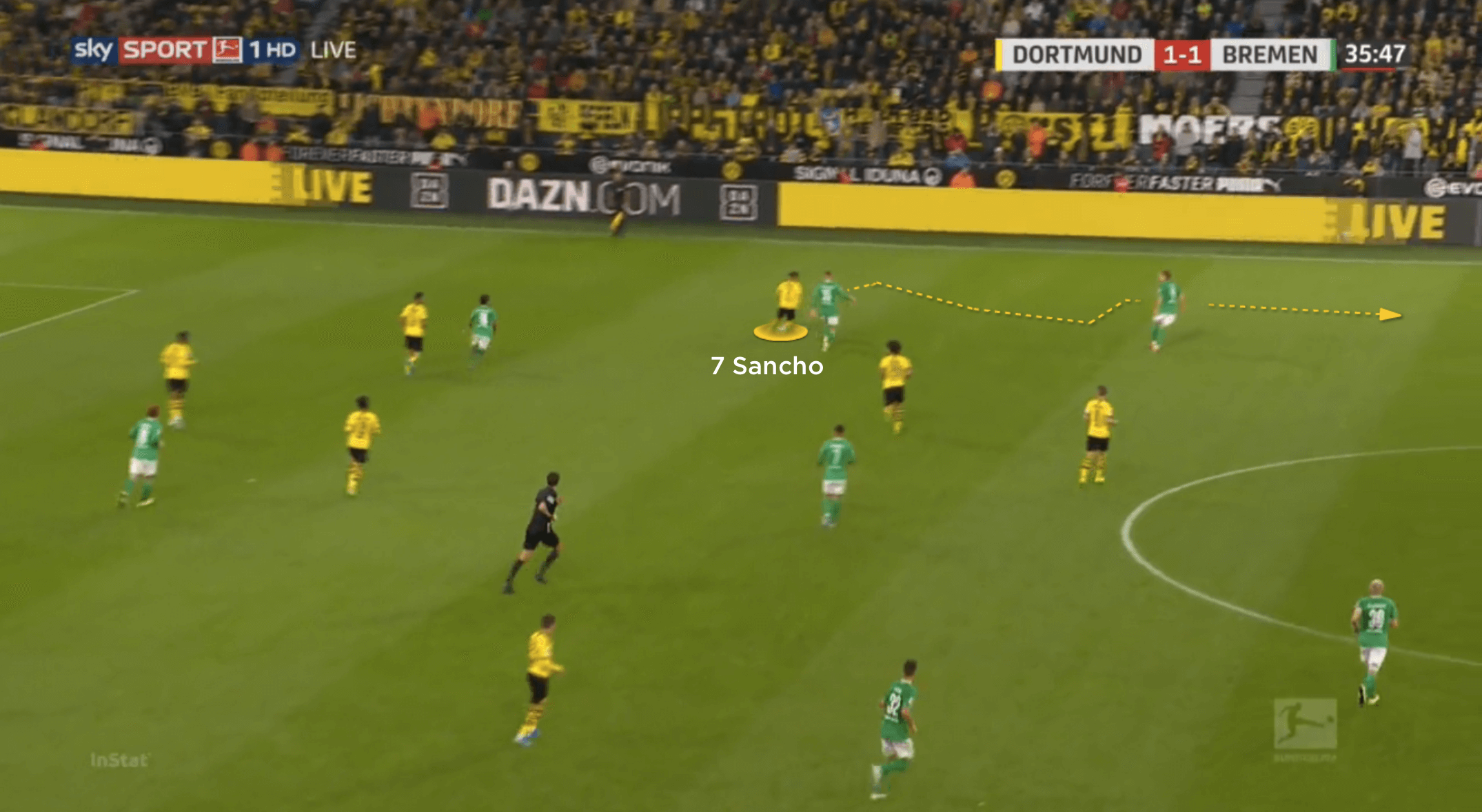 If his technique when receiving possession isn’t necessarily orthodox, there is a touch of the street footballer about him. He often receives with his back to goal – even when wide – which becomes a trigger for an opponent’s press, but because of his acceleration and speed he can capitalise on that with lateral touches around an opponent before exposing the space behind them created by that press (below).

His improving combinations and decision-making – particularly regarding when to release possession – are becoming a further asset. Previously, he would continue to carry possession into crowded areas of the pitch, with only mixed success. He has since learned that he can continue to drive forward and then combine with his fellow attackers before penetrating off the ball, when he will often go untracked, and therefore move into a more threatening area in which to receive. 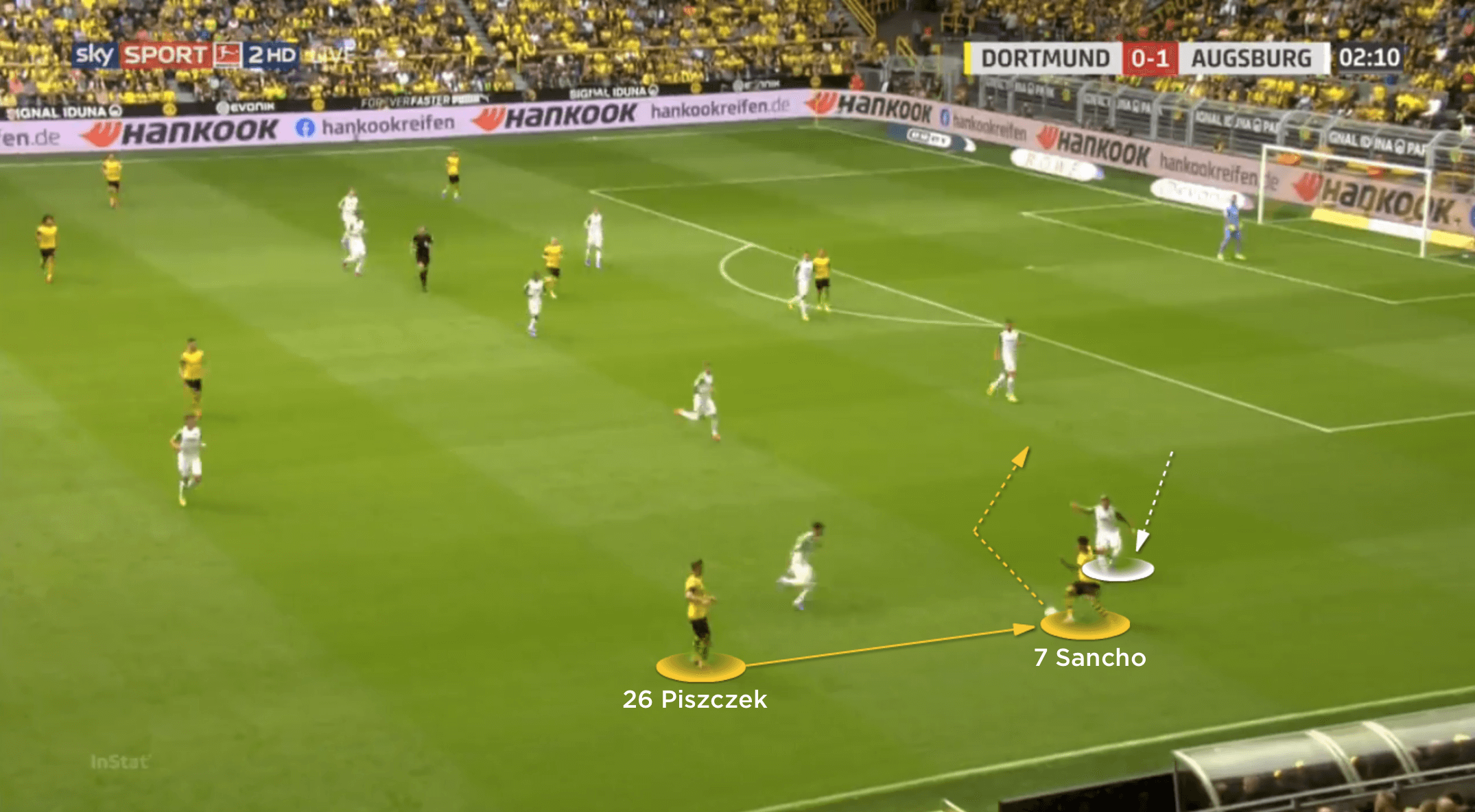 Role at Borussia Dortmund
Sancho has largely been used as a right-sided forward during his time in the Bundesliga but, as with England, there have also been occasions when he has been used from the left. Their head coach Lucien Favre largely favours a 4-2-3-1 formation; it was in that formation that Sancho impressed throughout 2018/19.

With Marco Reus playing as Dortmund’s number 10, usually in support of a lone striker, Sancho typically remains on the right, from where his combination play with such a fine number 10 and creation of patterns with their striker are also improving (below). His impressive balance in tight spaces means that Dortmund can continue to attack through a narrower block, and with further combinations available. Thorgan Hazard is one who plays similarly to Sancho but, when used wide, Julian Brandt drifts infield and offers a further option. 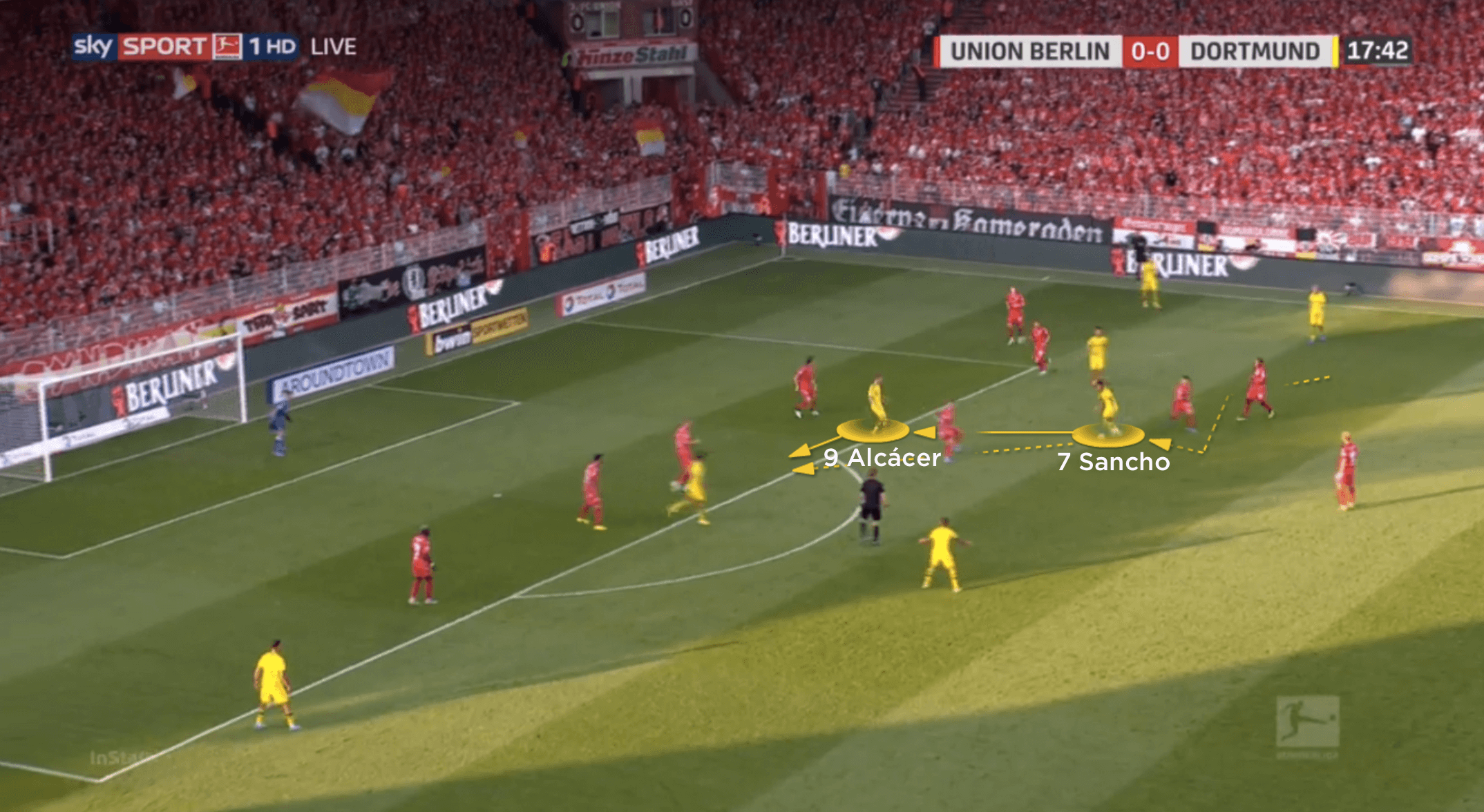 Numbers in central areas mean increased targets for Sancho to cross to. Brandt’s runs inside therefore create a cutback option – often in support of Reus – and encourage a striker’s predatory movements with driven balls across or in front of goal (below).

Complementing those many attacking options against more defensive opponents, Dortmund remain effective when attacking on the counter. 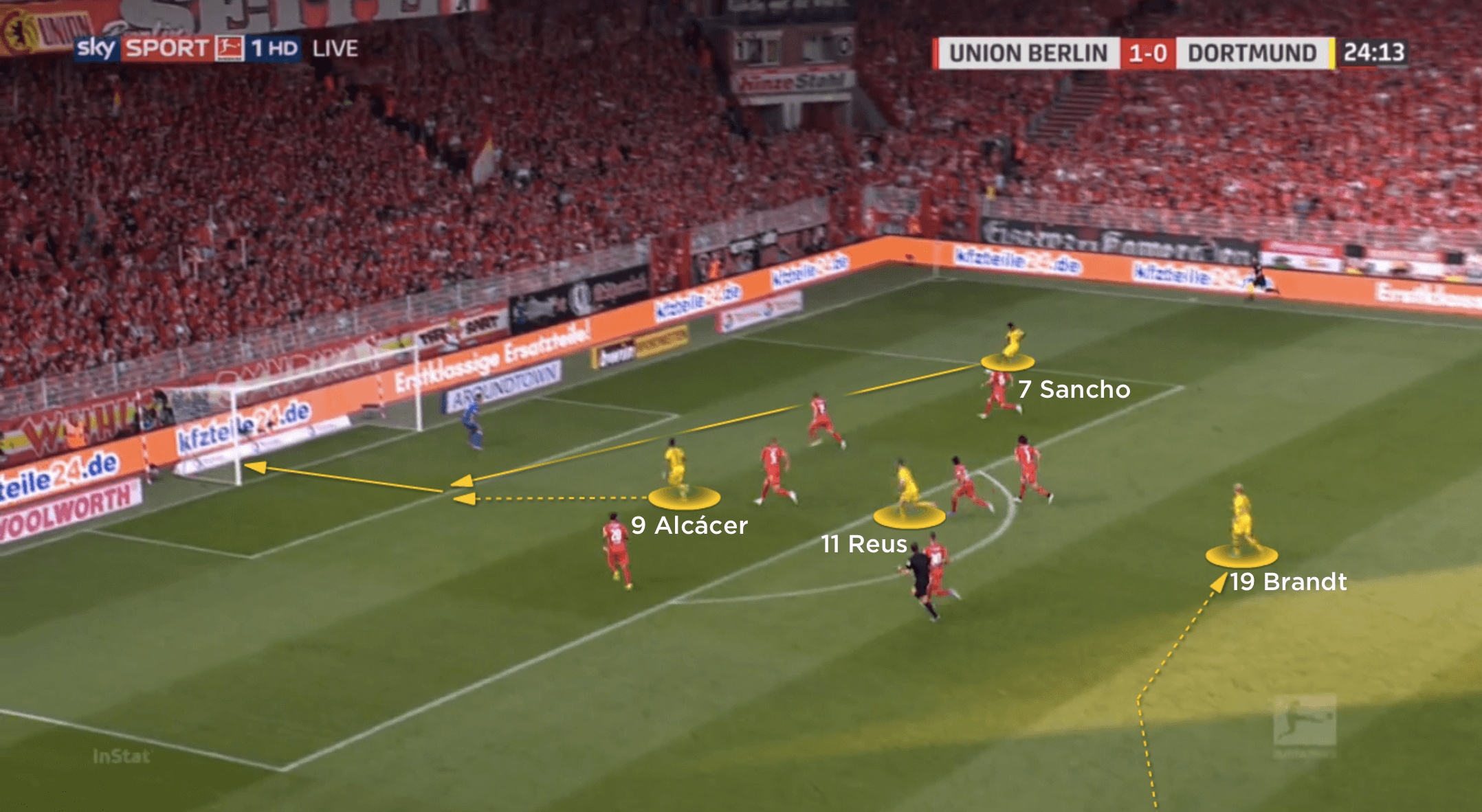 They seek to transition into attack through wider areas, where Sancho and Hazard carry possession, and support those ball-carriers with advancing full-backs ready to overlap or drive inside. Their full-backs can essentially free Sancho of such intense attention, encouraging him to continue playing at a high tempo into an increasing space, or to even finish attacks on goal.

That Favre also uses a double pivot at the base of midfield, and can thus cover the advances of those full-backs, means Dortmund are also prepared for transitions into defence. The quick regains they can lead to also encourage Sancho, who can quickly receive in more advanced, effective positions.

Christian Pulisic’s arrival at Chelsea put him among those being asked to replace the departed Eden Hazard. We assess what he brings to the Premier League 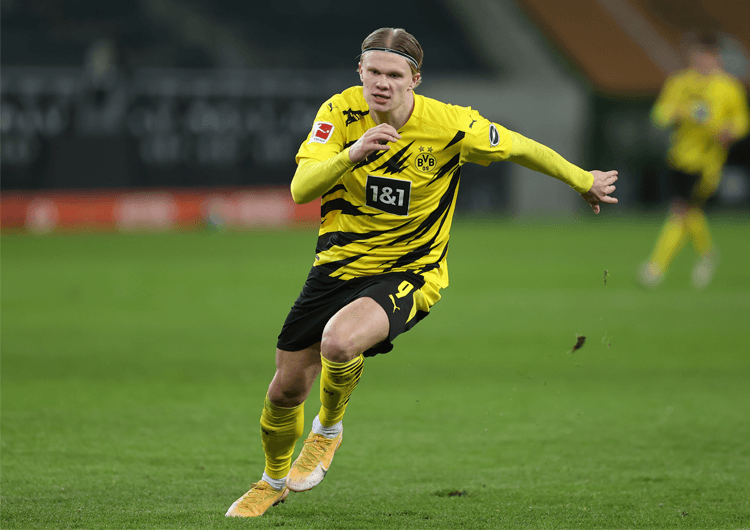 What makes Borussia Dortmund wonderkid Erling Haaland, who reached 20 Champions League goals in only 14 games, so prolific? We examine the striker

Manchester United’s Marcus Rashford is contributing to an attack that potentially rivals any in Europe. We analyse him in what finally looks a permanent position