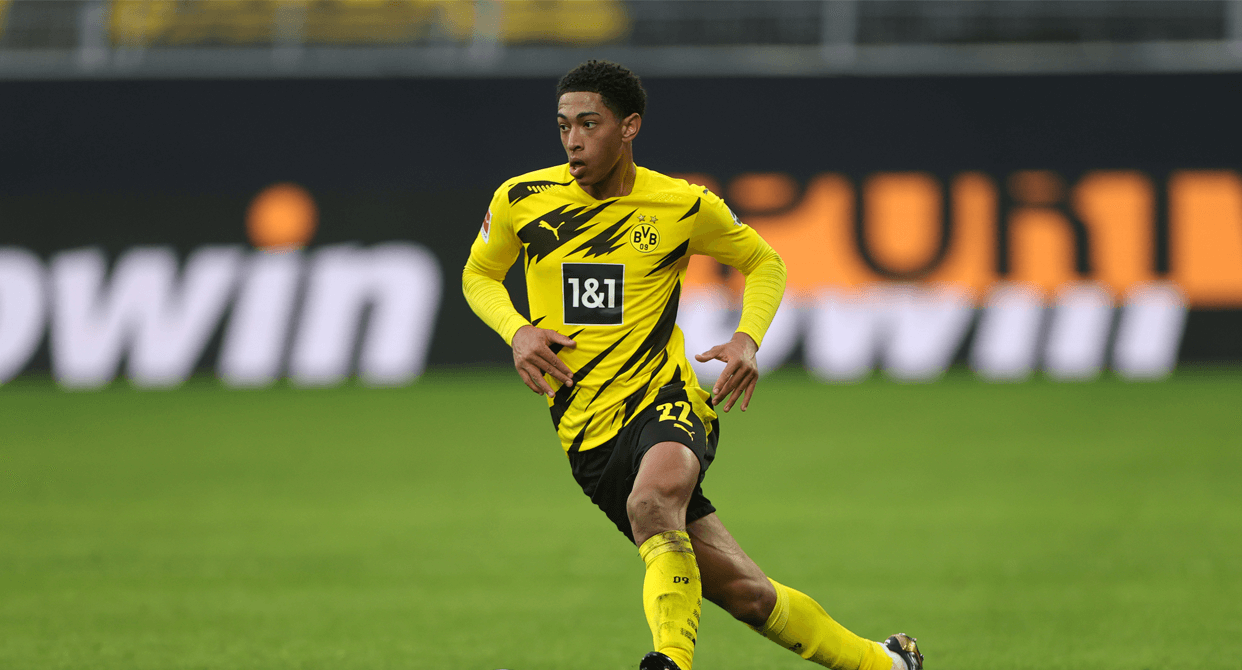 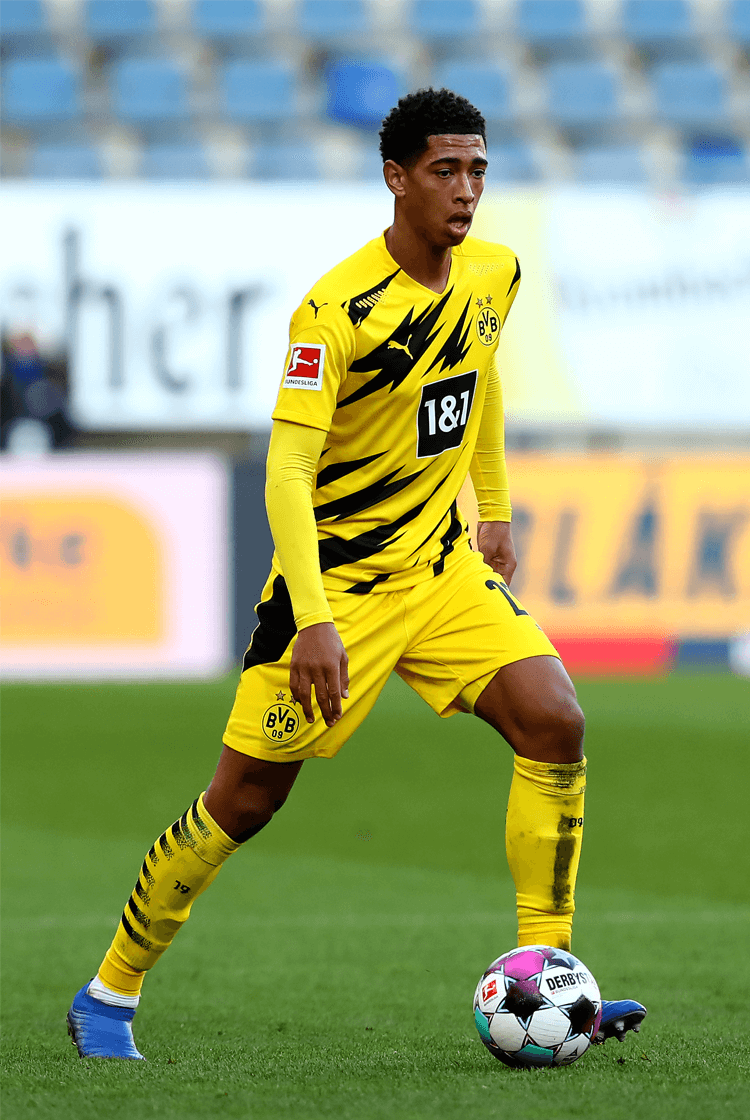 Profile
Having become Birmingham’s youngest-ever player aged just 16 years and 38 days, Jude Bellingham quickly showed he was too talented to be playing in the Championship, and attracted interest from many of the best teams across Europe. It was Borussia Dortmund who won the race to sign him for £22.75m in the summer of 2020, when their former manager Lucien Favre insisted that Bellingham’s age was no barrier to his chances of game time.

“First and foremost, I am interested in playing intelligence,” Favre said of the then-17-year-old. “With someone like Bellingham, I don't look at the date of birth. He has the technical skills and a feel for space. I like the way he handles the ball, how he defends it. Jude gives us many tactical possibilities and has an amazing presence. He can play as a number six or number eight, is a good passer, tries to put himself in a finishing position. With him, different systems are possible.”

Tactical analysis
As Favre highlighted, Bellingham is suited to playing in several different midfield positions. He is versatile and unpredictable and, wherever he plays, likes to drift from his starting position – from central midfield to wide to combine with a wide midfielder or full-back, or from wide into a position between the lines. He is comfortable in crowded central areas, boasts quick feet, and does his most impressive work playing short, sharp passes to emerge from tight situations. He also has a very small turning circle and can drop a shoulder before darting in the opposite direction to lose a marker.

He has the ability to commit opponents to a challenge before swiftly flicking a pass to a teammate (below), making him suited to playing in attacking midfield, where he is useful in helping his team find a way through a low-block defence. He is also at his best playing short passes and thrives under pressure from opponents, always looking to receive, and he is bold in possession. His composure and self-belief will have been a significant part of the reason Dortmund decided to spend big on a teenager who was then relatively untested.

As might be expected from such an inexperienced player, overconfidence can sometimes mean he makes the wrong decision. His faith in his own dribbling abilities means he sometimes chooses to dribble when he would be better served playing a simple pass.

He is also far less effective when he attempts long passes, and all too often at Birmingham would attempt to play the killer pass too early when recycling possession would have been preferable. It appears he has started to write that out of his game at Dortmund, suggesting he is already maturing under their guidance and with better players around him. In a tougher league, Bellingham is realising the importance of retaining possession rather than trying to win matches on his own. His pass success rate of 74.9 per cent at Birmingham was simply too low for a central midfielder, and that has increased in Germany.

He works extremely hard, and isn’t reluctant to get stuck in, something that Favre highlighted, and will have contributed to the decision to field Bellingham in defensive midfield on occasion. He makes plenty of tackles, and though he has at times shown a little too much enthusiasm by diving in and getting beaten, he is improving in that regard, opting to stay on his feet more often. Both Favre and Bellingham’s manager at Birmingham, Pep Clotet, have said that Bellingham’s attitude and professionalism are attributes that help him stand out; Clotet described him as “very mature and very focused” when he was only 16.

Role at Borussia Dortmund
Many of Bellingham’s appearances for Birmingham came wide in a 4-4-2 formation, but he took a narrow position in midfield and did much of his work in central positions. When used as a substitute since his move to the Bundesliga, he has largely been played in an attacking or wide midfield position, with the freedom to come infield and break forward when he has the opportunity.

Given his age, it has been relatively surprising quite how often he has started for Dortmund early on in his time there. What’s more, the majority of his starts have come in central midfield, and involved playing a far more defensive-minded role than that in which he first established himself at Birmingham.

Frank Lampard-like late bursts into the area and the composed finishes seen at Birmingham are a rarer sight at Dortmund, where he provides less of a direct threat on goal. Instead, he has tended to play a mature, screening role in front of Dortmund's defence, breaking up play with tackles and interceptions, but impressing most with his intelligence and positioning. He holds his position to ensure his team keep their shape, staying close to his midfield partner so that the opposition cannot split them and progress centrally (above). He is showing how tactically astute he is for his age, and Dortmund are showing real trust in Bellingham, happy to play a young player in a central midfield two in a range of formations.

Bellingham’s defensive contributions are a significant reason that they have done so, but the teenager’s ability in possession is the main factor. He moves around the pitch, constantly offering a passing option to his teammates. He is also happy picking the ball up from a defender in front of their defence or moving into a false full-back position – usually on the right – to encourage the full-back to push forward and the wide forward, usually Jadon Sancho, to move infield.

He moves the ball around quickly and efficiently, helping his team shift the opposition around in an attempt to create gaps in their shape. When he has the chance, he plays forwards whenever possible, and has the confidence to play risky passes that break lines. Dortmund’s wide attackers often come infield to play like two number 10s, rather than hugging the touchline like wingers, in the hope of receiving a pass between the lines. Bellingham is capable of spotting opportunities to find them, and is daring enough in possession to do so (above).

Bellingham is a hugely exciting and talented prospect, so it will be fascinating to see how he develops playing regularly for one of Germany's top teams. Where his future lies on the pitch remains to be seen, and he has shown in his early career at both Birmingham and Dortmund that he could feasibly be moulded into whatever they want him to be. If it appears he could be a deep-lying midfielder, there is every chance he will end up further forwards.