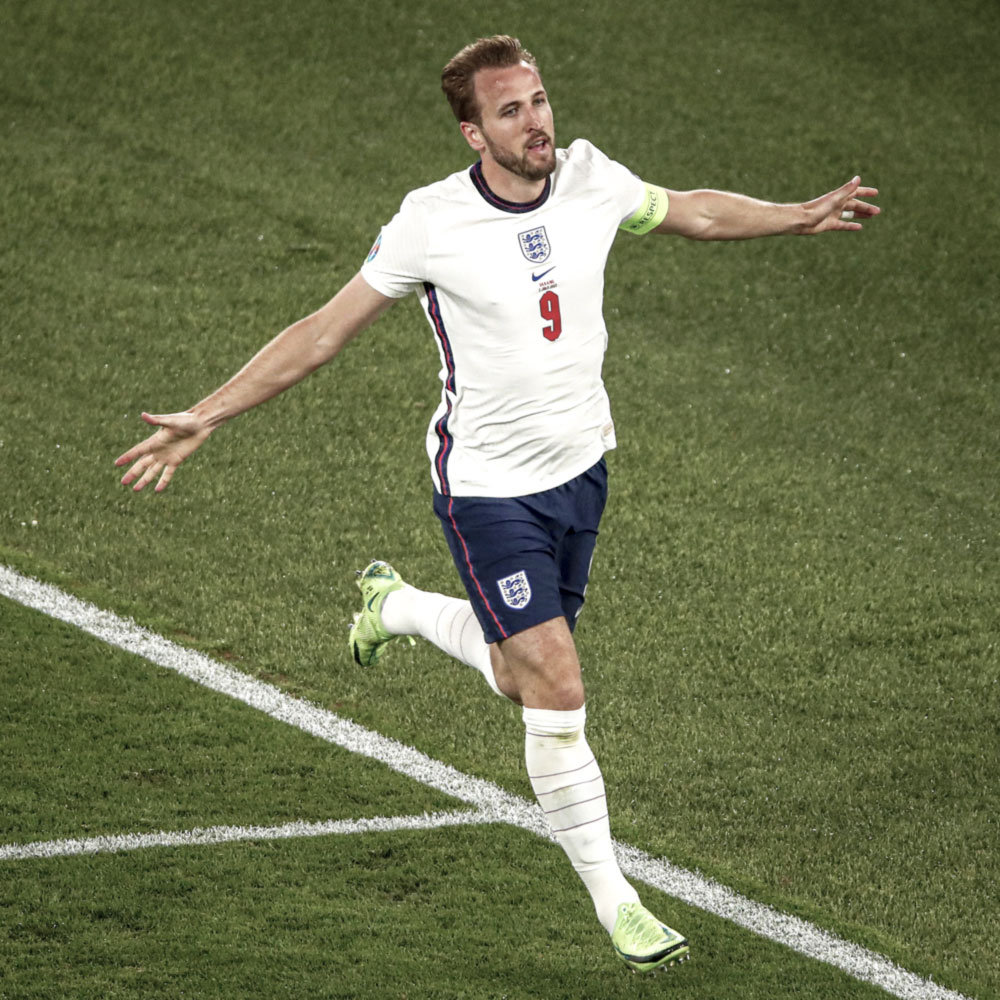 England reached the semi finals of the European Championship for the first time since 1996 with a dominant defeat of Ukraine in Rome. Fresh from his first goal of the tournament against Germany in the last 16, captain Harry Kane opened the scoring after only four minutes, latching on to a Raheem Sterling pass to lift the ball past Heorhiy Bushchan. Gareth Southgate's men rarely looked anything other than in total control, and put the tie to bed within five minutes of the restart – Harry Maguire rising highest to head home a Luke Shaw free-kick before the left-back registered his third assist in two games for Kane's second. Jordan Henderson headed home his first England goal in 62 international appearances, as England coasted home and into a Wembley semi final against Denmark. "The players have been fantastic," said Southgate. "To play as well as they did in a game with so much resting on it was impressive. We've known we had players we needed to look after physically. We know across seven games, the squad is so important, trying to give people a breather at the right time."

Head coach Andriy Shevchenko set his Ukraine team up in a 3-5-2 formation in possession, with Illia Zabarnyi, Serhiy Kryvtsov and Mykola Matviyenko forming the back three. Oleksandr Karavayev, Mykola Shaparenko, Serhiy Sydorchuk, Oleksandr Zinchenko and Vitaliy Mykolenko operated across the midfield, while Andriy Yarmolenko and Roman Yaremchuk were paired in attack. England defended in the same 4-2-3-1 formation in which they set up on the ball, and shifted between a moderately high press and a mid-block throughout the match.

England’s pressing shape took on two forms. The first was for Harry Kane to close down Kryvtsov – the central of Ukraine’s back three – and show him outside while wide attackers Jadon Sancho and Raheem Sterling were positioned in the half-spaces to screen passes into the feet of Shaparenko and Zinchenko. Kalvin Phillips and Declan Rice would be positioned in front of the back four, but would also ensure they had close access to Shaparenko and Zinchenko in case the cover shadow provided by Sancho and Sterling was breached. Mason Mount looked to occupy Sydorchuk, while the full-backs would move out to press the Ukraine wing-backs if required.

The other approach that England used was to keep Kane and Mount deeper, occupying Sydorchuk and Shaparenko while Phillips picked up Zinchenko. England would allow Viktor Tsyhankov, who replaced the injured Kryvtsov on 35 minutes, to have possession, but would then use Sancho and Sterling to press the outside shoulder of the outside centre-backs, forcing them inside and screening the wing-backs in the process.

England’s defensive approach was intelligent and actually led to Ukraine managing 48 per cent of possession – a surprisingly high ratio for a team that was 4-0 down with 27 minutes remaining. England were aware that Ukraine lacked the quality to break down their defensive structure without taking some risks; they were able to lie in wait and pounce on the inevitable mistakes, before launching counter-attacks with their key attacking players – as was evident in the moments leading to England’s third goal of the game.

Ukraine’s possession largely came in circulation between the back three. Shevchenko’s side tried to play through midfield, but often ended up returning the ball to the defensive line. They looked to use their wing-backs to maintain width on both sides of the pitch and stretch the England defensive structure, while using their outside central midfielders to make penetrative runs in behind in the half-spaces, allowing their forwards to remain more central in order to attack any subsequent crosses.

England looked to protect the centre of the pitch, and used Rice and Phillips to track the runs of Shaparenko and Zinchenko if they looked to move in behind. Full-backs Kyle Walker and Luke Shaw would move out to close down the wing-backs, but if Ukraine were already in England’s half then the wide attackers would also defend in the wide areas.

The collective out-of-possession effort and organisation has ultimately been the reason why England have managed to reach the semi finals without conceding a goal. It appeared that Ukraine could pose a threat only through an England mistake in a dangerous area, such as the underhit pass from Walker in the first half, or from a set-piece or counter-attack. They managed only two shots on target throughout the game: one from outside the box and one from that Walker error. England were comfortable out of possession; the straightforward nature of the victory allowed Southgate to make intelligent substitutions ahead of the semi final on Wednesday.

Gareth Southgate set his England team up in a 4-2-3-1 formation in possession. Kyle Walker, John Stones, Harry Maguire and Luke Shaw formed the back four, with Declan Rice and Kalvin Phillips ahead of them in midfield. Jadon Sancho, Mason Mount and Raheem Sterling supported Harry Kane in attack.

It became immediately apparent that England would have to break down a defensive 3-5-2 structure that had little interest in leaving their half of the pitch. Ukraine didn’t close down Maguire or Stones, and applied only very mild pressure to the full-backs. Andriy Yarmolenko and RomanYaremchuk tended to occupy Rice, to try to prevent England playing through midfield. When the ball went wide, Ukraine looked to block passing lines diagonally and horizontally inside; they were happy to allow the pass up the line, as it remained on the outside of their structure, but they pressed to force the pass back to the full-back.

As a result, England had to be patient in possession, and circulate across the back line as they searched for gaps within the Ukraine structure. The switch of play was always going to be important, particularly if it led to Sancho or Sterling receiving to feet and being able to run with the ball. This was evident after five minutes, with the switch to Sterling from which he played a clever pass into Kane for the opening goal.

Another feature of England’s opening goal was the unselfish run from Shaw. Making these off-the-ball runs to drag opponents away will sometimes lead to the runner receiving possession and executing the next pass, as seen with Shaw’s run and cross for England’s third. Much of the time, however, these runs will be used to disrupt the compactness of the opposing structure and create gaps through which chances can be created. This off-the-ball movement has been a welcome improvement from the Scotland game in the group stages, in which England showed little promise in breaking down a deep unit.

England often looked to have six points of attack – the four attackers plus both full-backs, or one full-back and one advancing central midfielder. This either stretched the Ukraine structure and created gaps inside, or offered good width for England to use second-line passes to play around the opposition.

Another positive from England’s performance was two goals from set-pieces – their first of the tournament. The man-marking and zonal responsibilities were abysmal for England’s fourth – Jordan Henderson’s first international goal – but Maguire’s header from a wide free-kick for their second was a well-worked move. England set up with two players moving towards the ball to take the set-piece, meaning Ukraine’s defensive line couldn’t be sure whether to expect an outswinger or an inswinger. This affected the timing of when they would drop – with Zinchenko dropping earlier than the rest of the unit, Maguire was able to remain onside and get first contact ahead of his direct marker.

After the fourth goal effectively ended the game as a contest, the tempo dropped. There was little reason for England to take any unnecessary risks, as Southgate’s side simply saw the game out to conserve as much energy as possible ahead of a first Euros semi final since 1996.