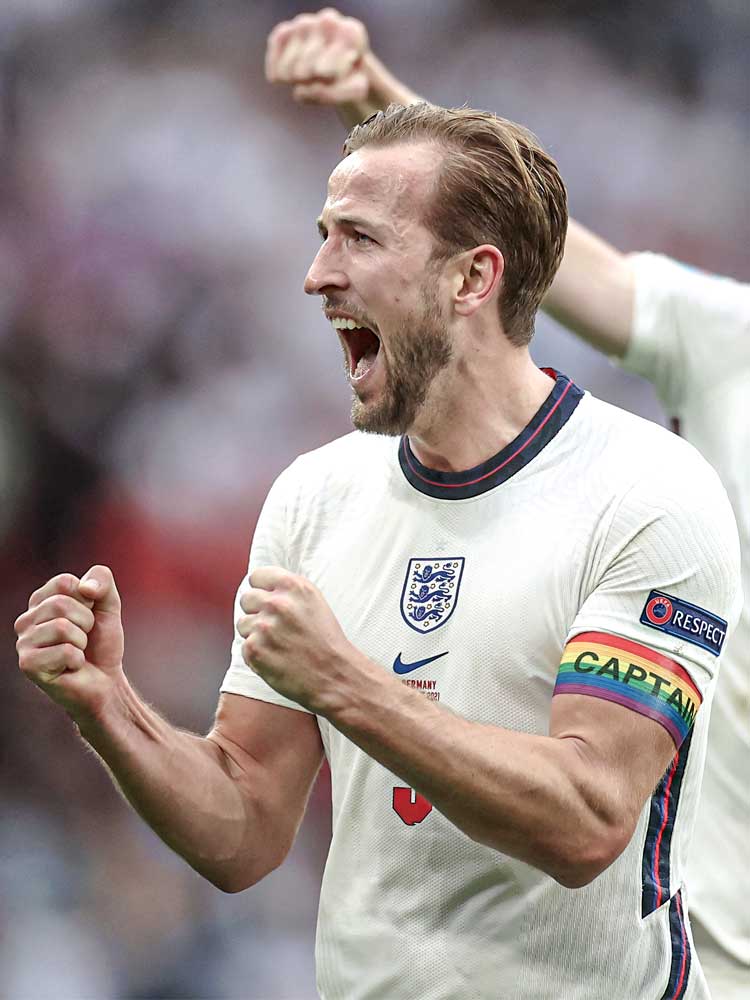 England recorded their first victory over Germany in the knockout stages of a major competition for 55 years to advance to the quarter finals of Euro 2020. Just 523 yards from where he grew up and in response to the criticism he is consistently subjected to, Raheem Sterling scored his third goal of the tournament to once again give his team the lead, before Harry Kane, also criticised for his appearances throughout the group stage, scored his first. The greatest story of redemption regardless surrounds England's manager, Gareth Southgate. It was his penalty miss against the same opposition and also at Wembley Stadium, at Euro '96, that started the run of penalty shootout defeats that only ended at Russia 2018 with him as manager. Twenty-five years later, victory over Germany at the European Championship followed, ensuring one of the greatest highs England have experienced since that heartbreaking defeat.  "For the teammates that played with me, I can't change that (Euro '96),” Southgate said. "That is always going to hurt. But what is lovely is that we've given people another day to remember and now we've got to go and do it in Rome." Defeat brought to an end, after 15 years, Joachim Löw's successful reign as Germany manager. Löw is to be replaced by Hansi Flick, and he said: "You don't move past a tournament like this in just a couple of days, so it will take time. Then you'll have the energy for new challenges. I've never said that I’ll retire."

England were organised by their manager Gareth Southgate into a 3-4-3 formation built on the back three of Kyle Walker, John Stones and Harry Maguire. Their opponents, Germany, defended with a 5-2-3.

The hosts attempted to build possession from the back, and while they did so in a 3-4-3 in an attempt to nullify Germany's attacking threat, their shape contributed to them also exposing some vulnerabilities. The left half-space offered particular potential, because of the positioning of Kai Havertz; after England moved the ball to the right, Havertz would withdraw back into midfield so that Leon Goretzka and Toni Kroos could shuffle across while remaining compact, but when they then played it to the left, Havertz would advance and attempt to press Maguire, leaving Goretzka and Kroos stretched, and presenting Raheem Sterling with space to receive, turn, and advance. Matthias Ginter was inconsistent over whether to follow Sterling or remain in central defence, but he mostly retained his position, at least until the influential Sterling had turned; it was access to the left half-space that was crucial in the build-up to England scoring their opening goal; Jack Grealish received there before returning the ball backwards and play then being switched.

During the first half England were guilty of using too many touches and therefore not releasing the ball at the correct moment, which meant them not capitalising on the potential to attack when it existed – particularly during moments of transition, when them doing so contributed to Germany recovering their defensive positions. They, regardless, attempted to build on Kyle Walker's positioning as their right-sided central defender; Declan Rice's presence as their defensive midfielder encouraged Walker to adopt a more advanced position; when the ball was on the left, Walker moved to outside of Germany's front three to provide the option of a switch of play that eliminated that front three when he drove forwards into space. That he is a natural full-back, instead of a central defender, made him more capable of doing so. That switch was also evident in the build-up to Sterling giving England the lead.

Rice and Kalvin Phillips both started with a lack of composure than contributed to them making errors in possession, and too often playing backwards and sideways, but they gradually improved. Phillips started to offer rotations with Walker that meant him covering as a false full-back when Walker advanced into midfield; the timing of them doing so was essential; Walker vacating his position early led to Thomas Müller drifting infield, so Phillips made a late, fast run into the space that then existed to receive from Maguire or Stones – and when Kroos was reluctant to follow him because of the space he risked vacating,

England's captain, Harry Kane, struggled to impose himself for large periods but attempted to withdraw into deeper territory and link possession, when possible, given Bukayo Saka, Sterling and Grealish made runs in behind. His movement when scoring England's second goal was, however, crucial; his diagonal run, when Luke Shaw had possession, drew Ginter infield, creating the passing lane to Grealish, who provided the assist.

Joachim Löw set Germany up into a 3-4-3 formation led by the front three of Kai Havertz, Thomas Müller and Timo Werner. Their hosts, England, defended with a 5-2-3 in which Kalvin Phillips and Declan Rice consistently remained in midfield.

The pressing structure of Gareth Southgate's team involved their front three pressing Germany's back three, their wing-backs taking their opposing wing-backs, Rice and Phillips taking Leon Goretzka and Toni Kroos, and their three central defenders prioritising Germany's front three. Germany's goalkeeper Manuel Neuer regularly sought to play forwards quickly, or to play aerial balls towards their wing-backs Joshua Kimmich and Robin Gosens; Havertz and Müller withdrew into midfield to occupy Phillips and Rice, in turn forcing England's forwards to take Goretzka and Kroos and free up Germany's back three, or to risk leaving Goretzka and Kroos with time and space.

The potential for Germany existed in either Harry Maguire or Kyle Walker advancing to take Müller and Havertz, and therefore risk leaving Werner one-on-one with John Stones. With Werner playing on the shoulder of England's defensive line as much as possible he posed a significant threat to the spaces in behind, but England adjusted to ease the pressure on their back three via Rice and Phillips taking Müller and Havertz and their front three prioritising Goretzka and Kroos. The closest of that front three closed down the ball carrier, and the other two retained central positions to restrict passes into midfield.

Germany, in turn, responded by Goretzka advancing to alongside Müller and Havertz to create a three-on-two. Doing so also meant a three-on-one existed against Kroos, and that England could press Germany's defensive line with two players instead of one, but Goretzka's advanced positioning contributed to Germany progressing possession; their greatest attacking threat came when England struggled to reorganise themselves during moments of transition, and at the uncertainty that sometimes existed around second balls.

Löw's team demonstrated composure in those moments – they played forwards with quality, creating goalscoring chances for each of Havertz, Müller and Werner. The organisation of England's back three and Jordan Pickford's authoritative performance also contributed to them recording another clean sheet, by limiting Germany's attacking potential during the periods they had established possession.