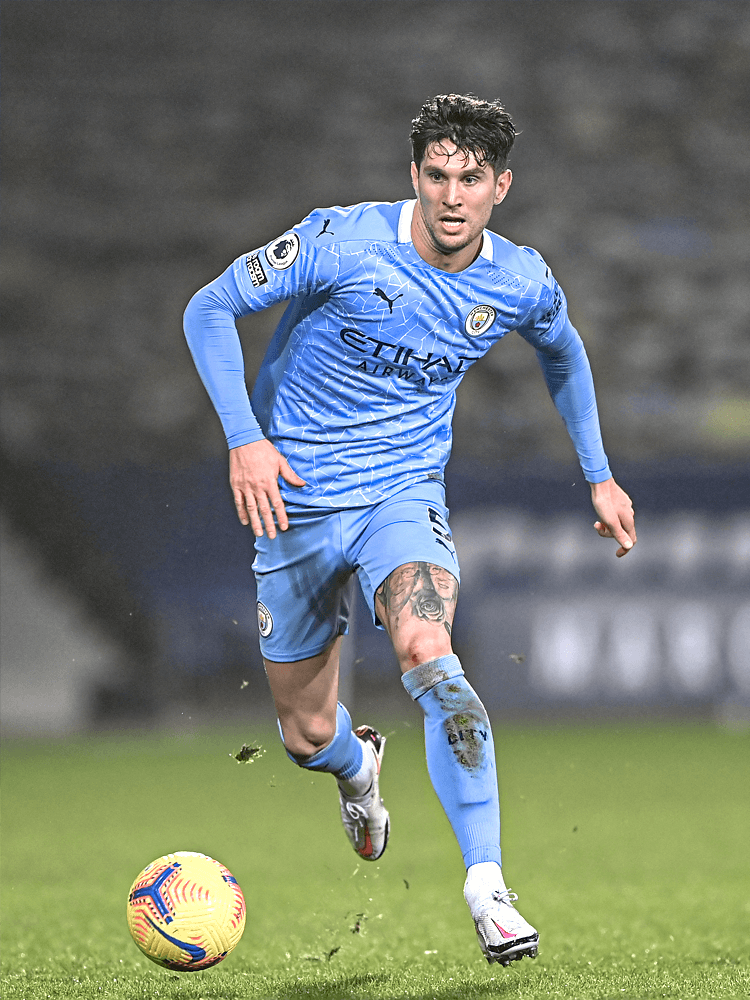 Profile
John Stones' emergence from a period in which his future at Manchester City appeared at risk, and into another that represented his finest form as a professional, was perhaps even more impressive when considering who he was competing with to feature in Pep Guardiola's starting XI. Rúben Dias cost a club-record £65m before the start of 2020/21; Nathan Aké a potential £41m; Aymeric Laporte was established as one of Europe's leading central defenders; Eric Garcia continues to be monitored by some of Europe's most decorated clubs.

City had made Stones the world's second most expensive defender when investing £47.5m to sign him from Everton when he was 22, in August 2016. Guardiola has rarely been reluctant to praise his players, but most at City were impressing at a time when he said of Stones: "If there is one guy who deserves the best it is John. He's struggled a lot but he's a fantastic human being. His parents must be so proud. He's had personal problems in the past, injuries. He's set up good and he's starting to play. Confidence is everything. He won his confidence for himself."

Tactical analysis
Stones is strong in the air when defending both set-pieces and during open play, and largely because he is 6ft 2ins and capable of leaping towards the ball with power and momentum, often over opponents. What particularly stands out is his ability to travel backwards with the flight of the ball; where most defenders lose power while doing so and therefore struggle to clear, Stones remains authoritative, which as a right-sided central defender he particularly demonstrates against crosses from his left.

When he is defending one-on-one, he tracks his opponent with a high level of concentration, both monitoring his off-the-ball movements and engaging him – most effectively doing so when challenging across him and using his furthest foot to attempt to tackle or dispossess that opponent. If his judgement of when to time challenges during an opponent's first touches is as reliable as that when leaving his defensive line to confront an opponent, his height means he also offers an increased distance of tackle (below). Those strengths prove similarly effective if opponents take poor touches or make errors in possession, and are often complemented by him using his frame to impose himself on the opponent attempting to travel beyond him or create a new angle forward.

When he is the player with the ball at his feet, there is a variety to Stones' passing, whether he is positioned centrally or has moved wider. From both areas he can break the first line of pressure – he most regularly targets those at the base of midfield – and potentially also play through midfield by bypassing the full-back alongside him to find the feet of the relevant wide player. If he is instead trying to find an attacking central midfielder or striker, his passes lack the same impressive accuracy.

Should a suitable pass not exist, he can instead break the line of pressure by carrying the ball into midfield, doing so with speed to draw players towards him and to free up those further forwards – something that is helped by the pauses and acceleration he uses to create new passing lines and and move opponents pressing him. Where his release once lacked quality, and risked conceding possession, that ability has improved. The timing of the execution of his passes has also improved and, if the option he seeks isn't available, he is equally capable of turning back to those still in defence while protecting the ball with his body before playing a low-risk pass and ensuring that the ball is retained.

Role at Manchester City
Stones has become City's most dominant defender, aerially, during 2020/21. His ability to provide cover amid passes and crosses has also improved, often making him their most proactive central defender – the first to directly challenge an opponent.

He and Dias have quickly developed a fine understanding. They have most consistently encountered opponents operating with one striker, and regularly work to cover behind the other; alongside Dias, Stones also makes numerous interceptions.

His role when they are building possession regularly changes. In addition to Stones featuring at right-back if City are building with a four and a midfielder has withdrawn into central defence and their right-back has advanced, City also regularly build with a back three, when he has been both the central figure and positioned towards the right. If he is not dribbling forwards (above) both approaches offer Stones numerous passing options – from right-back he consistently favours playing passes infield and, like Dias, he consistently succeeds in finding his target.

When City's starting right-back, most consistently Kyle Walker or João Cancelo, drift into central midfield (below), Stones has increased space to carry possession into midfield and to create the passing line sought to their right-sided midfielder – most consistently Riyad Mahrez. Walker or Cancelo will regularly draw the opposing left-sided midfielder when they move, creating more space for Stones, whose timing and accuracy contributes to him succeeding with his desired pass, even if playing that pass over a lengthy distance.

City's strength in depth and therefore the identity of their right-sided forward demands that Stones demonstrates his vision and intelligence. Where Mahrez prefers to remain wide so that he can cut infield after receiving, Stones resists following him to offer support around the ball and instead give Mahrez the space he relishes attacking into. Similar applies to Bernardo Silva or Phil Foden, and whether they are combining with a central midfielder instead of directly attacking.

If Raheem Sterling is instead selected in front of him, attempts to advance around the opposing left-back are considerably likelier. In those circumstances Stones advances further to offer an option for Sterling to set possession back to him, or to contribute to attempts to combine with City's nominal right-back, and ultimately then find either Sterling again or the forward run of an attacking central midfielder.