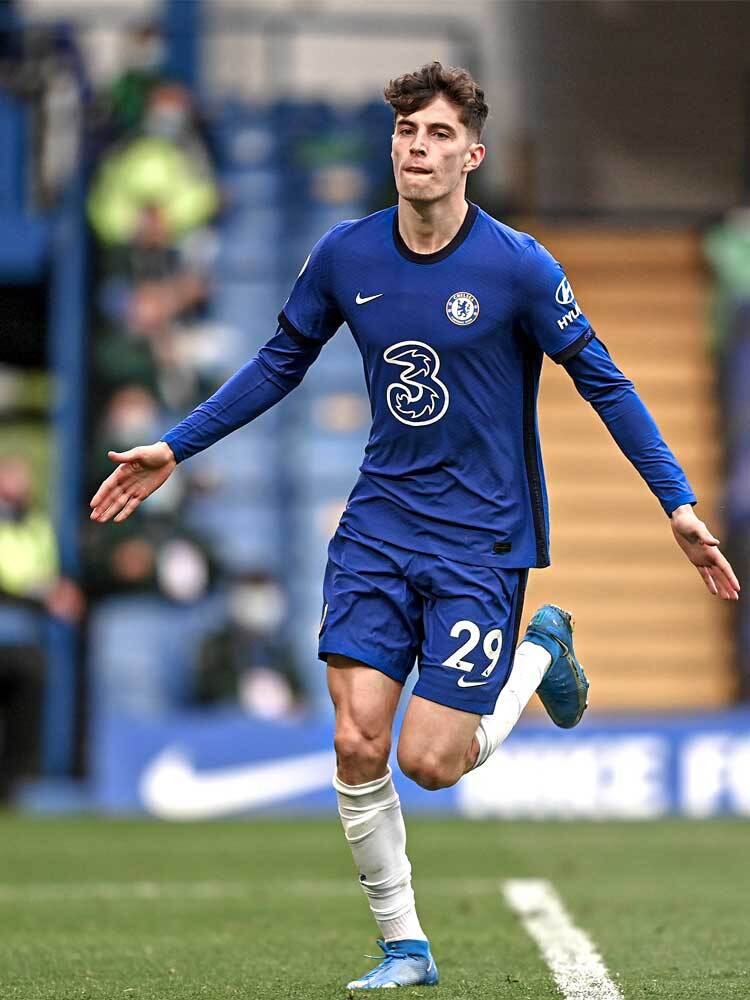 Profile
Kai Havertz became Chelsea’s second-most expensive purchase of all time when in September 2020 he was signed from Bayer Levekusen. At just 21 years of age, an initial fee of £62m represented something of a risk, and an indifferent start in London meant doubts quickly started to surface as to whether Chelsea were right to splash out on him.

Havertz struggled for game time in Frank Lampard’s 4-3-3, largely because there was no position that truly suited his qualities. He is wasted on the flank when the wide players in the front three have to provide the team’s width, and he does not suit a number eight role in midfield. Since Thomas Tuchel replaced Lampard, though, Havertz has shone in a 3-4-2-1 formation with a narrow front three who stay closer to goal. Tuchel believes he has the answer to the conundrum of Havertz’s best position.

“In my opinion right now, between a nine and a ten is pretty much his best position,” Tuchel said. “He has the freedom to drop, to move between the two positions, and to shift positions between a ten and nine. Between a nine, a ten and a winger: that is the space where can be decisive for us.”

Tactical analysis
Havertz is an attacking midfielder who is at his best playing from a central or right-sided position in a front three, but he thrives when he has the freedom to drift around the final third. He likes to withdraw towards play to receive to feet – often in an inside right position so he can turn infield on to his stronger left foot – or drop even deeper to help in the build-up phase while a teammate advances beyond him and into the space he has vacated.

When he is isolated and up against a single defender as play approaches, he will make a movement in behind before turning back towards the ball to create space for himself to receive, turn, and then face the defender up. He has fantastic close control and dribbling ability, so can quickly turn after receiving and then manipulate the ball to beat a defender when one-on-one. His clever movement also contributes to him being able to get on the ball between the lines.

After dropping into a deep position, he then shows desire to catch play up again once the ball moves into more advanced territory, and it is at that point that his lengthy stride comes to good use as he arrives late in the penalty area. He identifies space between defenders to move into while maintaining his momentum throughout his run and attacking the ball at speed to get a shot off (above). He has a decent shot with his left foot but could do with improving with his right, if only because his preference for using his left is so strong that defenders know which way he will shape his body to shoot. An improved right would make him less predictable in this regard.

He has the ability to control the ball in pressured situations and that means players in deeper positions can fizz direct balls to his feet (below). This ability combined with his movement from a more advanced position means a pass to Havertz can act as a trigger for teammates to run beyond him. More often than not he will retain possession in these situations, but his distribution could do with a little fine-tuning. He is sometimes too slow to set the ball back to a forward-facing teammate who is supporting underneath him because he usually first looks to advance play and only chooses to set it back once he realises a forward pass isn’t on. There also remain occasions when the detail of his passing lets him down, and a pass is played to a teammate's feet when playing it in front of them would have better maintained the speed of his team’s attack.

Role at Chelsea
Havertz plays either as the right-sided of the two number 10s in Tuchel’s 3-4-2-1 or as the striker, though when he is named as the most advanced player on the teamsheet, there is a speedy player who likes to run in behind – Christian Pulisic or Timo Werner – in one of the number 10 slots. Generally speaking, it is Havertz’s job to move towards play, and the attack-minded number 10’s job to get into the space beyond the opposition’s defence.

That said, Havertz has also shown more inclination to run in behind at Chelsea than he did at Bayer Leverkusen. He has been instructed to follow his movement into deeper positions with another run ahead of the ball, and he showed improvement over the course of his first season in England in how he moves to get into one-on-one goal-scoring positions. He also developed positive relationships with the other Chelsea attackers, in particular Werner and Mason Mount, with whom he combined for several goals.

Havertz forms part of the five-pronged front line that Tuchel likes his team to attack with – made up of the front three and two wing-backs who push high up the pitch (below). Havertz interacts with the other two members of the central front three to ensure at least one of them is stretching the opposition’s shape by threatening the space in behind and at least one is dropping towards play to pull a defender out of position.

He is also a useful player in counter-attacking situations, and on the occasions when Chelsea look to break at speed, he is able to carry the ball forwards at pace or make a supporting run to either side of the ball carrier and stretch the opposition. He is also particularly useful as the centre-forward in these situations because he is an option for a long, direct ball forwards, as he is able to use his body to hold play up while the likes of Werner, Mount, Pulisic or N’Golo Kanté run forwards.

Under Tuchel, Chelsea have a quick and dynamic attack and at the point of attacking transitions, at least three players will sprint forwards quickly to take advantage of the opposition being out of shape. Similarly, when Chelsea lose the ball in the attacking third – particularly in wide positions – they will press aggressively to shut down any chance of a counter. Havertz, athletic and willing in equal measure, is a key player in both regards and, after a slow start at Chelsea, has become an important member of the team.