Profile
Bukayo Saka was handed his professional debut by Unai Emery shortly after his 17th birthday at the beginning of the 2018/19 season, but it wasn’t until 2019/20 that he started featuring regularly in Arsenal’s first team. An academy product who was developed and first featured for Arsenal as a winger, Saka earned the trust of manager Mikel Arteta when deputising at left-back following a spate of first-team injuries. However, he has since not only moved forward into his favoured position as a wide attacking midfielder; he has also become one of Arsenal’s most important players before even turning 20. From a young age, Saka is showing the determination required to become an elite player.

“He’s really humble, really respectful and at the same time has that character to demand the ball, to make decisions that are not very usual for his age,” Arteta said. “We need that leadership, and he’s gaining that with his attitude and his performances. All the time, he’s asking to train more to improve in areas that he can do better.”

Tactical analysis
Arteta was in the Manchester City dugout during Freddie Ljungberg’s final fixture as Arsenal’s caretaker manager, when Saka came off the bench to replace the injured Sead Kolasinac. Arteta must have liked what he saw because, since being appointed Arsenal manager, he has become reliant on Saka. The youngster first became a key player on the left side of a back four that kept eight clean sheets in Arsenal’s first 16 games under Arteta, but it was always going forwards that he impressed most. He naturally looked better as a wing-back than he did at full-back, but he is even more effective as a wide attacking midfielder in a 4-2-3-1 formation.

Saka is a real creative force, capable of getting into dangerous positions and playing killer final balls. He is happy on either flank, but thrives when he has the freedom to move off the wing and into positions between the lines to receive passes (below). He has a rare ability to receive the ball on the half-turn between the lines and then progress play quickly. He takes the ball in with his back foot, adopting a side-on body position to move play forwards and protect the ball from a nearby opponent. Although England are producing more players capable of doing this, technical footballers who play between the lines remain a rare – and therefore hugely valuable – breed. 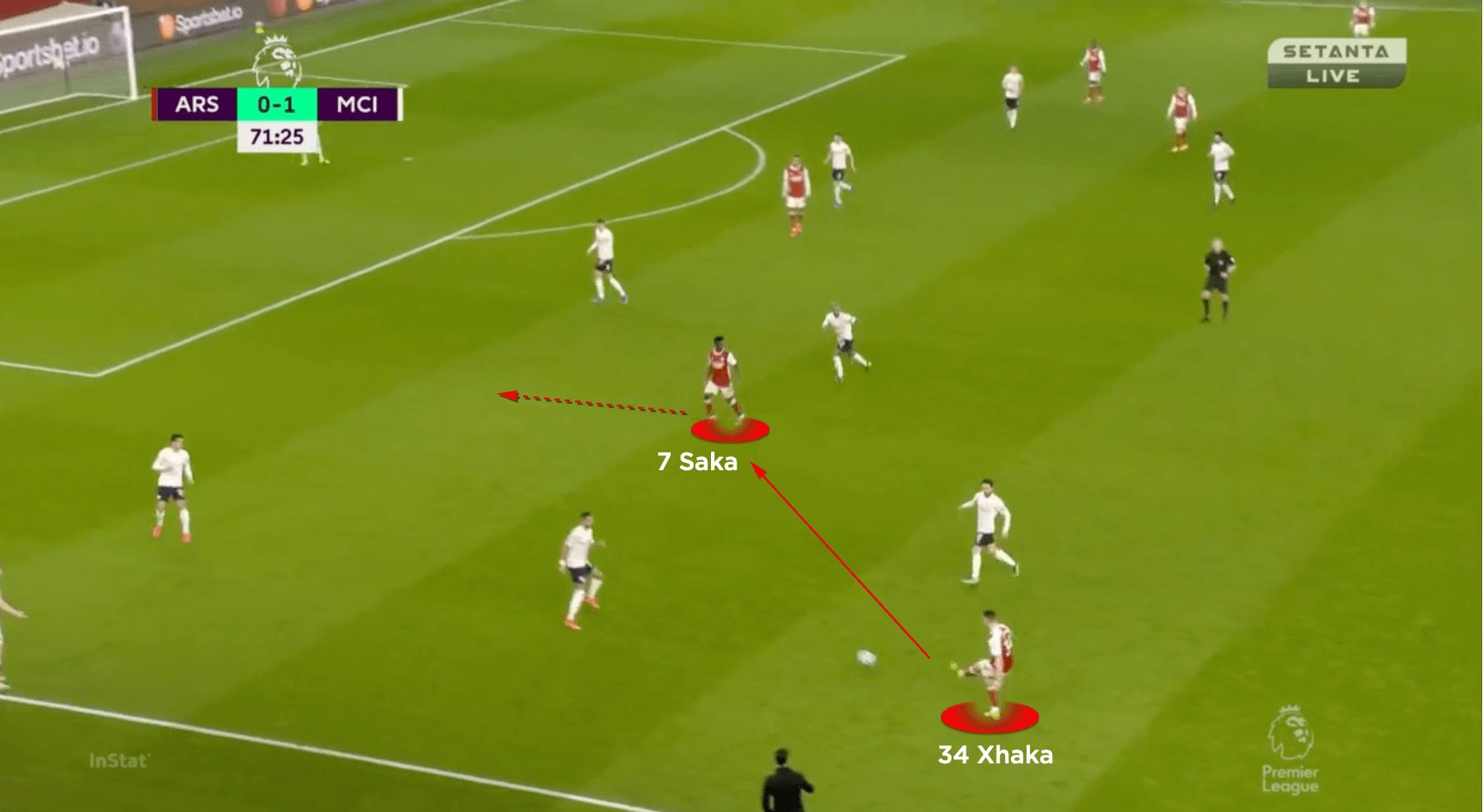 He has brilliant close control and dribbling ability and, when he isolates an opponent, he uses stepovers to draw the defender’s eyes towards the ball before quickly pushing the ball to one side – almost always on to his left foot – to deliver a ball forward. When he is playing on the right, he comes inside and is extremely dangerous when playing chipped balls or crosses towards the back post. His teammates know what to expect, and Saka targets the zone at the back post with these balls for players to attack, with Pierre-Emerick Aubameyang and Emile Smith Rowe among the players to benefit from Saka’s ability in these situations (below).

He is also adept at receiving the ball on the run and delivering crosses into the penalty area, though he is better when doing so from the left side. As he is so comfortable receiving the ball to feet, defenders are tempted to anticipate passes to Saka in order to get tight, but he takes advantage of a defender stepping out to pre-empt any pass by running in behind to receive and put a ball across the face of goal – much like Arteta’s old boss at Manchester City, Pep Guardiola, likes his team to do. One of Saka’s greatest strengths is his awareness, and he is adept at making split-second decisions based on constant scanning of his surroundings and what he sees opponents do in his peripheral vision. The combination of this ability and his acceleration can be deadly. 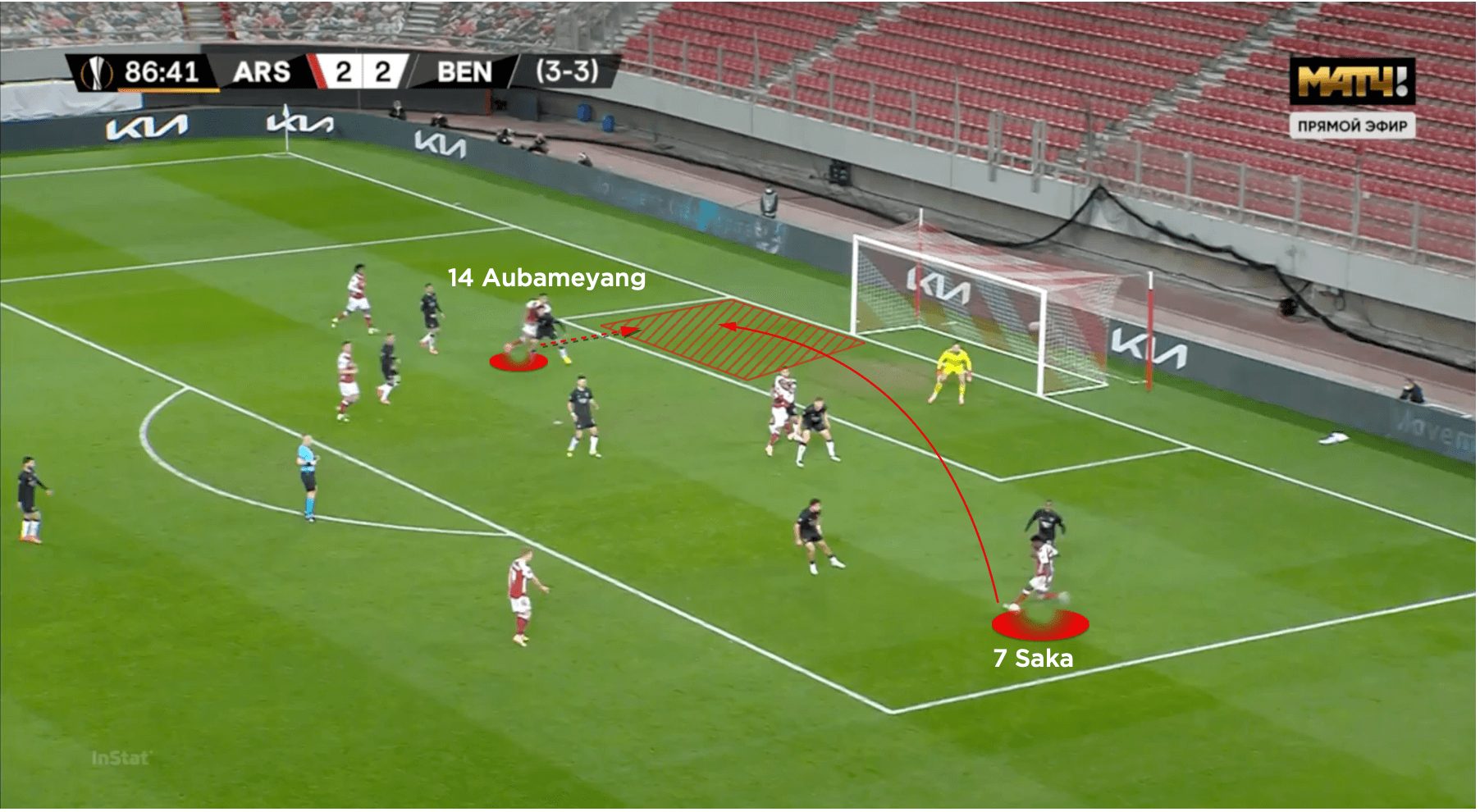 Defensively, Saka still has much to work on. He can be slow to react at the point of a defensive transition, and given how frequently he advances he often gets caught out of position when possession is lost. When he does show the energy and enthusiasm to press, he has some success, but using more intelligent angles when he presses could force more high turnovers. His pressing often leads to play being forced out wide and the ball going out of play – which is certainly useful – but it would be even better if it directly led to a teammate gaining possession and a chance being created.

Role at Arsenal
The left-footed Saka usually plays on the right side of the attacking midfield three in Arteta’s 4-2-3-1, though he sometimes plays on the left and combines with the hugely impressive left-back Kieran Tierney to great effect. When Saka plays on the right, though, Arsenal appear a more balanced outfit. Having Tierney and Saka – often the team’s two best sources of creativity and certainly the team’s best crossers – on opposite sides of the pitch means the team is less reliant on its left side.

Saka often trades positions with the other attacking midfielders in what is a fluid Arsenal team, but he most commonly takes up an inside-right position where he looks to get on the ball. From here, he will either look to find the feet of the centre-forward and combine, switch play or play a through ball for the striker to chase (below). He has good vision and is ambitious with his passing, so attempts through balls frequently, but he could improve his weight of pass – he has a tendency to underhit them.

This inclination to drift infield extends to further up the pitch, and Saka has clearly worked on adding to his goal threat. When play progresses on the opposite side of the pitch to him, he makes late runs towards goal and strives to get on the end of a cross or square ball across the face of goal. He is showing real intelligence to get into goalscoring positions close to goal, and the vast majority of his goals are first-time finishes from close range having ghosted in behind a defender to tap the ball home. 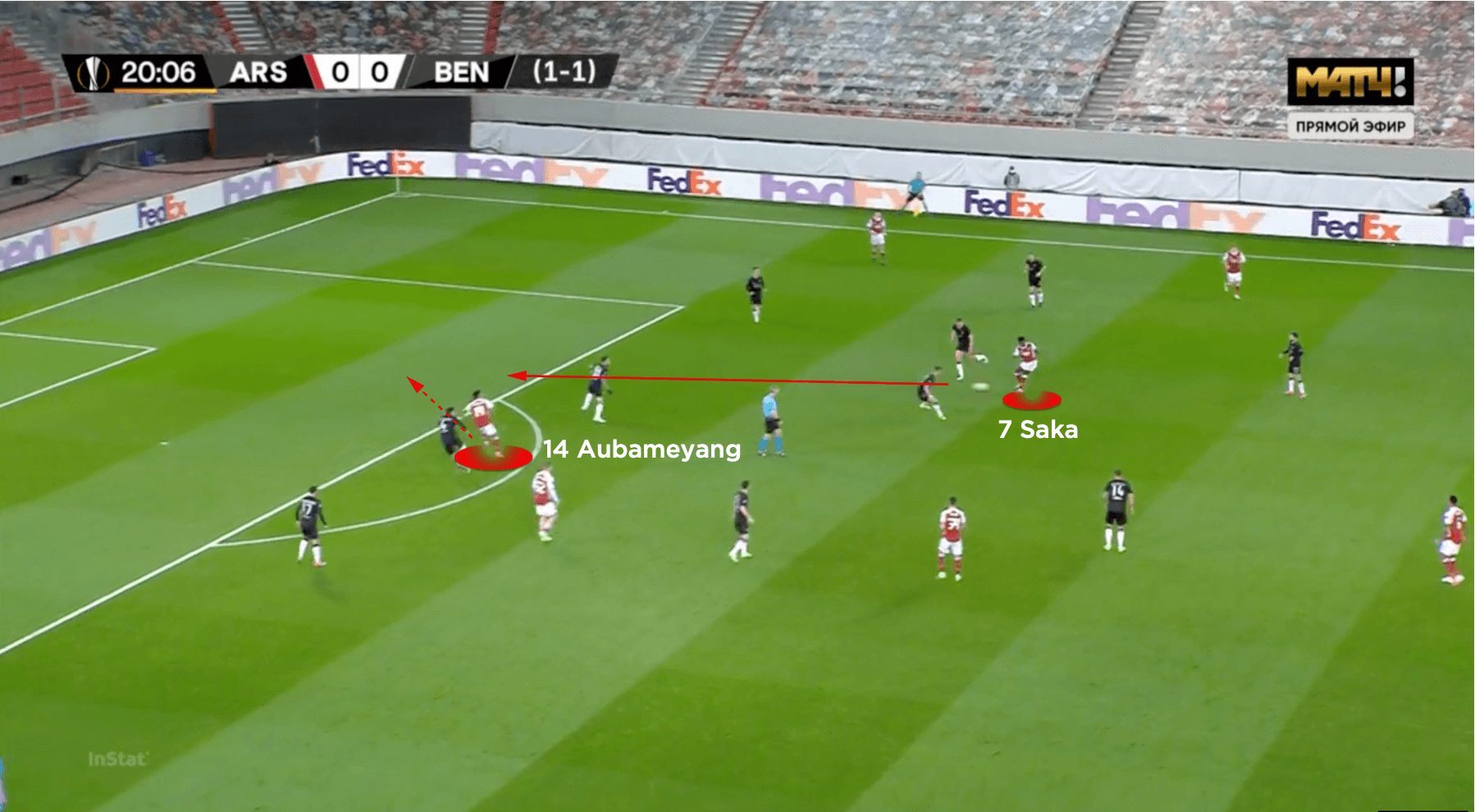 He combines well with the full-back on his side of the pitch, and his movement into the centre creates space for an overlapping run. He also uses the full-back’s runs – often adding a stepover – to create himself space to cross. Given how easily he does this and beats his opponent, he could do with improving his shooting from distance. He is certainly capable of finding space to curl a left-footed effort towards goal, but so far this has not proved a hugely significant part of his game.

While Arsenal once had a wealth of goalscoring attacking midfielders, in 2018/19 and 2019/20, they became too reliant on the goals of Aubameyang and Alexandre Lacazette. Saka – and the improving Nicolas Pépé – are doing a decent job of providing some much-needed firepower from out wide, but there is still room for more improvement and more goals are needed. However, the way the first few years of Saka’s career have gone, there is no reason to doubt that he cannot be the player to provide a good many of them. 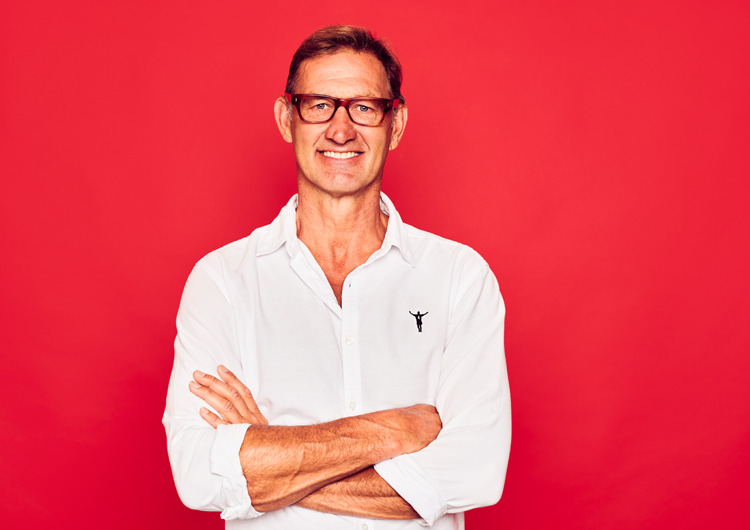 In 1989, Arsenal beat Liverpool to the title in the most dramatic fashion imaginable. Tony Adams, their captain at the time, tells his side of the story 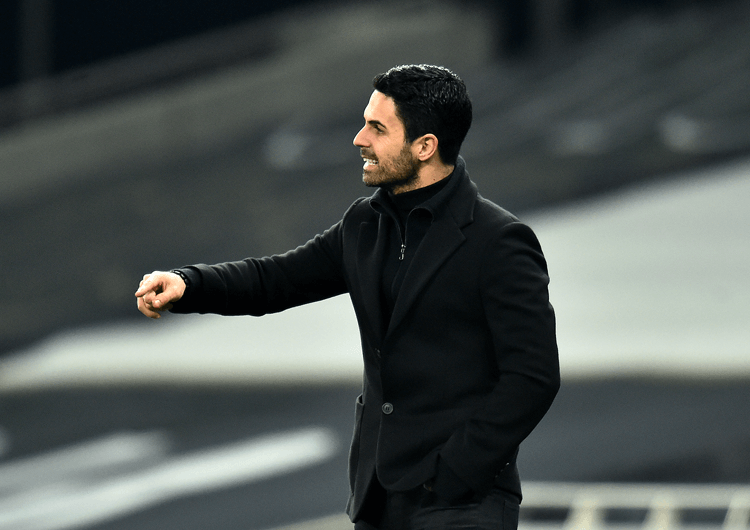 Pep Guardiola’s one-time assistant Mikel Arteta has regularly changed his philosophy during his year as Arsenal’s manager, with positive and negative outcomes 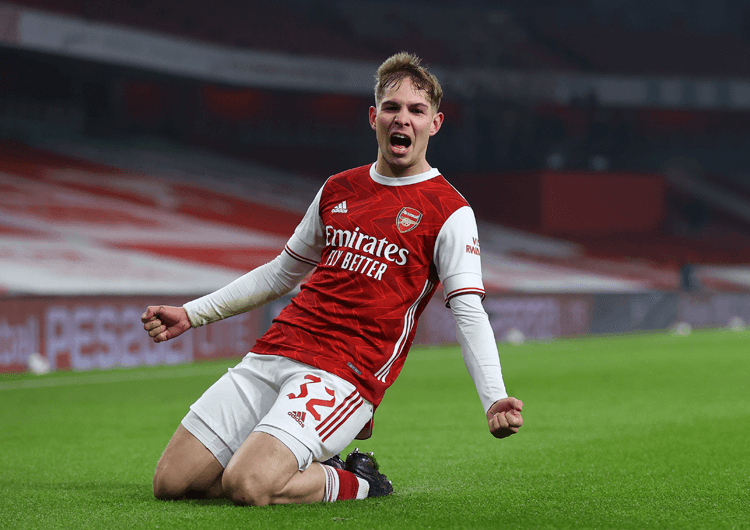 Emile Smith Rowe has quickly become a favourite at Arsenal, contributing to the departure of Mesut Özil and forming a promising partnership with Bukayo Saka