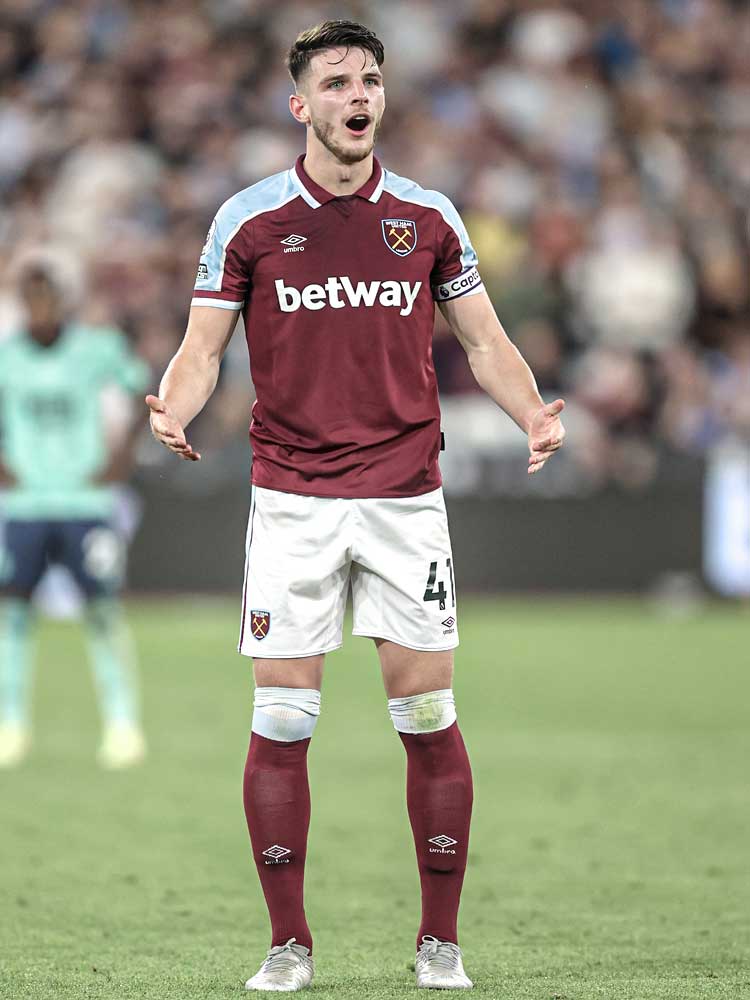 Profile
Declan Rice doesn’t carry himself like a junior member of the teams he plays in. Despite still very much being in the early stages of his career, Rice is a leader on and off the pitch for West Ham, and does a similar job when surrounded by senior players on international duty with England.

Rice has swiftly become an integral member of Gareth Southgate's team, and at club level, he and Tomas Soucek have combined to form a physically imposing central midfield two as West Ham secured a return to European football by finishing sixth in the Premier League in 2020/21. David Moyes, who has overseen West Ham’s improvement since returning to the club, understandably values Rice very highly indeed. “He is arguably the best holding midfield player in the country and the best thing about Declan is he will get better,” said West Ham's manager, speaking in February 2020 about the then-21-year-old. “I don't agree with the owners that he is a £100m footballer. Far, far more than £100m. Far, far more.”

Tactical analysis
Rice is a defensive-minded player who does his best work winning the ball and protecting his defence. His seamless conversion from a central defender into a defensive midfielder – where he has shown a real talent for delaying and breaking up attacks, particularly at the point of an attacking transition for his opponents – has proved just how naturally that side of the game comes to him. He has an ability to spot danger that only the best ball-winners have; Rice is similar in that regard to N’Golo Kanté. Like Kanté, he covers an awful lot of ground, and makes both tackles and interceptions in big numbers – even if he doesn’t quite match the Frenchman’s statistics.

Rice is a tenacious player, strong in the tackle and combative in the air. He is two-footed, and able to jockey opponents in either direction, and to turn and sprint either way should his opponent knock the ball past him and try and beat him for pace. He is so difficult to beat when one-on-one with an opponent that he has the incredibly useful ability to slow attacks down, allowing teammates to make recovery runs and regain their team’s shape before damage can be done (below).

His anticipation, agility and ball-winning ability means he is very capable at counter-pressing, and he often wins the ball back early on following a loss of possession before quickly distributing the ball to a more attacking teammate. That means that players further forward, such as West Ham’s wide attackers Jarrod Bowen and Pablo Fornals, can gamble on Rice winning the ball back by adopting a position beyond their direct opponent in the hope that Rice will get the ball their way quickly. That can be a risky approach, but it is one that pays in big rewards when it works.

A lot of the unselfish work that he does – and he does a lot – goes under the radar. He makes the kind of contribution to his teams that is often overlooked when assessing the impact of a player on a match or team because so much of what he does is a result of good positioning that will slow down opposing attacks or force play towards the wings. Rice’s most eye-catching work, however, is done after a regain, in turning defence into attack.

He is an incredibly powerful runner, and he is capable of carrying the ball forwards at pace to launch a counter or simply break lines before distributing to a teammate. He has the physical attributes to burst right through the heart of an opponent (below), and he can manoeuvre the ball to beat players that try to close him down before sprinting away from them. In those situations, opponents often resort to fouling him – or stretching the rules – to stop him.

He has very good passing ability, and it is improving, too. While he is good at retaining and recycling possession, he plays vertical passes where possible, and he has the ability to play accurate, long-range diagonal passes towards an advancing winger to switch play. Most of the time he is conservative with his passing – playing simple passes to more attack-minded teammates – but given he can play dangerous balls forwards, opponents cannot sit off him and allow him space to pick his pass. He is a more than capable link between defence and midfield. His aerial ability also means he is a threat at attacking set-pieces, and he is most effective when making a near-post run and glancing the ball towards goal – a tactic he has had some success with at both club and international level. However, he is more of a threat when challenging for and pouncing on loose balls in the area, when his anticipation is again of real use.

Role at West Ham
Rice’s all-round ability and his formidable partnership with Soucek means his manager can play formations with just two central midfielders: West Ham manager Moyes favours a 4-2-3-1 in games where he wants his team to dominate the ball and a 3-4-3 when he wants more security or simply to match the opposition’s shape. Southgate is also able to play a midfield two with Rice in his team.

Soucek’s success since arriving from Slavia Prague has had a positive impact on Rice’s club form. The Czech Republic international and Rice alternate positions regularly but, of the two, Rice has slightly more freedom to attack. He makes lung-busting runs to drive his team towards goal, though it is rare to see either player advance beyond the ball.

If either is caught out of position, they will make every effort to quickly get back into the out-of-possession shape that is such an important part of Moyes’ philosophy. That shape involves Rice and Soucek remaining close together and near to their defence with the aim of limiting the opposition's space between the lines and preventing passes through the central lanes (above). Moyes likes his teams to funnel play to wide areas wherever possible, and Rice and Soucek do a good job of ensuring that that happens.

Rice plays a key role in winning the ball back, and then transitioning into attack with forward passes. During established periods of possession, he also does an important job in helping West Ham break the opposition down with line-breaking passes into Bowen, Fornals or Saïd Benrahma. He also likes to pull out wide, usually to the left side of their centre-backs after Aaron Cresswell has advanced from left-back, before switching play over towards the right (below). He is far more effective playing those balls from left to right than he is from right to left.

He is a real force in West Ham's midfield, able to dominate opponents physically and with the ball at his feet, and he is a significant part of the reason West Ham have shown such marked signs of improvement under Moyes.

The West Ham manager might have done Rice a disservice by calling him a “holding midfield player” because there is so much more to his game than defending. His assessment of him as a player who is worth more than £100m might just prove accurate, though, given how important he is to their team. The truth is that even an offer that big might not be enough to tempt West Ham into selling such a key figure.