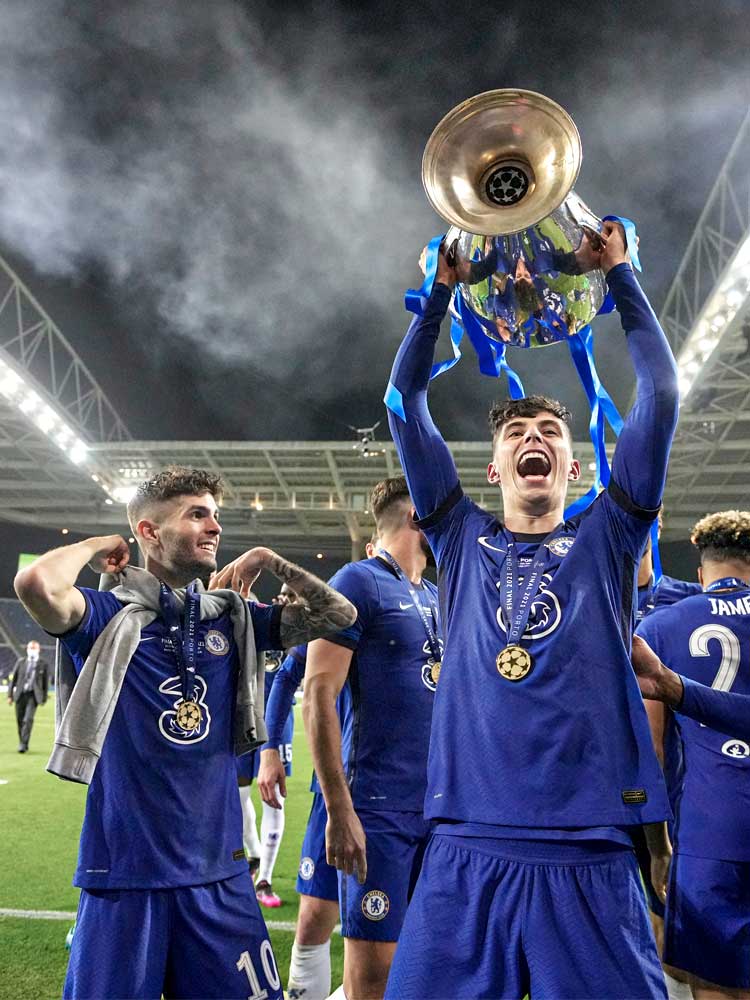 Chelsea won their second Champions League title and denied Manchester City their first with a clinical victory over their rivals at Estadio do Dragao in Porto. Kai Havertz scored the evening's only goal towards the end of the first half, ensuring his first season at the club, having arrived as their record signing, ended on the same triumphant note as Thomas Tuchel's impressive first four months as their manager. Tuchel had suffered defeat in last season's final, with Paris Saint-Germain, and said: "We overcame some difficult moments and some very dangerous moments with a fantastic attitude to defending. We had to make an early change with Andreas Christensen coming on for Thiago Silva, which did not make things easier, but we were brave. Even in moments where it was hard to escape the pressure, we kept the formation and were constantly active." Ten years have passed since Pep Guardiola led a team to the Champions League, and after City's first final, he said: "It was a tight game and we played a really good final. We showed courage, especially in the second half."

Manchester City were organised by their. manager Pep Guardiola into a 4-3-3 formation led by the front three of Riyad Mahrez, Raheem Sterling and Kevin De Bruyne, and featuring Ilkay Gündogan at the base of their midfield. Their opponents, Chelsea, defended with a 5-2-3 or, if City had a particularly strong grasp of possession, a 5-3-1-1.

Chelsea's press was led by their front three of Kai Havertz, Timo Werner and Mason Mount, who between them worked to keep the ball away from the areas City offered potential. Behind them, Jorginho and N'Golo Kanté offered additional support in the centre of the pitch. Chelsea attempted to minimise City's time on the ball, and where possible to dictate play. If they were under threat in their defensive third, their back three of César Azpilicueta, Thiago Silva and Antonio Rüdiger became more compact and worked to limit the spaces City were seeking to create.

Mahrez and Sterling consistently adopted high and wide positions in an attempt to stretch Chelsea's defence, to occupy Ben Chilwell and Reece James, and to create increased space for Phil Foden, Bernardo Silva, and Gündogan to combine in. De Bruyne operated at the highest point of City's midfield, from where he sought to contribute to their attacks.

City's goalkeeper Ederson was often influential in starting their attacks. His composure and ball-playing ability, even when under pressure, often meant him delivering passes through or around Chelsea's press, and occasionally into space behind Chelsea's defence for Sterling or Mahrez to chase. If instead throwing the ball out he targeted Gündogan, aware of Gündogan's ability to start counters during moments of transition.

Their full-backs Kyle Walker and Oleksandr Zinchenko adopted advanced positions from where they sought to contribute to City's attacks when the ball was on their side of the pitch. Zinchenko's freedom to advance meant him regularly attempting to play from the inside channels and to create both a midfield four and further passing lanes. If either he or Walker adopted narrower positions, their movements triggered Mahrez and Sterling drifting as wide as possible.

The injury suffered by De Bruyne meant him being replaced by Gabriel Jesus, who operated as an orthodox striker, and Foden instead featuring at the tip of City's midfield. Fernandinho replacing Silva then meant Fernandinho featuring as their defensive midfielder and Gündogan adopting a more advanced role towards Foden. When Sergio Agüero also came on, for Sterling, he instead featured as their central striker and Jesus moved wide. City's defence, by then, was also operating from advanced territory as they kept Chelsea under pressure without scoring an equalising goal.

Thomas Tuchel set Chelsea up in a 3-4-2-1 formation in which Timo Werner, Mason Mount and Kai Havertz formed their front three. Manchester City had periods of defending with both a 4-4-2 or 5-3-2 in which Phil Foden remained their most advanced player.

Mount, Werner and Havertz regularly rotated positions, which made them difficult to mark. Each proved comfortable at driving forwards with the ball at their feet and at withdrawing into deeper territory to link play from midfield. Each also contributed to Chelsea's efforts to send possession into particularly advanced territory before cutting it back and using the momentum of the movements of City's defensive players to create space for their front three to attack.

Raheem Sterling and Riyad Mahrez withdrew into midfield, where the relevant midfielder was instructed to abandon his position to apply pressure to the in-possession opponent in an attempt to discourage Chelsea from playing out from defence. They complemented those efforts with a high press from which Foden sought to cut the passing lane between their central defenders, and to force possession towards one side of the pitch; it was also Sterling or Mahrez who withdrew further on the occasions City defended with a back five.

Jorginho and N'Golo Kanté regularly received possession directly from Édouard Mendy or the defenders behind them, and Reece James and Ben Chilwell would move to receive from in front of them so that they could continue to progress possession before supporting Mount, Werner and Havertz in the final third. James often received the ball in an advanced, central possession when City were disorganised, and attempted to quickly combine with his attacking teammates; Chilwell, in turn, remained high and wide to stretch City's compact defence, and in doing so contributed to them scoring the game's only goal by increasing the space Havertz ran into before providing the finishing touch.

Kanté adopted more advanced positions than Jorginho, and regularly carried possession forwards as Chelsea progressed into the attacking third. He expertly used his body shape to screen pressure from his opponents, and attempted to spin into space to continue to play forwards. Jorginho was likelier to remain withdrawn, and prioritised creating both passing lanes in midfield and supporting Chilwell towards the left.

After the introduction of Christian Pulisic, Chelsea targeted City when they were transitioning into possession. They followed regains by quickly playing the American in, and did so at a time when City were committing increased numbers forwards in their pursuit of an equalising goal. Increasingly, Tuchel's team also became content to maintain possession and to retain players behind the ball – to manage the game, instead of to penetrate forwards.