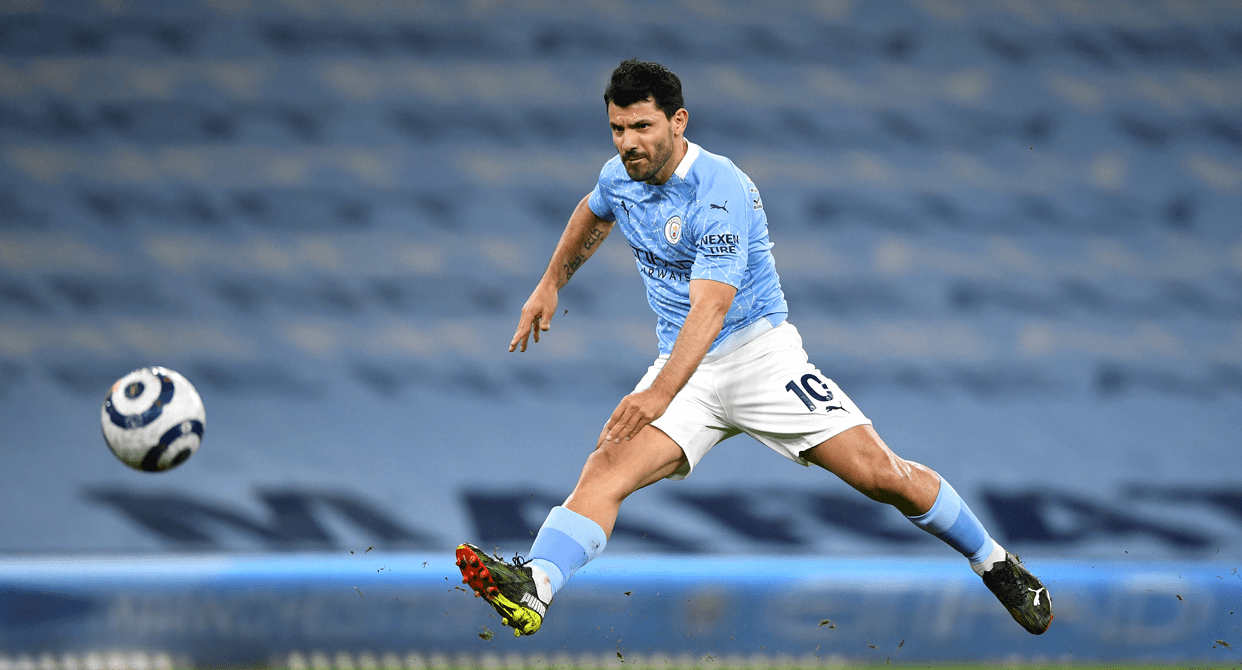 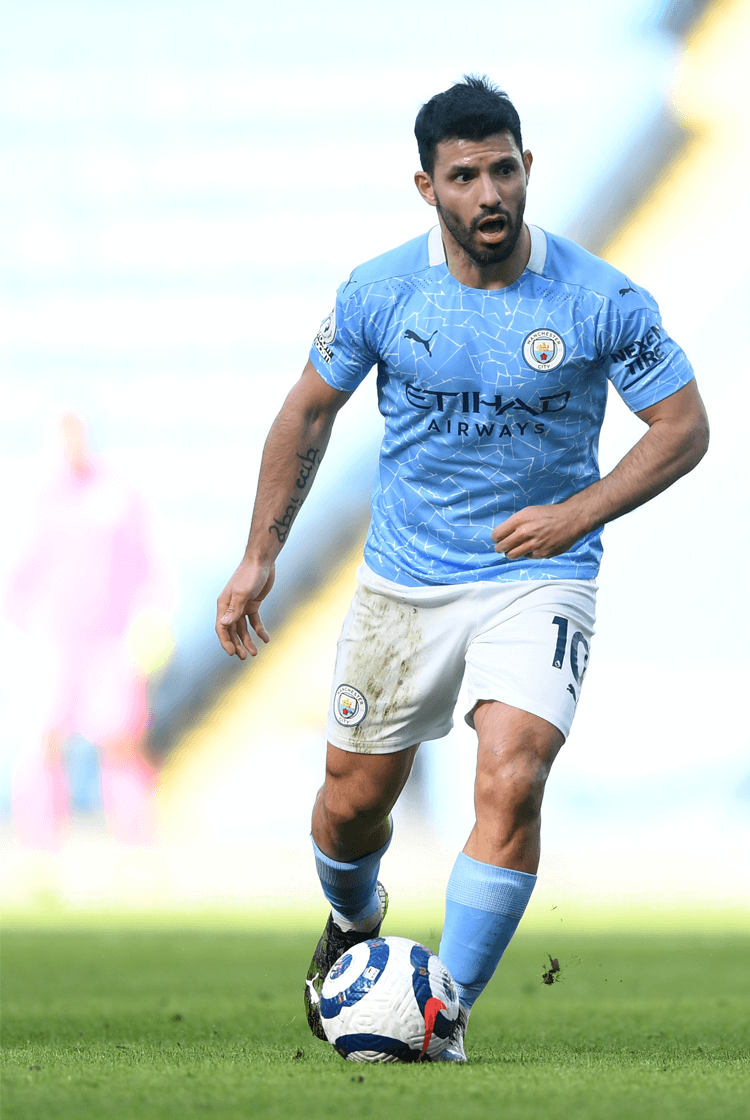 Profile
Over almost a decade in England, Sergio Agüero established himself as one of the greatest centre-forwards of the Premier League era, surpassing Thierry Henry as the highest-scoring foreign player in the division's history despite persistent injury problems. Over a period of unrivalled spending at Manchester City and under three different managers, Agüero has also been an irreplaceable member of the most successful English team in that time, winning a vast number of trophies and awards, both in a team and on an individual level. Confirmation that he will leave City after 10 years at the end of 2020/21, as he turns 32, unquestionably represents the end of era. Agüero, David Silva, Vincent Kompany and Yaya Touré were those most responsible for delivering so much success, and by the start of 2020/21 only Agüero remained.

“He’s a guy in the box with a sense of goal,” City's manager Pep Guardiola said of the Argentinian. “He can score from everywhere, in all the positions. He’s an incredible striker, incredible. That he has more goals than a legend like Thierry Henry is an incredible achievement – many, many goals.”

Tactical analysis
Agüero is one of the world’s best strikers largely because he gets into a position to score so frequently – be that through clever off-the-ball movement or working a shooting opportunity of his own. The timing of his runs and subtle movements to lose a marker and get on the end of a ball into the penalty area are some of his greatest strengths.

An attacker who looks to get in behind opposing defences, Agüero tends to make his runs on the blindside of a central defender to give him the best chance of getting in on goal, and if that defender turns to see his run, it will mean they have taken their attention off the ball, also giving him an advantage. Though he is also comfortable withdrawing towards play, Agüero’s instinct is to be more penetrative with his movement; he has also adjusted his game to better suit Guardiola's style of play since the Spaniard's arrival at City.

The calibre of pass that comes his way at City certainly contributes to the success he has, and he has built a hugely effective understanding with their playmakers, particularly Kevin De Bruyne. Having taken a central position, usually between the opposing centre-backs, Agüero increases his speed as soon as he sees his teammate glance up to look his way (below) and makes his move into space in the hope of providing a bigger target for the player delivering the ball.

The majority of his shots and goals come off a single touch, an ability that makes him even more dangerous in the box because he doesn’t need time to set himself before taking a shot. However, when he has the time and space he is capable of taking an additional touch, readjusting, and getting his shot off quickly if the attempted assist is not as accurate as he had hoped or towards the wrong foot. He requires such little backlift to generate power in his shots that he doesn’t need long to take a touch and get a shot off.

The combination of his movement and positioning complements his finishing ability. He is relatively strong in the air and can finish with both feet and with power and accuracy, and consistently catches opponents off-guard before ruthlessly punishing them.

His skill set is also far from limited to his finishing – he arguably does not get enough credit for his contribution to build-up play. He has improved significantly at dropping into deeper positions to draw an opposing centre-back out of position and link play. He rarely catches the eye because he doesn’t have the vision or passing ability to play killer passes like a centre-forward such as Harry Kane, but he plays an important role in disrupting the opposition’s defensive line through his movement and a simple passing game that means he usually retains possession – something that is key for Guardiola.

Role at Manchester City
It speaks volumes about Agüero’s importance to City that he has remained their first-choice centre-forward throughout his time in Manchester and, perhaps most significantly, for the duration of Guardiola's time at the club. Speculation as to whether Agüero was the type of forward Guardiola favoured when he took over in 2016 persisted – some questioned if Agüero was comfortable enough coming to get the ball in deep positions and if he could adapt to the demands and intensity of Guardiola’s coaching and playing style.

Those doubts have proven unfounded. Agüero not only kept his place in their team but has been City’s top goalscorer every season between his arrival in 2011 and 2019. He was beaten to that title by Raheem Sterling in 2019/20, when injury meant he started only 18 Premier League games. It was also in that season, with Agüero absent for significant periods, when City were beaten to the title by Liverpool by the significant margin of 18 points.

City make the pitch as big as possible when they have the ball, and Agüero is key to that, stretching play by pushing high, often beyond the opposition's defence, to try and force them back. When City are building out from the back, he stays in an advanced position to create space for their midfielders to operate in (above).

He provides a focal point for their attack, but given they almost never play long balls he very rarely has to hold play up for a long time to wait for others to join him. He instead holds his position and waits for play to reach him. He will regularly be by some distance the City player to have the fewest touches in a game.

On the occasions he does drop into midfield, he does a good job of pulling a centre-back out of position, creating space for Sterling – who plays on the left but spends a great deal of time on the last line of the opposition's defence – to run into. When Sterling does so, another defender will often go with him, leaving even more space for an advancing number eight or full-back to move into (above).

It is close to goal, however, that Agüero’s contribution to his team’s play is greatest. He is one of the Premier League’s all-time leading goalscorers, relying more on his movement and understanding with his teammates than particularly exceptional finishing. Under Guardiola he has tended to score a similar number of goals to his expected goals total, whereas the likes of Kane, Mo Salah and Jamie Vardy will often heavily outscore their xG tally, suggesting Agüero scores the good chances that come his way and takes fewer of his half-chances than his rivals; he just gets into good positions to score more often than anyone else in England.

Agüero is a truly great player whose longevity, despite injury problems and his share of doubters, is genuinely remarkable. He remains a crucial member of one of the best teams in Europe, and it will be interesting to see for how much longer that is the case.