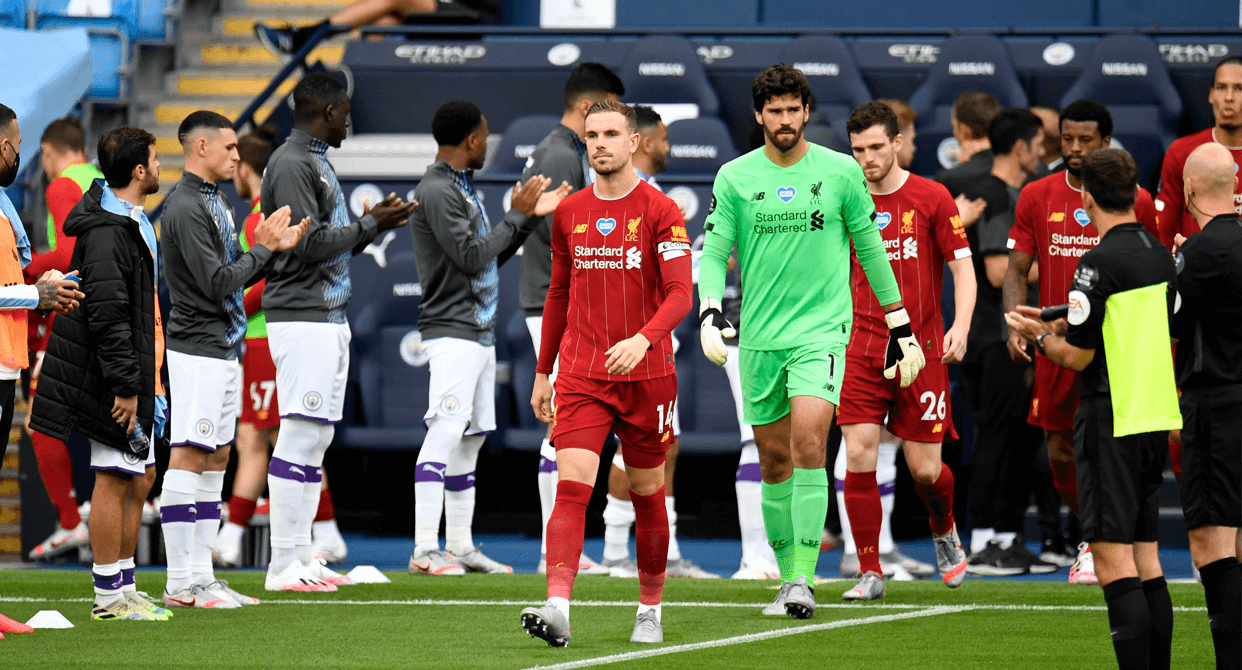 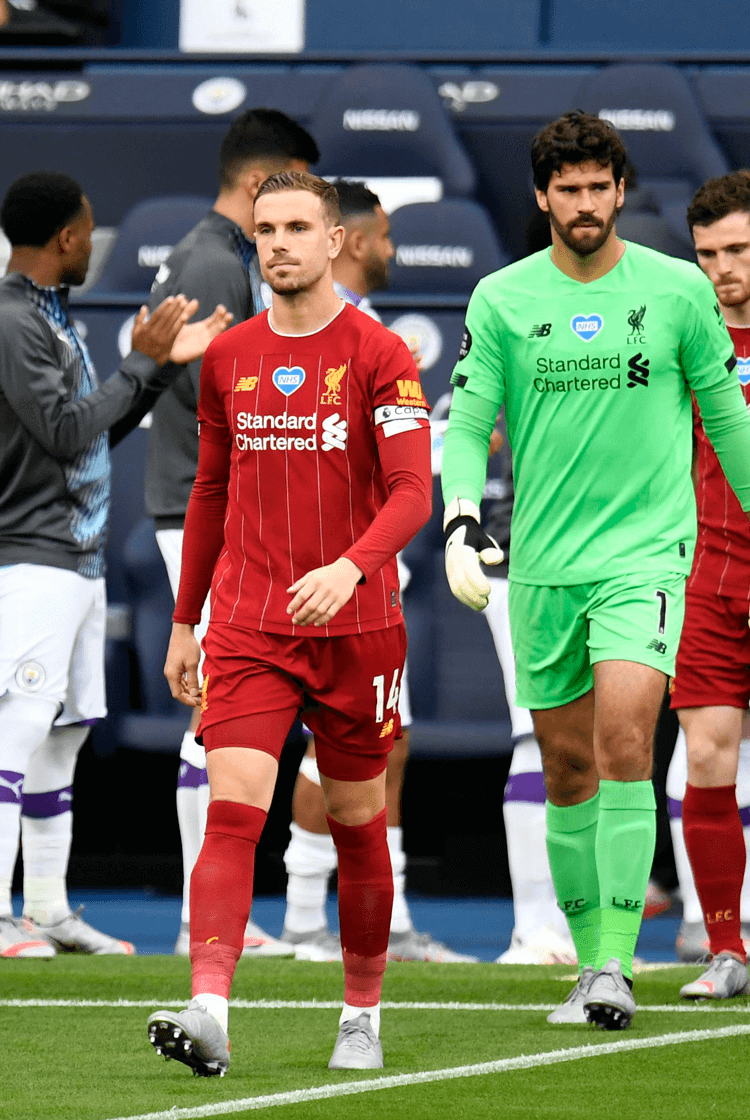 Where the Premier League title was lost and won

The one-point deficit by which Liverpool missed out on the Premier League title to Manchester City in May 2019 was, in the space of a little over a year, turned into an unassailable lead with seven games of 2019/20 remaining. Liverpool’s progress under Jürgen Klopp has been astonishing; Pep Guardiola's City have fallen so far behind them that they finished closer, in points, to fourth place than first.

Where has the difference between England’s two strongest teams emerged over the past season? Our professionals explain.

Liverpool’s improvement in possession
Klopp brought vast success to Borussia Dortmund with a 4-2-3-1 formation set up to employ a suffocating gegenpressing and counter-attacking style. There was an expectation something similar would be seen when he moved to Anfield in 2015, but he possesses a team that has far more depth than his brilliant German champions.

There is still a focus on the fast-paced football that made Dortmund so formidable, but Liverpool are also extremely dangerous when they have comfortable possession of the ball – and arguably far more than they are given credit for. They very rarely fail to break a team down, even when opponents sit back in a deep block for an entire 90 minutes.

Andy Robertson pushes high up from left-back, and the right-sided central midfielder – usually Jordan Henderson or Georginio Wijnaldum – has the freedom to push forwards on the outside of Mo Salah to add another body to their attack. Roberto Firmino has mastered the centre-forward role that Klopp asks him to play, withdrawing into deep positions (below) to draw defenders out of position and link play with clever touches and flicks that can be crucial in finding a way through a deep block.

Firmino’s positioning is vital in Liverpool creating the overloads in central areas that allow him to take the ball between the lines. This is a position from which he is extremely effective at making chances for Salah and Sadio Mané – Liverpool’s biggest goal threats and top goalscorers. Once he has played his pass, Firmino has also improved significantly when it comes to timing his runs into the penalty area to meet crosses, even if his finishing leaves a lot to be desired; his nine Premier League goals in 2019/20 was a disappointing total given his xG tally for the season suggests he should have scored 16.69 goals. That statistic regardless demonstrates how many quality goalscoring chances Liverpool have been making for their centre-forward. They are wasting plenty, but are still easily the best team in the country.

Security in defence
Guardiola’s team have outscored Liverpool so far in 2019/20. The biggest difference between them, despite what transpired when they met at the Etihad, has been at the other end of the pitch.

Virgil van Dijk's arrival tightened Liverpool's defence – they have been fortunate to keep him fit for the entire season – and the emergence of Joe Gomez has given Klopp another high-quality option in central defence to compete with Joël Matip. The main improvement, however, has been in their organisation – each player knows how important their individual role and position is in the collective success of their team.

Their main form of defence is in their superb counter-pressing. Upon a loss of possession, players swarm the opponent who has the ball to try and win it back as quickly as possible by working in tandem to crowd them out. Once they have the ball back, Liverpool launch another attack to build pressure on the opponent’s goal.

If the opposition do manage to keep hold of the ball, Liverpool’s entire defence and midfield make swift recovery runs to get back into their 4-3-3 out-of-possession shape (above). Their goalkeeper Alisson is always ready to sweep behind a high defensive line, in front of which hard-working midfielders keep the distance between defence and midfield to a minimum. Van Dijk and whoever partners him are confident in their ability to deal with any aerial threat that comes their way.

The same cannot be said for City, who have been far too open at the back. They have struggled, in particular, against high balls into their area, conceding far too many goals from crosses – including two headers in their defeat at Anfield in November.

Influential absentees
Title-winners will usually experience some good fortune, and Liverpool have had their share with injuries. Klopp might attest that he has managed his players’ game time intelligently, and his recruitment team may also argue that they have signed players who are not prone to injury. Liverpool suffering so few injuries is probably a combination of all three.

Full-back contributions
Much has rightly been made of Liverpool’s sensational full-backs, who are so dangerous going forwards that they have eight more Premier League assists between the two of them (25) in 2019/20 than City’s three leading wingers, Riyad Mahrez, Bernardo Silva and Raheem Sterling, have in total (17).

Robertson plays higher and wider than Alexander-Arnold (below), who has perfected his crossing technique and tends to deliver balls into the area from a deeper position than his left-sided teammate. Both from open play and dead balls, Alexander-Arnold is among the best crossers in the world – and, at 21 years of age, there will be many more assists to come. The pair also regularly combine with switches of play that have proved an effective tactic when it comes to stretching opposing defences.

The tireless work they do running up and down the pitch, almost performing dual roles as wingers and defenders, means that at least one – and often two – of Liverpool’s central midfielders can sit back and protect both the central defenders and the spaces in behind their marauding full-backs. This in turn reduces the chances of being punished on the counter.

Guardiola doesn’t ask his full-backs to attack as much as does Klopp, meaning central players such as the prolific assist-merchant Kevin De Bruyne are expected to push further forwards to give sufficient weight to their attacks. Given City’s goal haul, that way of playing has clearly served them well with the ball – but when they lose it, and particularly with Fernandinho forced to play in defence so often this season, their centre-backs have been exposed far too often.

Composure under pressure
Liverpool have been in a winning position at some stage in almost every game of 2019/20, but by the time the title was secured they'd not dropped a single point after taking the lead. There have been plenty of games in which they have been one goal up and conceded but have gone on to win, and plenty more in which they have conceded once having been 2-0 up but held on to win.

City, meanwhile, dropped nine points from winning positions in 2019/20. Had they not dropped those points they would still not be anywhere near Liverpool – but that statistic in isolation hints at a fragility not present in the title winners.

Guardiola’s side also made a habit of conceding goals shortly after another goal has gone in – at either end. City don’t concede many, but too often they concede a second shortly after letting one in. On six separate occasions in league games in 2019/20 they have conceded two goals in the space of 10 minutes. Compare that tally to Tottenham's, who spent much of the season struggling but did not concede twice inside 10 minutes on a single occasion, and City’s problems seem even more stark.

They also let in too many goals immediately after scoring, with eight conceded within six minutes of recording a goal. It all points to poor game management – something that certainly cannot be said of the champions.

City are very nearly the complete product, however, and Klopp knows it. Having watched City thrash Burnley 5-0 in late June, he remarked that he couldn’t believe “how it is possible anybody is 20 points ahead of this team”.

Klopp’s Liverpool, however, are way ahead of the chasing pack. As their nine league defeats indicate, Guardiola has much to change if City are to catch up.