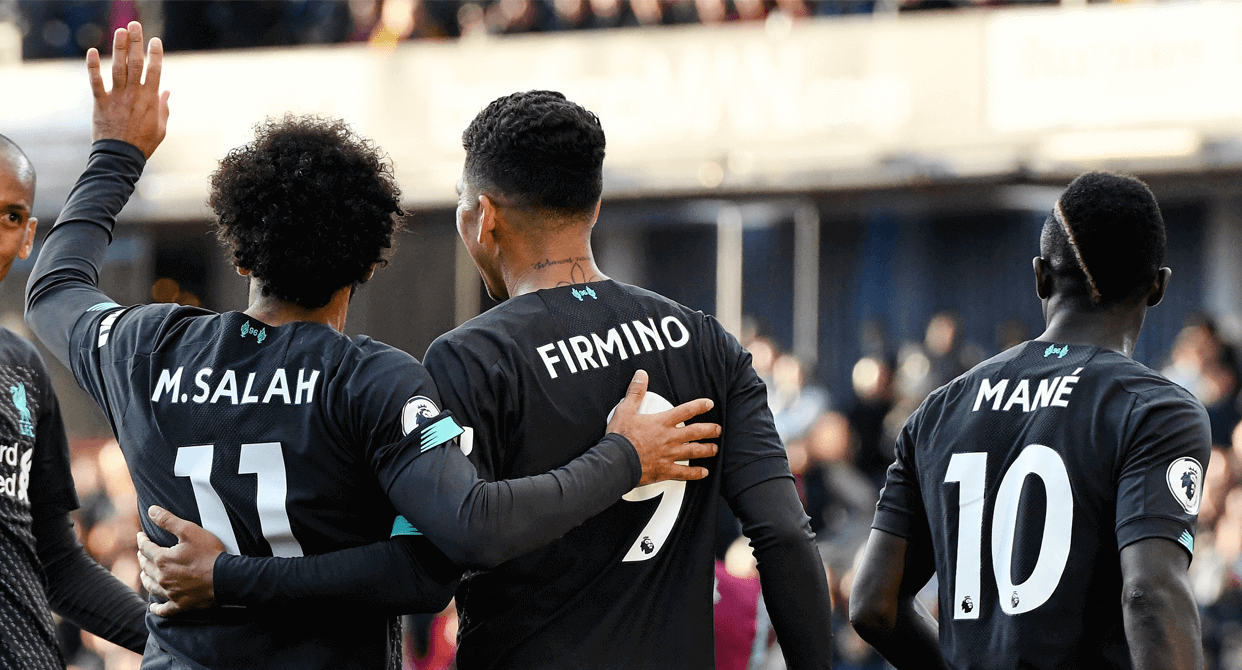 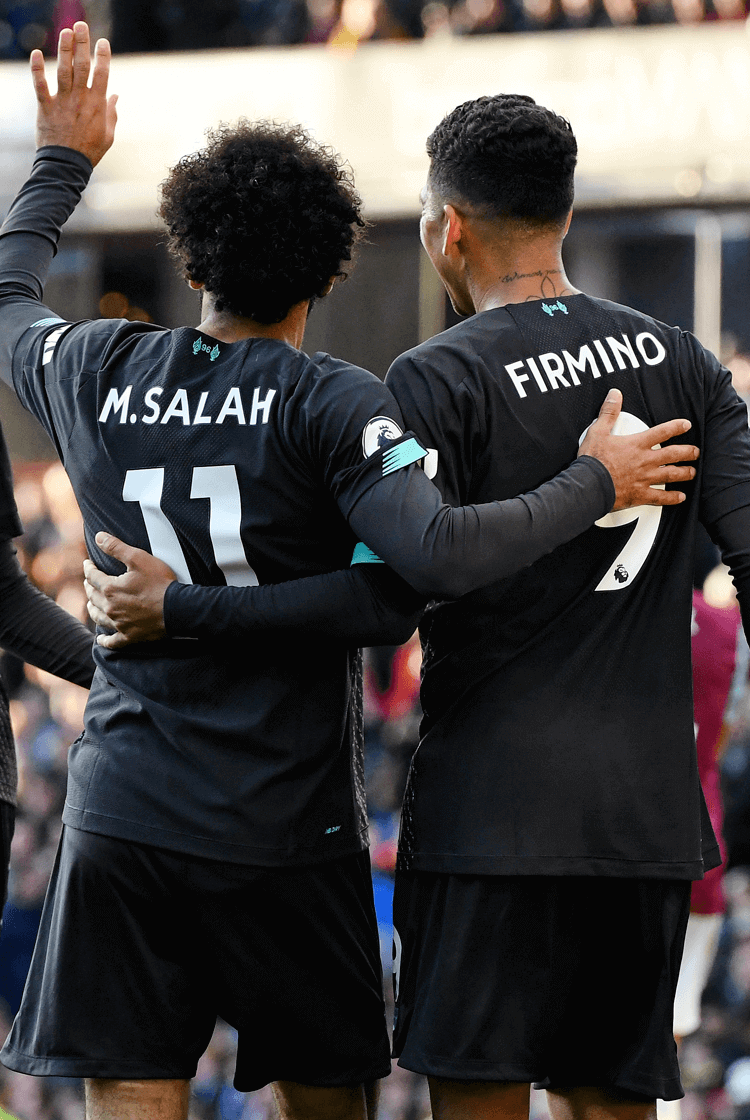 Profile
Messi, Suárez, Neymar; Rooney, Ronaldo, Tevez; Messi, Pedro, Villa; Ronaldo, Bale, Benzema. If there was a pantheon of the best front threes of modern times, Liverpool’s Mo Salah, Roberto Firmino and Sadio Mané have arguably done enough to join it under the guidance of Jürgen Klopp. With an almost perfect combination of pace, power, technique, lethal finishing and mutual understanding, Salah, Firmino and Mané are irresistible at their very best. Having sealed Liverpool’s first league title in 30 years with seven games to spare of 2019/20, they then passed a significant landmark in July 2020 when they made it to a combined 250 goals for the club – Salah led the way, scoring 94 in148 games, ahead of Mané on 79 from 166 and Firmino's 77 from 240.

Roberto Firmino
Firmino is often considered the link between Salah and Mané, and therefore the most creative of Liverpool’s brilliant front three. He has become a hugely influential player since Klopp’s appointment – he arrived as an attacking midfielder during the summer of 2015, before Klopp, when Raheem Sterling left for Manchester City – largely because he is the individual most capable of playing as a false nine, a role that has of course become crucial to Liverpool’s attacking play.

In 2017/18, when Liverpool’s development under Klopp really accelerated, the Brazilian’s defensive contributions were significant in them dominating moments of transition. He adopted advanced positions to win the ball back closer to the opposition's goal and, from his centre-forward position, was the second most prolific tackler in Klopp’s squad. An increasing quantity of Liverpool’s goals came from Firmino’s turnovers high up the pitch.

During the following season their approach became more possession-based – which it remains – with Firmino taking up more withdrawn positions during build-up play and Mané and Salah doing more of the high pressing that Firmino had previously done. It has sometimes even been the case that the full-backs are seen counter-pressing higher up the pitch than Firmino.

When Liverpool have the ball, Firmino drifts away from the opposition’s defence in search of space, and regularly drops so deep that he takes the ball in front of the opposition’s midfield. Where he previously stayed higher, and in doing so invited Salah and Mané to run diagonally on the blindside of a centre-back, Firmino’s increasingly deep positioning instead encourages them to move infield at an earlier stage of an attack, and to remain there for longer. Liverpool are typically forced to build their attacks for lengthy periods, given they encounter low-block defences so often, and Firmino’s positioning helps create central overloads alongside Klopp’s midfield three in their attempts to play through their opponents (below).

Their two wider central midfielders will often move beyond Firmino to attack through the inside channels or wider areas, joining Salah and Mané in attack with line-breaking runs. His positioning away from opposing central defenders is often the key to releasing his teammates in attacking positions. Furthermore, as he showed when leading Liverpool’s press, Firmino is willing to do significant defensive work, and is positionally aware enough to react at defensive transitions by looking to regain the ball from a deeper position.

Mo Salah
Salah’s role in Liverpool’s front three has also changed. Where in 2017/18, his first season at Anfield, he was most commonly used as a wrong-footed wide forward who received possession wide on the right and attacked inside his opposing full-back, he has since come to operate more centrally.

The Egyptian’s change of pace, ability to subtly cut inside opponents, and accurate finishing made him prolific from a wide starting position. The impressive development of Trent Alexander-Arnold, who has since provided Liverpool’s width on the right, however, has led to Salah moving closer to goal when the right-back attacks. They have built an impressive understanding, and Alexander-Arnold’s ability to play accurate long balls means Salah makes runs into the right channel when the right-back is in a withdrawn position.

When Alexander-Arnold receives the ball, Salah will sprint forwards to stretch the opposition, and look to reach the end of a whipped ball in behind the opposition’s defence (below). Doing so has proven an effective method through which Liverpool gain territory quickly.

His combinations in more central positions – often with Firmino, Mané and the right-sided midfielder – remain consistent, and he is very effective at finding a route through a crowded defence with neat, intricate combinations. He requires little backlift to shoot, has exceptional dribbling ability, can shift the ball quickly on to his stronger left foot, and is brilliant at disguising shots before playing a pass to a teammate before looking for the return.

He is among the best in the world at finding routes through a compact opponent and, given his pace and agility, can also implement Klopp’s intense counter-press well. Salah is therefore perfect as the right-sided forward in Liverpool’s attack.

Sadio Mané
Mané’s role has also changed over his time at Liverpool. Recruited as a transitional right winger, Salah’s arrival and the emergence of Liverpool’s adventurous full-backs has contributed to Mané’s gradual progression into an inside forward who plays from the left. Andy Robertson is the more athletic of those two full-backs, and Mané’s role is very much intertwined with the Scot’s relentless overlapping runs. Both Mané and Robertson work tirelessly on the left in both directions, providing consistent attacking thrust and recovery runs.

Robertson’s crosses tend to come from deeper into opposition territory than Alexander-Arnold's, following a combination with Mané and the left-sided central midfielder (above). Alexander-Arnold’s from the right have greater accuracy, control and variety, meaning that he often crosses from isolated or underloaded positions without beating an opponent, leaving Salah free to move infield at an earlier stage of the attack. Robertson, in contrast, often requires support before delivering into the penalty area; Mané therefore holds his position on the left to help Robertson, and delays his runs into the middle.

Mané has increasingly frequently moved centrally, however, to provide a direct threat on goal with runs beyond the opposition’s defence. His acceleration is so devastating that he is sometimes able to make it into the area to attack Roberton's crosses, and it has become more common for him to look to get in behind when Firmino is appearing in deeper positions. He has become as big a goal threat for Liverpool as Salah.

Klopp’s team used to lack that threat on the left, but their domestic, European and world success under Klopp owes partly to the greater consistency with which Mané scores, because he has taken a great deal of pressure off of Salah. His explosive finishes, speed of thought and sharp movements make him lethal in front of goal, and as a result Liverpool have two world-class goalscorers playing from wide in the final third. Most crucial of all is the on-pitch understanding – a vital ingredient for any successful front three – Firmino, Salah and Mané have.