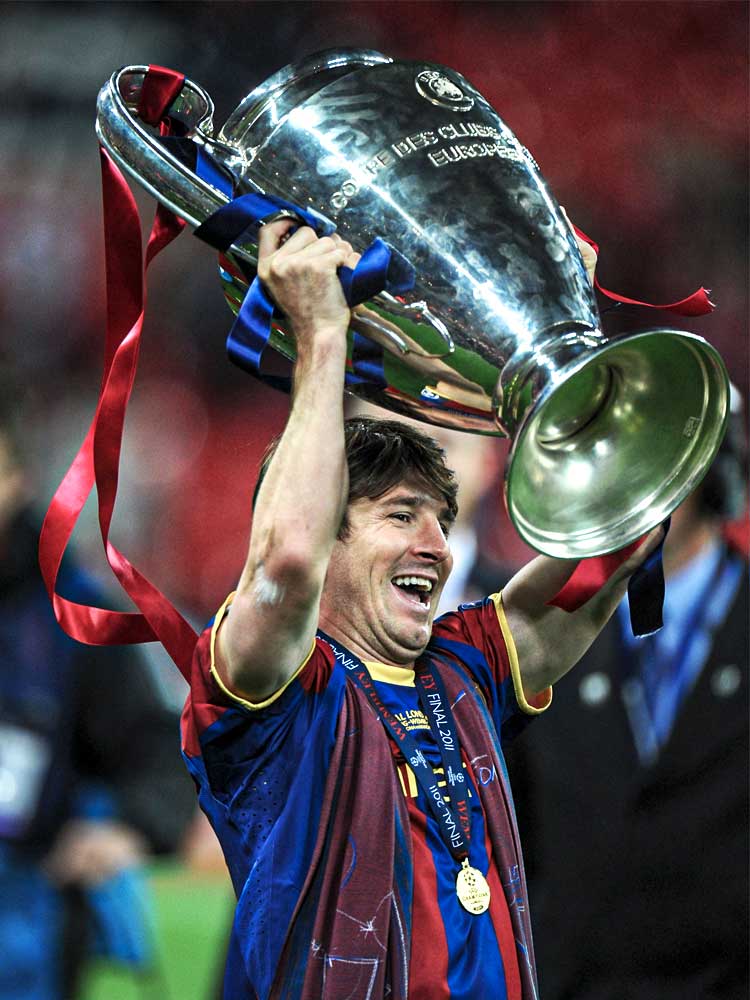 The team widely considered the greatest of all time may have peaked the night they so convincingly dismantled Manchester United, that season's Premier League champions, in the Champions League final. United were competing in their third final in four years, but for all of their experience and quality, had little answer to Lionel Messi, Xavi Hernández and Andrés Iniesta on an evening when they impressed even more convincingly than they had two years before, when Barcelona won 2-0 in Rome. So many of Barça's players also represented the core of the team that led Spain to the World Cup a year earlier, and that a year later would retain the European Championships. Wayne Rooney's equalising goal, after Pedro had given Barça the lead, ultimately flattered United. Messi and then David Villa scored during the second half, ensuring the great Edwin van der Sar's last match as a professional would end in defeat. Barcelona manager Pep Guardiola afterwards described Messi as "the best player I have ever seen". Perhaps even more significantly, United's, Sir Alex Ferguson, said: "In my time as manager it is the best team we have faced."

Barcelona were organised by their manager Pep Guardiola into a 4-3-3 formation built on the midfield three of Xavi Hernández, Andrés Iniesta, and Sergio Busquets. Their opponents, Manchester United, defended with a 4-4-1-1.

The frantic opening exchanges were followed by Barça quickly establishing control of possession and managing the tempo of play. Wayne Rooney and Javier Hernández were tasked with showing Javier Mascherano and Gerard Piqué towards the full-backs alongside them, to negate the three-on-two that otherwise would have existed, so Xavi withdrew into deeper territory in the half-spaces to encourage them to instead press him and create an extra number in the defensive third, making it easier to play forwards. The movement that followed them doing so was complemented by a principle Barça used across the pitch. As soon as Xavi had played the ball beyond United's front two, he moved forwards on the blindside of Rooney or Hernández and into midfield, creating a further overload.

Lionel Messi also withdrew from further forwards and back into midfield, where Barça were so determined to be in control. His movements were supported by the positioning of Pedro and David Villa, who remained high and wide, restricting United's back four from advancing with Messi. Nemanja Vidic occasionally followed him into midfield but appeared uncertain over whether or not he should, and when he did, Villa made diagonal runs into the space that had become open in behind, increasing the pressure Vidic was under to remain in defence.

Barça were soon fully in control, and to the extent they performed as though they had a numerical advantage, such was their success in creating overloads. Mascherano and Piqué played into the feet of any of their three midfielders or Messi, drawing pressure from United's midfield, and the ball was then returned to their defence before an attempt was made to penetrate through the space that had been vacated by the United midfielder who had moved to apply pressure, via one of Barça's spare midfielders moving there. It was that approach that led to Xavi receiving between the lines and feeding Pedro to score the opening goal.

Iniesta also often drifted into the left half-space and between the lines, and from that position regularly received the ball. United's attempts to adjust included positioning Rooney on Busquets and their midfield four adopting a narrower shape, but Barça recognised them doing so so instead started capitalising on the three-on-one that existed against Hernández via a central defender advancing with the ball and drawing an opponent to the ball to again create an overload in midfield. They also targeted the wider spaces, when Dani Alves and Eric Abidal offered potential.

Beyond the extent to which Barça were already testing them, United also struggled with Barça's relentless off-the-ball forward movements. With Messi dropping into deeper territory, and Xavi and Iniesta making runs in the opposite direction as a pass was moving between two players, forwards run from the third man often went untracked.  When Alves and Abidal started to attack, Park Ji-sung and Antonio Valencia adopted deeper positions, often narrowly in front of Evra and Fábio, but doing so proved disastrous because of the increased space it offered to Xavi, Iniesta, Busquets and Messi, and the reduced defensive cover that existed against them. Barça's second goal came when Messi received, dribbled and finished amid a three-on-two he, Xavi and Iniesta had towards the edge of the penalty area. Even with the score at 2-1, victory already appeared close to secure, because there appeared little chance of United having sufficient possession to score again.

United became visibly frustrated at their lack of success in regaining possession. In addition to Barça's quality in the centre of the pitch, the timing and quality of the off-the-ball movements of Villa and Pedro impressed further; Barça building centrally forced United into a narrower, more compact shape, so Villa and Pedro held their positions outside of that shape and made late diagonal runs towards goal, either to receive outside of their opposing full-back, or beween that full-back and the closest central defender. That, also, ensured that Barça continued to threaten, contributing to one of the most complete performances any team has ever produced.

Manchester United manager Sir Alex Ferguson favoured a 4-4-1-1 formation in which Wayne Rooney featured narrowly behind Javier Hernández. Barcelona defended with the same 4-3-3 with which they attacked; between them, their front three of David Villa, Lionel Messi and Pedro sought to press from the front.

Wherever possible, United attempted to perform with a high tempo, and to target the runs Hernández made in behind. Pedro and Villa closed down the outside shoulders of Rio Ferdinand and Nemanja Vidic, to force possession into the central areas of the pitch where Barça had a numerical advantage. United prioritised, where possible, finding their full-backs, because of the potential advantage their wide players offered against Barça's full-backs.

Barça attempted to negate that with a particularly intense out-of-possession approach. Their ball-side central midfielder occupied his opposite number, but if possession was bounced infield and then out to a full-back, that same midfielder continued to press out to the relevant full-back, freeing up Barça's full-backs to prioritise United's wide midfielders and ultimately avoiding them being underloaded in United's attacking third. That intensity contributed to United making errors when they were attempting to build possession, and regularly conceding the ball, increasing Barça's sense of control.

Ferguson's team showed greater promise when the speed of their play increased; it was shorter, quicker passes that led to Rooney scoring their equalising goal, against the run of play. United increasingly then attempted to complement regains with, as early as possible, forward runs intended to take advantage of Barça transitioning from attack to defence, but Barça's awareness of them doing so largely negated their efforts.

It was even Barça's counter-press that led to their third goal. Sergio Busquets regained the ball inside United's penalty area, leading to Villa being presented with the chance to shoot, and ultimately find the top corner. United simply had too little of the ball to create further chances of note.