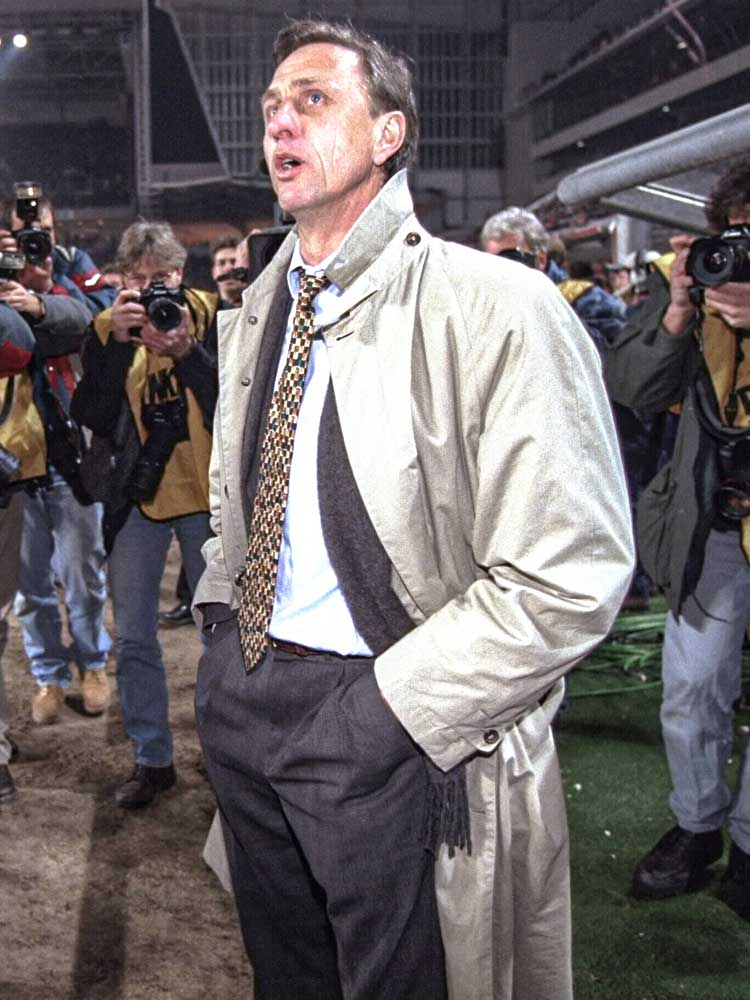 Johan Cruyff: In Others’ Words

There has perhaps been no more influential a figure on modern football than the late, great Johan Cruyff. One of the finest players of all time, Cruyff, whose death was mourned by the world of football when he died of cancer at the age of 68 in 2016, was also the architect of what remains the most admired football philosophy ever thought up.

At the height of his coaching career – he managed Barcelona from 1988 to 1996 – he built the revered Dream Team in which future Barça managers Pep Guardiola and Ronald Koeman also excelled. The team then widely considered the greatest of all time, managed by Guardiola from 2008 to 2012, also owed so much to his legacy – not only did Guardiola build that team in Cruyff's image, but the talents of its leading players, Xavi Hernández, Andrés Iniesta and Lionel Messi, were nurtured in La Masia and the youth system Cruyff overhauled. Even those not fortunate enough to have ever worked alongside the Dutchman, or to observe his methods, have spoken to The Coaches' Voice about his remarkable influence. The first, regardless, knew him better than almost any – the first is his son.

"When I start doubting myself, I always think: 'What would my father do in this moment?'

"Then, when I make a decision, I go for it. Just like he did.

"That conviction is really important and, for me, it comes from him.

"In everything I do, my father, Johan Cruyff, and Sir Alex Ferguson are both very present. Particularly when there is a man-management issue."

"Perhaps one of the most important lessons was taught to me by one of the greats, Johan Cruyff. It wasn’t a technical or a tactical concept. It was about the human side of the game.

"Cruyff would come to the afternoon training sessions with the under-15s; the under-16s – all the different age groups – and he’d join in the rondos with us. He’d come to La Masia and he would know your name, say hi; ask you how your studies were going. It was amazing for us that the first-team head coach, a legend both as a player and coach, knew all our names and was genuinely interested in us.

"That was one of the first things I started doing when I became Valencia's general manager. I started getting to know every single player in all the youth teams by talking to them whenever I saw them at the training ground, and I watched them all train and play as often as possible.

"I honestly believe it was that sort of thing from Cruyff which made Barca so successful in that period. It’s something I will always do, wherever I’m working."

– Francisco Rufete was a youth-team player at Barcelona, while Johan Cruyff was the first-team manager, from 1992 to 1996

"The day that Johan Cruyff showed up in my career was like heaven's doors opening for me.

"He had been a special player – someone I had watched when I was a child. My memories of him were exciting, and now I would be playing for him.

"His plan was to play with a diamond in midfield, with four men playing inside. Then I saw the way he planned to incorporate that diamond, with three defenders behind and three forwards. From the position I took in the middle of the pitch that offered many possibilities for a pass.

"There was a huge new range of possibilities for me as a player. It was a joy to see the footballing idea that Cruyff brought, and to see so soon how it worked so well.

"Training was very different to what I was used to. Before, the players' physical condition had always been the most important element. Under Cruyff, technique took precedence.

"Technique; tactics; positioning exercises; short games. Everything was always with the ball. It was like when I was a kid and played with my friends in the streets in my hometown.

"Then there were the practice games. Short, competitive matches with teams of three players. It felt like we were having fun every day. Cruyff's way helped us get results too."

"I remember when Johan Cruyff’s Barcelona came along.

"You played against them, and you spent the whole match running after the ball. I said to myself: 'This is what I like. I would like to be in this team, and know why this is happening.'

"How can you get a team to have the ball permanently, so that the opponent is running after it for the whole match? From then on, I started to make sense of what I had felt throughout life, through my career.

"I started to really watch football. To analyse it. To understand what I felt, and what I wanted to put into practice when I became a coach."

"I was an advocate of Johan Cruyff so I loved what he brought to Barcelona, and how his image and style was retained, and the belief that they had in that.

"I admired clubs that had an inherent belief in young players. Then you travel to Holland, and you have the Ajax model, which is similar in football philosophy to Barcelona.

"Those journeys broadened my horizons, and gave me a real good knowledge."

"When Johan Cruyff came here it was my first year at Barcelona.

"He wanted to have another player outfield.

"He would also expect that our positioning would be related to our teammates, so that we always had the option to pass the ball at any moment, to keep the game going, but also to defend the large space that would be behind our central defenders.

"In those situations goalkeepers had two responsibilities. Firstly, when the team is attacking, keeping an eye on our two closest men, so that at all times we could intervene with any transition in which the ball may get behind. That was the first substantial change in the goalkeeper's position.

"The other scenario was when we had the ball and an opponent was putting pressure on us, we had to be located in relation to the play, in order to create the first overload. If the opponents decided to press when we had the ball, we used to create a passing lane in order to create that first overload. We had to be moving constantly in relation to the ball, our teammates, and the opponent."

"It was clear to me that what I had learned with Johan Cruyff, I couldn't keep only to myself.

"I wanted to do the same as he did with us. Teach it to the players. Try to make each one of them better, through training.

"That is the main reason I decided to become a manager. Johan taught us a lot and we also felt qualified to teach things to the players.

"Each of his training sessions was a masterclass.  Johan was also a very demanding coach. You had to give your maximum in each drill. If that wasn't the case, he would quickly realise it.

"On the pitch he taught me to think what was really happening and what we could do. He made me understand the game."