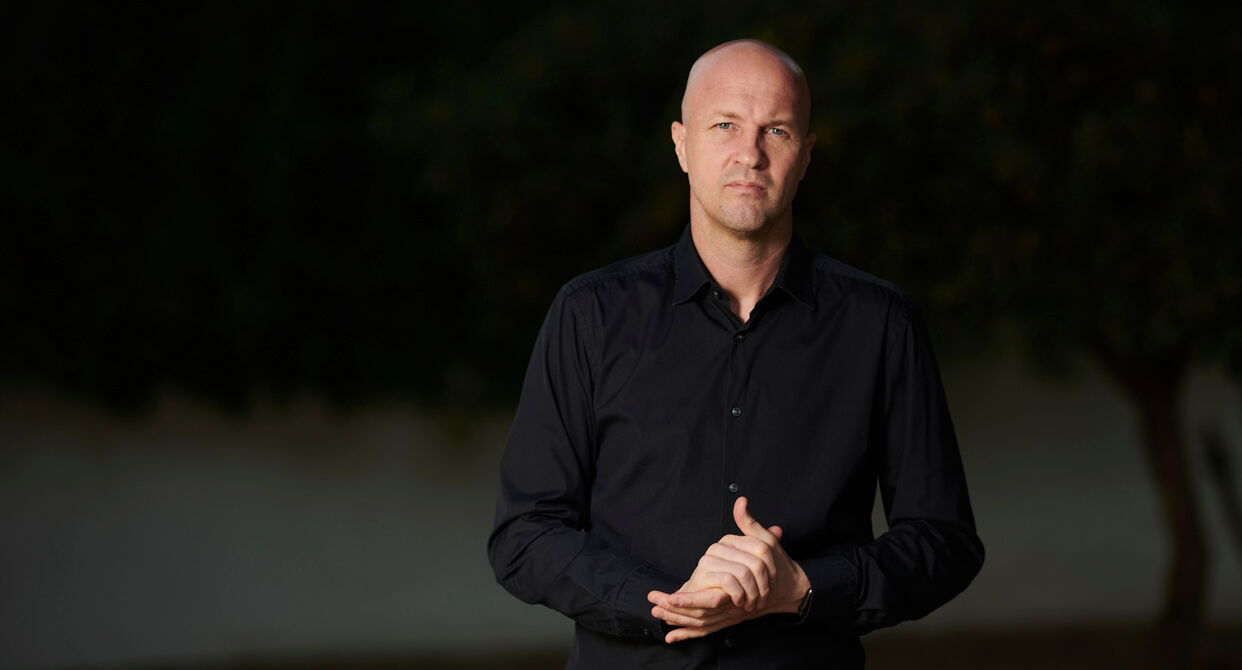 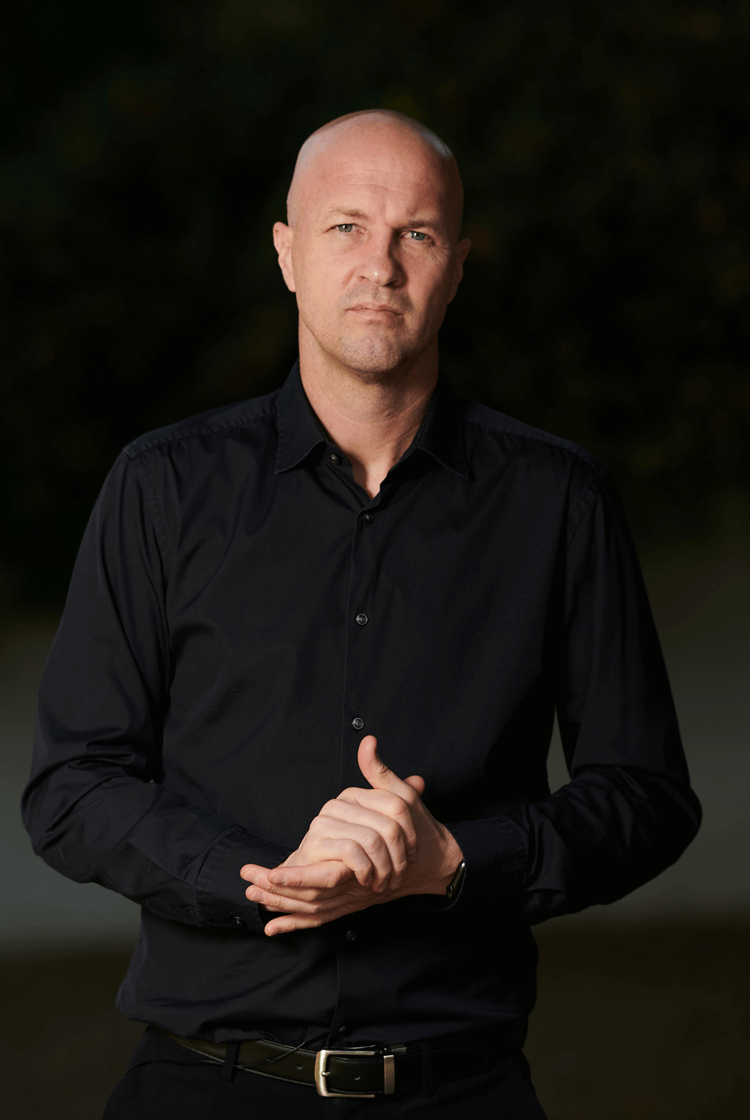 I am fortunate to be able to call on the influence of two footballing greats.

In everything I do, my father, Johan Cruyff, and Sir Alex Ferguson are both very present. Particularly when there is a man-management issue, they come to mind.

They showed me you can’t always solve two problems in the same way. You have to differentiate from player to player, from ego to ego, because everyone responds differently.

It is the same during games, when you have a decision to make – like a substitution to decide on. When I start doubting myself, I always think: “What would my father do in this moment?”

Then, when I make a decision, I go for it. Just like he did.

That conviction is really important and, for me, it comes from him.

From an early stage, I had to think about the day my football career would end.

From the age of about 30, my body started failing; my knees were going in different directions!

Lots of footballers know by the age of 32, 33 or 34 that they want to be a football coach. For me, it was slightly different.

“I love football, and I love to argue. I love being surrounded by people who don’t always agree with you”

I studied business management in case I wanted to go that way, and I did my coaching badges too.

At the age of 36, I decided to try coaching with one last adventure. I became player-assistant manager at Valletta in Malta – but I soon realised that, at that point in my life, it wasn’t for me.

I love football, and I love to argue. I love being surrounded by people who know their stuff; people who don’t always agree with you, and who have different views and strong opinions.

And so the role of sporting director suited me.

I spent two years as sporting director at AEK Larnaca in Cyprus, and then had five years at Maccabi Tel Aviv between 2012 and 2017.

I was in charge of advising and establishing the culture of the club; almost the DNA of the club, and the style of football we wanted to play. I would work with the owner to decide what we wanted the club to be.

At Tel Aviv, we knew that a coach would go to a bigger league if they did well, so we always had to be quite short-term in our thinking.

We’d try to create a quick-win culture. We also tried to buy young players and sell them on to bigger clubs.

I was always very open with the manager. I would tell them we needed short-term results and we could be a stepping stone for them.

At the same time, my job was also to think about the next stage for the club. If we had a young player who we thought could break through to the first team in six months, we didn’t want to sign a player who would block their path – especially if that player would cost us a lot of money.

I was able to oversee training, see how coaches prepared for matches, analyse the emotions of the players and how different interactions affected them. I would share my thoughts on tactics, and I would have very open dialogue with the coach.

There was a line that I was careful not to cross, though. The coach was in charge of the team, and everything to do with the footballing side of things. But when a decision affected the long-term future of the club in any way, it was time for me to step in.

There is a lack of patience in football these days, so it is impossible not to be short-term in your thinking – but it is a challenge of the sporting director to manage short, medium and long-term ambitions. It is important to find a common ground where everyone is happy.

It became really clear to me how important it is to have good staff around you. Discussion and debate are both really beneficial.

Working so closely with the owners of football clubs – people who aren’t necessarily football specialists, but who are very successful businessmen – has also taught me a great deal.  In particular, it has broadened my learning experience.

As a player, I had really wide-ranging experiences, too. I was lucky to have played for Barcelona and Manchester United – two absolute dominators, both on and off the pitch.

“The owner told me he wanted me to stay on as manager, but it wasn’t what I was looking for at the time”

We had so much quality in the squads that we were always fighting for titles, and more often than not we were winning matches.

Then I had a very different experience with Alavés (below). We were an underdog; a team that had to work on simply trying to stop the bigger teams before we could think about how we could hurt them.

If you could hold a team to 0-0, then suddenly set-pieces take on a greater importance. How can you use them to make the difference and get a result?

It was a different kind of football there – it was about protecting yourself for as long as possible – but I still really enjoyed it. And it was important for my growth to be on the other side of the game – to be on a team that suffers.

I feel the fact that I had those experiences as a player and then as a sporting director – which means I understand how clubs think, and I know about managing medium and long-term expectations – set me up for a later move back into coaching.

I had my coaching badges already, so maybe it was in the back of my mind, but I got them many years before and I wasn’t planning to go back into coaching.

It was 2017 when things weren’t working out with the manager at Maccabi Tel Aviv – former Ajax and Rangers striker Shota Arveladze. We were coming into an intense period, with eight or nine games in a matter of weeks.

The owner decided to make a change, but he didn’t want to bring someone new in who would have to adjust and settle in. So, he asked me to be manager.

It went really, really well. We won eight and drew one of my nine games in charge.

The owner told me he wanted me to stay on as manager, but it wasn’t what I was looking for at the time. We had agreed on those nine games, and that was all I was comfortable with doing. I always told myself: never replace a coach by sitting in his chair yourself. It is not the correct thing to do. It brings bad energy.

But then my replacement, Lito Vidigal, struggled – so the owner came back to me. In 2017, I agreed to do one – just one – season as manager.

I’d been in Tel Aviv for a long time. My father had passed away in 2016, so being close to my mother and my kids suddenly felt much more important. So after that year, I ended my time in Israel. I needed to be back in Barcelona to refresh.

I took some time to talk to other coaches, other sporting directors, to share ideas and talk about methods. Football keeps on changing all the time, so it’s important to stay up-to-date wherever possible.

It’s important to retain the drive to keep improving, to be open-minded and learn how others do things, how others solve problems. I had a chance to learn in my own time.

But then a call came from Chinese Super League club Chongqing, from Antonio Cordón – who was in charge of the sporting strategy of the company that owns both that club and Granada – with a very good offer. I’ve always liked the idea of taking on new, mysterious challenges, so I dived into this one too.

“I’ve always been understanding towards players, because I was a young player myself and I made mistakes”

When I arrived, it dawned on me how big a challenge this was. The team had only taken five points from a possible 27, and there was a negative dynamic around the place. I had to speak to most of the players through a translator because nobody spoke English. And I didn’t know anyone.

But I came through that challenge well. We managed to turn the season around, and that gave me huge confidence as a coach going forwards.

It led to me getting the job as Ecuador manager, which once again came through Antonio Cordón, who took up the role as the director of football at the Ecuadorian Football Association – though that was disrupted by the global pandemic and no matches took place. Then another call came from China – this time with Shenzhen FC.

I’d missed the emotion of training every day, of playing every three or four days. I loved the intensity of it. And it was another experience to learn from.

Coaching is a never-ending journey of new experiences, and I’ve loved jumping into new challenges wherever I’ve been able to. Each time there’s been a chance to learn something new, I’ve taken it.

Overall, I’ve always been keen to learn from all sides of the table. As a sporting director, I’ve always been understanding towards players, because I was a young player myself and I’ve also made mistakes. It’s good to be understanding, but you also have to protect the club’s interests. It’s not just about what you know from the grass, but also how you deal with a dressing room.

Nowadays, clubs are really looking for a manager or coaches who also know how to lead a large group of players or staff, to convince them and get them to go in the same direction. As a sporting director, there are a lot of similarities: you can create a good working environment, everyone has their own specialisation and they all follow a common goal, which is the club’s strategy.

I think my experiences as a sporting director have helped me a lot as a coach, and the coach experience could also eventually help me if I ever go back to my previous role.

Everything I’ve done has been part of the learning process. From the grass to the dressing room to  the board room, it has all helped me.

I’m not great at planning for the future. I just take life as it comes and try to learn at every opportunity. You never know where life – and football – will take you, so I always try to stay open-minded. And, especially, I try to enjoy every day.