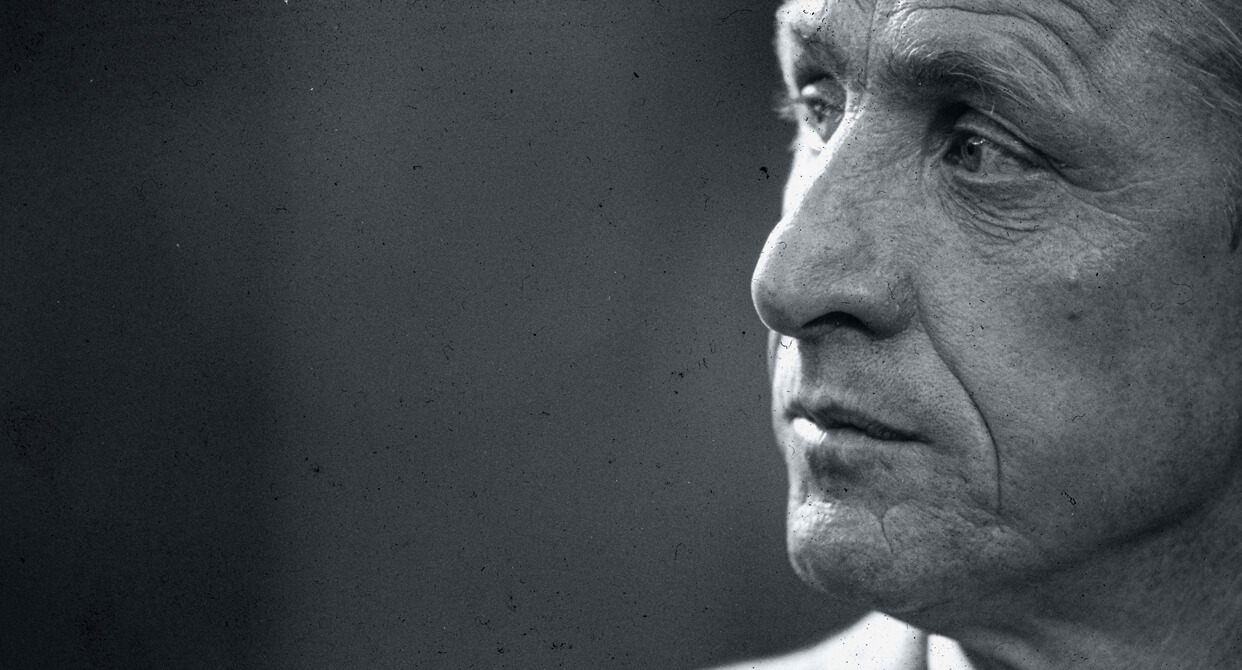 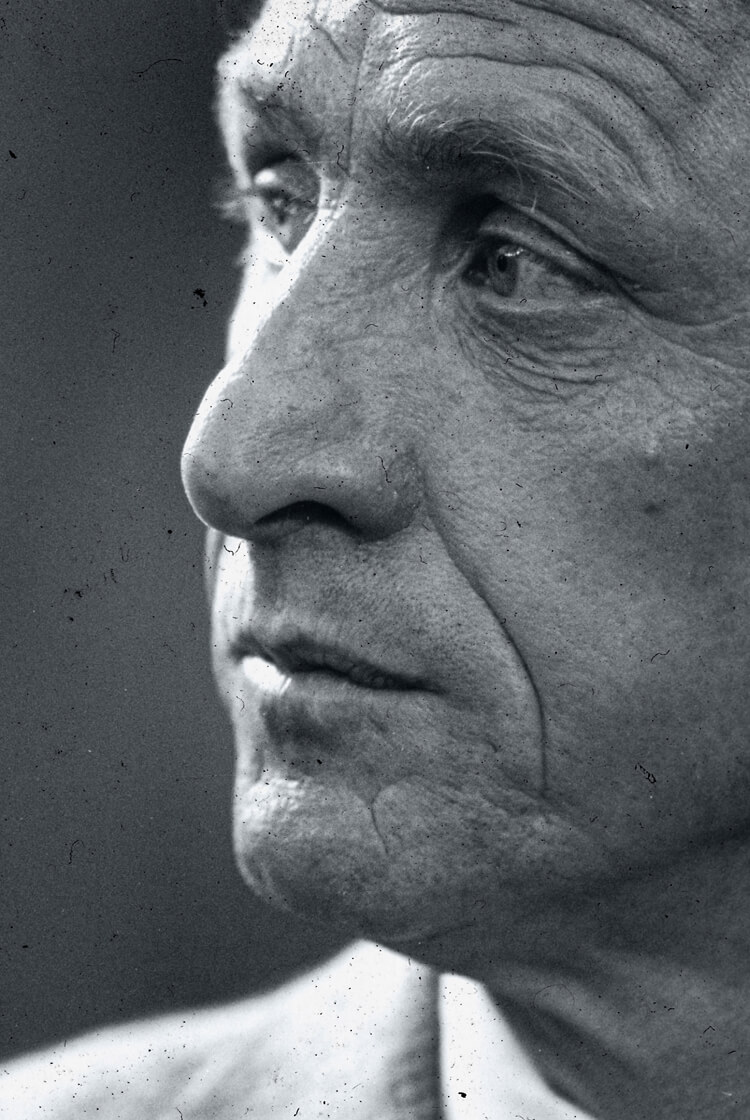 Profile
Johan Cruyff is without question one of the most influential figures in the history of football. His pedigree as a player, which includes three consecutive European Cup wins with the great Ajax team of the 1970s and a World Cup final with the Netherlands in 1974, is enough to guarantee this. But his work as a coach, characterised by an unwavering commitment to an attacking and attractive style of play, enhances his legacy even more.

Cruyff led only two teams during a little over 10 years in management: his beloved Ajax (1985-1988) and, between 1988 and 1996, Barcelona – the club at which he built a squad of serial winners that would win four consecutive Spanish league titles between 1991 and 1994, secure the 1992 European Cup and become known as the Dream Team.

His philosophy was founded on the Total Football methodology he had practised as a player in the great Dutch side of Rinus Michels (above, left). Michels had himself been influenced by another iconic team – the 1950s Hungary vintage of Ferenc Puskás and Sandor Kocsis known as the Mighty or Magical Magyars.

Possession of the ball, mobility, swapping positions and use of the entire pitch were the trademarks of Cruyff’s coaching philosophy. “Football basically consists of two things,” he said. “First, when you have the ball, you must be able to pass it properly. Second, when the ball is passed to you, you must be able to control it. If you do not control it, you cannot pass it either.”

Playing style
Cruyff was not simply a purist – his number-one priority, as with any coach at the elite level, was always to win. But he believed the best way to secure victory was through an offensive style of play through which his teams would do everything possible to dominate every game they played.

His obsession with possession led him to develop a model based on triangles: each player, regardless of his location on the pitch, had to position himself to form that geometric shape. He considered this the ideal basis from which his team could keep the ball, while always offering the ball-carrier two passing options.

It was what he called his diamond formation, but the positional football that Cruyff preached was not always easy to understand. It was possible, but only as long as his players shared his own deep understanding of the game – an understanding that enabled them to decide when to approach their teammates, and indeed when not to.

Possession of the ball by itself did not interest Cruyff. He wanted his players to understand that, in order to keep it and move towards the opponents’ goal, the ball had to be moved and moved and moved. This was the key to creating imbalances in the opposition shape and creating the spaces that would allow them to penetrate into dangerous areas.

At the same time, he wanted his team to maintain a compact block. This would allow constant exchanges of positions, and enable easier and faster reorganisaions when they lost possession. And the closer together they were, the easier regains would be even in the opposition half.

Offensive phase
It all started for Cruyff with the composition of his defence. He chose an unorthodox back three: one single central defender – Ronald Koeman or Miguel Angel Nadal – and two full-backs in Albert Ferrer and Sergi Barjuán or Juan Carlos. The full-backs, however, were expected to join the attack constantly; as a result, the defensive line was often comprised only of that single central defender and the defensive pivot – Luis Milla, Pep Guardiola or José Ramón Alexanko. None of these were players renowned for their physical attributes.

The role played by the full-backs was fundamental, however, as this allowed Cruyff to widen the pitch. Ferrer and Sergi advanced as traditional wide players down the lines, which allowed the wingers – most commonly Hristo Stoichkov and Andoni Goikoetxea – to move into more central areas and reduce their distance to Michael Laudrup in the central striker position. Echoes of this can be seen in Jürgen Klopp’s Liverpool team, in which Trent Alexander-Arnold and Andy Robertson so often provide the width that enables Sadio Mané and Mo Salah to drift into dangerous half-spaces.

This wasn’t always the case, however – Cruyff also wanted his full-backs to have the option of advancing into central areas. This didn’t just give the wide attackers more space; with Sergi and Ferrer encouraged to come inside (below), it also gave the midfield pivot more passing options nearby.

Further forward, the developing role of Laudrup – Denmark’s finest ever player – was one of Cruyff’s great innovations. His emergence in the Dutchman’s scheme involved the use of a tactical figure that had seemed long forgotten: the false nine.

On joining Barcelona in the summer of 1988, Cruyff inherited at least one traditional centre forward in the shape of Gary Lineker. But the head coach soon convinced himself that, for his philosophy to come to fruition, he needed a player with different characteristics: greater mobility and more involvement in the build-up.

This didn’t mean that the role of the central striker was totally banished – in subsequent seasons, Cruyff found room for prolific goalscorers such as Romario and Julio Salinas. The latter even started alongside Hristo Stoichkov in a front two in the 1992 European Cup final victory over Sampdoria at Wembley (bottom of page, left), with Laudrup operating behind them.

But the brilliance of his ideas came to life more with Laudrup (above) playing as a false nine in the new system – echoes of which could be seen in Barcelona two decades on, when Guardiola chose to use Lionel Messi in that same way.

Laudrup was a footballer with a fabulous sense of position. More used to passing the ball than scoring goals, he possessed the ideal virtues for the positional playing style that Cruyff so desired. The role of the false nine required Laudrup to constantly leave the centre-forward zone where he started games so he could play alongside the offensive midfielders – most often Eusebio Sacristán, Txiki Begiristain and José Mari Bakero – or with the wingers, causing confusion in opposing central defenders more accustomed to marking a traditional centre forward. The dynamic movements encouraged by the use of the false nine, and resulting imbalances in opposition defensive lines, also allowed the midfielders to more easily get into shooting positions.

The strategy designed by Cruyff had another objective: to create a numerical superiority in midfield that would help maintain possession of the ball while ensuring new variations for the triangle football. By encouraging one of his wingers or full-backs inside, he wanted his team to maintain very close passing lines, thus shortening the distance between players. He saw this as essential to achieving rapid circulation of the ball.

In situations when the opposing team played a high pressing game, goalkeeper Andoni Zubizarreta could play a medium-range pass into the defensive pivot or play long towards one of the wingers. If the ball was with Koeman, the long switch was a common tactic. The receiver could then engage one-on-one with his marker or, if he preferred, look to combine with the nearest attacking midfielder.

If opponents positioned themselves in a low block, the build-up would always start from the goalkeeper. With the ball at his feet, Zubizarreta would have the options of playing into Koeman or the midfield pivot to start building up the team’s progression. The full-backs, depending on the speed of circulation and the movement of the wingers, would, as discussed already, push on wide or make themselves available to the pivot in more central areas.

Once in the opposing half, those who were close to the ball were expected to find space and offer themselves as passing options. Players on the opposite side of the pitch were to maintain their positions, however – only in this way could the team maintain the maximum width that Cruyff demanded.

With the arrival of Romario in the summer of 1993 – Laudrup would depart for Real Madrid, controversially, one year later – the team adopted more traditional behaviours. As a centre forward, the Brazilian forced his teammates to move around his more consistent positioning. This substantially modified Cruyff’s model, providing it with a lethal player in the penalty area but limiting some of the team’s previous dynamics outside and around it.

Defensive phase
Defend by attacking. That was the essence of Cruyff’s idea, and why his inclination towards offensive play was so strong.

In situations where Barcelona did withdraw into a low block, it was possible for the defensive midfielder – Guardiola, for example – to drop and operate as a second centre-back. The full-backs would then occupy more traditional defensive positions as Cruyff’s in-possession 3-4-3 reorganised into a more familiar 4-3-3 shape off the ball.

If the team was already set up in a 4-3-3 with two centre-backs, the defensive midfielder would already be in the central areas of the pitch that were more natural to his game. This can be seen in the team Cruyff selected for the 1994 Champions League final (bottom, right) against AC Milan, with Guardiola as the deep-lying midfielder in front of Koeman and Nadal.

With the exception of the full-backs, the rest of the players in Cruyff’s system were not expected to make long horizontal or vertical movements when the team was in possession. Equally, his teams rarely executed a high or intense counter-press after losing the ball – this gave the opposition both time and space on the counter-attack, which often left Cruyff’s defensive line vulnerable on defensive transitions. It was no coincidence that his Barcelona team conceded so many goals.

His defensive strategy as a whole was based on the positioning of the players rather than any physical prowess; proof of this was the relevance that Guardiola, a technician rather than a runner, acquired as a defensive pivot. Cruyff believed that the correct positioning of his players would allow for more effective, prolonged possession and then quick recovery of the ball.

“If you don’t lose the ball in the build-up, it’s very difficult to be counter-attacked,” he once said. Of course, even his teams lost the ball sometimes – and when they did, because of the way he set up, counter-attacks were the most effective way to hurt them.

In the 3-4-3, when Guardiola dropped to adopt the role of second central marker (above), the team gained a gifted ball-player who, upon regain, joined Koeman in having the ability to smoothly play out and restart the build-up. However, this also presented a risk in a player not used to operating in the final defensive line – any mistake resulting from opposition pressing could transform almost immediately into a goalscoring opportunity.

Behind Guardiola, Koeman and co, Zubizarreta was a traditional goalkeeper not used to playing with his feet. Under pressure, he would often resort to playing long balls without a clear receiver rather than looking for the nearest teammate. Cruyff was an innovator who wanted his goalkeepers to be involved in the build-up, a genuine passing option. Zubizaretta was not that, but we can see the influence of Cruyff’s intentions in Guardiola’s own teams now – not least in the form of current Manchester City stopper Ederson, who has the passing range of an outfield player.

It is not only through Guardiola that Cruyff’s legacy endures, of course. A coach such as Marcelo Bielsa shares the same innovative spirit as the Dutchman, remaining true to his view of football as a spectacle above anything else. In Guardiola, Bielsa and others, Cruyff’s fundamental idea endures: football is and must be about scoring one more goal than your opponents.