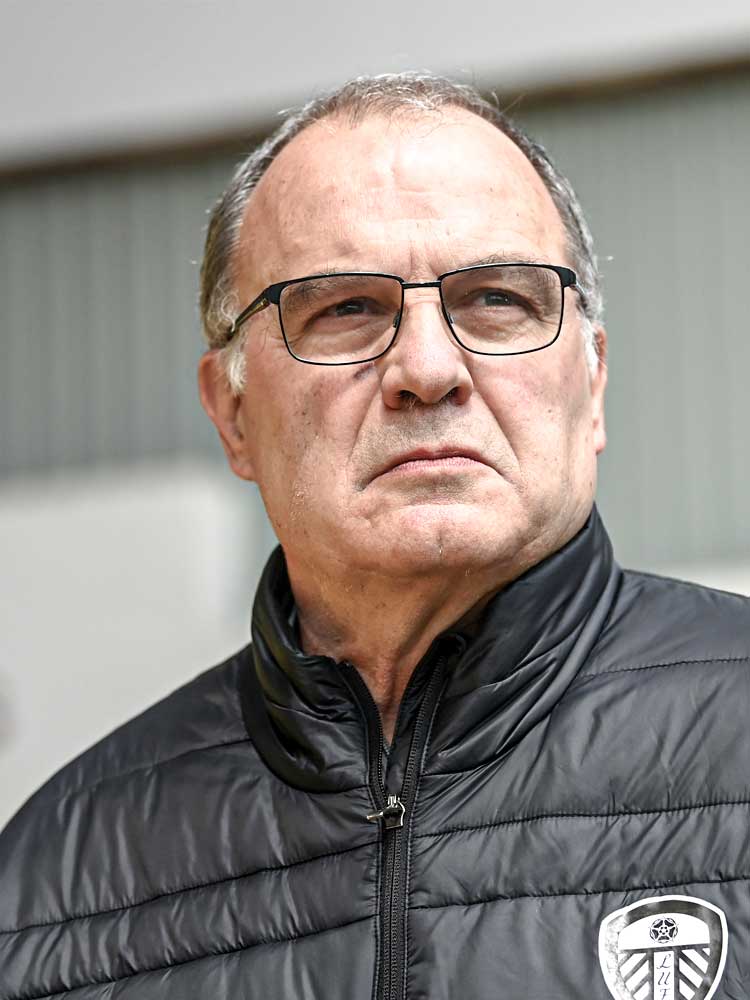 Profile
It was the iconic Marcelo Bielsa, when Leeds were pursuing a successor to Paul Heckingbottom and the latest manager tasked with ending what was then their 14-year absence from the Premier League, the club turned to when appointing their 11th manager in six years in June 2018. The Argentinian, also known as "El Loco", had led his country at the 2002 World Cup, and Chile at the same competition in 2010. He also continues to be admired as a tactical innovator, to the extent that Pep Guardiola, Mauricio Pochettino and Diego Simeone all credit him with having a significant influence on their careers, having previously managed clubs in Spain, France and Italy, won Olympic gold with Argentina in 2004, and inspired Athletic Bilbao to the Europa League final in 2013.

“My admiration for Marcelo Bielsa is huge,” said Guardiola, who observed his methods in 2006, before becoming Barcelona’s manager. “He makes the players much, much better and he helped me a lot with his advice.”

Playing style
Rotations from a midfield three – when attacking from a high-tempo, 4-3-3 formation (below) – are a regular feature of Bielsa’s teams. Many opponents attempt to defend conservatively against them, and then to retreat into a mid-or-lower block; in a similar way to the team he oversaw at Bilbao, the rehearsed movements Bielsa encourages create passing lanes with depth, in an attempt to draw opponents towards them.

Those movements invite individuals to receive possession on the blindside of opposing players, but, if forward passes remain difficult, the ball will be circulated in defence and with the single pivot at the base of midfield until an opportunity appears. Central defenders also occasionally advance into midfield, in an attempt to draw an opponent out of position and free up a teammate. Midfielders, similarly, rotate into defensive midfield spaces, particularly against opponents employing a tight, man-marking system, and in more advanced central territory, Bielsa’s runners move to overcome the efforts of an opposing single or double pivot.

A further consistent feature of his teams is their use of a third-man runner (below) – something that became common while he was Bilbao’s manager – against teams defending with a narrow shape. When trying to penetrate into the attacking half, subtle movements away from the ball carrier and a further run from a wide position beyond the opposing defence become their method of attack. Possession-based teams regularly favour runs in central territory; one of Bielsa’s teams is likely to offer a run from an overlapping full-back while a 3-3-1-3 shape is temporarily adopted.

Through wide players drifting into the inside channels, spaces are created for full-backs to advance into. The defensive midfielder – at Leeds, often Kalvin Phillips – withdraws to a position between the two central defenders while two further central midfielders and the two wide players rotate to offer passing options in front of the new back three. Bielsa’s preference for increased passing options between the lines is complemented by overlapping full-backs, forcing opponents into applying a narrower press. It is the timing of those impressively-orchestrated attacking patterns, perhaps beyond anything else, that demonstrate the influence of Bielsa's training methods and his understanding of the game. Guardiola’s Manchester City have been known to offer similar movements, particularly when attempting to create combinations in wide areas against a lower block.

Leeds’ two wide midfielders join the striker while two attacking central midfielders mean that those attacking from wide areas have several potential targets; the striker can also remain advanced because of the four rotating around him. When the striker is required to withdraw to either link play or to receive possession in the inside channels – essentially offering a further option when even those rotating are struggling to break down a resilient lower block – Leeds’ midfielders provide runs in the inside channels around Patrick Bamford to add to their goalscoring threat (below).

Ezgjan Alioski, Luke Ayling, and Stuart Dallas have also made similar contributions after attacking from wider positions. The reality, regardless, remains that Bielsa’s preference for having several players positioned to finish an attack, instead of the more traditional method of relying on a potent goalscorer to do so, may be costing them goals.

Little has changed about his methods since their promotion to the Premier League. A rare 3-3-1-3 (below) has complemented his long-favoured 4-3-3. Phillips continues to withdraw to between or around their central defenders, their full-backs continue to make regular forward runs to contribute support through the inside channels, mostly via one-twos and third-man runs, and Harrison, Hélder Costa, and Raphinha encourage them to do so by retaining their width before eventually attacking infield in the final third.

They also consistently use two attacking midfielders who are instructed to support inside of their wide players and to assist their full-backs via combinations – the versatile Dallas and Mateusz Klich, and the more offensive Rodrigo and Tyler Roberts, have all been effective at doing from behind Bamford as the striker drifts across opposing defences. By one central midfielder advancing higher to occupy, with Bamford, both opposing central defenders, there are also occasions when their wide players can attack one-on-one, and when combinations with their full-backs are supported by an additional player around the ball. Bamford complements that by drifting away to invite that midfielder to continue to advance and by supporting wider combinations when play is switched. Movements are also made in the defensive half to assist with building play there – Phillips, particularly, moves to create space for those in central midfield to rotate as they withdraw and attempt to combine around higher pressure.

Pressing and defending
Bielsa prefers his teams to defend and press high, and to apply a press that encourages them to regain possession, instead of one that attempts to delay opponents via more routine pressure. Though it often succeeds, it also demands particularly impressive conditioning which, over the course of a season, has often eventually proved difficult for his teams to maintain. Leeds typically press with a 4-1-4-1 that comfortably shifts from, and into, their 4-3-3; the numbers they are prepared to defend with provide cover against opponents playing directly; if possession is lost in the attacking half the numbers that have been committed to those attacks mean that they are in a position to press instead of needing to retreat into a deeper block.

They ultimately defend with the same energy and intensity with which they press. Bielsa’s man-marking system demands that, excluding one central defender (below), each outfielder aggressively tracks their opponent, regardless of how far they travel from their starting position. The spare central defender retains his position to contribute, when required, to the creation of an overload; Bamford, by extension, is therefore regularly underloaded, but focuses on pressing the in-possession opposing central defender while blocking access to the other. He also presses them from behind after adopting screening roles to prevent the opposing defensive midfielder from building play, and responds to central defenders carrying the ball out of defence by bending his runs to block the central areas of the pitch and to either force the ball wide or to make a direct regain. Those in central midfield support by aggressively marking their direct opponents and attempting to limit access into the free central defender before working to follow their opponents and potentially make regains via individual duels.

Should they instead encounter a back three, Leeds’ man-marking system is retained, but often complemented by a full-back moving infield to increase the pressure they are capable of applying in the centre of the pitch and to encourage their most advanced central midfielder to join Bamford in pressing their opposing central defenders or defensive midfielders. The principle of retaining an overload in the defensive third, and pressing with an underload in the final third, is preserved.

Their success is regardless reliant on the outcome of defensive duels, a high level of concentration, and the ability to track and challenge runners. Wide players are required to follow their opposing full-backs, and potentially to the point of defending from deeper territory than their defensive teammates, and the spare central defender organises those in the centre so that they continue to man-mark in their defensive half. It is when a one-on-one goes against them that they can become vulnerable, because it can mean those closest to the ball having to risk leaving their opponent.

Should one do so prematurely, a passing option exists; should one do so too late, the in-possession player can instead continue to carry the ball forwards. Intelligence is also required to determine which opponents no longer pose a threat – most commonly those behind the ball – and can potentially be left unmarked so that other spaces can be covered. Phillips’ role as their defensive midfielder cannot be overlooked. Through Leeds establishing an overload in central defence (above), he can advance to delay attacks, in the knowledge that the spare central defender can take responsibility for his opponent and that their full-backs and other central midfielders will often adopt a narrower shape to reduce the spaces around the ball and to provide cover.

Leeds’ press is perhaps the hallmark of Bielsa’s management – and unquestionably similar to that applied by Bilbao while he remained in La Liga. His players’ commitment to it – their willingness to hunt for possession, and to recover a position that contributes to denying an opposing counter-attack, particularly impresses. Intensity alone will rarely succeed, particularly against more complete opponents, so the intelligence to block passing lanes while pressing is also essential and can often involve preparing a trap that leads to a pass being intercepted.