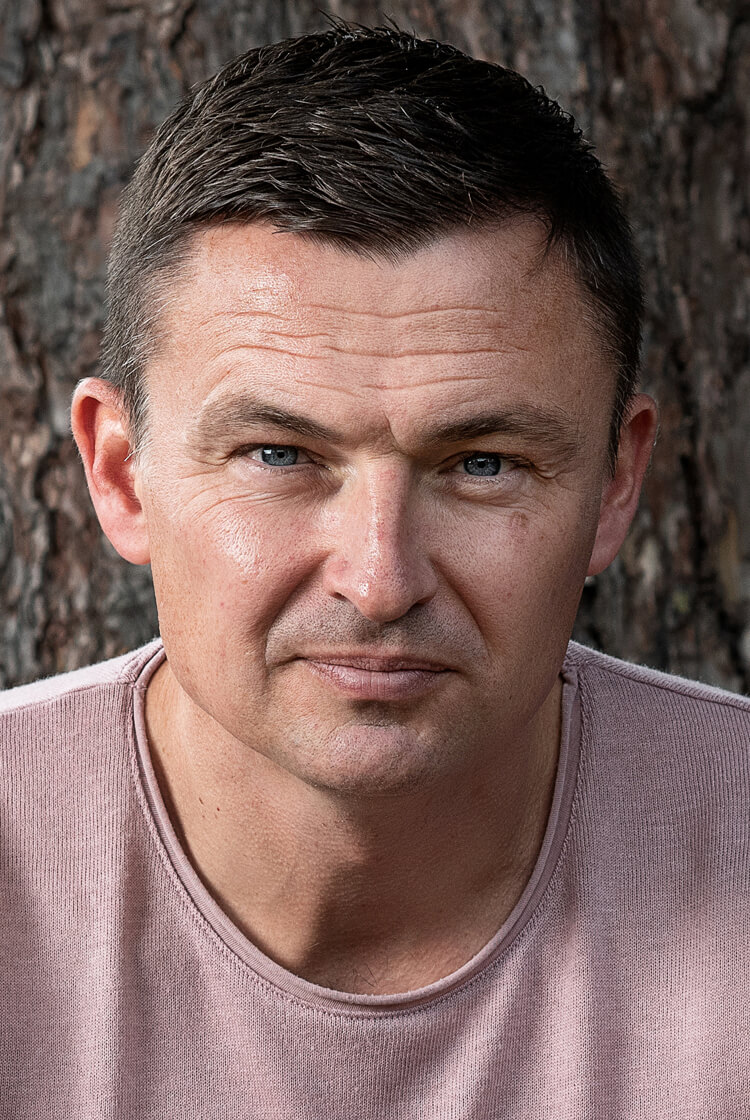 One where you’ve known for a year that the marriage was done, so by the time you leave you’ve lost all emotional attachment. Suddenly it’s not so hard to walk away, because you know it’s the right thing to do.

I’d reached the point where, whoever it was, the next club that offered me a way out, I was taking it. I even thought about walking out and handing my notice in anyway. It felt pointless me being there.

Barnsley is my hometown club. I’d grown up watching them with my grandad every weekend.

It’s the club I played for, and the club that gave me my first dream job, coaching the under-18s.

But this is football – an industry where change is the one constant. It’s something I experienced as a player, going into new dressing rooms every season or two. Seeing managers come and go. It’s something you get used to.

I could never have imagined just how much my relationship with Barnsley would change, though. I don’t mean in terms of my feelings towards the club or the fans, but my working relationship. As my values became more and more compromised, this became impossible.

By the time I started working there, coaching the under-18s, I’d racked up thousands of hours on the grass – coaching part-time at Barnsley College and Barnsley Academy. I’d achieved all my FA coaching qualifications and been to university, leaving with a degree and Masters in Sports Coaching.

So, when I started to move up the age groups at Barnsley, it felt like a natural progression.

I went from the under-18s to taking the 21s and eventually working with the first team – sitting in the dugout on a couple of occasions as caretaker manager.

Working with the first team was when I first started to think about the running of a football club. How the most successful ones have everything aligned all the way through.

"I’d been working for those players for years. I knew every one"

I was there when Barnsley dropped out of the Championship into League One. Saw managers come and go. Spent two years ingrained in all the decisions that were made around that team.

Then, suddenly, the job was mine.

I’d heard that Lee Johnson – the manager I’d spent a year working with – was leaving. He hadn't said anything to me, but it’s football. You hear things.

It was after the semi final of the 2016 Johnstone’s Paint Trophy that he told everyone. In two months’ time, we’d be going to Wembley to play the final. Now we knew that Lee wouldn’t be taking us there.

Everything happened really quickly after that. I was the man making the decisions. Picking the team. Responsible for everything.

I hadn’t realised how important it was at the time, but I’d been working with those players for years. I knew every one of them, and they knew I had their back. That made it easier for me to step into the role of caretaker manager, because there was already a connection. They knew what I expected – the way I worked – and they knew they could trust me.

A few days after Lee left, we had a game against Bury. It would be so important to win that and make sure we carried on the form that had got us six wins out of our last six in the league.

We did – 3-0. Even though I didn’t know how long I was going to be in the job, from then on, every decision I made was about doing what was right for the club – not for the next game, but long-term.

Because I think that’s your job.

A few months later, the club asked me to take the role on a permanent basis. I said I would think about it. At that point I still wasn’t sure if management was for me – and, more importantly, whether the club was capable of being successful.

Remember, I knew all about the club and how it was run. The good and the bad.

"That was the first time it really hit me. This is a big deal"

As soon as you step into the role of manager and pop your head above that parapet, your life changes. You’ve got to be responsible for everyone. You can be in and out of work in a matter of months. It can affect your family.

I had to be ready. To know that’s what I wanted to do, and that my family understood.

I knew one thing for sure, though. If we got promoted, there was no way I wasn’t doing it.

That hadn’t looked likely in December, when we were bottom of the table. But we’d become a tougher, stronger team since then. We’d always had good players, but instead of just wanting to look good we’d become really effective. We were a much better team out of possession, comfortable keeping it, strong at set-plays and a real threat on the counter. The players were becoming really comfortable in their roles.

By March, we were fighting for a playoff spot.

I remember the exact game where I started to believe. We beat Coventry – who had been up near the top all season – at home, to move into seventh. Then you’re thinking: 'Why can’t we?'

I could see it in the players, too. There was an edge to us. They were desperate to get into the Championship. We’d given them little reminders now and then to keep them on track – like showing them stadiums of Championship clubs as opposed to the ones we were playing in.

In the midst of battling for that playoff place, we had that trip to Wembley for the final of the Johnstone’s Paint Trophy.

When I picked up my phone that morning, everyone was going mad. I had so many messages from friends; family; people I’d gone to Oakwell with to watch Barnsley as a kid.

I’m reading them thinking: 'Wow, yeah. This is a big deal.'

I think that was the first time it really hit me. I was managing Barnsley.

"We talked about having the players on a leash, and about holding them all back. We didn’t want them to go too early"

It’s a unique thing – managing the club you grew up supporting. I remember speaking to Steve Cotterill about it once. He asked how I was finding it, because he had done it with Cheltenham and said it was unbelievable.

I knew what he meant. Especially when we got promoted later that season. It was a special moment. One I’ll never forget.

It wasn’t until I left that I realised how different the job is when it’s not your hometown club. Being a manager is 24/7. It’s all-consuming. Later, when I left work for the day, it felt like I was putting the job down and coming home.

I never felt I could get that at Barnsley, because everywhere I went I was on show. I was at work. Everyone knew I was a fan, and had played for and coached at the club. So everyone felt like they had a piece of me. At times, it can start to feel a bit claustrophobic.

When you’re manager of a different club, there’s a bit more distance. You still want to win. You do the job exactly the same. But I felt a lot more responsible for Barnsley because it’s not just the club – it’s the people as well.

It was strange leading the team out for the League Trophy final at Wembley. Lee had managed them through all of the previous rounds, so I felt a bit of an imposter.

Winning that trophy was so important to the rest of our season, though. Not only because of the lift it gave the team, but also because they got to experience playing in a big game at Wembley.

Five weeks later, we were back at Wembley for the playoff final against Millwall.

I’d seen the occasion get to a few of the players in the Johnstone’s Paint final. This time, there was none of that. We’d been there before; knew what it took to win. All I had to say to the players before kick-off was: “Don’t let this opportunity pass you by.”

In the build-up to the game we’d been on such a strong run of form; we talked about having the players on a leash. Holding them back and holding them back. We didn’t want them to go too early.

So, on the day, it was – bang. They were straight out of the traps.

When the third goal went in, I almost dived into the Barnsley fans sat to our right. That day is one I’ll never forget.

"If a club is run perfectly, it doesn’t matter quite so much who’s in charge, really, as long as the club is making good decisions"

That summer was a big learning curve for me.

We were really strict in terms of who we were recruiting. Under 24 and hungry, from the leagues below.

I learned that if you’re being that narrow in what you’re looking for, you have to work fast. There might only be three players in that bracket who are suitable. We have to get them. You can’t be losing that player over £100k, or £500 a week.

Otherwise you find yourself paying even more for a player who wasn’t even on the list – or, worse still, one who fell outside of the initial parameters. I struggled to get my head around that. I still do.

That was my takeaway for the club that summer. We couldn’t let it happen again.

It comes down to the running of a club, and what it takes to be successful. Yes, you need a good head coach or manager. But if a club is run perfectly, it doesn’t matter quite so much who’s in charge, really, as long as the club is making good decisions.

A few months in to our first season back in the Championship, I understood more about the consequences of that not happening.

We hadn’t renegotiated contracts with the players early enough, so come January the club was scared we were going to lose them on free transfers at the end of the year. It was like a firesale. Goals went; assists went.

We lost four of the starting XI in January, with another four wanting to leave.

It was tough. But I was proud of how we worked through that period, and I include the players who wanted away in that, too. They handled themselves well during a challenging time.

We said we were going to learn from it, but we didn’t really. We kept making similar mistakes.

As a manager, you’re the one who has to front everyone up. Whether it’s your decision or not, you have to make out like it’s the right one – especially when it affects players and dressing rooms, because they’ve got to believe in you. They’ve got to follow you.

We finished 14th in the Championship that season. It felt like we’d taken one step forward and two steps back. We needed to get to the point where we weren’t taking any steps back – we had to learn from all the mistakes.

But then you start to feel like it’s happening all over again and you’re not being listened to. You wonder: 'What’s the point?'

Things I was told, the reasons I’d stayed – it’s a principle thing. Signings were being made without me even knowing.

I couldn’t have that. Otherwise you just become a puppet.

Ultimately, you have to be happy with yourself. I loved every minute of my time as Barnsley manager and learned a great deal from everyone involved. For that, I’m extremely grateful.

It should have been hard for me to walk away, but it wasn’t. That’s how I knew it was the right time to go.

Sometimes change is the only option.