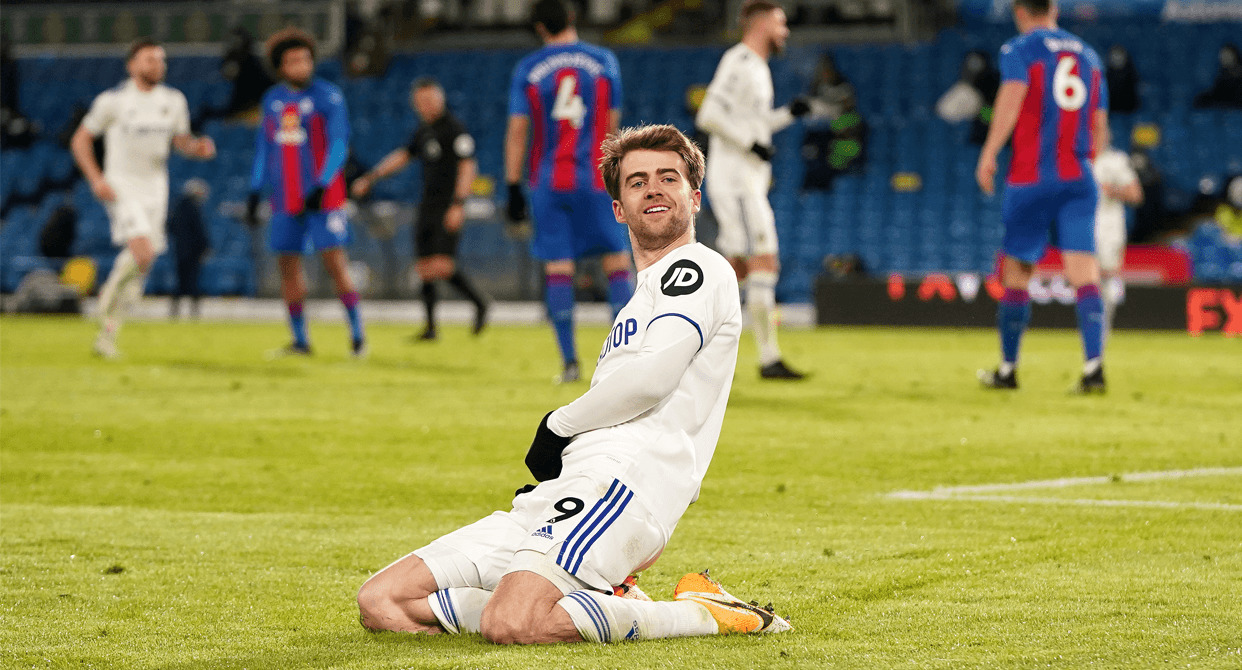 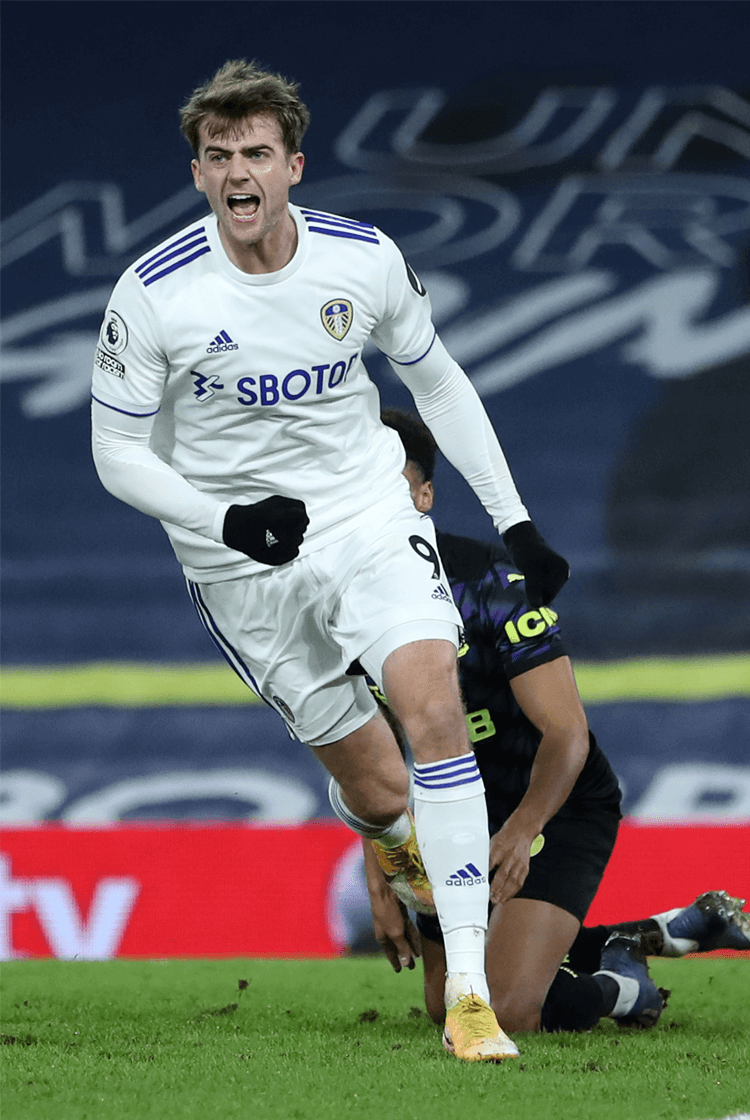 Profile
As a younger striker, Patrick Bamford struggled to establish himself in the Premier League with Chelsea, Crystal Palace, Norwich and Burnley. Under the influential Marcelo Bielsa, however, Bamford is playing his best football for a manager who has previously worked with Gabriel Batistuta, Hernan Crespo, Alexis Sánchez and Fernando Llorente. Bamford scored 16 times in 47 appearances during 2019/20, when Leeds were in the Championship, and as such he was expected to struggle in the Premier League. In their opening six fixtures of 2020/21, however, he scored six times – producing his finest form at the age of 27, and to the extent he has since scored his 100th goal as a professional.

"I'm very happy for Patrick because he scored some wonderful goals," Bielsa said of his improving striker, who in that run of six goals recorded the club's first hat-trick in the Premier League since Mark Viduka's at Charlton in April 2003. "Apart from that, he is a noble player who sacrifices a lot for the team; generous also. His development is more to do with him and less to do with me."

Tactical analysis
Bamford is a particularly versatile number nine who is as capable of operating inside of the penalty area as he is elsewhere, even if he provides his greatest goalscoring threat with his left foot and from close range. If he is also effective at scoring with his right foot and his head, he provides a consistent threat because of his movements towards goal and around or between opposing central defenders, and his ability to drift away from his marker and face the relevant goal for as long as possible. Though he lacks the speed of Jamie Vardy, a striker who prioritise similar runs, his ability to detect spaces and then receive possession often compensates, inviting him to shoot quickly and often with his first touch before opponents can adjust.

He favours shooting with the inside of his foot (below), and placing his finishes, but with a degree of power that doesn't sacrifice his accuracy as he aims towards the near post or across the opposing goalkeeper. He is also particularly aware of what is unfolding around him in the final third and in the area, and therefore remains alert and prepared to pounce on rebounds or to be influential in the attack's second phase and at set-pieces, when he prioritises advancing into the six-yard box.

When outside of the penalty area Bamford relishes moving with freedom away from the central lane to contribute towards building play in deeper and wider areas, locating new spaces, and combining and passing on the move; if he is required further forwards when play is being built, he will instead make runs across the opposing defence to receive. His efforts mean he can continue to convincingly progress play, even if doing so involves him drifting from the positions he most relishes; it is that same willingness to prioritise his team's needs that those around him admire.

There are also occasions when that enthusiasm can prove a weakness, when his teammates would have preferred him to hold his position instead of making a run, potentially contributing to them conceding possession. Similarly, for all of his willingness to press with aggression after losses of possession, the positions he adopts mean he is regularly underloaded and will therefore struggle to make tackles or interceptions, and is instead likelier to make regains by collecting loose balls. If both traits can be improved, and he complements doing so by more convincingly competing in the air, he can become significantly more complete.

Role at Leeds
Bamford operates almost exclusively as Bielsa’s centre-forward in what most closely resembles a 4-3-3 or 4-1-4-1 structure, but he is far more than just a striker for them. Bielsa sets his team up to attack in a fluid manner, and Bamford’s movements (below) are important to their attacking shape. He works back all over the pitch, and his goals are a direct result of him pushing up high to meet the end of a move. The vast majority of his goals for Leeds have been scored from inside of the penalty area.

Bamford benefits greatly from the fluidity of the movements around him; their advancing number eights are particularly key. The attacking impetus provided by, particularly, Tyler Roberts, Mateusz Klich and Pablo Hernández encourages him to move away from his direct opponent in the pursuit of space. He often makes runs in behind, even when space is limited, and he is an adept first-time finisher who is able to take shots effectively when he doesn’t have time to set himself. Their attacking central midfielders operate closely to him, and often provide Bamford with shooting opportunities as he drifts away from his direct opponent. Their intention is to provide him with simple passes that he can attempt to wrap his foot around to generate more power.

Bielsa similarly demands that both wingers and full-backs also penetrate through the inside channels, when possible, but for the most part they provide penetrations around the opposition's defence, increasng his team's presence in advanced territory (below) and creating more chaos that Bamford can take advantage of under reduced pressure. In Luke Ayling, Stuart Dallas, Hélder Costa, Ezgjan Alioski and Jack Harrison, Leeds have numerous players who attack the spaces beyond their opposing full-back in an attempt to draw central defenders away from a central position towards the ball. Given Bamford isn’t particularly strong, them doing so increases his chances of finding spaces in the area. His headed goals are almost always the result of him positioning himself in space, rather than outjumping an opponent.

Bamford’s off-the-ball contributions are a key component of Bielsa’s philosophy, and particularly important when his side are in possession. Bielsa wants his attacking players pushing forward in search of a goal, even when they are already ahead – as was seen with Leeds three goals up against Aston Villa, when so many players advanced with intent deep into injury time. Bamford’s movements help create space for those runners.

Crucially, Bielsa’s team is effective both during prolonged periods of possession and during transitional moments. Bamford’s goals are evenly split between normal play and counter-attacking situations.

With so many players bursting forwards during counter-attacks – often covering all five vertical lanes on the pitch – Bamford can slightly drift away from his marker but still remain in a central position and close to goal. He is therefore usually best placed to pounce on rebounds and loose balls after an effort on goal.