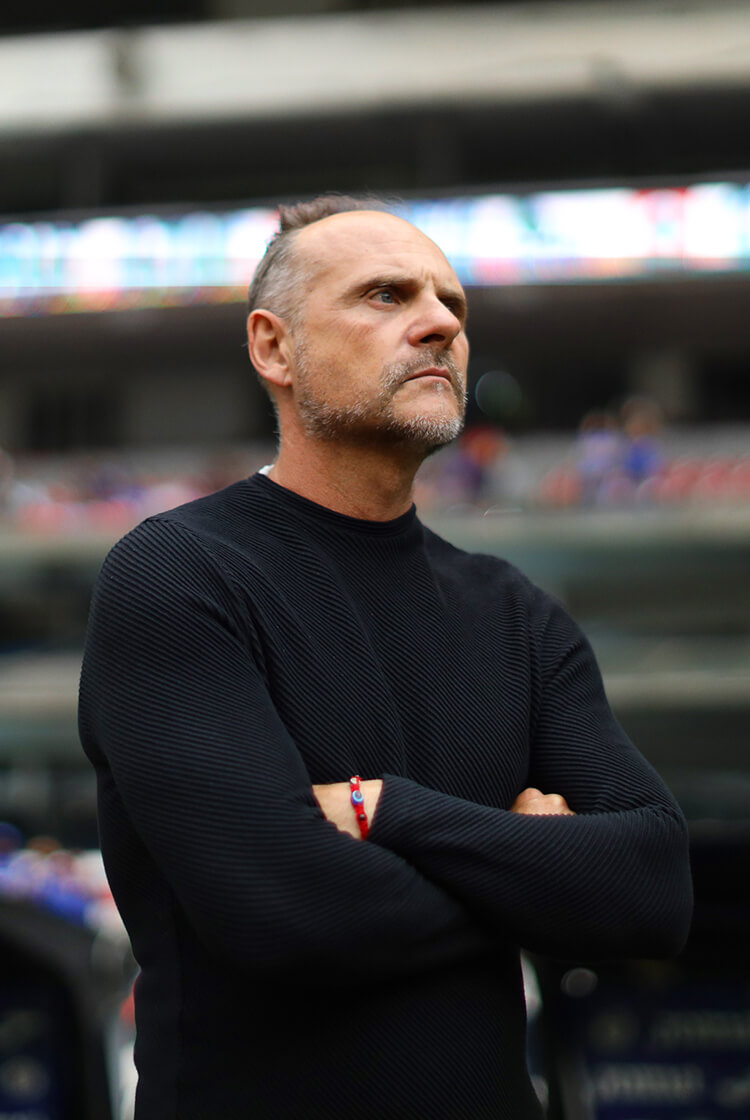 I thought I knew about football when I started working with Marcelo Bielsa.

But it took just two weeks alongside him to realise that there was a new world beyond, in which I could develop and learn.

My pilgrimage with Bielsa started in 1996, although the story goes back some years before then, when he was in charge at Newell’s Old Boys.

During that spell in Argentina, a friend of mine, Claudio Vivas, did some work for him – and he asked me to be involved too. At the time I was the physical trainer for Newell’s lower divisions, who were managed by Jorge Bernardo Griffa.

Then Marcelo went to Atlas in Mexico in 1993, and in 1994 he took Claudio with him. That was just the beginning because, two years later, one of the physical trainers in the lower divisions left. Marcelo, by then sporting director, asked who could replace him – and my name came up.

In our first conversation, there was considerable admiration on my part for his working methods – and great respect for his spell at Newell’s, where he brought great joy to us fans. Marcelo has such a distinct style.

From the outside, that’s why a lot of fans follow his idea – they feel as though they identify with it. Most end up being 'Bielsistas'. Even during his spell with clubs in Argentina, opposing fans showed respect for what his teams tried to do.

"Marcelo ended up with 500 drills to develop different players"

There are so many details that make him different, but maybe above all else is the fact that he is an extraordinary creator of training exercises that improve players.

He also creates them through a very particular and thorough analysis of matches and of players. He can absorb all of the action, then home in on just one aspect and transform it into an exercise.

From that tiny part of the game, he is capable of developing a drill that replicates it, and improves it so that players can execute it in a match.

Marcelo actually developed a programme of about 30 types of one-two, and he shaped them into drills to use in training. To all of those tasks that he had previously designed, others were added to the recruitment and training programme for players he developed in the lower categories at Atlas.

"We really enjoyed those six years in charge of Argentina"

We ended up with close to 500 drills, which gave us the chance to develop different players in different scenarios more easily. Youngsters emerged from that time who were pivotal to Mexico’s national team – Pável Pardo, Jared Borgetti, Juan Pablo Rodríguez, Rafael Márquez (below) and Daniel Osorno.

Later, while with the Argentina national team, Marcelo had created another wonderful drill. But he told me something about that period in Mexico.

“Do you realise that I used to create three drills a day?” he said. “Now it’s three a year. One every four months. But each drill goes into such a minute degree of detail that when we take it on to the pitch, the players pick it up perfectly – and very quickly.”

After Atlas I went with him to his next teams. In June 1997 we came back to Argentina with Velez Sarsfield, and in 1998 we went to La Liga with Espanyol. We had only been in Barcelona for four months when the call came from the Argentinian Football Association, offering him the job of manager of the national team.

"The youngest players went on to win Olympic gold in 2004"

It was very exciting for Marcelo.

Those were six years that we really enjoyed. There were some great, happy times, but also bitterness.

Under Marcelo, there were two different national teams. The first (below), between 1998 and 2002, was more direct, winning a lot of matches before the 2002 World Cup. That team played brilliantly and had a very high peak performance during the qualifiers.

But players have cycles and, by the time we got to the World Cup, not all of them were at the same level they had been at in the run-up to that tournament. We were eliminated at the group stages.

"At first, people were expecting to see the Bielsa stamp on me"

Then a new team was built, from 2003 to 2004, when players were replaced. Even though the idea remained consistent, the style of play was less direct and involved more of a link-up game. That second team had an extraordinary Copa America, ending as runners-up to Brazil. Its youngest players then went on to win both the pre-Olympic tournament and then the gold medal at the 2004 Olympics in Athens.

When the Argentina job ended, Marcelo decided to take a break – but we carried on working to set up a coaching staff for future opportunities.

In June 2007, Cerro Porteño – a club in Paraguay – asked me to be their manager. In my coaching career, I had never before had that role. It was hugely exciting, but before taking any decision I had a conversation with Marcelo.

Afterwards, I left convinced of taking the next step.

The first few days, people were expecting to see something similar to what Marcelo promotes. The 'Bielsa stamp', like is said about all of us who have worked with him.

In football, though, you can’t coach using someone else’s little book. In the end, copies don’t work.

That doesn’t mean to say there aren’t things I do in a similar way to Marcelo, but in others I distance myself because my characteristics are different. It would be an enormous lack of respect on my part to want to compare myself with Marcelo. You just have to look at where he has got to and what he has achieved.

Little by little, I started to make my own name in Cerro Porteño, with my own ideas. That team had a brilliant style of playing, built on a 4-3-3 formation – it was very attacking, and free-scoring. We ended up finishing in second place.

During the years that followed I carried on developing. I managed Club Libertad, also in Paraguay, then Cerro Porteño again, Newell’s old Boys, Paraguay’s Nacional, and Cobreloa in Chile. All of those teams gave me the opportunity to compete for titles, and manage in both the Copa Libertadores and Copa Sudamericana.

My path as a manager was established when, suddenly in 2014, the opportunity to again work with Marcelo arose – this time at Olympique Marseille.

Our relationship was, obviously, not the same as during our first spell together. Since then I had been in charge of many matches as a first-team manager. But there was something that always stayed the same – my support for his ideas, and my desire to ensure the team performed on the pitch as Marcelo intended.

Internally, there could be a discussion or a conversation about what was the right way to reach that objective. But, once the manager makes his decision, the message to the player has to be aligned with what he thinks. That is not negotiable.

"The time in Marseille helped me to reconnect with Marcelo"

During that spell at Marseille, I worked very closely with the players. It was a task that Luis Bonini had performed very well as part of Marcelo’s coaching staff at Espanyol, and then with Argentina, Chile and Athletic Bilbao.

But Bonini had left to follow his own path, and I had to take on that role at Marseille. Someone who helped a lot with that in the dressing room was Franck Passi (below), another of the assistants who was part of Marcelo’s coaching staff.

Passi had been a player with Marseille and had also played in Spain and England. He spoke three languages perfectly, and that allowed him to communicate with all of the players there. Between him, my brother Diego Torrente – who was also part of the coaching staff – and myself, we tried to unite the squad to achieve collective goals.

That was a lovely role that helped me to learn more French, exchange ideas with great players, and get to know a new league. It also helped me to reconnect with Marcelo, and his style as someone who comes up with enduring ideas.

The surroundings of an amazing working environment, with assistants like Diego Reyes, Pablo Quiroga (below) and the great facilities of the level Marseille had, forces you to evolve constantly and learn new things.

I might have had some doubts at the beginning about going back to the job of assistant coach. “Is it a step backwards?” I wondered. But it turned out to be the opposite. That year in Marseille ended up being a real boost.

Then I went back to being first-team manager in Colombia with Once Caldas from Manizales. I was there for 15 months. I made huge changes in the first six months, but we got to the semi finals of the Colombian Cup and ended the season fifth in the table.

Then I had a call from Mexico to be in charge of León for a year. I took them from near the bottom of the table to getting to the semi finals of the Mexican League.

"After a very tough, exhausting six months, I needed a break"

In June 2018, Everton from Chile hired us for a big challenge. They only had nine points and everybody thought they were going down.

It was a very complicated situation, but the type I’d had to deal with several times before. I am a manager who normally takes charge of a club at a time of crisis. The previous manager is having a hard time, and they decide to make a change.

At that moment of crisis, the team has already been assembled. There is no way to bring in the players you want. You just have to try to get through with the players you have. That’s what we did – we stayed up by getting 25 points out of a possible 45.

After a very tough, exhausting six months, I needed a break, so I had a frank conversation with the chairman. “If the team is in trouble again, I am willing to come back,” I told him.

"Managers are there to find solutions, not to explain defeats"

After spending six months in Mexico with Morelia I am back with Everton again, keeping the promise I had made at the end of 2018.

Beyond the paperwork, agreements or signatures, I try to keep my word. I think that’s the way to build confidence.

The objective is the same again. As I always say – us managers are there to find solutions, not to explain defeats.

In the beginning I was more rigid in my way of thinking, but as time has passed I have understood that there are certain players for certain objectives, and others for different ones. The important thing is to achieve aims with each player, and ones that are within his reach.

It’s all about making positive changes that allow players to get better.

At the end of the day, that is the art of coaching.