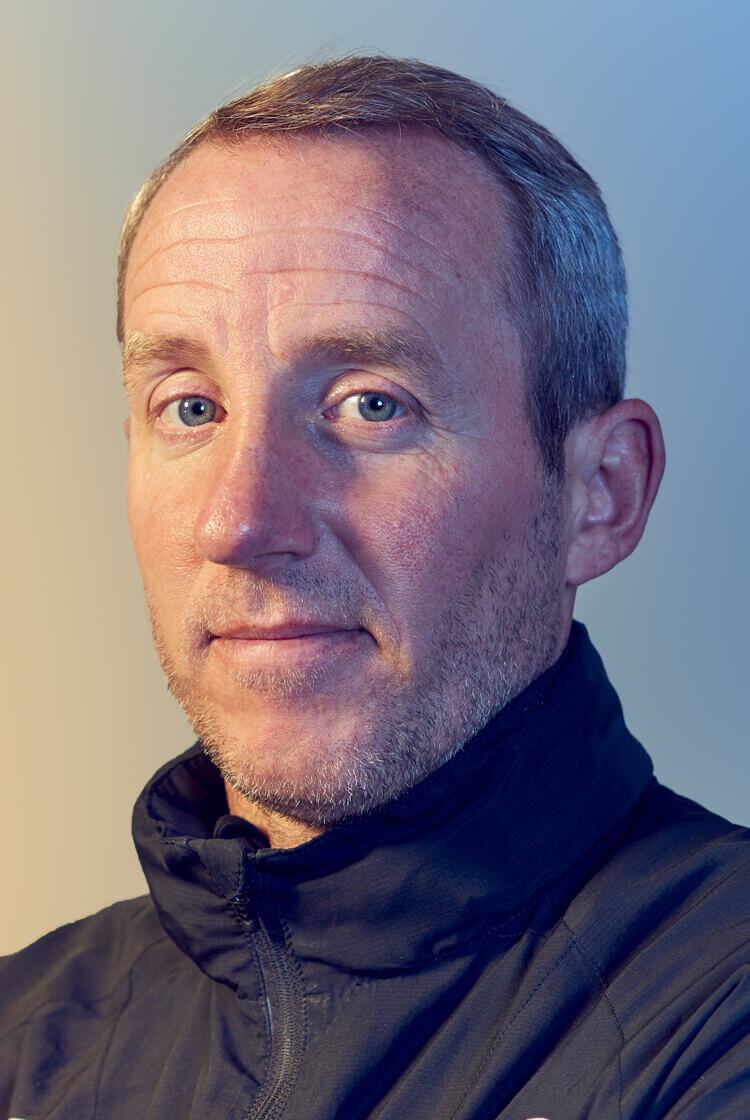 I had no intention of being a manager.

I had no intention of staying in football at all, once I’d finished playing. I loved playing and training, but the travelling and everything else that came with it I could do without.

I’d had enough abuse in my career. I didn’t need any more.

I’ve always been into fishing, so I thought I’d get a lake and that would occupy my time. I wasn’t just going to sit at home and watch telly every day.

So that’s what I did: I got a lake in France, and spent a lot of my days either there or playing golf. It lasted for a few years.

Then I got a call from an old teammate, Harry Kewell (above). He was at Watford, coaching the under-21s. He was there on his own, looking after about 20 players, and asked if I could go and help him out.

It was only for about six weeks, so I thought I’d give it a go. See if I actually liked it.

I was passing on my knowledge. Taking extra finishing sessions with the strikers and working with the midfielders.

In that short space of time with Harry, we won five of our six games. One of the strikers, who hadn’t really scored before that, had started scoring goals.

I thought, 'You know what? I’m alright at this. This is quite good. It’s rewarding'.

"I hit a shot that rebounded off of a defender and smacked me in the face. It gave me a detached retina, so I couldn’t see"

That’s why I’ve come back into the game. To pass on my knowledge; try to improve players and make the team better.

In a way, it’s funny that my first coaching and managerial role was at Charlton. It’s back where I started as a player – back where my youth team coach John Cartwright had such an impact on my game.

Everything John had us doing was all about passing. Keeping the ball. Results weren’t that important to him – he just wanted us to do things the right way. He was big on playing one and two-touch. As a midfielder, he’d make me think. 'Can you feed that one first time around the corner, then get it the other side?'

I took on his knowledge, and now I’m passing it on to midfielders. If it worked for me, why can’t it work for them?

George Graham was next to leave his mark on me.

I was 19 when I signed for Howard Wilkinson’s Leeds United. At first, it was difficult. I’d left home, where my mum had done everything for me. I couldn’t cook, clean – nothing.

In my fifth game for the club, I hit a shot that rebounded off a defender and smacked me in the face. Detached retina. I couldn’t see.

When I woke up from the operation the next day, I was hit with two pieces of bad news.

First, Howard had resigned. Nice one.

Next it was the doctor’s turn. He told me the operation had gone well, but when I asked how long it would be before I was back playing, he didn’t sugar-coat it.

"If I’ve done something wrong, give me a rollicking and I’ll get better. If you told me the truth I would give you everything"

Thankfully, my eye healed well, and in George Graham, the club brought in someone who instilled something new in me. Who made me a better player.

How? He dropped me.

I’d been playing well. Scoring goals; making goals. But I didn’t really track back. Until I did that, George said I wasn’t going to play.

I wasn’t convinced. He won’t drop me. I’m flying.

But he did. I remember one game, we were 3-2 down to Derby after the first half and he brought me off the bench at half-time. We ended up winning 4-3, and I scored the winner.

I played really well when I came on, too. Changed the game. Surely, I’ve got to start next week.

But no. I was back on the bench. That lasted for about six weeks. In George’s mind, until I started doing the other side of the game, I was worth sacrificing for the good of the team. Yeah, I might do something good going forward, but I could let them down going the other way,

I learned that you can’t carry anyone. It wasn’t about punishing me – he was thinking about the team.

I say the same thing to all my players now. I don’t care what you do individually – the team is the most important thing. I drum it into them – give me that hard work, and anything else is a bonus.

I was the kind of player George’s approach worked with, because all I wanted was the truth. If I’ve done something wrong, give me a rollicking and I’ll get better. Then I’ll get better again. Tell me the truth and I’d give you everything.

Some players aren’t like that, though. I’ve witnessed it. Mark Viduka was one who just needed a cuddle – put your arm around him, tell him he’s the best, and he will be the best.

I’ve seen it with all different players, including top international ones. They’re still people, with feelings.

You have to try and figure out how to treat each person.

"A team is like a puzzle. Every player brings a different piece"

I definitely learned a lot from being in the game for as long as I was.

As a player, I’d sometimes go in for tackles that maybe I shouldn’t have. Terry Venables once told me I was too competitive – that I overstepped the mark. I agree. At times, that was true.

With my players now, I’d never tell them not to compete. Not to tackle. At Charlton, we had a player called George Lapslie, who reminds me a bit of Scott Parker. He’s everywhere on the pitch. Tackling; competing for everything.

You just have to try and control it. Guide him. But you can’t take that edge away from someone.

It’s something that’s instilled in you. Some players haven’t got that competitive side, so you need to look after the ones who do – they’re just as valuable as your striker or your winger.

A team is like a puzzle. Every player brings a different piece to it.

It’s similar with coaching. When Karl Robinson (above) first spoke to me about coming to Charlton, the idea was that I’d come in two days a week to work with the young midfielders. He wanted someone to get in the box and score goals from midfield.

Soon, he was asking me to come in on a Friday as well. Then it was: “Why don’t you travel to games with us?” Before long, I was there every day.

I enjoyed it. You would hear people look at players you’d worked with and say: “He’s doing really well now.” That makes you feel a bit proud. You think, 'I’m part of the reason why that’s happening'. It’s a good feeling.

There was one part of the job I found hard to get used to, though. When you’re a player, you get rewarded at the end of the week, because you get a game to play in. As a coach, you’re not playing on the Saturday.

As much as it’s good to watch the game if you win, you can’t influence it in the same way as being out there, trying to make something happen. That was the big difference. I couldn’t feel the reward because I wasn’t playing, and that was always the most important thing for me.

I was very fortunate to play for as long as I did, but now I realised I had to just step back and enjoy what we were doing as a team.

"I wanted to do whatever I could to help the club get back into the Championship. I honestly believed that we were going to"

Towards the end of that season, Karl found out his assistant would be leaving in the summer.

I threw my hat into the ring: “I could do that.”

Karl wasn’t sure: “You’ve got to analyse the other team. Look at their strengths and weaknesses.”

We agreed that I’d assist him for the last few games of the season and see how it went.

From the start of the next season, I was the assistant manager of Charlton Athletic. I still had no intention of becoming a manager, though. My thinking was, 'I’ll just stay in the background where there’s no pressure on me, where I’m not going to get abuse from the sidelines. This is just a nice way of giving something back to the game'.

But things change. Karl left. With 10 games of the season to go, the club put me in charge on a caretaker basis.

I saw it as a new challenge. Now I was back in the game, that feeling I had as a player – that need to win – was back.

I love the club and I wanted to do whatever I could to help them get back into the Championship. I honestly believed we were going to do that.

When I first took over, they’d won one in their last eight and the players were dented because they thought they were out of the playoffs.

From day one, I was honest with them – if anyone wants to play as an individual, they won’t play. I’ll only play people who are going to play for the team.

They had to work hard, too. Training became a lot more physical. More intense. I believe that you should train the way you play because you can’t turn it on and off. You can’t think, 'I won’t do so much today, but on Saturday I’ll be fine'. It doesn’t work like that.

Everything went up a notch. Standards got better, and we got better. They believed in what we were saying and came together as one. It’s vital that you all believe in the same thing and work hard for each other, because there’s going to be times when someone isn’t doing so well and you have to pull together.

People probably think of me as an intense person, and yeah, when I’m at the club or doing something to do with football, then I’m 100 per cent focused and give my all. But I do try to step away from it when I can. You have to – otherwise you’d go mad.

Believe it or not, I’m pretty laidback when I come away from football. I like to think I can switch off. My kids are a good example of that. My little girl is very competitive – she has to win. But my boy has more of the laidback side. I’m a bit of both.

I suppose it’s obvious that my views on the job have changed since I retired from playing. But one thing about me that will probably never change is how I feel after a defeat.

As a player, it always took me a few days to get over it, and I’m the same now. I was proud to be the manager. Proud to be back at the club where I started out as a kid, and to be passing my knowledge on to others.

It might not have been my intention, but once I’m in it, I’ll give it my all. I don’t know any other way.