Profile
The 2019/20 season was one to remember for Mason Mount who, trusted by Chelsea’s manager Frank Lampard, became a consistent figure in their starting XI despite previously having no Premier League experience, and responded by quickly adjusting to its demands. Mount had spent 2018/19 under Lampard at Derby, where he shone in the Championship, and he has since swiftly proved he is capable of playing at the top level.

Such is Lampard’s faith in the young midfielder that he has challenged him to win more than the 106 England caps he recorded over his 15-year international career. “This is just the start for Mason,” Lampard said. “When a player comes in and plays consistently in the team in their breakthrough year, people sometimes treat them as though they are older than they are – but he is still young. He will get a lot better.”

Tactical analysis
Mount is a versatile player who can occupy a number of different roles, either in a front three, as an attacking midfielder behind a striker, or as a central midfielder who withdraws to collect possession from defence. Though he is good in each, he is at his best in an advanced central role, where he provides creativity and a consistent threat on goal.

His ability to receive passes from any angle and to quickly move himself into a forward-facing position with very few touches is an extremely valuable trait, and one that means he is both comfortable and effective as a number 10. Instead of setting possession back – and potentially sacrificing his team’s momentum – Mount shifts his weight to maintain the speed of their attack, which is ideal for quickly linking with the runners ahead of him.

That he can do so is particularly attractive to England manager Gareth Southgate, who will relish having a player of Mount’s abilities emerging at Chelsea. With Mount and James Maddison, England have two midfield playmakers when at the 2018 World Cup they arguably had none. Raheem Sterling, Harry Kane, Marcus Rashford and Jadon Sancho all benefit from the nature of forward passes Mount constantly looks to play. He is ambitious with his passing, but his passing can also sometimes be over-ambitious. He has more success when dribbling, and driving forwards from a central area.

When without possession he shows energy and a desire to win it back high up the pitch, and he also shows good anticipation and a sound reading of the game in predicting how his opponents will try to play. His dynamic approach led to a number of goalscoring chances for Chelsea, including that he scored against Leicester City when he dispossessed Wilfred Ndidi on the edge of the area (below). He is extremely composed when in or near the penalty area where, because of the low centre of gravity that makes him capable of evading defenders attempting to pressure him, he is able to quickly change direction, and he can also finish impressively, often shooting powerfully without sacrificing accuracy. His dribbling abilities are particularly useful in those crowded areas and against deep-set defences, which Chelsea regularly encounter. 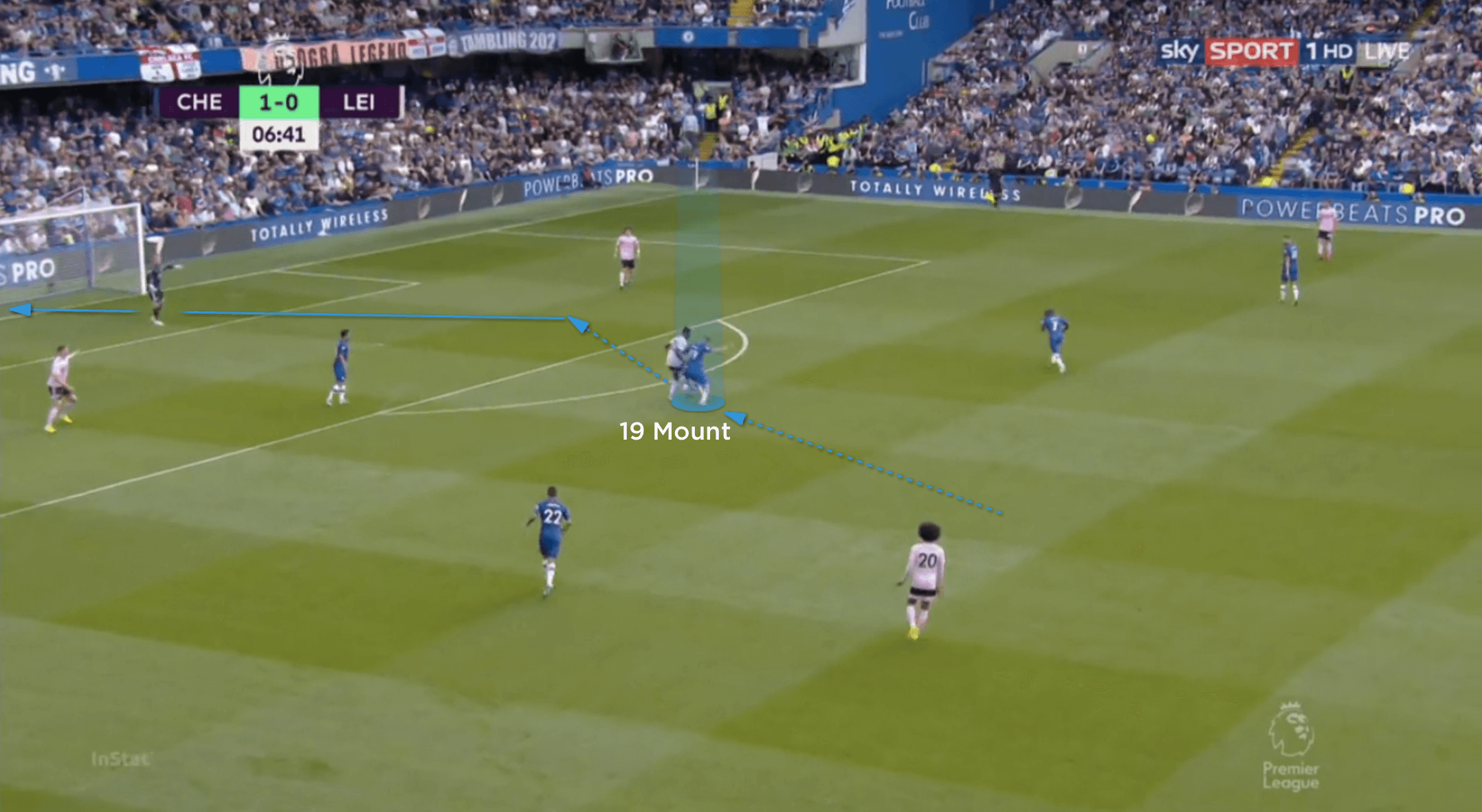 Role at Chelsea
Mount has spent most of his time at Chelsea either in midfield in their 4-3-3 – though never as the central player of that three – or as the number 10 in their 4-2-3-1. He has also featured in their front three, but as a free-roaming attacking midfielder who drifted from a wide position instead of as a touchline-hugging winger or inside forward. He started 32 of their 38 Premier League matches in 2019/20, and played a crucial role.

When Chelsea have possession he tries to adopt positions from which he can progress play, such as on the outside of the opposing central midfield and behind their wide midfielder (below). He receives passes with his body on the half-turn, and takes his first touch with his back foot, meaning he is already in a position to advance as the ball approaches him. 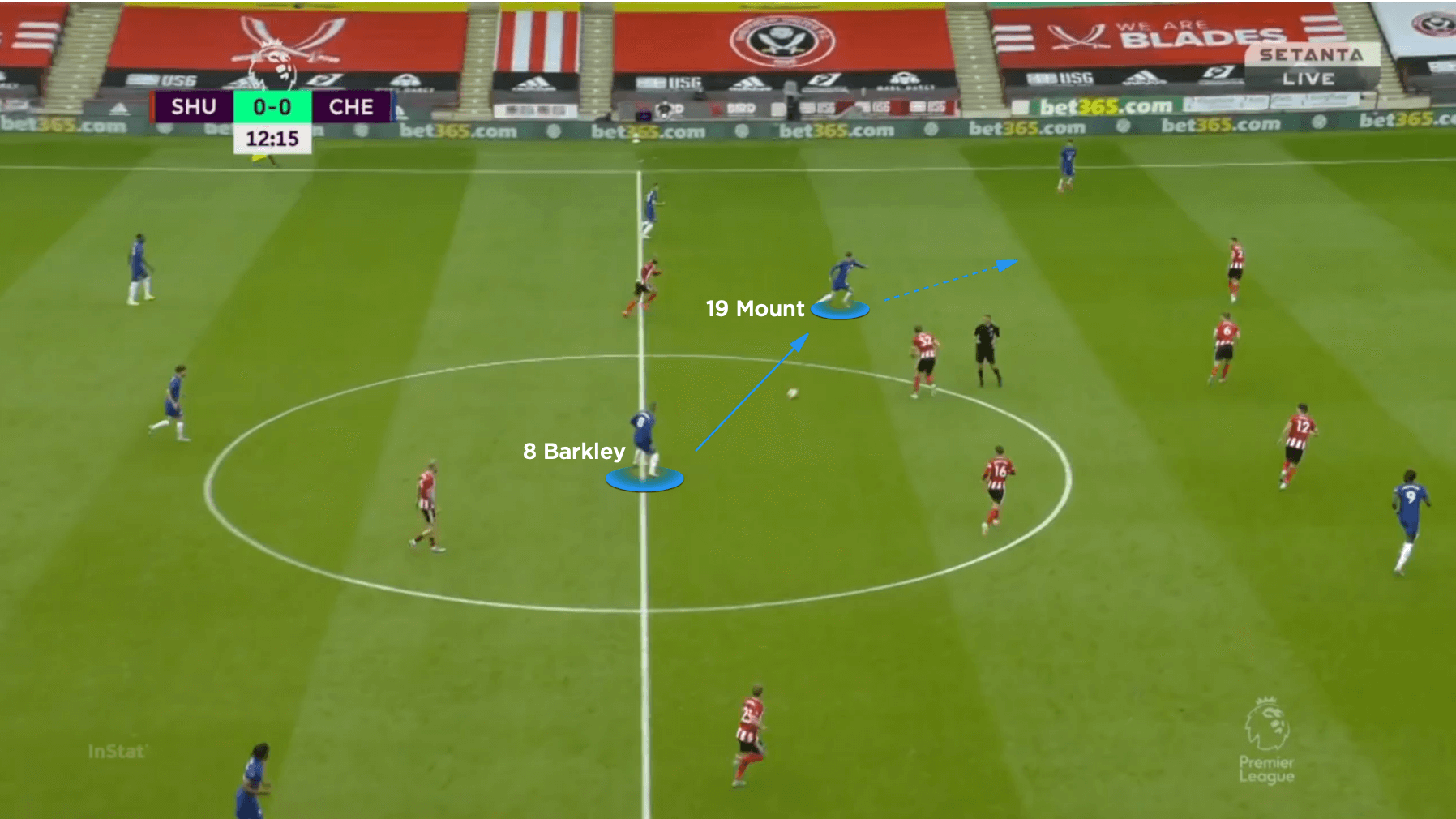 The majority of the goalscoring chances he creates come from him moving towards the left; he is adept at timing his runs to make the most of the spaces that exist there. He has the vision to identify the best time to deliver the ball to a teammate, though when playing from his weaker left foot his final ball needs to improve. Given the number of times he has been in a promising position with at least one teammate in support, Mount should have recorded more than his five league assists.

The majority of those assists – as well as his superb goal against Wolves – came from dead balls. Mount’s technique is incredible, and he is able to deliver dangerous crosses from which his teammates have thrived. If this is far from the main threat he poses in the final third, it remains an additional asset, and perhaps one Southgate particularly values. As Lampard has recognised, there is much more to come from Mount, who has already made himself a crucial part of one of the best teams in the Premier League. There is little reason he cannot target his manager’s caps total; he will also hope to win as many trophies as Lampard once did. 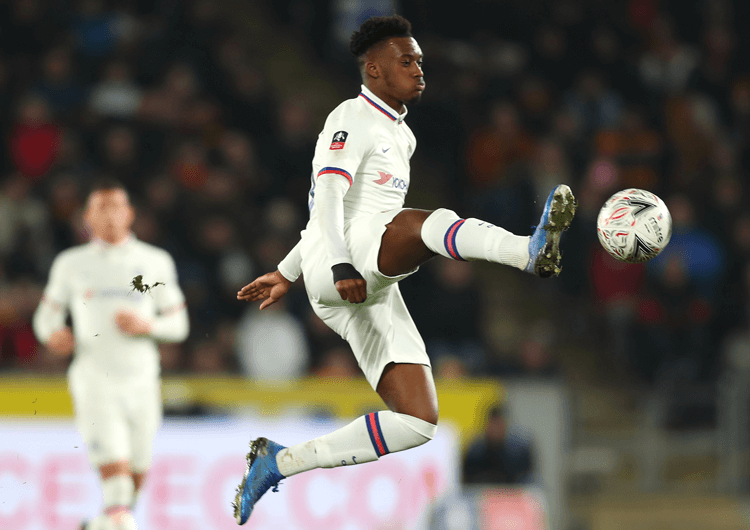 Chelsea resisted interest from Bayern Munich in Callum Hudson-Odoi before he became a regular in Frank Lampard’s team. We assess him 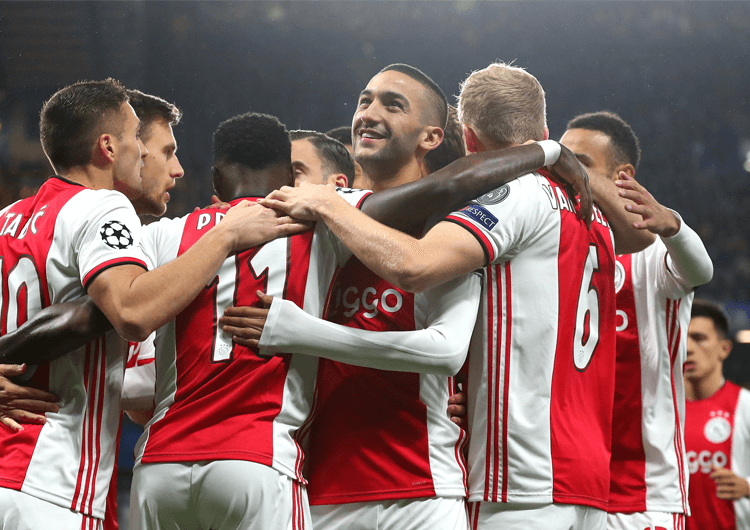 Our professional coaches assess what Hakim Ziyech will bring to Chelsea, and why he has been made Frank Lampard’s first major signing

Christian Pulisic’s arrival at Chelsea put him among those being asked to replace the departed Eden Hazard. We assess what he brings to the Premier League