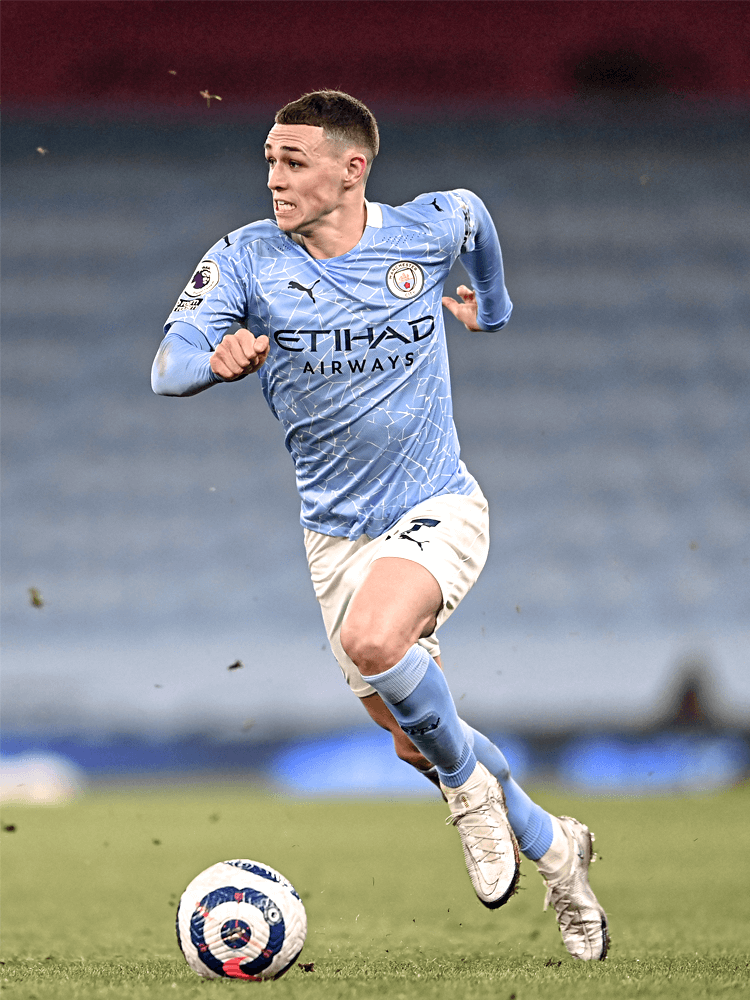 Profile
One of the most talented young English players of recent times, Phil Foden is already an established figure in the Premier League. Having stayed at Manchester City – rather than leave on loan – to learn under the guidance of one of the competition’s greatest ever creators in David Silva and one of its best managers in Pep Guardiola, Foden has more Premier League and Champions League experience than most his age.

After Silva's departure for Real Sociedad at the end of 2019/20, Foden’s playing time has increased – and Guardiola is under no illusions about just how special a player he can become. “(England manager) Gareth Southgate has an incredible talent on his hands for the national team,” Guardiola said. “I’ve seen many players in my life – I have trained incredible, incredible players, and Phil will be one of them.”

Tactical analysis
Foden is a rare breed of English footballer who is completely at home at the heart of midfield in a team managed by Guardiola. His exceptional first touch, close control, balance and poise on the ball combine to make him more reminiscent of a modern Spanish midfielder than one born in Stockport in May 2000.

Foden’s technique is similar to that of a young Jack Wilshere – always on the half-turn when receiving a pass, and always looking to take his first touch with his back foot, primed and ready to progress play with his next move. He also possesses a Wilshere-like ability to glide past challenges like they weren’t there.

He is ambitious and forward-thinking with both his passing and his dribbling, and equally comfortable in a position between the lines (below) and coming deep to collect the ball from in front of the opposition's midfield. From deeper positions, he often fizzes passes into more advanced teammates before making a run and offering an option for a return pass to try and work his way through a crowd.

At other times when he gets on the ball in deeper positions he spreads play with long, low-trajectory passes in an attempt to help pull the opposition apart and create gaps – either to find one of City’s wingers, who tend to hug the touchline, or to invite a full-back forward to join their attack. Wherever he gets on the ball, he wants to make a pass that will have a positive impact on his team’s attempts to move forwards.

He dribbles almost entirely with his left foot, and takes lots of small touches, ready to react to any attempt to tackle him and able to move the ball in either direction to avoid his opponent. He is brilliant at dropping his shoulder and then bursting forward to break lines, often doing so from a standing position after receiving a pass under pressure. When he reaches full speed he is a deceptively powerful runner who can be difficult to stop.

Foden also scans his surroundings constantly and knows exactly what the picture is behind him, which makes him particularly effective in between the lines. He makes good decisions over whether to turn – and in which direction – or whether to play the ball around the corner to a teammate (below), as he did to leave Andy Robertson before scoring City’s third in their 4-0 win over Liverpool in July 2020.

The evolving picture that Foden builds in his head means he knows when to draw pressure in, and thereby create spaces for others. It is common to see him moving around the final third, playing bounce passes to wingers, full-backs and centre-forward in an attempt to pull opponents out of position. Doing so is particularly useful against low-block defences, which City regularly encounter.

Role at Manchester City
The majority of Foden’s appearances for City have come from the bench, and when he has started, there has been little consistency to the position he has played. In nine Premier League starts in 2019/20, Foden featured on both sides of a three-man attack in a 4-3-3 and in all three attacking midfield positions in a 4-2-3-1, but in 2020/21 he has been given a more regular role – on the left of their front three.

He tends to try and get on the ball in the half-spaces – on whichever side of the pitch he is starting – and he is extremely effective in those positions (below), requiring only one touch to get the ball under control before turning or playing a quick pass. His speed of thought and action mean he is ready to play a key role in competing for both the Premier League and Champions League titles at only 20 years of age.

If play is moved directly to the front line and bypasses Foden, he makes clever, curved runs to lose his marker and end up in a central position, facing goal and ready to receive a set from the more advanced teammate. From that position, Foden’s pass selection and weight of pass are both assets – he has the ability to find a runner in behind the deep blocks City often face. He is not yet at David Silva’s level in that regard, but he has plenty of time to further improve.

One of the reasons Guardiola likes Foden so much owes to his work during defensive transitions. Guardiola's teams are known for counter-pressing, and Foden is one of City's best in those situations. His forward-thinking mentality in possession transfers into transitions in that there is no delay in his reaction to losing possession. He often forces errors from an opponent who has just regained possession, and also frequently intercepts a pass early after the opposition has won the ball.

For all of the excitement about him in Manchester, Foden is also an English player like no other presently playing. The prospect of him continuing to grow in importance for City ahead of the delayed Euro 2020 tournament in the summer of 2021 is also hugely exciting for Southgate and England.