Profile
After so memorably leading England to the semi finals of the 2018 World Cup, Gareth Southgate is confronting the unprecedented challenge of managing their campaigns at a European Championship and a further World Cup in the space of 18 months. A largely unproven figure when, at the age of 46 in November 2016, he was appointed the successor to Sam Allardyce, Southgate’s bold approach to what is so often referred to as the “impossible job” has already made him the most successful England manager of the 21st century.

“He has found the process as he has gone along, being brave enough to try, one, a new system and two, new players,” Allardyce once accurately said of his progress. “That has given young players a chance and he has evolved a squad. One would hope at both ends that works well – from an attacking point of view and that they defend well.”

Playing style
The philosophy that first took Southgate into contention to manage England was established when he worked with the under-21s. His starting structure was most consistently a 4-3-3 – but one that was flexible enough to convert into a 4-2-3-1 when he felt it necessary to introduce a double pivot at the base of his midfield – and their attacking play was built on the wider rotations they offered with which their wide forwards moved infield to support their lone striker.

The England Under-21s’ attacking central midfielders adapted their movements to support those attacks, and their full-backs offered both overlaps and underlaps, to which their defensive midfielder would respond. Those wider rotations also involved one attacking midfielder advancing and rotating with the relevant wide forward – particularly when the midfielders selected had the attacking instincts of Jesse Lingard or Ruben Loftus-Cheek – and a full-back advancing to cover alongside the starting defensive midfielder. It was when one full-back overlapped and his movements were covered by a central midfielder that an alternative double pivot was formed.

Their most consistent shape, regardless – and one that became even more common towards the end of Southgate’s reign – remained both full-backs advancing and those in central midfield exercising greater caution, via James Ward-Prowse, Will Hughes, Tom Carroll or an alternative moving to behind their full-backs and supporting from behind the wide forwards who had moved infield (below). In those circumstances a less temporary double pivot was often used, behind a number 10 advancing towards the lone striker and rotating between their wide forwards.

That same shape was retained when Southgate was first promoted to manage the senior team. Kyle Walker and Ryan Bertrand or Danny Rose overlapped from full-back, and Raheem Sterling, Adam Lallana, Lingard and Marcus Rashford attacked infield as wide forwards, either side of Dele Alli supporting Harry Kane from his role as their number 10, in the knowledge that Jordan Henderson and Eric Dier were providing security at the base of midfield. 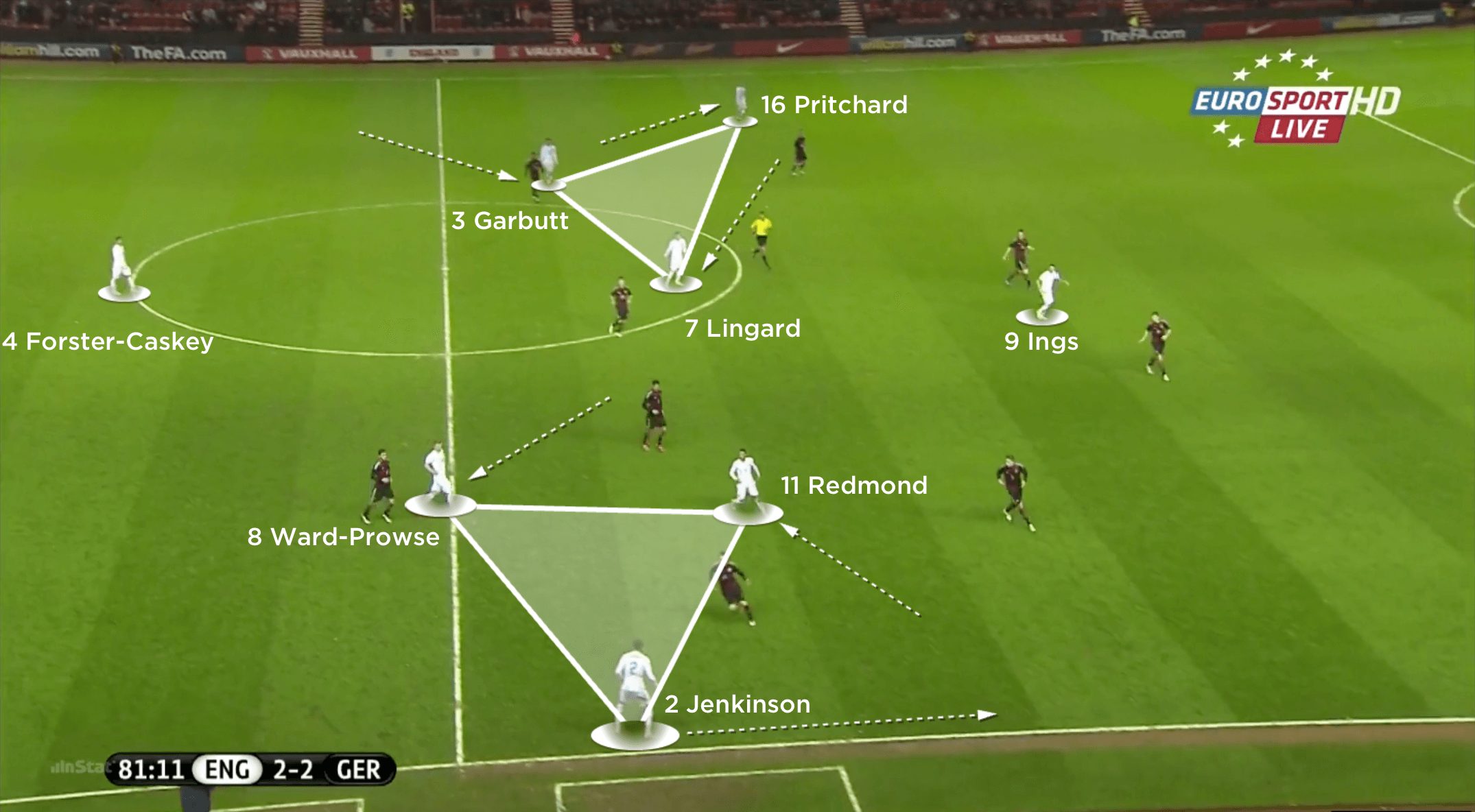 It was in the build-up to the 2018 World Cup that England used a back three (below), as they did when Glenn Hoddle was manager 20 years earlier and Southgate was often one of his central defenders. Kieran Trippier and Ashley Young were chosen at wing-back because of their ability to deliver accurate crosses from wide areas and set-pieces, when England were at their most effective.

Kane was supported by Sterling in an unorthodox front two, and Alli’s forward runs – often made when Sterling withdrew to contribute to combinations through the inside channels – enhanced the threat they posed at crosses. With Henderson consistently their most defensive midfielder, Lingard switched between being cautious and being ambitious. When both wing-backs advanced he remained deeper to assist with breaking beyond the opposing midfield line; when he moved forwards to create, Sterling moved deeper to receive in a  withdrawn role, and Alli moved wider in anticipation of attacking a cross or creating room for teammates to rotate and move into. 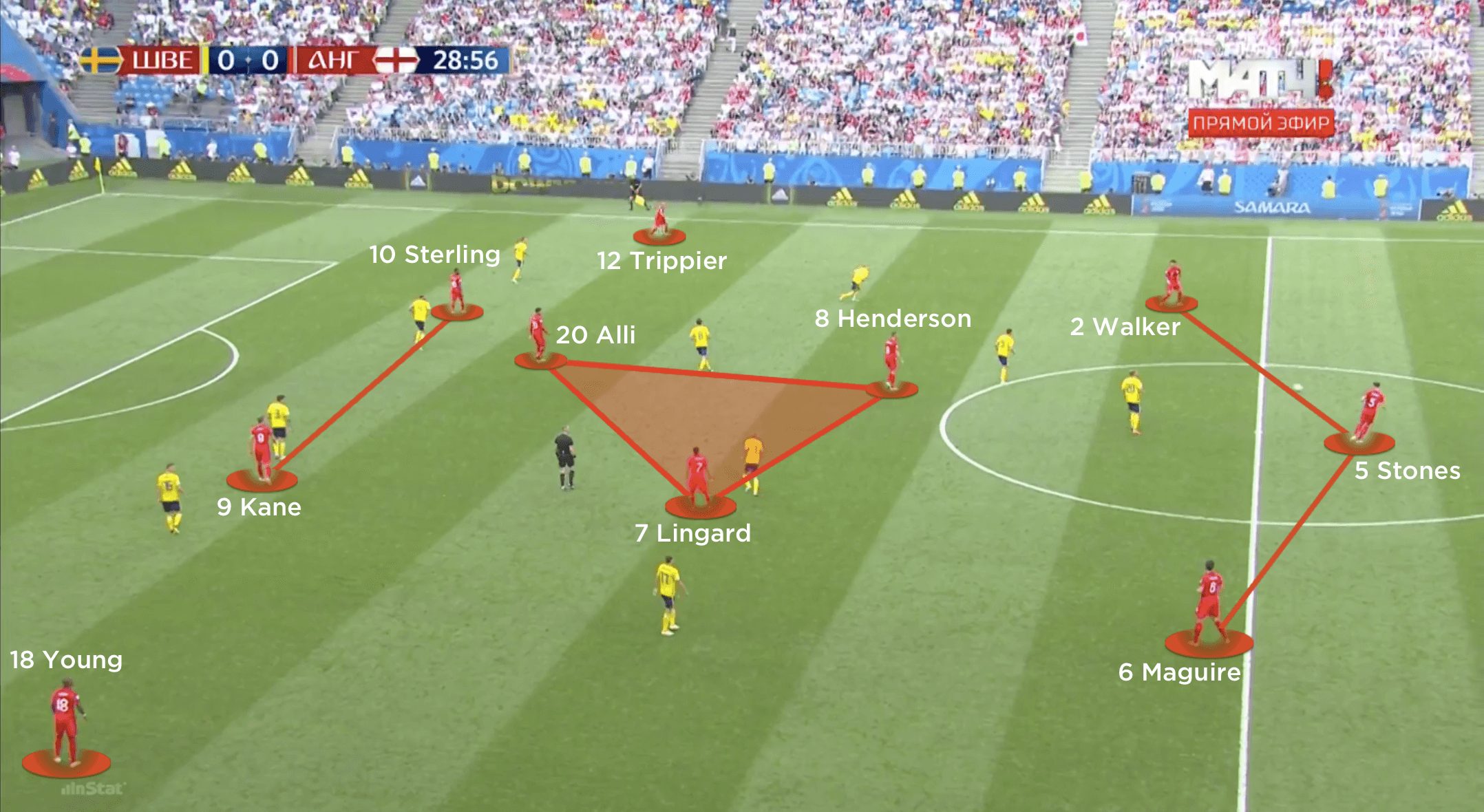 For all that that system took them to the semi finals of Russia 2018 – the first time England had reached the final four of a major competition since Southgate played under Terry Venables at Euro ’96, or of a World Cup since Italia ’90 and the reign of Sir Bobby Robson – a back four returned for the majority of their first Nations League and Euro 2020 qualification fixtures. Similar rotations to those demonstrated by the England Under-21s also returned. It was when they participated in the Nations League for a second time that a back three was reintroduced via a 3-4-3 (below) in which Declan Rice and Kalvin Phillips started to form their double pivot.

It is likely that the development of so many creative midfielders, in Mason Mount, Jack Grealish, Phil Foden and James Maddison, since Russia 2018 contributed to Southgate persevering with a structure that allowed the two selected to work through the inside channels. Rashford and Sterling, similarly, operated from more narrow roles, even if from those roles they remained capable of playing further forwards. There were also occasions when Mount featured in a double pivot  before advancing to offer an additional number between the lines, and when England were building with greater aggression. Mount’s movements were similar to those offered by Lingard in their previous 3-5-2, but unlike in that 3-5-2, England’s two number 10s rotated with the wing-backs outside of them; there have also been further experiments with the longer-term 4-2-3-1. 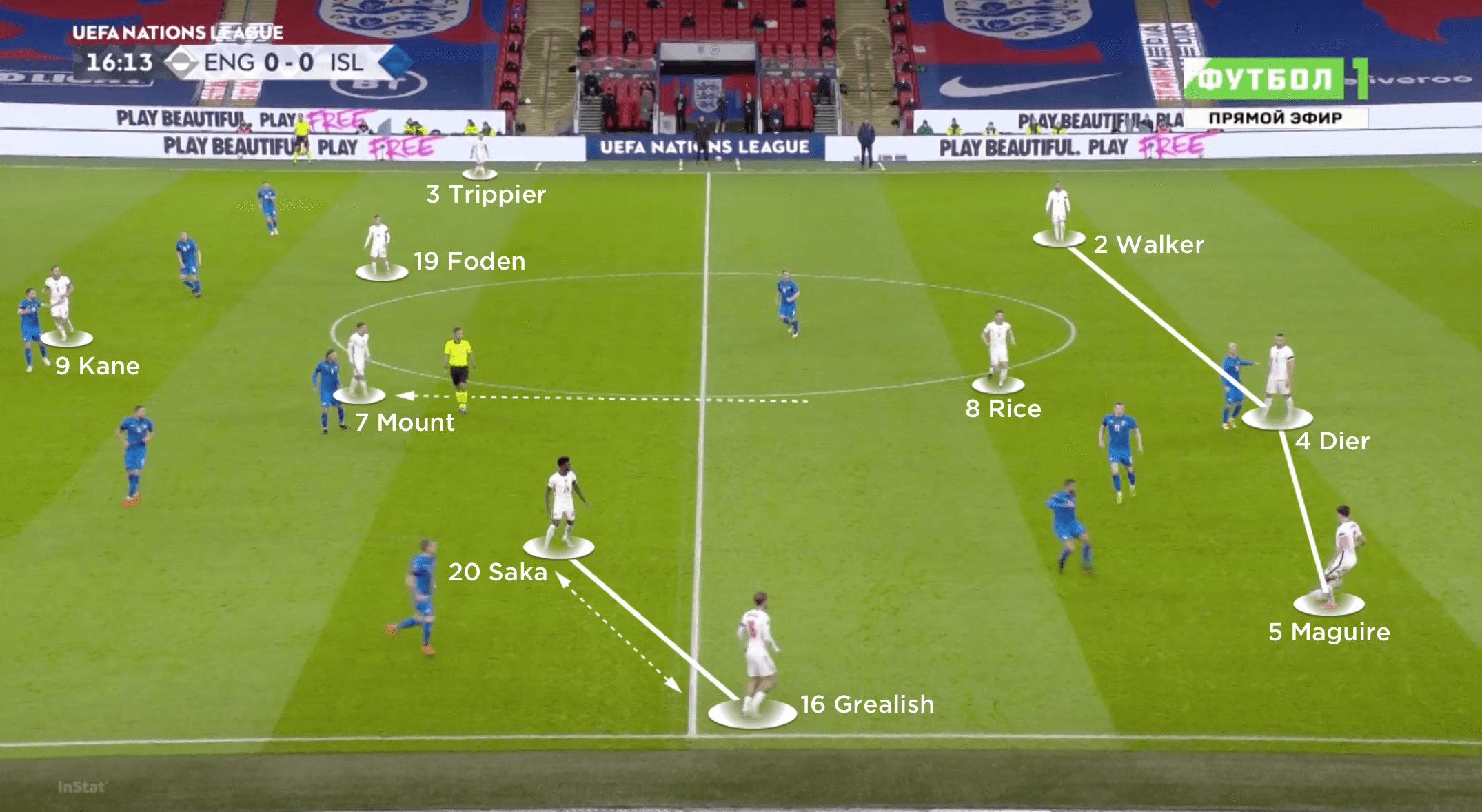 Defending and pressing
Southgate’s England Under-21s alternated between defending with a mid-block and defending from further forwards, even if their mid-block (below) – particularly against stronger opposition – was more common. Their higher pressing strategy revolved around their wide forwards moving into narrower positions and then moving inwards to force the ball into the centre of the pitch and towards their midfield three, and was applied after losses of possession in advanced territory, and complemented by their striker pressing from behind.

During lengthier periods without possession, if the opposition had resisted their higher pressure, their wide forwards pressed even further infield, the most attacking central midfielder moved to towards the ball, and their striker slightly withdrew and remained braced to press switches of play. If defending with their more common 4-3-3 instead of the 4-2-3-1, there existed an additional figure further forwards, so the striker remained more advanced to instead press backwards passes and, if necessary, prioritise the opposition’s goalkeeper. The relevant attacking midfielder covered longer-range passes, and was supported by his closest wide forward. 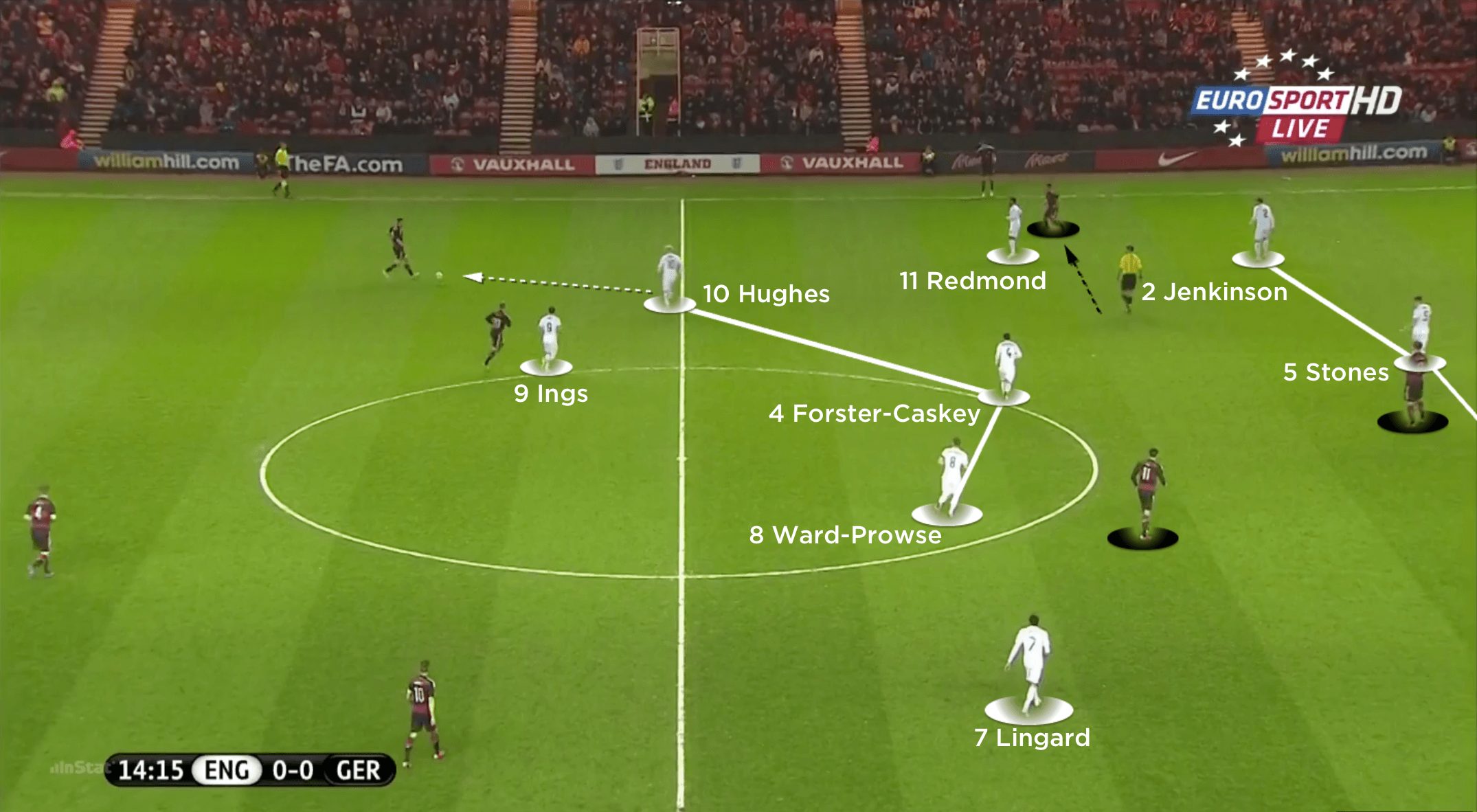 When they recovered into a mid-block, both wide forwards focused on forcing the ball away from the centre of the pitch. The spaces between the lines became the key area for opponents to target, so one of the under-21s’ attacking central midfielders advanced to press from alongside their striker, but from their 4-3-3 the other central midfielder often struggled to cover alongside the defensive midfielder, who as a consequence struggled to defend.

If that defensive midfielder followed the press of the attacking central midfielder, the opposition initially built around the under-21s’ block and, via a wide midfielder and full-back, worked the ball back infield to a forward-running midfielder or withdrawing attacker. If that defensive midfielder instead held his position, the opposition instead routinely progressed the ball. Southgate’s team, regardless, was being forced into a lower block they didn’t want to adopt, and from which they were less convincing at remaining compact and resilient, and therefore required emergency defending that too often didn’t succeed. 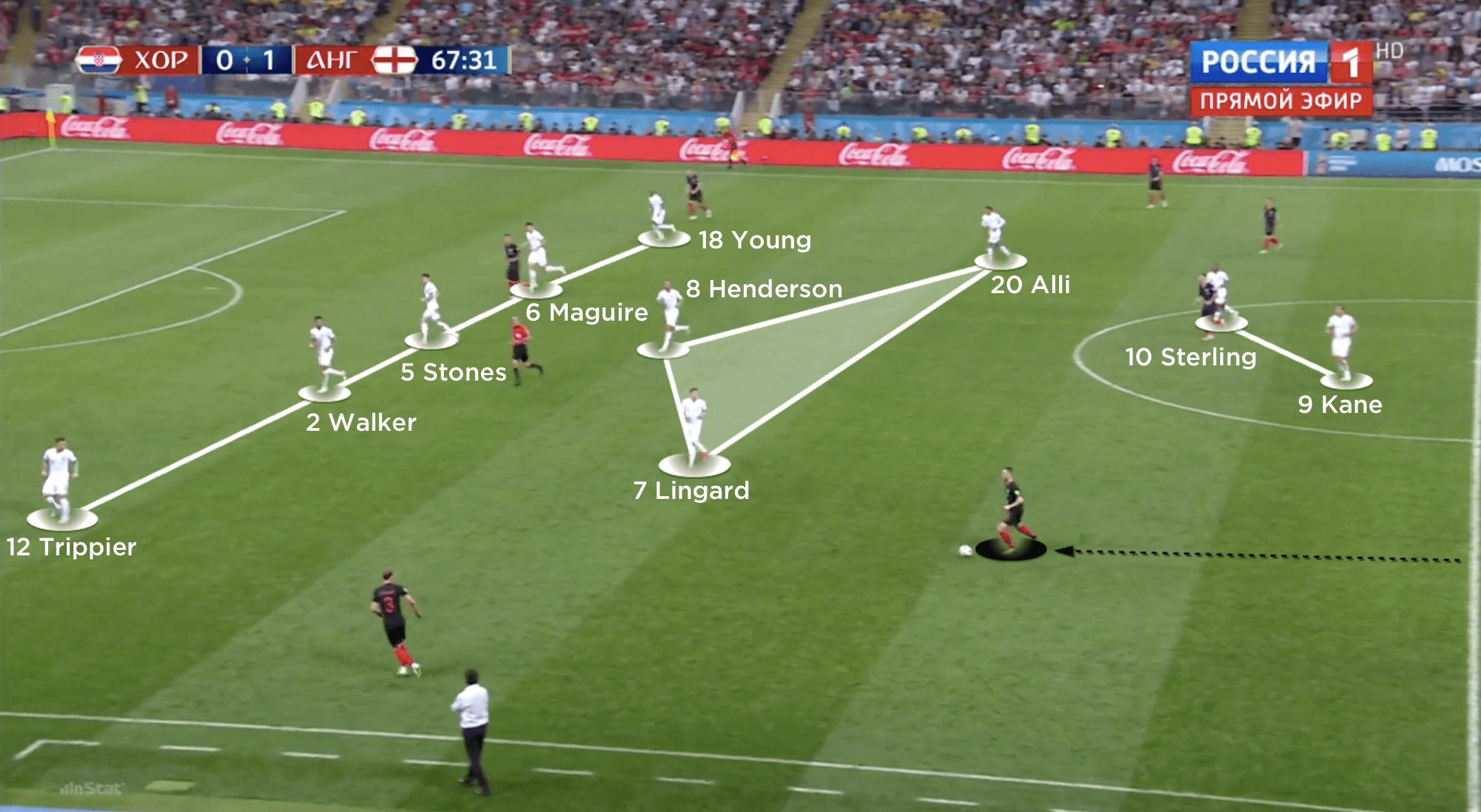 The majority of the goals the senior team have conceded under Southgate have owed to individual errors committed when England have attempted to play out from defence, or when poor positions have been adopted when defending against attackers making runs in behind. There have also been occasions when, if organised into a system built on a back four and using a mid-block, similar flaws to those seen with the under-21s have existed, contributing to the use of the back three and wing-backs that followed. The additional figure in central defence was complemented by wing-backs willing to recover into defence (above), and strong when defending one-on-one and covering the far post.

The use of Walker as a third central defender gave England pace they previously lacked during moments of transition – particularly when a high defensive line was used – because of the cover he offered in the spaces in behind them when they were applying a high press or possession was conceded when attempting to create in the attacking half. John Stones, Harry Maguire and Dier were, by comparison, more vulnerable against athletic strikers, particularly over lengthier distances. 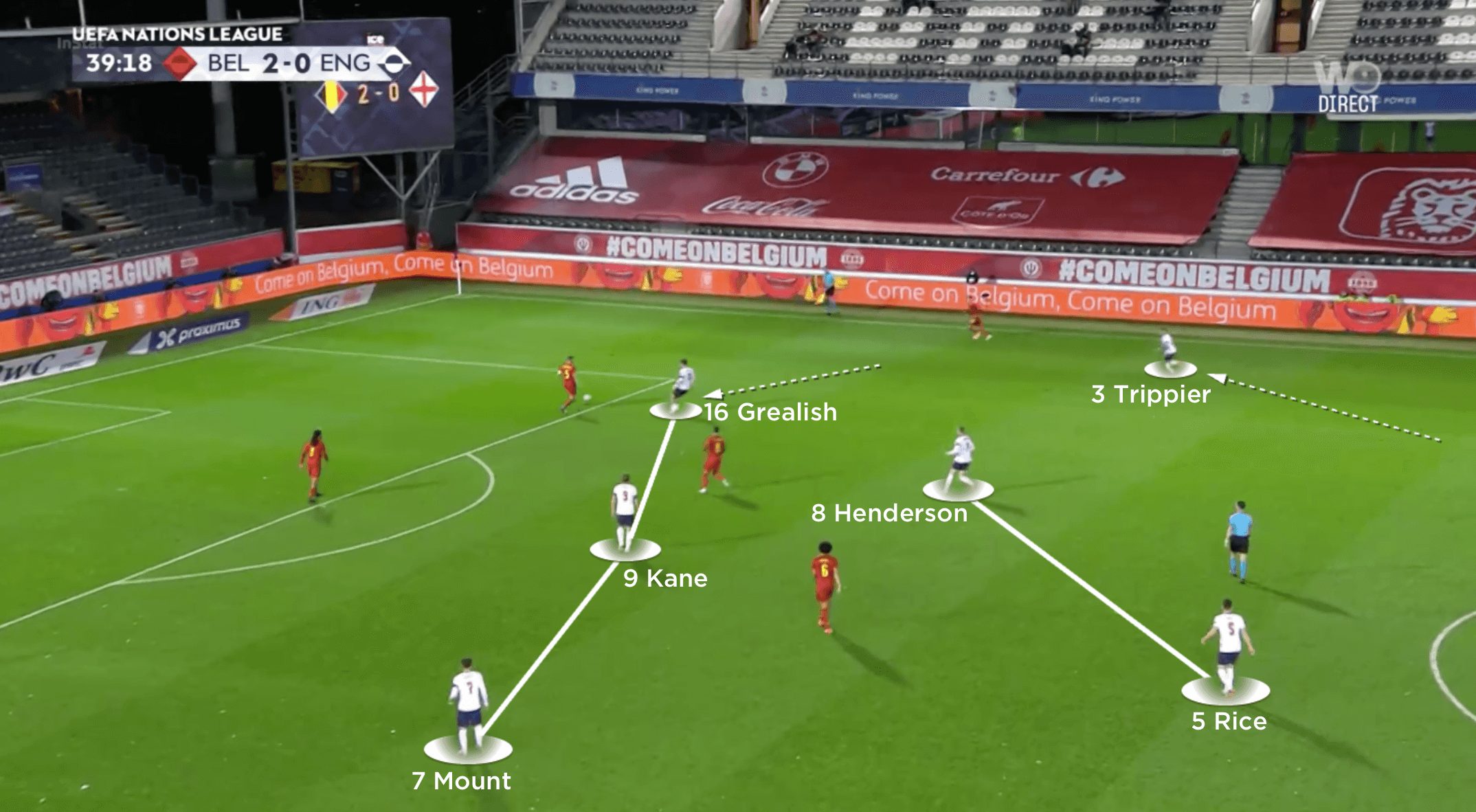 The same 3-5-2 featured a central midfield that, as when they had possession, was capable of adapting to the demands of what was unfolding. Two midfielders formed the first line to screen the opposing double pivots England encountered; when opponents built around them and progressed the ball through midfield, Young and Trippier recovered into defence, contributing to the adoption of a lower block. With one attacking central midfielder then forced to press wide, increased spaces existed in front of central defence, ensuring that if the other attacking midfielder didn’t tuck in, Southgate’s 3-5-2 experienced similar defensive imbalances to those seen with his 4-3-3.

His 3-4-3 offers the flexibility of converting into a 5-4-1 in which the two 10s selected alongside their lone striker offer improved defensive cover, though when there is only one striker potentially attempting to cover two defensive midfielders. England’s two defensive midfielders are positioned to both support a central advance and to cover in front of their back three. The use of a front three has also ensured a more effective high press because of their improved cover of the centre of the pitch and inside channels, and the further, delayed support provided by their wing-backs.

Similar movements exist in both the 4-2-3-1 and 3-4-3 – the greatest difference involves the removal of the 10 from the 4-2-3-1, and therefore the additional central defender, whose presence encourages the wing-backs in the 3-4-3 to advance at an earlier stage, and by extension the two 10s to move closer to the striker to support him. There ultimately exists protection of the central spaces when opponents build possession in deeper areas, and cover against the first and second phases of direct play aimed over the press led by England’s front three. 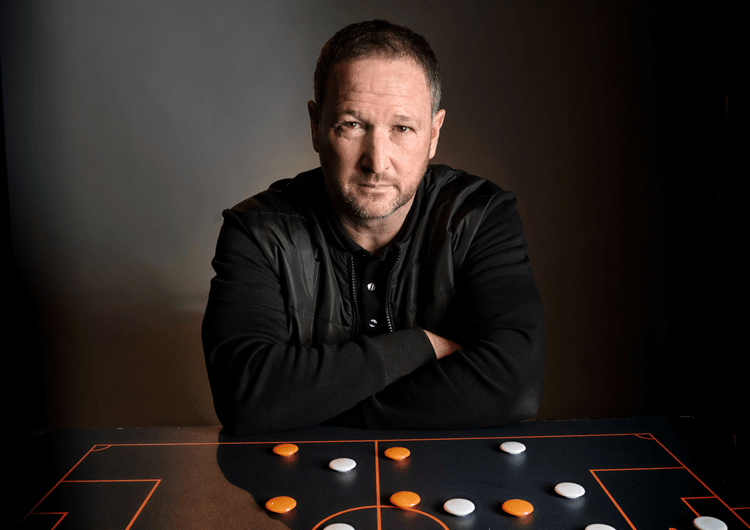 From his time as Chelsea’s assistant manager, Steve Holland revisits an iconic Champions League win over the Barcelona of Lionel Messi and Pep Guardiola

Gareth Southgate was named England manager on a permanent basis after a friendly against Spain in November 2016. He revisits that very game