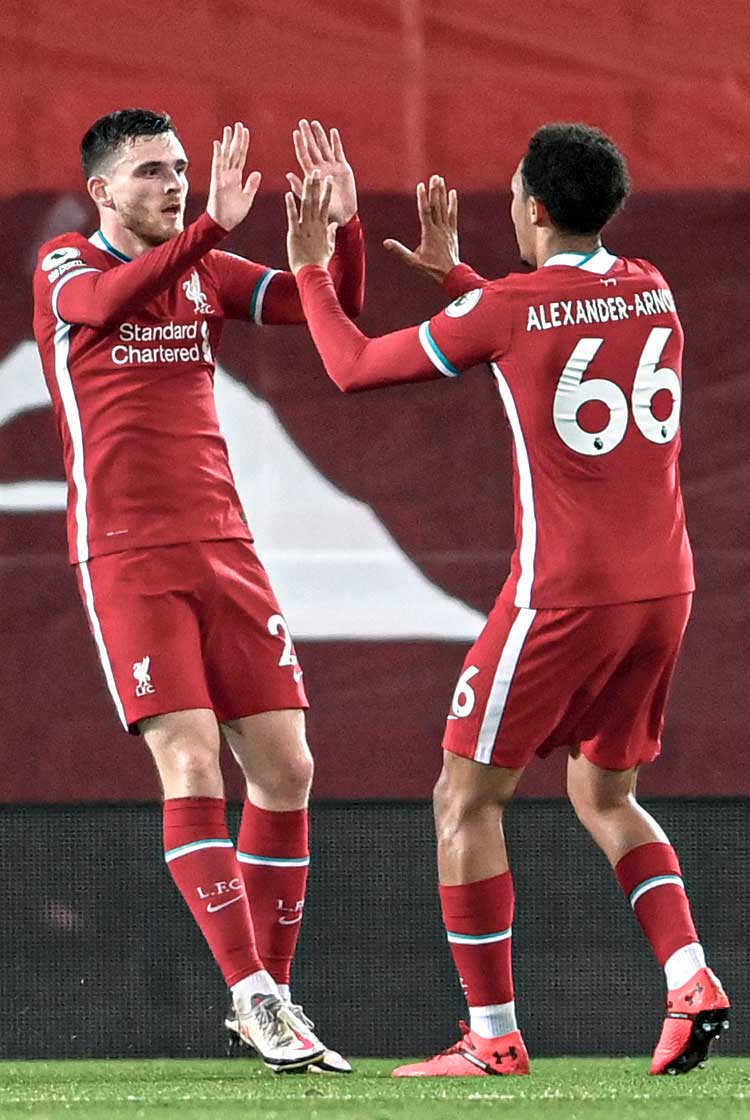 What is a modern full-back?
The modern full-back is a wide defender in a back line of four who, as well as defending the wide areas, is also responsible for joining attacks and creating chances. This is done primarily through forward runs that either overlap or underlap a winger or wide-midfield teammate. The modern full-back’s duties are at both ends of the pitch; they must support attacks and defend in almost equal measure.

Where does the term ‘modern full-back’ originate from?
Full-backs were originally the deepest players in the 2-3-5 formation that was common in the early 20th century, but as the four-player back line grew in popularity, the full-backs moved out to the sides. These players have traditionally tended to be defensive players, but there have been some notable exceptions – such as the Brazilian side that won the 1958 World Cup, with full-backs Nílton and Djalma Santos playing in attack-minded roles. As the game has developed, full-backs have grown in importance in attack: the term ‘modern full-back’ highlights the position’s all-round contribution in the modern game.

What are the in-possession responsibilities of a modern full-back?
A modern full-back must make constant overlapping and underlapping forward runs ahead of the wide teammate ahead of them in midfield. After getting into attacking areas, it is the full-back’s job to provide crosses, cut-backs, through balls into wide areas – or to run on to through balls – and switches of play.

Dribbling and driving forward runs over larger distances are also important, while the ability to beat an opponent in one-on-one situations and create is also useful.

Modern full-backs also have to provide their team’s width in attack, with wingers or wide forwards often taking up more narrow positions (such as Mo Salah, above). Full-backs often take up positions to receive switches of play, with this positioning also useful in that it takes opponents away from their wide-midfield teammate, who will usually be more dangerous in possession.

What are the out-of-possession responsibilities of a modern full-back?
Full-backs in the modern game are often tasked with playing a supporting role in pressing high up the pitch by moving into advanced areas, especially out wide. After pushing up high, the full-back tends to need to try and cut off direct balls down the touchline into the space behind them, with the aim of forcing play into more crowded areas.

Modern full-backs have to be extremely fit and hard-working, willing and able to chase back after a loss of possession to protect the areas outside the centre-backs. They need to cover long distances to chase the ball down after an opposition switch of play.
The modern full-back also has to be agile, fast and smart with their defensive positioning, and therefore able to defend effectively in one-on-one situations.

Who are the best modern full-backs?
Trent Alexander Arnold
In Liverpool’s 4-3-3 under Jürgen Klopp, Alexander-Arnold provides world-class crossing from a variety of positions. He is able to deliver dangerous balls from a static position a long way from goal, but also capable of making overlapping runs to the byline before picking out a teammate. He offers exceptional ability when it comes to making accurate switches of play, and he can break lines with through balls from wide areas and with direct passes over the top of the opposition’s defence.

Andy Robertson
Robertson provides a similar attacking threat to Alexander-Arnold in the same Liverpool side, but is more penetrative with his runs and offers a greater threat in one-on-one situations, able to push the ball past an opponent and beat them before crossing (above). He isn’t as technical as Alexander-Arnold, and offers less variety in his creative passing, but he’s more athletic and can cover ground more quickly both with and without the ball.

Jordi Alba
A key cog in the legendary Barcelona and Spain sides of the 2010s, Alba’s deep overlapping runs offer a constant threat down the left flank, and he benefits from the brilliant passing ability of his teammates. He is often found via direct passes through and over the opposition, but he can also receive on the turn, usually before putting a cross along the ground. He enjoys plenty of success in creating through cut-backs for Lionel Messi, who pulls back to the edge of the box. Alba’s vision, awareness of his teammates’ runs and ability to adapt his crossing depending on their position are some of his standout traits.

Which other players are examples of modern full-backs?
• Ashley Cole at Chelsea, in particular under Carlo Ancelotti.
• Dani Alves at Barcelona under Pep Guardiola.
• Kyle Walker and Danny Rose in Tottenham’s team under Mauricio Pochettino.
• Dani Carvajal and Marcelo for Real Madrid under Zinedine Zidane.

What are the benefits of playing with a modern full-back?
Playing with an attack-minded full-back allows the winger or wide midfielder to move inside and attack more directly towards the opposition’s goal, while also creating overloads in central areas that are likely to be more threatening than those in wide areas. Modern full-backs also provide an option to attack around the outside of an opposition block; their high and wide positioning can also stretch the opposition’s back line and create more space in central areas. This positioning can also drag the opposition’s winger or wide midfielder back towards their own goal, thereby limiting their own attacking threat.

If a coach asks the full-back to contribute to both the attacking and defending phases of the game, but the player isn’t capable of doing one or the other adequately, the team can suffer. The position requires immense physical capacity, particularly in terms of speed, stamina and endurance; if the player selected cannot keep up with the pace of the game, their team can be left with serious deficiencies at one or both ends of the pitch.