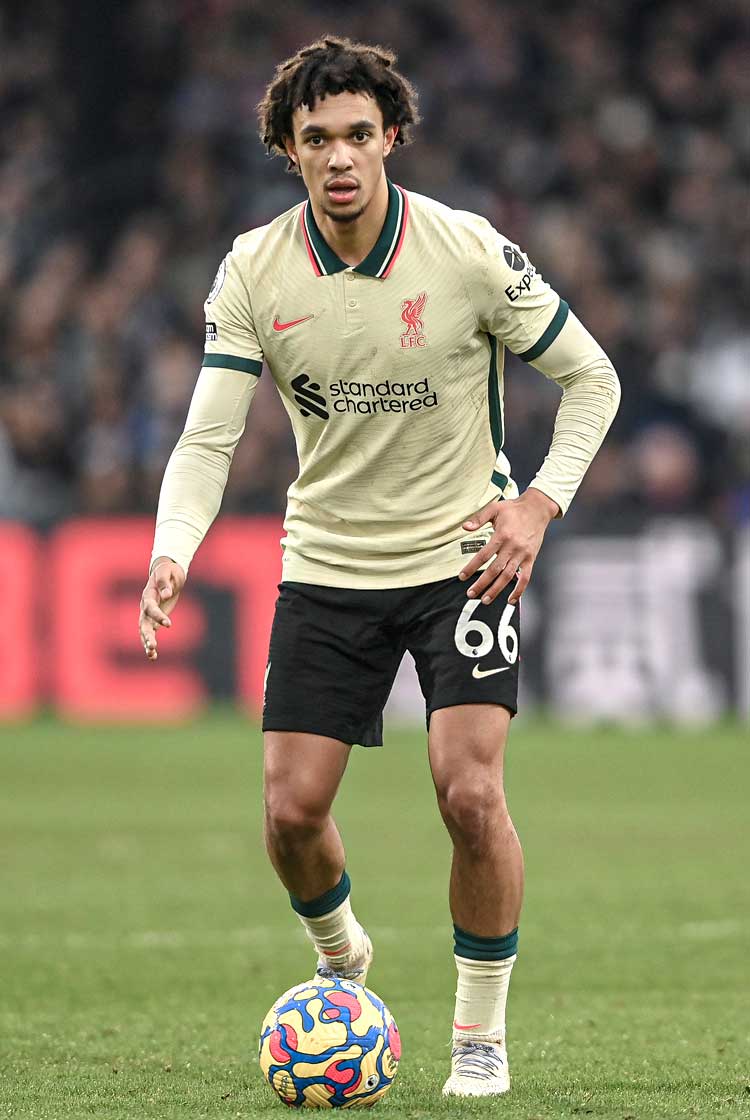 Alexander-Arnold grew up playing in central midfield, and that experience has helped him become one of the most technically gifted right-backs of the modern era. Despite playing in defence, he registered 12 Premier League assists in 2018/19, 13 in 2019/20 and, to date, 10 in 2021/22. In short, Alexander-Arnold has been among the best creators in English football for years. His manager says he is far more than just a defender, and his role is developing still further as he grows in maturity.

“Of course, he is still in the right-back position to defend especially,” said Klopp. “[But] then he’s a right winger, then he’s an eight, a six, a playmaker. He’s a lot of different things for us. He obviously plays different positions on the pitch more than in the beginning because he’s just a much more mature player.”

The most impressive aspect of Alexander-Arnold’s game is his crossing. He has brilliant technique, and can vary his crosses depending on his position to pick out a specific teammate with devastating accuracy.

The speed at which he releases the ball is crucial. He puts balls in quickly, often on his first or second touch, without sacrificing quality or accuracy. His crosses particularly test defences when they are moving towards their own goal and there is space between the defence and their goalkeeper. Alexander-Arnold aims for this space and Liverpool’s attackers make runs into that gap (below). Even when he delays until after taking a touch – usually to control an aerial ball – the time between his touches is kept to a minimum. His control is so good that he can still deliver into the penalty area before the opposition are set.

Alexander-Arnold's crosses are effective whether played high or drilled low across goal. His low deliveries are often the more eye-catching because he uses his laces to strike the ball – almost as if he were shooting – and slice through the opposition to find a teammate (below). Such crosses give the receiver the chance to shoot first-time, and only need guiding towards goal because there is already so much pace on the ball.

He sometimes overlaps and crosses from near to the byline, but he is at his best when delivering from deep. David Beckham lacked the dribbling ability or pace to beat an opponent, but could bend the ball out of the reach of his closest marker. Alexander-Arnold – like fellow England full-back Kieran Trippier – has that same ability, using technique and quality rather than acceleration to evade his opponent. On the opposite flank for Liverpool, meanwhile, Andy Robertson is far more athletic. The Scotland captain finds space to cross through penetrative runs, either with the ball or after running on to a pass.

Alexander-Arnold is a huge asset at attacking set-pieces – not only for his crossing, but also for his shooting. He is composed and reliable in big moments, and can produce the perfect cross in high-pressure moments. He did so memorably for Divock Origi, in Liverpool’s sensational Champions League semi-final comeback win over Barcelona in May 2019.

Alexander Arnold is calm and capable in possession. He can combine with a central midfielder with a short pass, but his long-range passing is so accurate that he can play a killer ball all the way from right-back. He curves long passes forward for Mo Salah to chase in the right channel, but is just as dangerous when switching play to the left wing or playing a long, diagonal ball over the opposition right-back. More recently, he has started moving into central positions, from where he can lift the ball over the top for the forward to chase (below).

Final-third threat
In Jürgen Klopp’s preferred 4-3-3, Alexander-Arnold and Robertson provide Liverpool’s width. Salah makes numerous runs into the right inside channel and Sadio Mané does the same on the left. The primary aim is to get Salah or Mané in behind the opposition and in on goal. Alexander-Arnold and Robertson maintain wide positions and carry a threat on the wings. Along with the front three, they often create a front line of five for Liverpool to attack with.

Alexander-Arnold constantly looks to get into a position to cross, and he is regularly able to do so because of the quick, accurate passes fed into him. He often receives the ball beyond the opposition’s midfield, having advanced as play builds on the opposite flank.

When Liverpool build play, opposing defences are naturally preoccupied with the threat they pose in central areas. They thus focus on preventing passes into the front three, which often results in the full-backs being left open to receive. While the number 9 – usually Diogo Jota or Roberto Firmino – drops deep, the two wide forwards pin their opponents back by threatening the space in behind. Liverpool’s full-backs then advance into the space left (above).

Alexander-Arnold tends to look for the ball to feet – in contrast to Robertson, who likes to receive on the run – and will usually look to play the ball forwards. He is adept at finding Salah’s runs into the right channel by clipping the ball down the line into space for the Egyptian to chase (below). Those passes, as well as his switches of play to Robertson and diagonal balls that look for Mané, are hugely important in Liverpool being able to stretch opponents.

Liverpool play brilliant football and like to keep the ball on the ground where possible. But they also recognise that there are times when it is better to go direct, and they have plenty of success in doing so. When Salah and Mané are tracked, however, space opens up in central areas. Alexander-Arnold has the ability to find a teammate’s feet through the middle of the pitch but, as already stated, has also started moving into central positions himself.

He has experience in central midfield and is good enough on the ball to add value there – at least temporarily in Liverpool’s build-up play. However, this new, narrower position also gives him a different angle to cross from. His deliveries from out near the touchline often require much more power, whereas his crosses from central positions are more delicate and bent around the opposition centre-backs.

One notable advantage of this new position is that in this area of the pitch, the pass prior to a cross tends to be played backwards. Most backward passes in the final third act as triggers for a defensive line to step up and gain a few yards. So, as the pass is played back to Alexander-Arnold, the opposition’s defence are likely to step up, and he has more space to aim his cross into, particularly if he delivers first time. At Manchester City, Kevin De Bruyne and João Cancelo take advantage in a similar manner.

Alexander-Arnold’s central position also gives him a key role when Liverpool switch play from left to right. If the ball is played through him, he has the ability to move the ball out to the right flank, but can also slide through balls in behind for Salah, Mané or Jota to chase. His new role is well suited to playing with a number eight who is happy to move out to the touchline, such as Harvey Elliott (above).

Few other full-backs provide as constant an attacking threat as Alexander-Arnold. With so much of his career ahead of him, he will continue to improve. That is some prospect for both Liverpool and England.