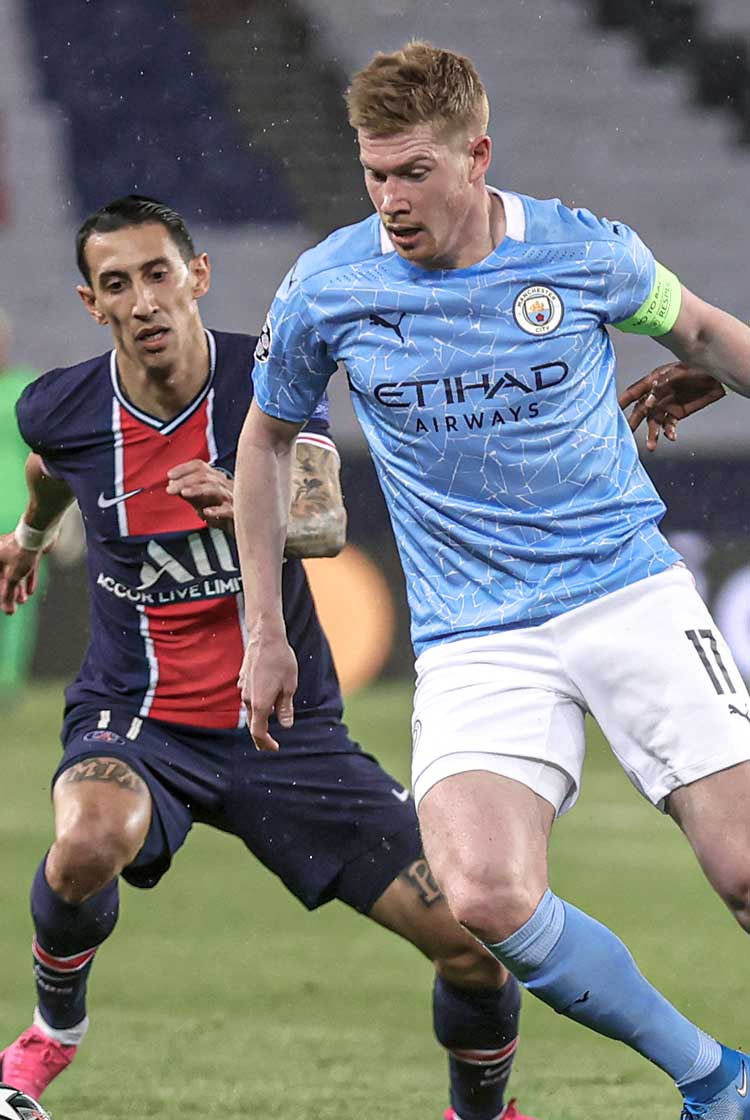 A mezzala is a wide central-midfield player in a trio or diamond, playing outside and ahead of a single, deeper midfielder. This role is usually reserved for a creative, mobile player who is given licence to get forward and support attacks, but still has plenty of defensive responsibility. The term mezzala has come to denote – in English, at least – a modern variant of the box-to-box midfielder or the number 8.

Where does the name mezzala originate from?

In the W-M formation that was particularly prevalent in the 1930s, Italians often described the role of the two midfielders closest to the front line as the mezzale – the plural of mezzala. The term is a blend of the words ‘half’ and ‘winger’ due to the wide positions the two mezzale originally took up. In more recent times the role has become a specific position in central midfield, although movements out wide are still important.

A mezzala can play a key role in driving the team forward with penetrative running and passing. They create through the inside channels via vertical passing and making forward runs, both beyond the attackers towards goal and into wider positions on the outside of the forwards (below).

A must for a mezzala is significant technical quality with both feet, as well as strong decision-making skills when it comes to how and when to release the ball. The ability to use disguised passing and quick combinations to break through crowded areas are also key.

A mezzala also needs to be athletic and able to cover ground quickly with powerful, driving runs through midfield, so they can take advantage of any spaces that open up in the opposition’s shape. Equally, they need to be agile enough to make short, sharp movements through compact midfield areas, particularly when under pressure from the opposition. The combination of all of these skills means a mezzala should be able to help break a press and play a part in quickly turning defence into attack.

An added bonus for any mezzala is the ability to put dangerous crosses into the penalty area. After making a run out into a wide position, they are then able to create chances for teammates.

Energy and tempo are crucial to a mezzala’s out-of-possession work. If playing behind a lone centre-forward, they are often required to press alongside that forward and put pressure on the opposition’s centre-backs. If the opposition plays past them, they are then needed in midfield, so need to make a quick recovery run to make up the numbers in deeper areas. When playing behind two centre-forwards, their job is to cover and screen central passing options to prevent the ball being played into midfield.

If the mezzala is playing as part of a midfield three behind a narrow front three, then pressing the wider spaces when the opposition plays around the first line is their responsibility. Stamina and lots of short, sharp shuttle runs are integral to this.

Equally, game intelligence, awareness of where the opposition will look to progress, anticipation of their movements and good decision-making as to when to press are all important, too.

Who are the best players in the mezzala role?

Kevin De Bruyne
Kevin De Bruyne is a sensational mezzala in Pep Guardiola’s 4-3-3 at Manchester City, for whom he uses his crossing ability in an inside-right position to great effect (above). Many of his deliveries are hit first time after receiving the ball in a supporting position beneath the winger or an advanced full-back. De Bruyne’s movement into wide areas creates plenty of chances; from there, he delivers with pace and accuracy as the opposition back line looks to step forward.

Sergej Milinkovic-Savic
Sergej Milinkovic-Savic has operated as a more direct threat as a mezzala for Lazio. In their 3-5-2 formation, Simone Inzaghi’s team counter-attack quickly and incisively, with Milinkovic-Savic helping to progress the ball forwards through quick combinations and movements into wider areas. He is also tasked with adding another body to attacks with supporting runs from midfield (below).

Which other players are examples of a mezzala?

What are the benefits of playing with a mezzala?

A mezzala can help to exploit gaps in the opposition back line with through balls, penetrative runs into a gap between a centre-back and a full-back, and via intelligent positioning to receive high up the pitch.

Movement ahead of a full-back can add more variety to attacks, with overlapping runs that allow the winger to cut inside with the ball or create space for underlaps from the full-back. The movement and energy of a mezzala in central areas can add an extra threat to counter-attacks, in particular in how they support centre-forwards and wingers.

The sheer variety of their movement will help to make their team less predictable, with teammates free to move into less orthodox positions both on and off the ball.

What are the disadvantages to playing with a mezzala?

The runs that the mezzala makes ahead of the ball can leave gaps behind them, so any team will require both balance and discipline from the rest of the central-midfield unit. Meanwhile, if the mezzala has drifted into a wide position during an attack, opportunities to counter-press centrally following a turnover may be harder to exploit than if they had remained central.

A mezzala is less defensive than a pure box-to-box midfielder, so recovery runs against a counter-attack may be less frequent, placing more defensive responsibility on the other midfield players.